During the winds I lost my roof on the wood store when I inspected it the whole store needed replacing as it had been up for so long. So long in fact that when I first built it I did not know much about woodwork. As can be seen from the amount of roof support I had.
It took just over two days to empty all of the wood from there, I was surprised at how much, most of it went into the other store which I can no longer move more than a couple of steps into now.

This is going onto a concrete base so no floor needed the lower feather board in protruding below the bottom frame and the two end panel the feather board is longer at one edge to cover the back panel ends. 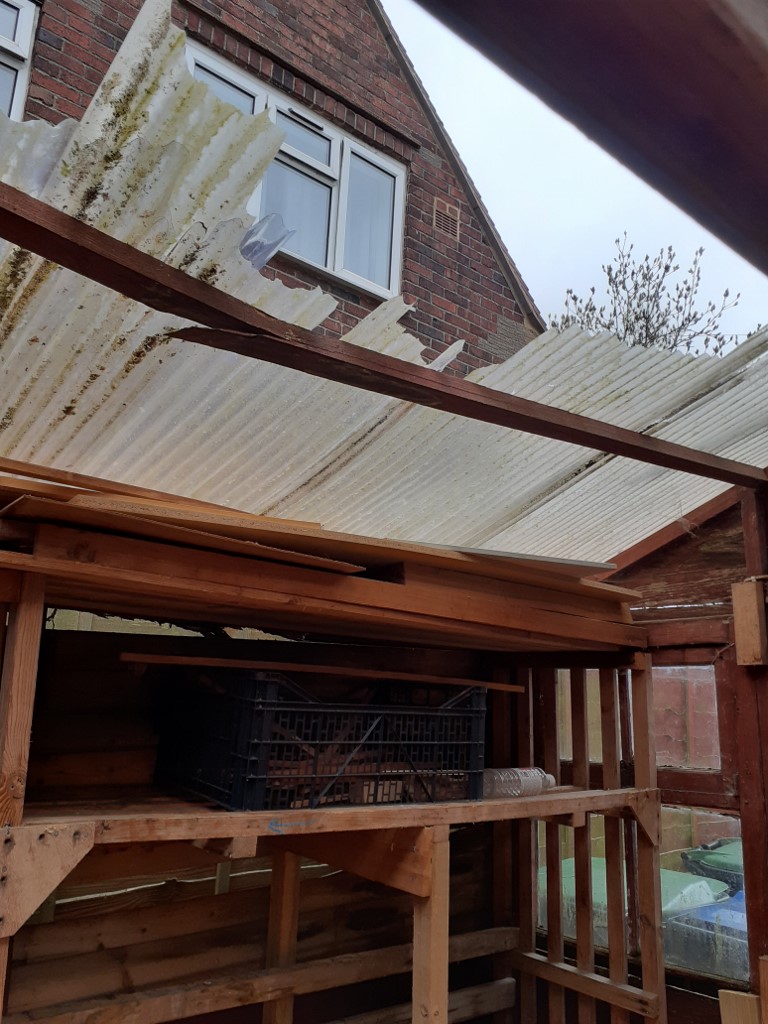 All wood ordered as well as roofing material and progress began just after the weekend as it was raining like mad.
Surprising but for the size of the woodpile for this build that it is enough to complete it except for some guttering which I will be adding. 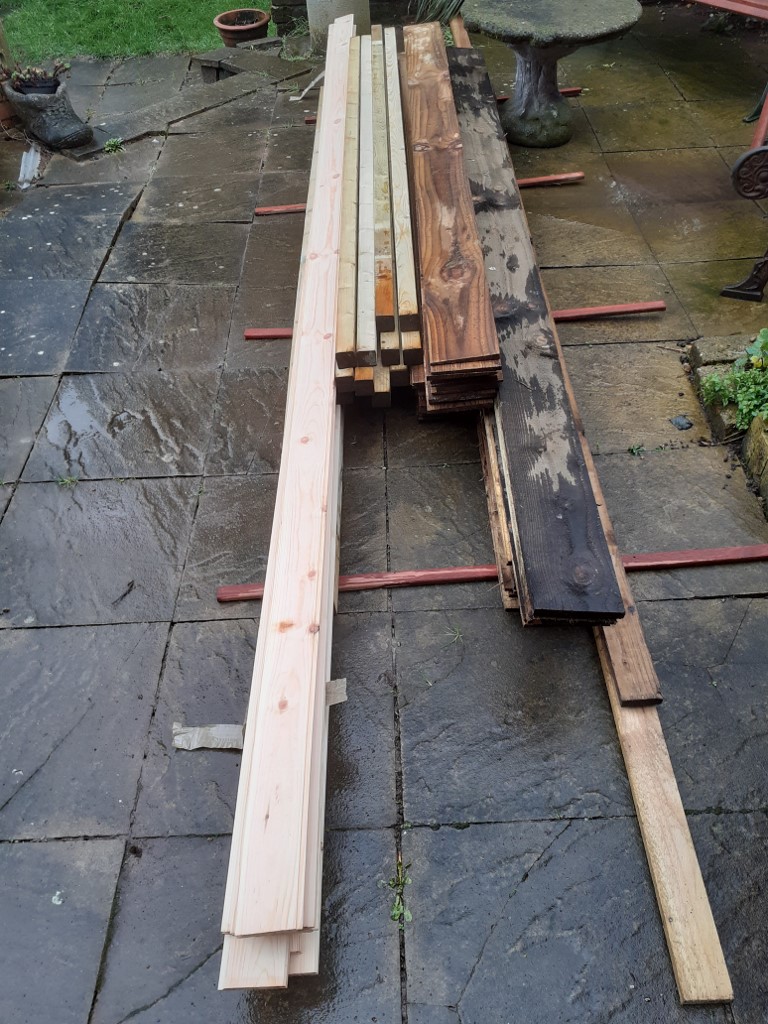 First was the rear panel which was the largest one. 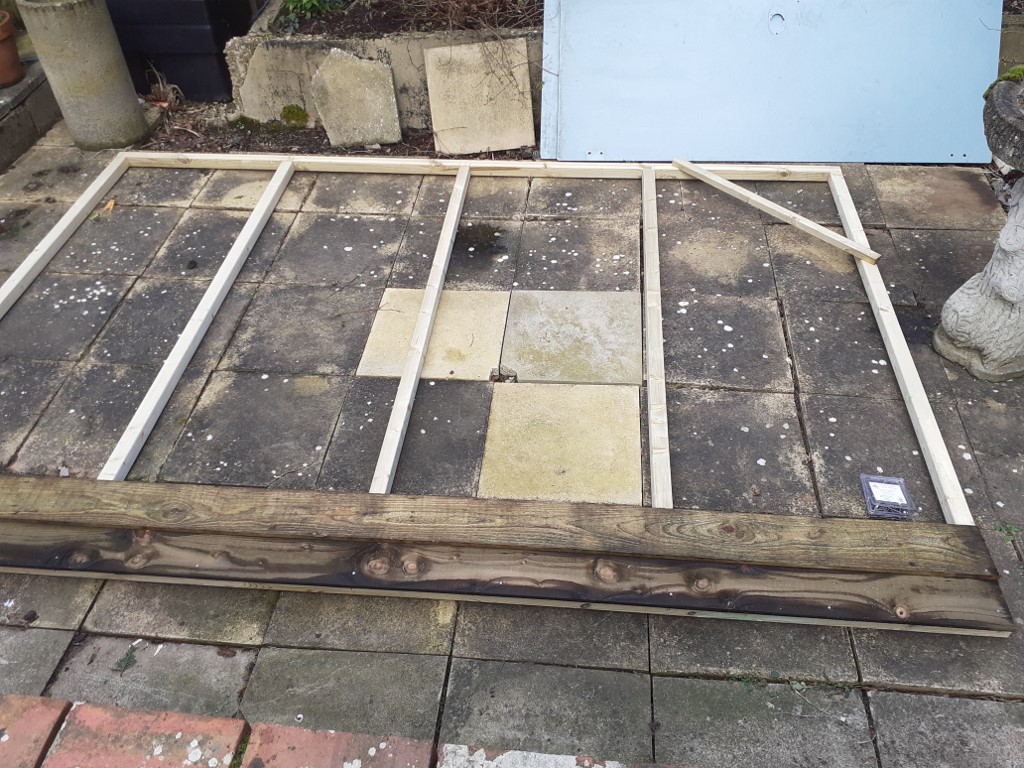 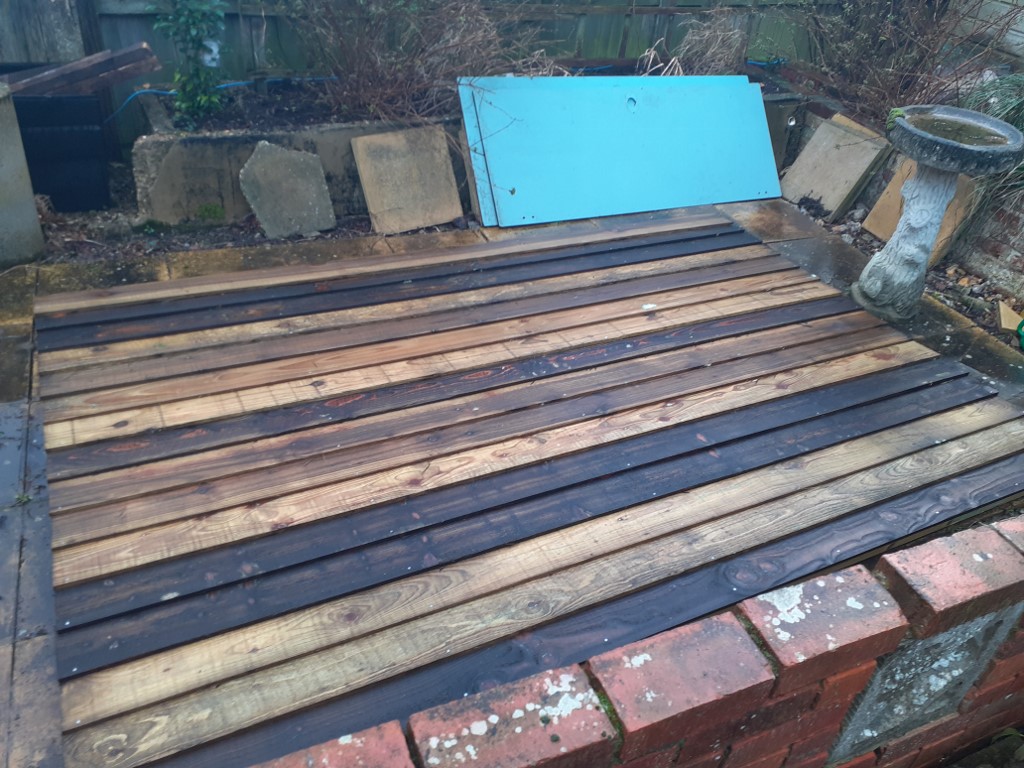 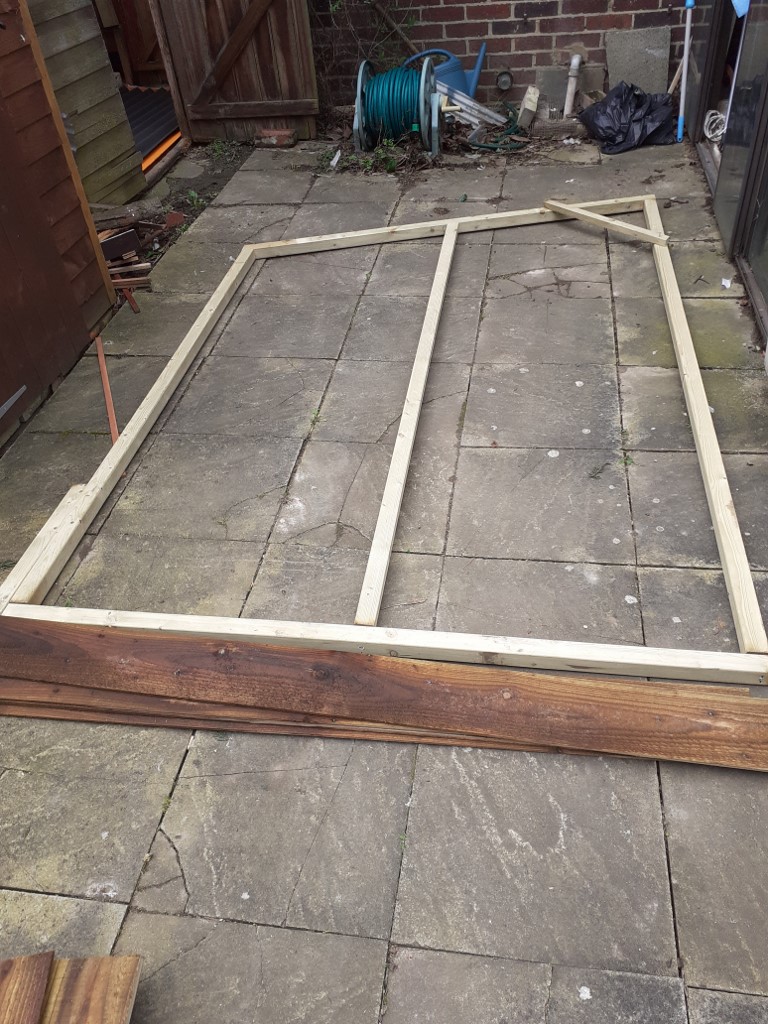 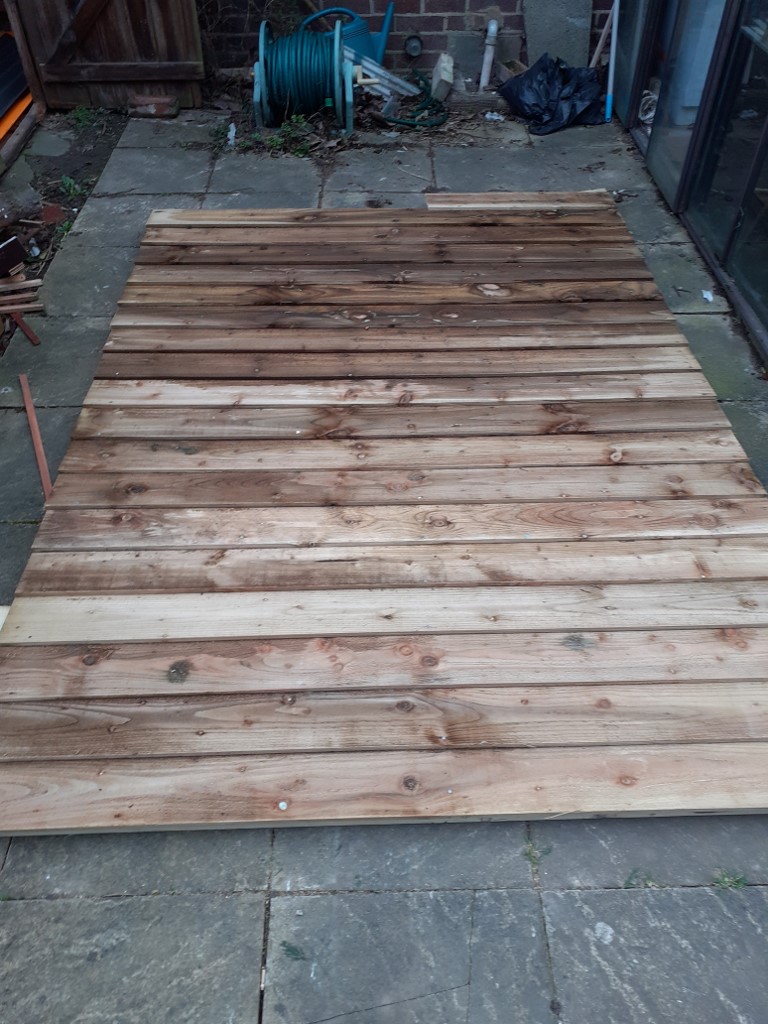 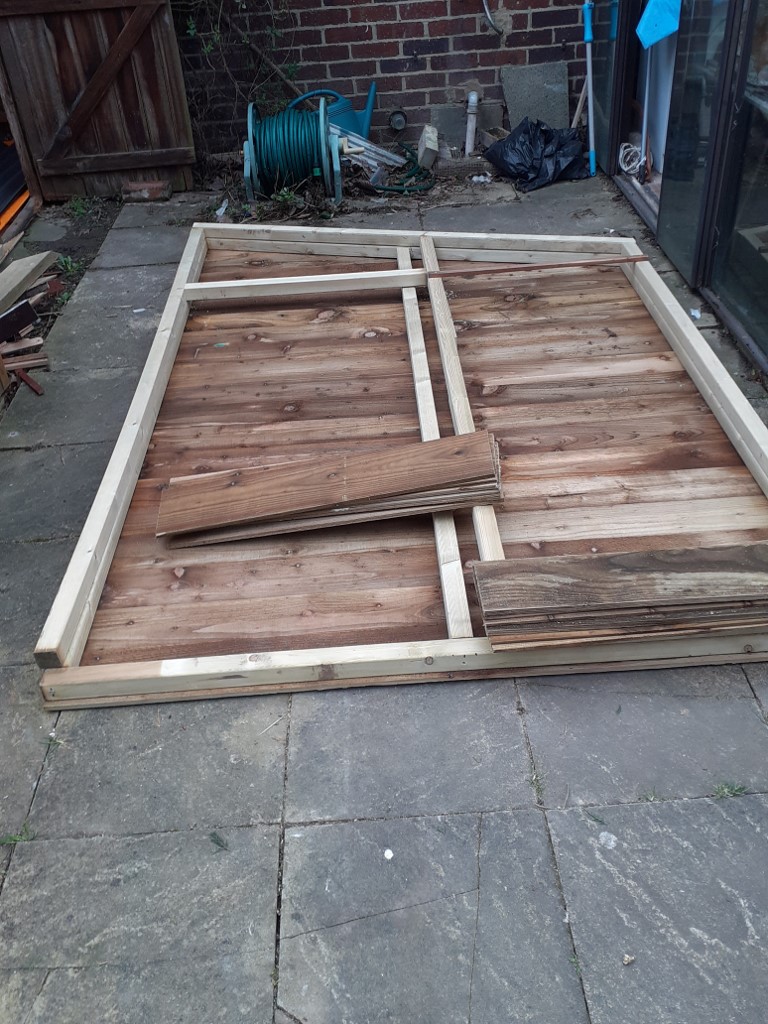 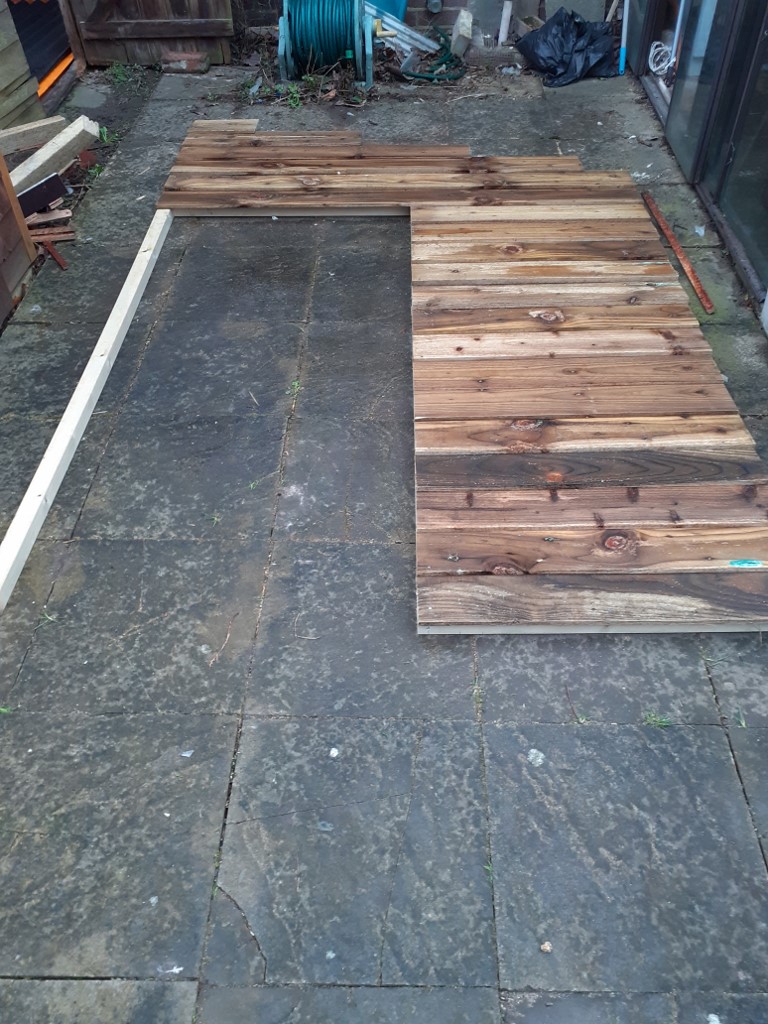 Have not posted much on the progress of the wood store rebuild but I have got all the panels treated ready for assembly as well as make one of the two doors. Today being the first day of no rain and little wind I have dismantled what is left of the old shed and cleaned the decks for the new one to go up.
I have stopped for yet another break as I have to do this in small spurts due to my health, that is why I am able to post this.
By the end of the day I should have most of it assembled, at least the end is getting very close which means that I can empty some of the other sheds and conservatory. This also means some much-needed turning time as I am getting withdrawal symptoms.
I will try to post some pictures latter on
I

As promised photos of today's progress. At least it is at a stage that I can get the roof on and start on the last side. I had a little help from one of the woodturning club members. 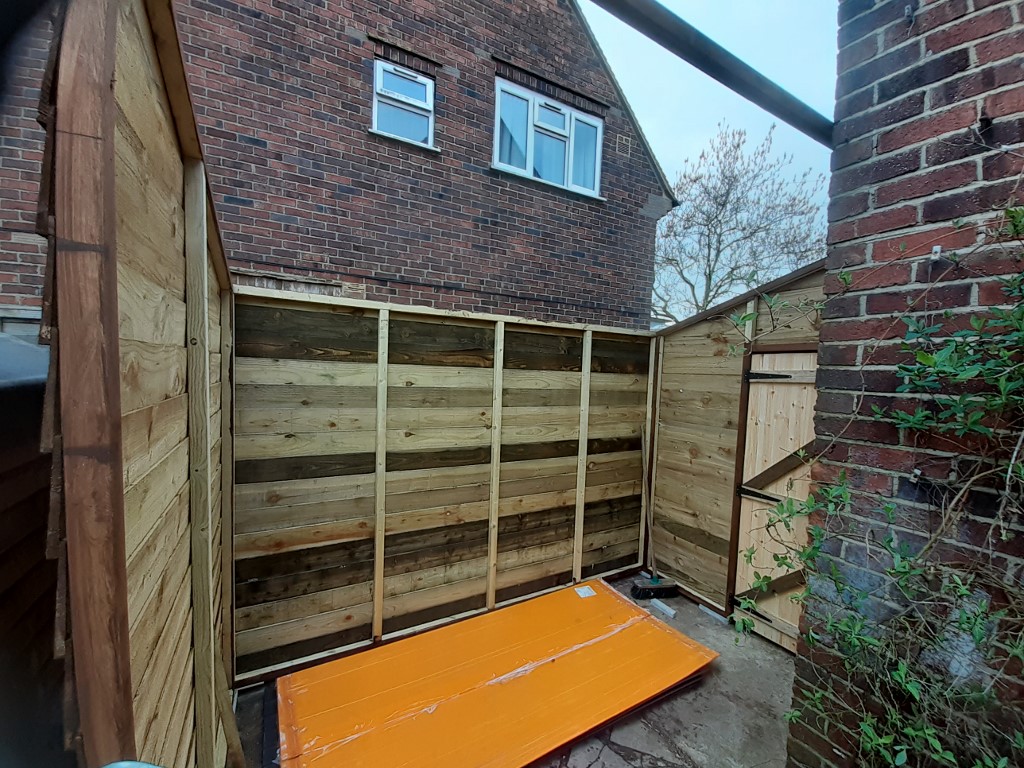 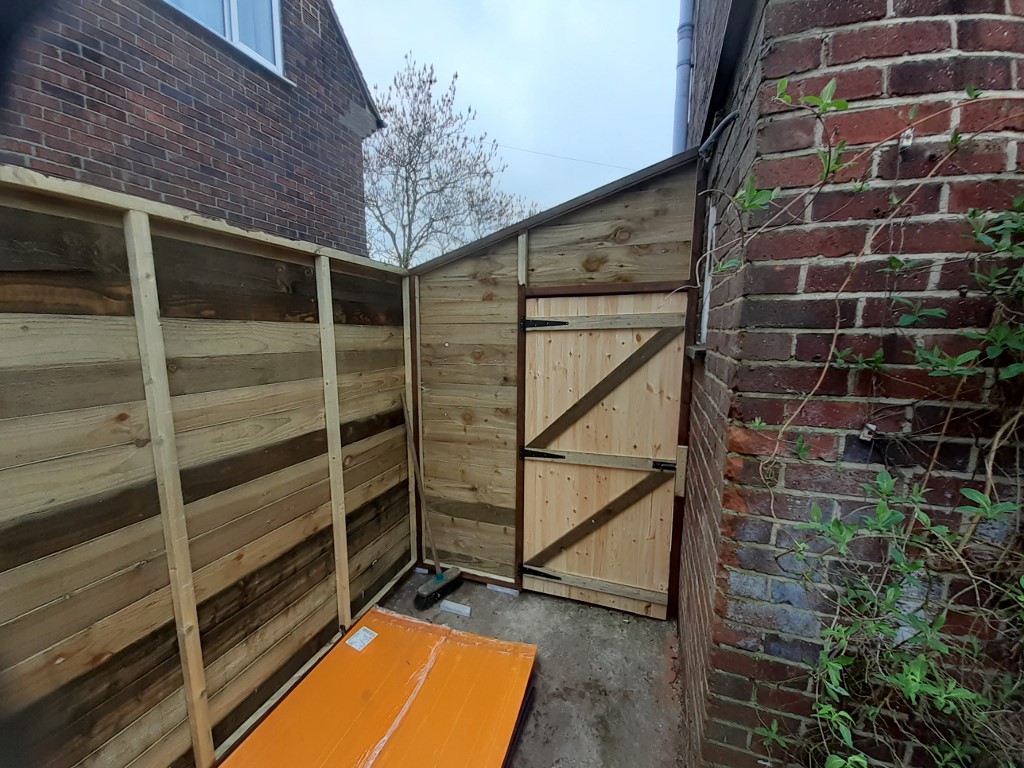 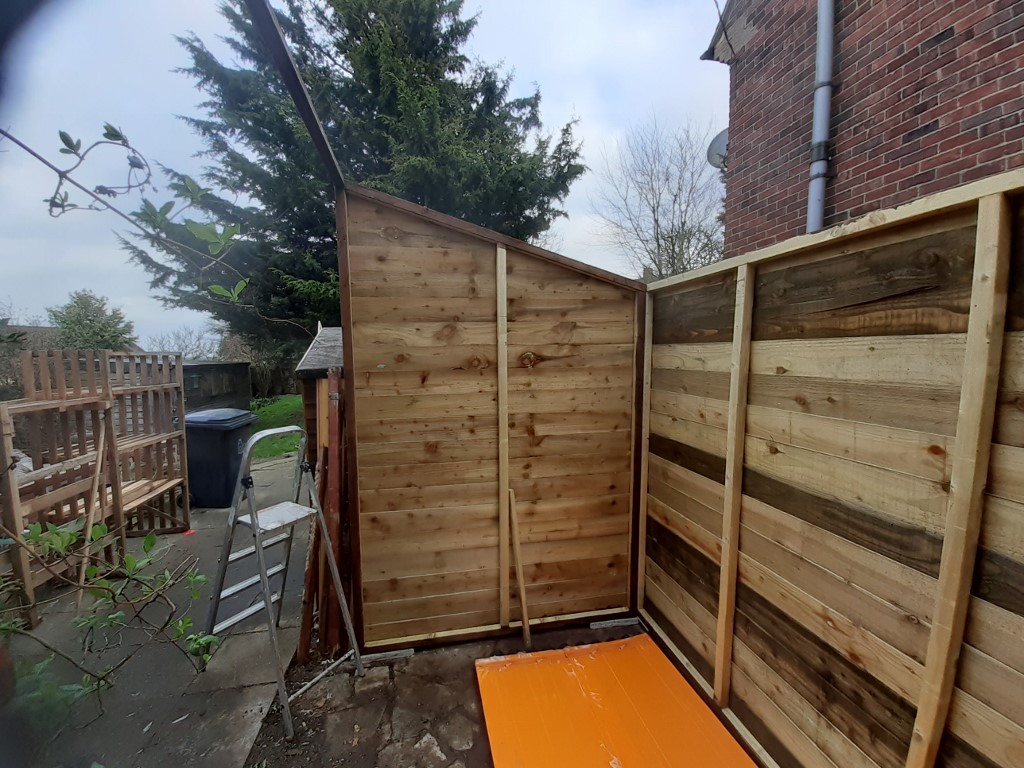 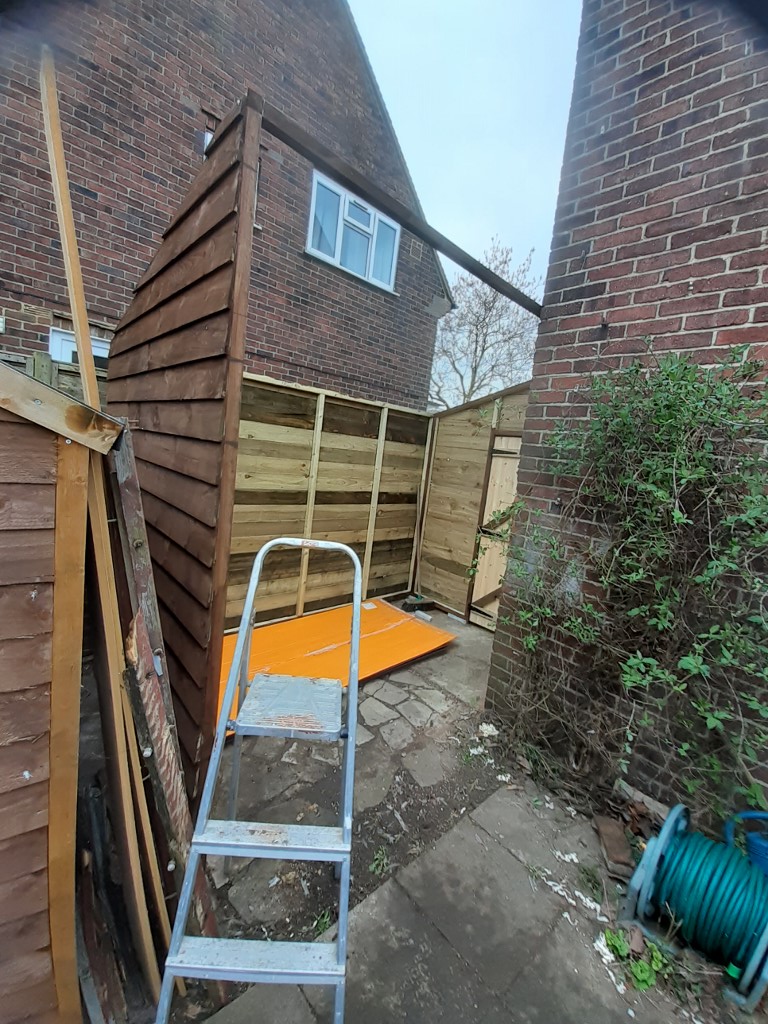 Yet another day on the rebuild with the promise of rain by midday I did not expect to get much done but was hoping that I could at least get the gutter and roof battens on. But luck was on my side and I even managed to get the roof sheets on as well.
Now all I need to do is build the last remaining wall and door. I have placed the old rack in there but it needs a couple of pieces of wood replacing before it is filled up again. 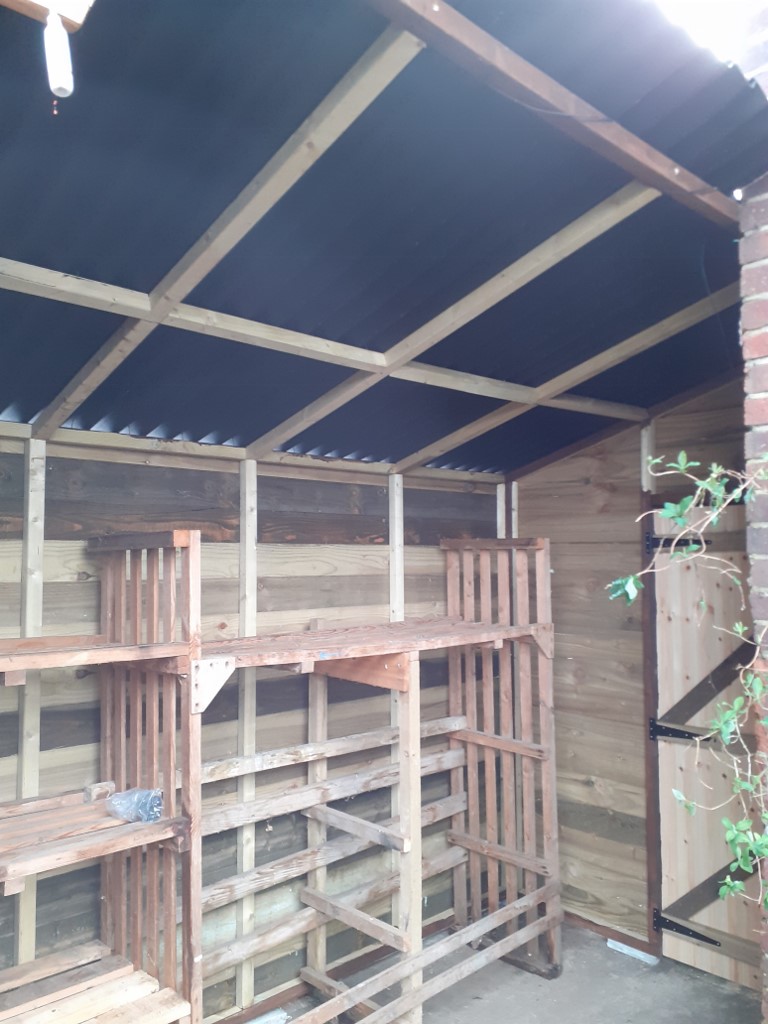 Glad to see you are managing to progress, steady does it, hope you are taking counselling to help resist filling that extra storage space to the brim.

CHJ":1ft24ixp said:
Glad to see you are managing to progress, steady does it, hope you are taking counselling to help resist filling that extra storage space to the brim.
Click to expand...

I already have plenty to fill it but there will be some space left over as I will be having a sort out. Will be glad to clear stuff from the workshop and the other store so I can see what I have as well as get some turning done. This rebuild seems to be taking ages due to weather and health.
The wife just said yes I need counselling as I tend to hoard wood :lol: :lol: :lol: Well you never know when it will become useful. :twisted:

Dalboy":2f9zo614 said:
….
The wife just said yes I need counselling as I tend to hoard wood :lol: :lol: :lol: Well you never know when it will become useful. :twisted:
Click to expand...

It's an inate problem they have I'm afraid Derek, just like the aversion to sawdust and shavings, one of those crosses we have to bear I'm afraid.

Now I am really feeling the end is close the last side made today after having to fight the silly shoppers for the weekly shop, at least with a tool shop there is something worth looking at.

Did not put the finish on as the feather boards are too wet so decided to assemble and fix in place.

The shelf unit is back in properly now ready to be restocked from all the hiding places.

Taking a day off tomorrow at the turning club then Sunday onwards I will get the door complete and if lucky start moving everything back and then back to normal. 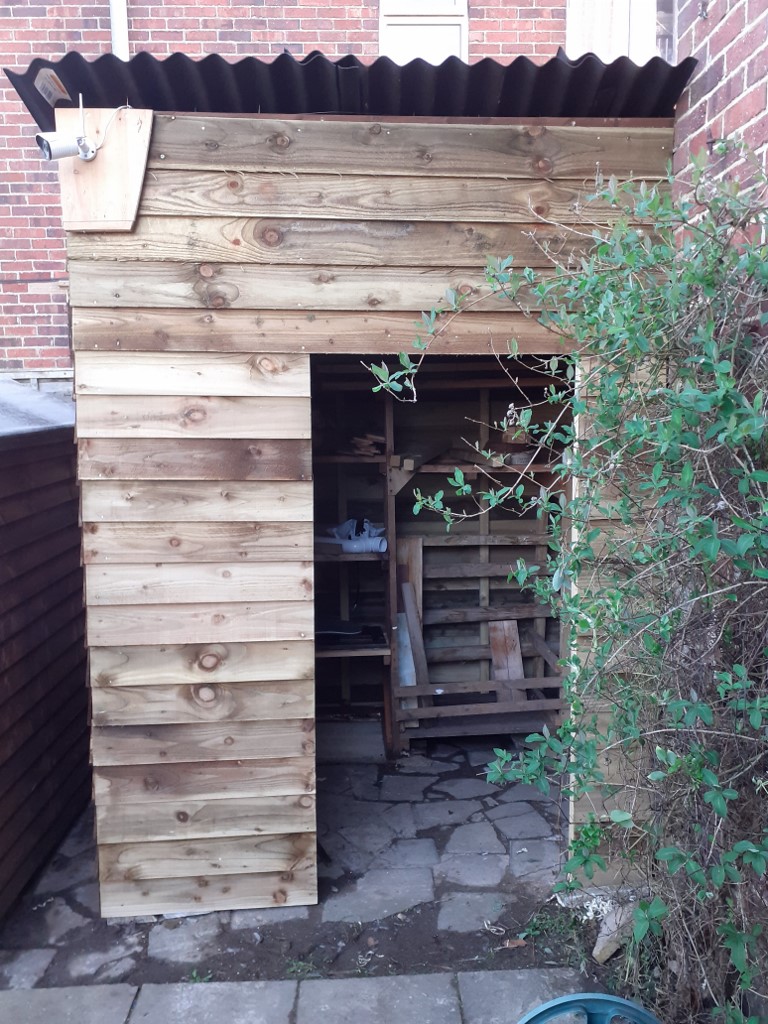 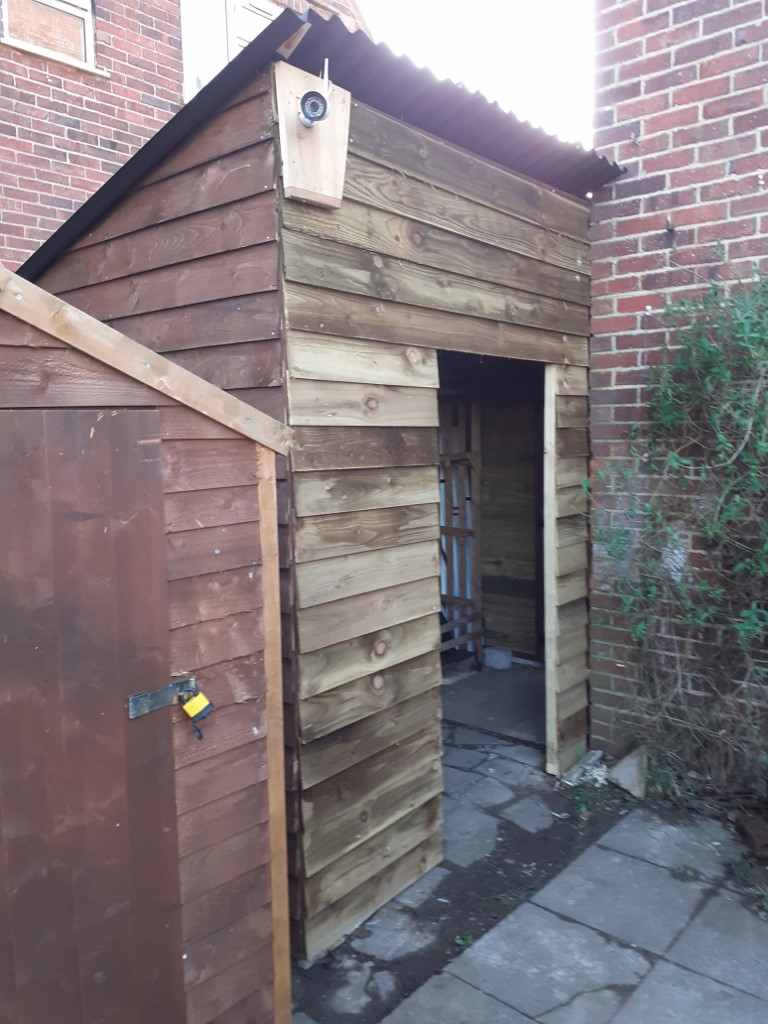 I reckon you're about 15mm over the height allowed under permitted development rights, Derek. Rip it down and start again. :wink:

MikeG.":2zmk0ig8 said:
I reckon you're about 15mm over the height allowed under permitted development rights, Derek. Rip it down and start again. :wink:
Click to expand...

Just cut the roof sheet overhang back will bring it under :lol: :lol: :lol:

Last door completed today have not taken a photo. Hopefully will get a finish on the last panel and door tomorrow as well as add a couple of bends into the gutter downpipe.
Then it is the job of moving everything back into this store may even throw some wood out
I have managed to clear the conservatory and my workshop.
B

Looks good! [THUMBS UP SIGN] How do you stop rain running down the wall of the house and getting in? Or do you just not store things on that side?

Sent from my COL-L29 using Tapatalk

Brian18741":1u332rv8 said:
Looks good! [THUMBS UP SIGN] How do you stop rain running down the wall of the house and getting in? Or do you just not store things on that side?

Sent from my COL-L29 using Tapatalk
Click to expand...

That is something I will need to look at which is what I did forget but nothing is stored on that side and it is only a wood store as you can see the rack is on the opposite side.
Ine thing I did was to raise all the wooden parts off of the ground there may be a little water coming in under the walls but not enough to worry about, if it was a workshop then that would be done totally different and everything sealed.

Today got the downpipe fitted for the gutter. And then started to move in some of the wood. I have decided to leave the turning blanks in the other store and move mainly the flatwood into this one. Also things like part turned bowls, LV bowling balls burrs and exotic woods.

Still need to apply the finish to this panel and door. I will be sorting the wood out into wood types rather than having to hunt for a piece. 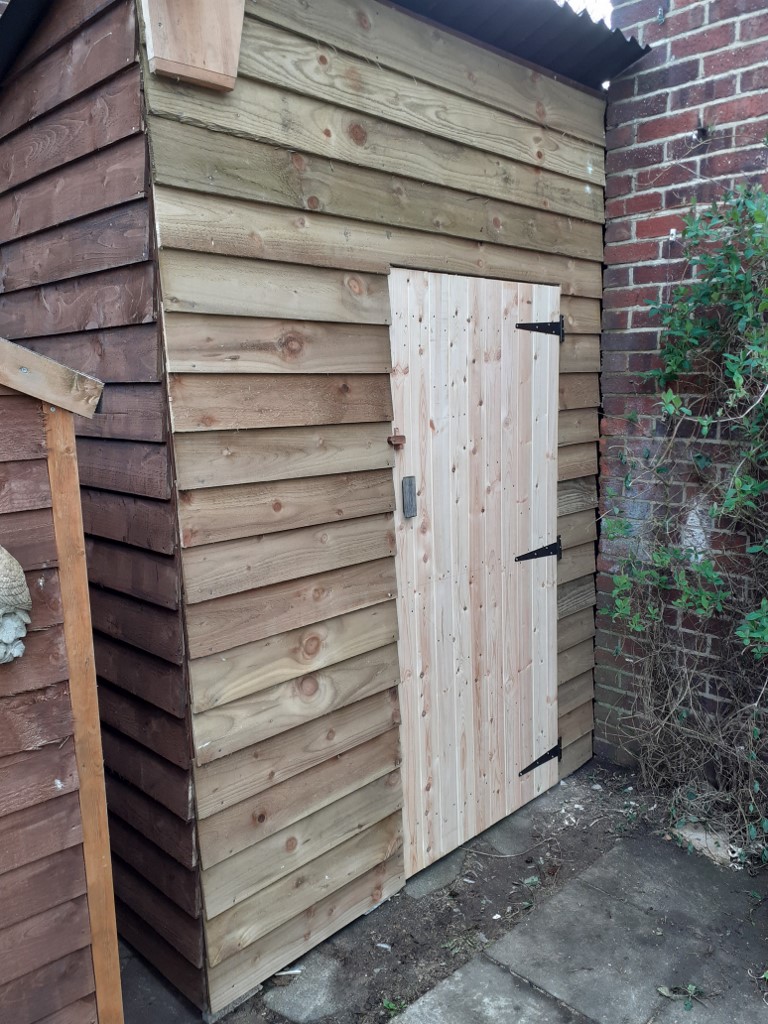 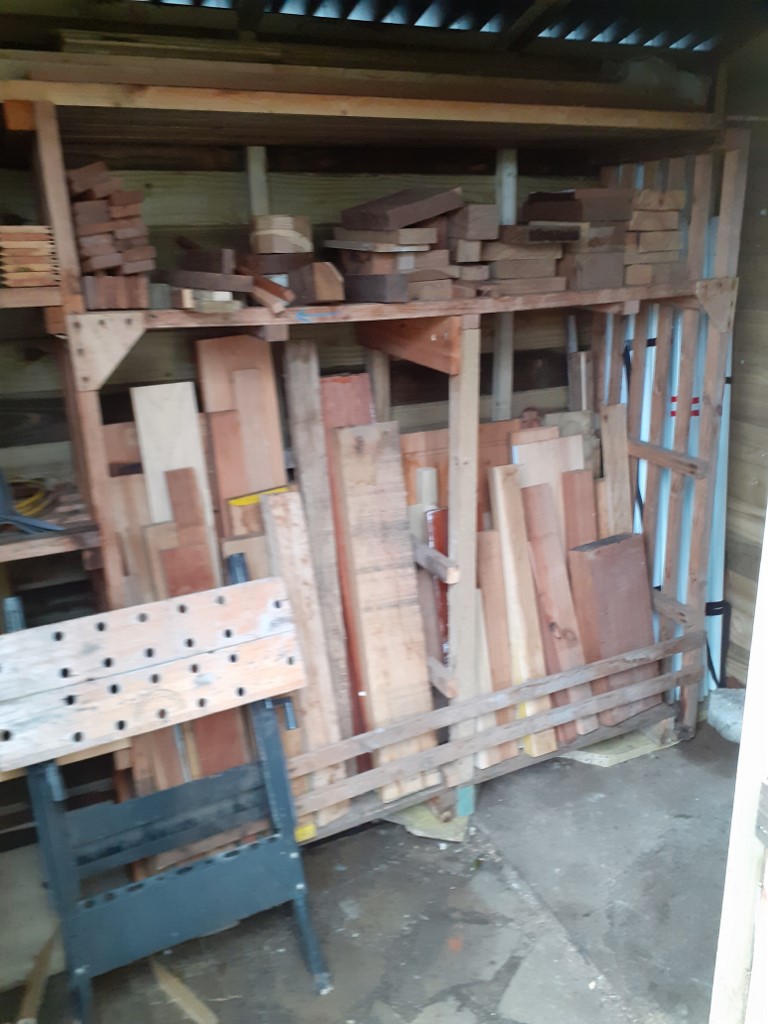 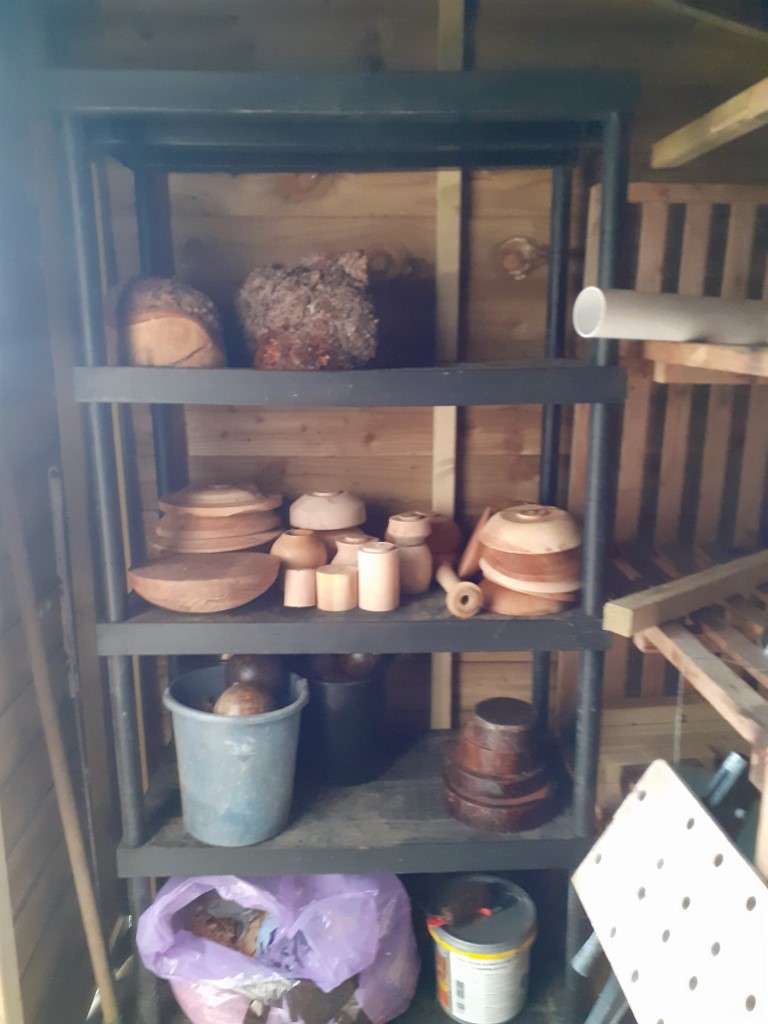