Which Rasp For This Curve (drawing included)

I've got quite a big order for sash windows at the moment, and with this is a large number of horns.
Usually I've roughed out on the bandsaw and used sandpaper to finish but this time I want to try using a rasp to both speed up the process, and get them more consistent. I've read a little about them and I'm quite unsure which would be the best to go for, and how many (as few as possible) I will need to do the job well. I've attached a drawing below so that you know the dimensions of the piece. I need them by the weekend so will be placing an order tomorrow hopefully.

Sorry I can't see how a rasp is going to make that job any quicker, practice with the bandsaw, you should be able to cut to the line and just a few swipes with the sand paper job done.

the best method i could think of is a router cutter or a spindle moulder, very easy and very repeatable, use a piece of wood for sacrificial purposes and hopefully it should be break out free

I was going to say - that's moulding isn't it? Usually achieved by plane or spindle? Depends how many there are to do I s'pose.
A rasp as a precursor to sanding would have to be both curved on its face and bent in its length I should think.

The detail being asked about looks like this in the solid:

so is not a moulding as such. A router would not give you the re-entrant corner. So as said, the usual technique is to bandsaw then sand. A good rasp would give you two options. You could continue to bandsaw as close as possible, then use the rasp instead of the sandpaper to clean up any saw marks. Or, you could take a straight cut across the corner and use a rasp to sink the curve below the resultant flat cut surface. Either way, the answer is a half-round rasp.

The hand-made Auriou ones are said to be the absolute best - there have been several threads on here about them; Classic hand tools have them at 10% off this month. The other alternative is a Japanese made rasp which has a different sort of tooth - more like a series of little blades rather than points. Available from Rutlands and elsewhere. I have a flat and a round one and have found them very good, leaving a smooth surface even on softwood, but I think they would be a bit small for a job like this.

However, all this assumes that you tackle each one on its own, and I don't think that is the handwork way. I have a reprint of an old book on window making from around the 1920s and it says:

"the ends of the stiles should be finished with brackets, cramping up all the stiles and working all at once"

The pictures show that these brackets are what we are calling horns. If you have a batch clamped together, the obvious way of working would be a saw cut to define the shoulder, followed by planing across, first with a rebate plane and then with a broad round (preferably a skew round.) A big hollow might help, but I think the profile you have drawn would not need one.
You'd get a smooth surface and they would all match.

If you wanted to use a rasp on the batch of stiles, you'd need a very long rasp or one with a cranked handle .

Sorry, I cannot see any way that a rasp, no matter how good, is going to speed that up.

Having a couple of saw handles to make recently, I invested in a couple of rasps from Workshop Heaven - the continental hand-stiched ones, an 8" No2 and a 6" No5 cabinet rasps. They are very impressive tools; fast cutting when used aggressively, but capable of much finer surface finish used delicately. The cabinet rasps have a 'flatter' curved face than the half-round ones, and I could have done with a tighter curved rasp for some of the interior curves, but by skewing the rasp, it's surprising what they can be persuaded to do. I was worried that at 8" the longer one might be a bit short, but it's so fast and clean cutting that it's lack of inches doesn't matter, and it's light and easy to control.

They cut very cleanly, and the smoother one leaves a surface that just needs working through the grades of sandpaper to finish. They also come fitted with very comfortable handles if you choose that option. I found that a small nailbrush worked quite effectively to clean them up after work. I was so impressed with them that I added a couple of round ones to the kit.

I'm not usually a fan of 'fancy' tools, preferring the straightforward and decently made, but was very impressed with these. I'd happily recommend them. They're not cheap, but are less expensive than a couple of other makes already mentioned above.
R

Yes Andy - I was assuming they would be lined up together and treated as a big old moulding. Would also prevent each others tear out except the last one .. if that hasn't already been said.

And "cranked" was what I was struggling for when I said "bent" .

For the rasp route, during my recent handle makings I've found that when using a half round rasp on a slight curve, it has the tendency to dig in to the slighter curve with its greater curve - so have been using narrow, (1/2" ish) flat files and rasps in diagonal strokes to greater effect; on both convex and concave gentle curves - just the sort of curves required here in fact.

The curve on the inside of this handle I did with a narrow, flat rasp for instance:

I've yet to try/ buy the posh, hand stitched rasps but I will eventually.
C

Richard T":11y5qsb4 said:
The curve on the inside of this handle I did with a narrow, flat rasp for instance:

I've yet to try/ buy the posh, hand stitched rasps but I will eventually.
Click to expand...

With results like that I'd suggest you carry on doing precisely what you're doing now! That looks very nice indeed =D>

Rasps are undoubtedly superb for jobs like those handles, but I would have thought that a 1st class, correctly chosen bandsaw blade would be quickest. How long are those horns going to take to cut? - a minute or two with 100 grit, and they're finished..... unless you're going to french polish your windows.

I really loike rasps esp. the ones I get from e canadian member and the Liogier rasp I tested when I met Klaus. After the Rasps I would give coarse files or micro planes or the japanese files a chance. They give a perfect finish for sash work.

As was said already. Get yourself a cutter made for the spindle or make one youself. (i have a thread in gen woodworking on how to make them.) Clamp 12 stiles together and a waste piece at the back and run through the spindle. Job done, no sanding rasps or bandsaw. The square cut at 64mm I would cut on the saw to get a clean shoulder. You can do this also when they are clamped together. This method is way faster than the traditional method. Will speed up your production nicely.
C

Teckel":2fxpjmj2 said:
As was said already. Get yourself a cutter made for the spindle or make one youself. (i have a thread in gen woodworking on how to make them.) Clamp 12 stiles together and a waste piece at the back and run through the spindle. Job done, no sanding rasps or bandsaw. The square cut at 64mm I would cut on the saw to get a clean shoulder. You can do this also when they are clamped together. This method is way faster than the traditional method. Will speed up your production nicely.
Click to expand...

However, for the occasional one-off, or even for small batch production on an infrequent basis, the tooling costs could exceeed the time saving. There's also the point that dedicated tooling cuts one profile only, whereas hand-tool techniques are flexible.
T

And you have a valid point.
But for a couple of hours work you can make your cutters and you have them for life. It takes 10 mins to mount in a head and your good to go. Might be only a small batch this time around but you could have 50 or 60 windows to do for the next job. A lot of architects are not picky about this kind of detail..so it can be used again and again.

We seem to have silenced the original poster - are you there Matt? What did you decide to do?

I'd tend to address this type of task by ganging the pieces together and (If not using a router) producing the curves using a suitably set hollow or round plane after rebating the bulk of the waste away. So much depends upon detailing and dimensions/scale being worked to.
M

Thanks for all the helpful replies so far. I haven't done any thing yet as I have been having spindle moulder trouble. With regards to using machinery to complete this, I'm not really interested as these are to match in with existing windows so chances are I won't be replicating them.I would like to improve my hand tool skills for curves so this seems like a good place to start. I was planning in finishing the curves as a pair for each vent so if there is any minor deviation it will at least be the same the other side. I don't own any hollow or round planes, but I can see this would be an ideal application for them with being able to do several curves at once. Time constraints mean I won't be able to organize a suitable pair for this project but I will be on the look out in future. My bandsaw is awful despite hours of tuning, it looks like it was abused before I got my hands on it, so this leaves me with quite a bit of clean up work hence the original question. I think I will be ordering a 8 to 10 inch half round rasp with a medium grain. If anyone is interested I will post a few wip pics. Thanks
C

I have just done something vaguely similar (although just 4 legs in my case). My choice was partly decided by what I have access to, but also influenced by only having 4 to do. 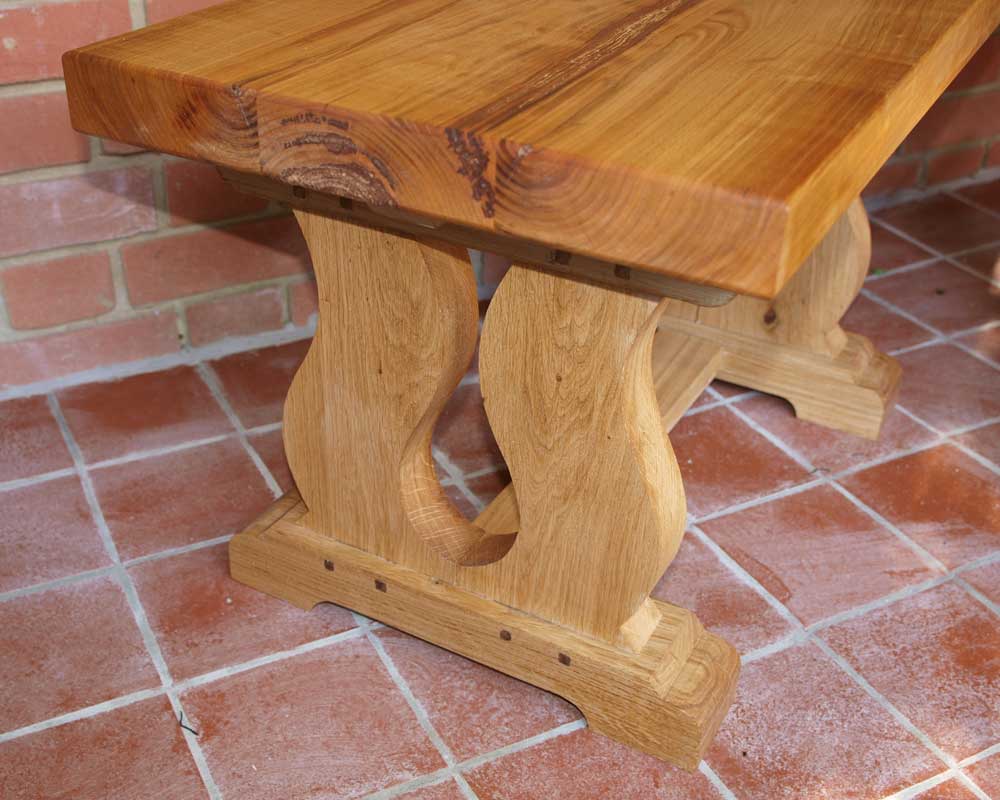 The stock is 45mm oak*. I used my smaller bandsaw with 1/4" 4tpi premium (Tuffsaws), working to a pencil line off a hardboard template. Followed with Liogier rasps no11 followed by no13. All that was needed then was a lick over with a small cabinet scraper.
The hand-stitched rasps are very fast and when you back off the pressure, the 13 gives an excellent finish.
And may I dispel a myth -I seriously challenge the notion that Auriou is the best in the World. The Liogier is every bit as good, a far bigger range and less expensive.

(to avoid confusion, the top is dodgy elm.)