I'm currently constructing a veranda on the front of our house here in France.

Something along the lines of this http://www.gowercroft.co.uk/2011/11/green-oak-verandas-year-round-outdoor-space/
but with a tiled roof to give shade.

My neighbour, who is a carpenter for the local commune, has suggested that the wall plate is not large enough and should be 63x75mm

I don't see the problem, the load will be borne by the wall won't it?

What is the pitch of the roof?

What is the spacing and horizontal span of the rafters?

How will the posts be tied back to the wall (i.e. to stop the whole thing falling away from the house with the roof moving towards the horizontal)?

Is this an exposed location?

On the face of it, the wall plate does sound a bit undersized and I would give some credence to the opinion of the local experienced person.

In a lean-to structure, the posts are only kept upright by the rafters. So the fixing between rafter and wall plate is a critical part of stability.

Yes the rafters will transfer the roof load to the wall plate and thus to the wall, but wind load or indeed someone leaning against a post will impart a sideways load away from the wall.

Also if the verandah roof is a straight run, with open ends, then you may need some diagonal bracing for lateral stability. The tile battens will be nailed to the rafters which will add some stiffness but usually only 1 nail is used at each 'node' and strong winds could make the whole thing move like one of those expanding trellis climber supports.

The oak verandah examples on that link look a bit clumsy to me. I think I would have set the posts behind that top plate rather than in between, also the posts look a bit heavy, the intermediates could be smaller section. I would also fit gutter otherwise it would be constantly dripping during wet weather -perhaps not a concern for those lucky enough to enjoy a Southern French climate!
B

The timber at the top of the roof,is bolted to the wall, we refer to as a pole plate, you're man is correct as here we would use either 7" x 1 1/ 2" or 7" x 2" the depth of the pole plate resisting downwards flexing, and well fixed using expanding anchor bolts or masonry screws, each rafter is usually plumb cut, skew nailed and supported underneath each rafter and further supporting it. with a 2"x 1" batten well nailed
Here's a link, first pic top left, you can use the fixing plates shown instead, as long as they are agrement certified
Night night, and Regards Rodders

Thanks all for the replies. Here is the 'vision'

Horizontal span of rafters is 2.2m. spacing was going to be 0.5m

If you're going with green oak why not construct it using traditional joinery, i.e mortice and tenon?

You'll gain far more strength and rigidity then you could ever achieve with screws;

Andy RV":21dltd8o said:
If you're going with green oak why not construct it using traditional joinery, i.e mortice and tenon?

You'll gain far more strength and rigidity then you could ever achieve with screws;
Click to expand...

Sorry, didn't make myself clear - The frame is made similar to your photos, but my braces are not curved.

The screws are for attaching rafters to wall plate / frame

I'll post a picture later - I've just come in from working in the barn and its 35°C in the shade at the moment :shock:, so I'm not going back out until later. 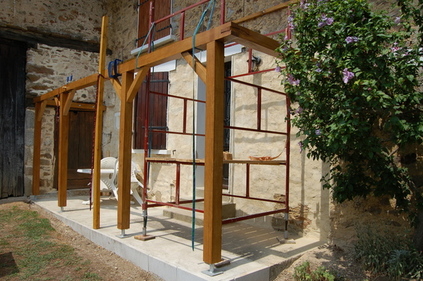 Finished now (apart from tiling the floor, creating a step and covering the water pipes in the ground) 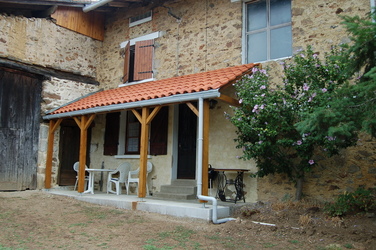 Have to say a really nice job, spoiled by the Gruesome guttering and down pipe!
The roofs look somewhat sheltered and if you need guttering there, I hope you have a good fall for the floor tiles and keep rain water away from the house wall.
Regards Rodders
You must log in or register to reply here.
Share:
Facebook Twitter Reddit Pinterest Tumblr WhatsApp Email Link