Stunning weather, and we'd just got the wine out with the neighbours when next winter's kindling wood arrived - 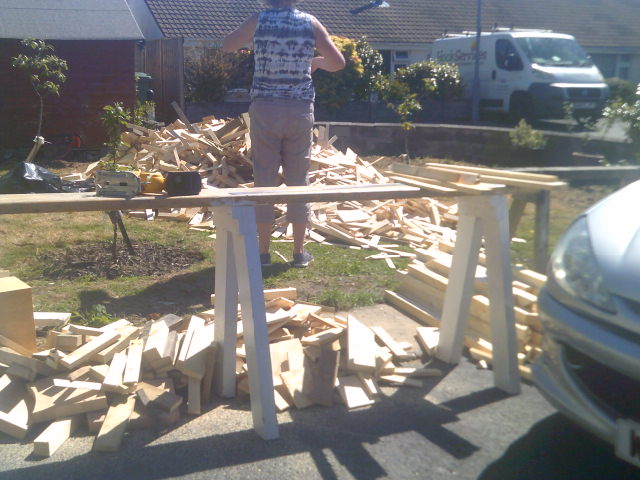 I wish I were this organised. Usually it's me on the phone to the wood man asking how soon he can drop some off because it's "suddenly" become winter time.

They're offcuts from a place that makes roof trusses. I had the chance a couple of years ago to get them, but as they use them for their own heating in the winter I told the guy I'd have a load as and when. We sawed it all barring the stack of short lengths and put it all away this afternoon. My loved one is going to ache tomorrow.

Two days after that a truck load of demolition timber arrived unexpectedly. £50 to heat the bungalow for 12 months can't be bad.

It the end of winter yet my wood stack is still full, with other stacks around. While it is nice weather at the mo, the evenings can be a bit chilly, but I can't actually get at my firewood! Why? I have a lodger called Brenda.
Brenda and her mate Bobby are squatting in my firewood store and have started to make it home... 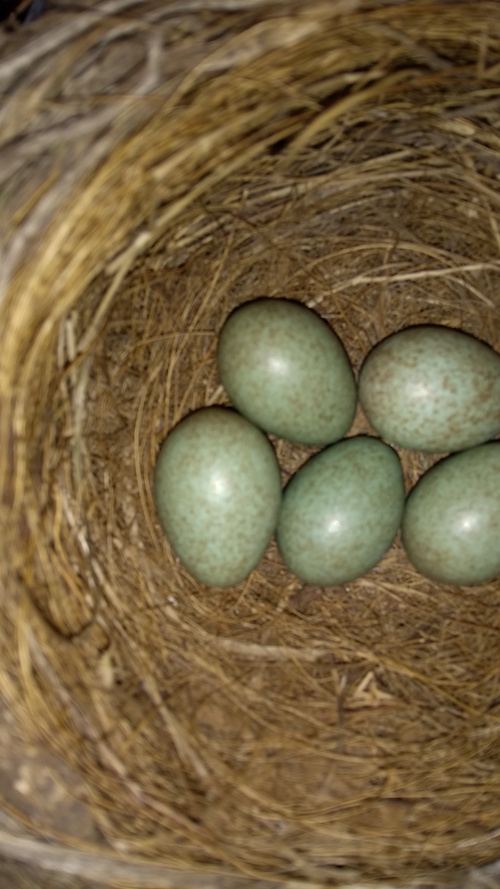 Steve Maskery":2x6wksv3 said:
It the end of winter yet my wood stack is still full, with other stacks around. While it is nice weather at the mo, the evenings can be a bit chilly, but I can't actually get at my firewood! Why? I have a lodger called Brenda.
Brenda and her mate Bobby are squatting in my firewood store and have started to make it home...
Click to expand...

Steve Maskery":2z3u6swr said:
It the end of winter yet my wood stack is still full, with other stacks around. While it is nice weather at the mo, the evenings can be a bit chilly, but I can't actually get at my firewood! Why? I have a lodger called Brenda.
Brenda and her mate Bobby are squatting in my firewood store and have started to make it home...
Click to expand...

They'd make a good omelette, I reckon.
Click to expand...

Talking about Summer, we here (Switzerland) have had a warmer (not much snow in the lower lands) Winter but colder (about 4 deg C lower than average, but much more rain than usual) Spring throughout April & May. But nice now (forecast 28 C today, 30 C Sunday).

BUT while they're back again, is it just my imagination, or are there far fewer Swallows and Swifts about than is usual at this time of year?

Here we normally get "gangs" of at least a dozen or more (IF you can count them!) zooming around like demented jet fighters all the time, but this year they seem to be only in groups of 2s, 3s & 4s with any bigger grouping only seen very seldom. Is it the same in UK? If so, any ideas as to why?
H

We have a smaller squadron of 4 swifts this year, so far, normally we get up to 10, I have one nesting in the roof in the barn at the back of my cottage.
I also have a couple of the Zeist type boxes dotted around which have they not shown any interest in, but the rate of knots they come through at, I doubt if they even have time to notice them.

One of the reasons I think we see fewer of them is suitable nest sites, all the old Barns around here have been converted and the house roofs are all being replaced.

Theyve all come to Cyprus! we have more swifts then usual, and they are staying longer (normally they would already be moving on).
Because we had the wettest winter for over a 100 years, the insect population is late arriving, but we certainly have enough to go around now.
I love those swifts, over 80 per day per bird to keep them alive.
We are into July/august temps already, high 30's every day, another reason to stay here 8) 8)

We've also now got giant spiders that we've never seen before. a 6" across wolf spider was in the garden thursday, but luckily at the moment I have two women in the house to deal with this kind of emergency. :roll: :roll:
J

Much fewer Swallows, House Martins and Swifts also here in my part of Oxfordshire than in previous years. At times the sky seems empty. Something drastic must have happened either in Africa or on their migration north.

Cypriots still shoot song birds, but at least they do respect breeding season.
They dont shoot swallows or swifts though.
S

Ta for clarification. Don't like anybody that disrupts ecological balance like that. There just can't be enough eating on a songbird to justify hunting them, surely?

Yeah Sammy, I heard about that too. There was a programme about that on a German TV channel I saw about a year or two ago. Apparently it's been illegal for years under Italy's own laws, but at the time of the above programme the EU were going to strengthen that rule. Don't know if it happened or not - apparently very difficult anyway because it's an "ancient tradition" in Italy (apparently these little birds are very good eating, can you believe?)! (And perhaps with only a LITTLE tongue in cheek, IME, yer average Italian ain't perhaps the most law-abiding of citizens)!

Re barn conversions and such, that MAY be a factor here, though generally speaking there's more new building going on than old house & barn, etc, renovations. Our local village council did put up a couple of nest boxes a few years back but from what I can see, they're empty this year.

So in the main, it's as I thought then, and in UK too, there's less of these lovely little birds about this year - so far anyway (and BTW, excuse my "bird recognition" - I MAY well be talking about House Martins as well as/instead of Swifts and Swallows - I see basically 2 different "types", one with a vee tail, one with a long straight rectangular tail).

No idea why this shortage.

They use vacuums to harvest olives at night, and up to 100 birds per trailer load of olives die in the process - I believe there are petitions to the EU to ban night time harvesting. I don't know why night time is preferable.
S

Gah. Seriously unimpressed by non-ecologists of any race.

No, there is NO meat on a bird that is only 3 inches long when its alive.
Especially after youve cleaned out all the lead shot that killed it.
Cypriots are very traditional, the most common phrase an ex-pat hears is
" My father did this, and I am doing this".

When I had a cypriot apprentice I got that every time I told him he was doing something wrong. When I pointed out that his father had also been doing it wrong, I got a very dirty look indeed. :roll:

Because i worked with them I tried the dish of roasted songbirds, imagine a crock pot filled with tiny skeletons so small that you can put the entire breast bone in your mouth, then you have to suck off the minute amount of meat left on it. #-o

I would rather eat a big mac, and that shows you just how bad it is. (hammer) (hammer)
S

I grew up in a traditionalist, agricultural, very rural area and a fairly rigid adherence to 'received wisdom'. Similar to that which your describe on Cyprus. Mine was the generation that broke out, so maybe there is hope yet with the advent of social media broadening peoples' worlds.