Replacing the capacitor in an old Elektra Beckum HC260 p/t

This is only for the electrically savvy! If there is someone with an old (mine is 1979, its serial number is 100078) HC 260 that they could quickly peer inside the switch box of they'd be my friend for life.

My capacitor went, and when the replacement had a different type of connector (wire rather than spade terminal) I had to open up the switch box. I gave the capacitor wires an injudicious yank, one of them came away in my hand (honest!) and I can't see what it used to be attached to.

Looking more closely, the other lead from the capacitor is joined straight to a green wire that comes out of the motor body itself - presumably the starting winding. The other one is now connected to a short, dangling, piece of brown wire - the cap has clearly been replaced before, not particularly well. I THINK it should be connected to one of the terminals on the relay, in parallel with what seems to be one of the running windings. If the photo has uploaded properly you can see which one, terminal 34/32 on the relay, just next to the spring.

If I don't hear from anyone I'll give it a go - it can only blow a fuse, can't it? - but it would be wonderful if someone could have a look. Or maybe you know where there is a wiring diagram?

Assuming that the lower green and gold wires are connected to one tag on the relay - as it appears. Then I would try connecting the brown wire to the flying spade receptacle which needs to be connected to the other pole of the switched supply - presumably to the empty tag on the NVR relay.

Note for the future: Make notes or photograph connections before apply any force!

My HC260 is a similar age and has the same serial number! Anyway the brown wire from the capacitor fits onto the left spade terminal - the one at the front left as you look at it - circled in red. My photo shows the unit in the same orientation as your photo - i.e. upside down, but yours looks to be backwards - check the position of the lever on the right of your unit compared to mine on the left. So I would think the loose spade connector with the yellow wire should also have the brown wire attached to it and clipped on to the main unit. 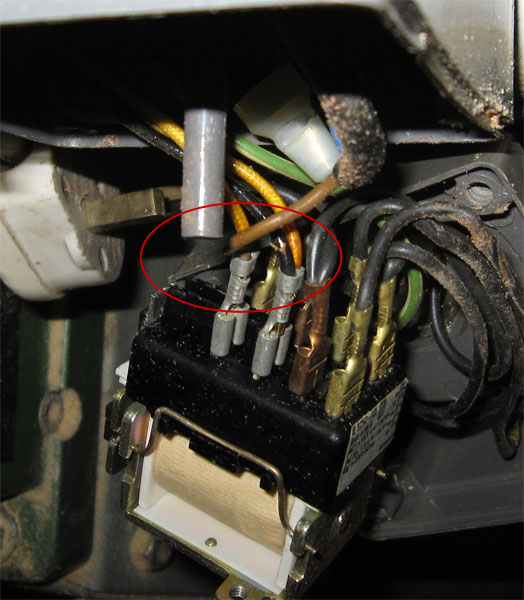 Many many thanks, Gents, and particularly to Andy for taking the trouble to photograph his.

It works! I've done as advised, and it fired up first time - not without a bit of trepidation on my part.

Here's a photo, complete with shavings, to prove it.