I've been lurking on this forum for a while now and as I'm starting to try to get into woodworking, I thought I ought to bite the bullet and introduce myself to the forum.

My name is Al and I'm a wannabe woodworker.

My working life involves designing electronics so is mostly spent staring at computer screens. I enjoy making stuff in my spare time as it feels a bit more real than looking at schematics and embedded C code. Most of what I've done is metalwork rather than woodwork though.

I've always been of the opinion that it really doesn't matter what I make; the process of making stuff is what I enjoy. As a result, I've spent way, way more time making tools (to help me make more stuff) than I have making anything else. I have found that this makes it quite hard to explain my hobby to people. They ask what I make and I tell them I mostly end up making tools to help me make things and they usually say "but at some point you're going to have to make something with all those tools": they don't seem to grasp that it's never mattered to me what I make. As I start to do more woodwork I would like to have a go at making things other than tools; the thing that scares me most about that is having to make things look good rather than just function well!

I've done odd bits of woodwork in the past (mostly with borrowed tools), including a big planter for the garden (which I was quite proud of at the time but which is starting to look quite tired and a bit rotten after 13 years in the garden). Here's a photo of what it looked like 13 years ago: 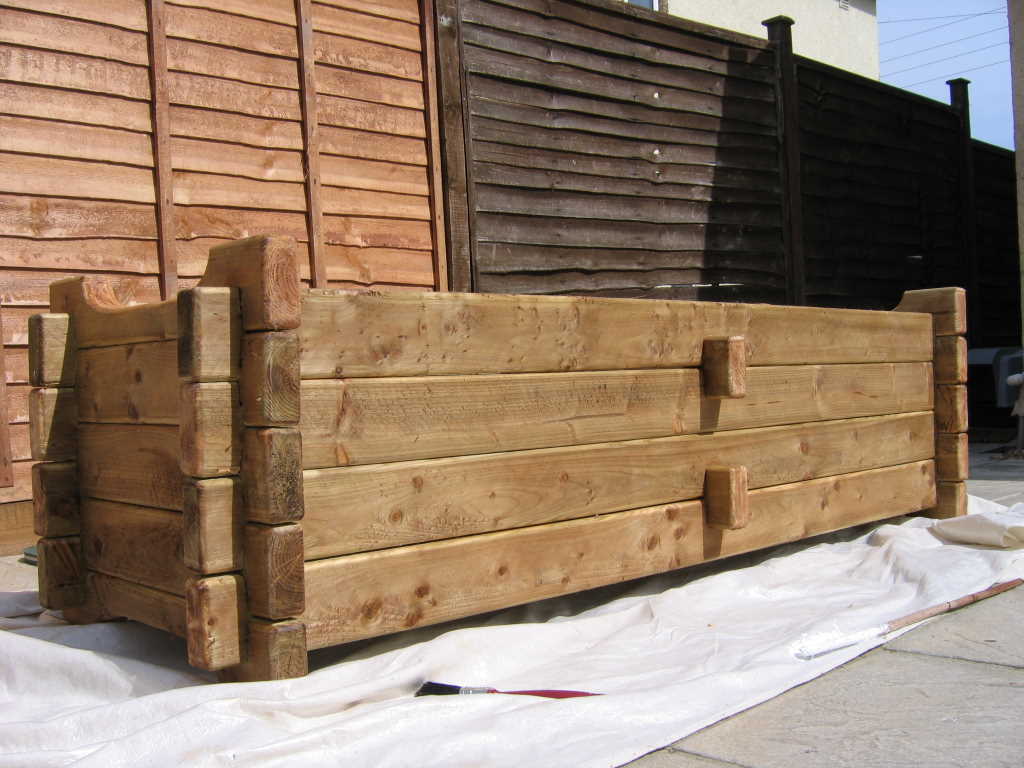 My working space is very limited (until recently it was half of a single garage; I'm currently enjoying the luxury of it having increased to be 3/4 of a single garage!). That's one of the reasons I got into metalwork first rather than woodwork: my first metalworking lathe was a little bench-top thing and I've made a lot of small things that don't take up much space. Until I started welding, it was rare that I would make anything that was much bigger than a paperback book. As I've managed to free up another bit of space though, I'm keen to start doing a bit more with wood and have been enjoying setting up an area to work in. I've also recently ordered some planed-all-round oak online; hopefully that will end up being a good buy and it won't all be warped! It'll at least give me some initial experience in working with hardwood: the pandemic limited the options for buying stuff in person so the online order seemed a good choice. I've got a lot to learn about buying and working with wood though.

Over the years I've acquired a few woodworking tools (mostly from second hand shops) and I've been adding to that recently. Let's be honest, I never really need much of an excuse to buy more tools! I've also been enjoying fettling the second hand tools I already had (sharpening chisels and planes, planing the bottom of wooden planes, removing rust from various rusty tools etc).

I thought I'd post a few photos of my workshop in case anyone is interested. Here's a photo of the metalworking end of my garage: 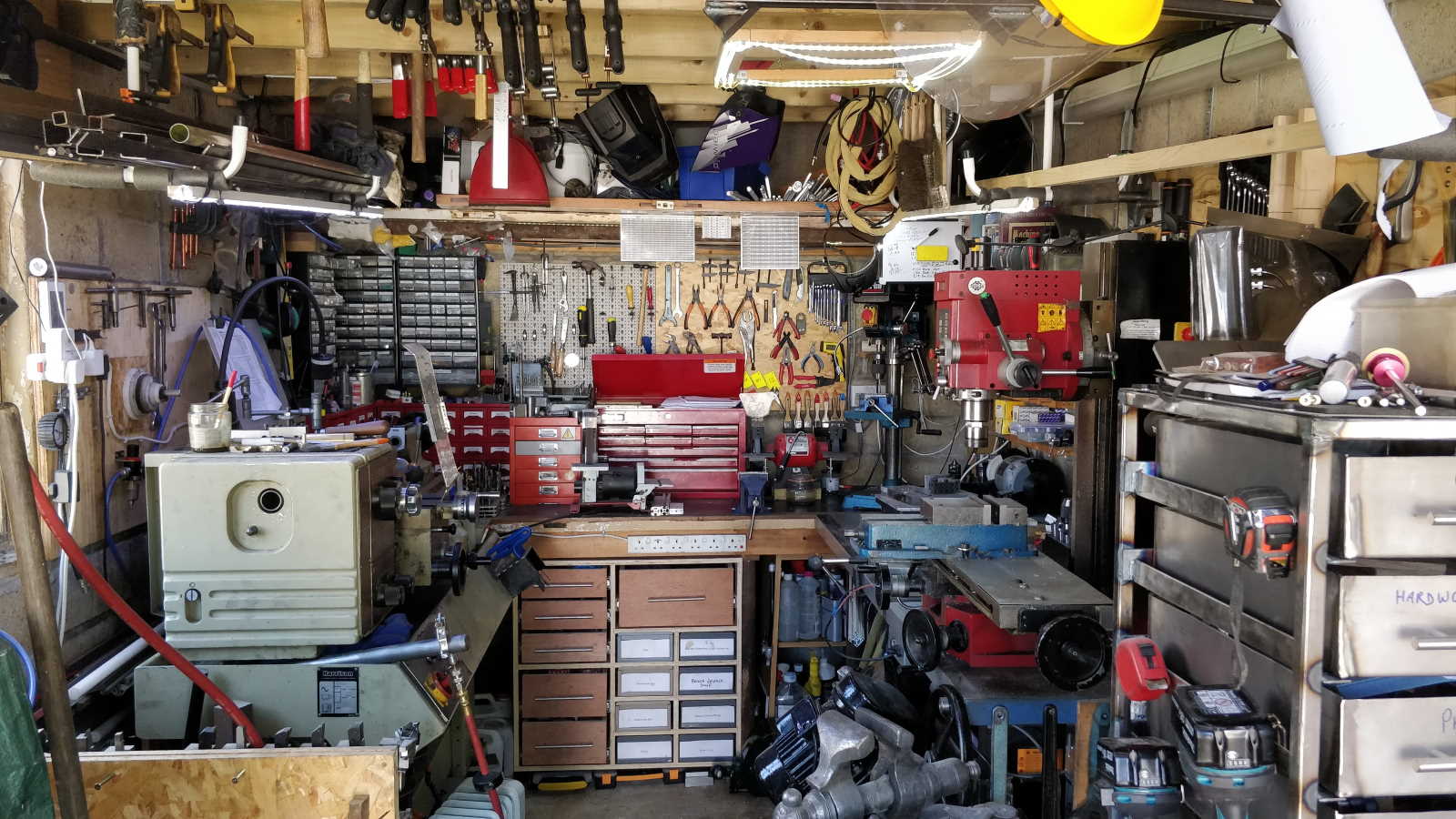 Under the bench at the far end is a fairly heavy duty wooden chest of drawers I made (out of 18 mm B&Q plywood, so not "proper" woodworking!) recently. There's another photo here: 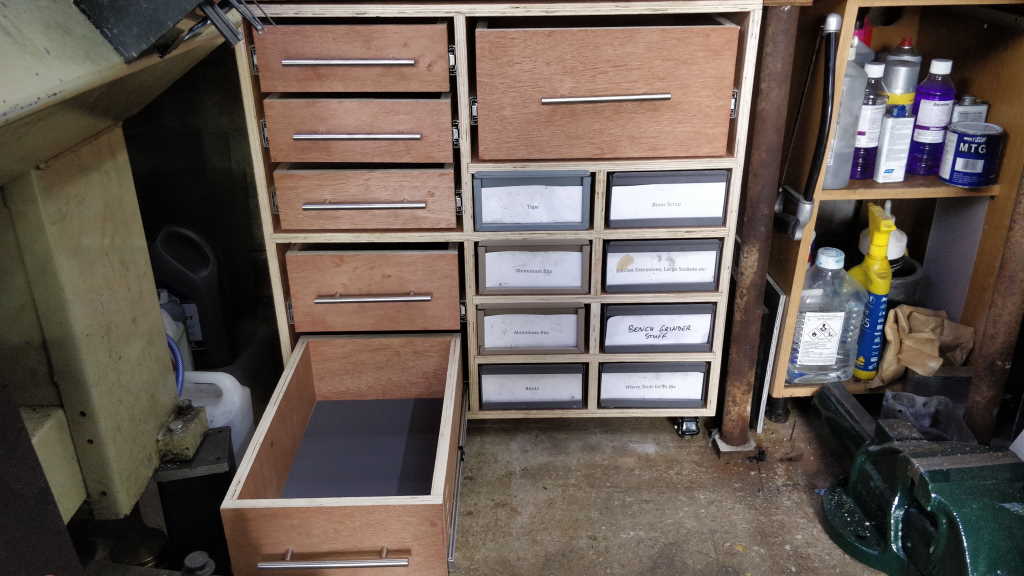 I had been planning to add false drawer fronts (if that's the right term) to cover up the gaps around the drawers where the runners are, but to be honest I doubt I'll bother. It's only a workshop chest of drawers so it really doesn't need to look pretty. That was made pretty much entirely with power tools, but I want to do a lot more with hand tools as well and I envisage a mix of the two for most projects with real wood.

This is the more recent woodworking corner of the garage: 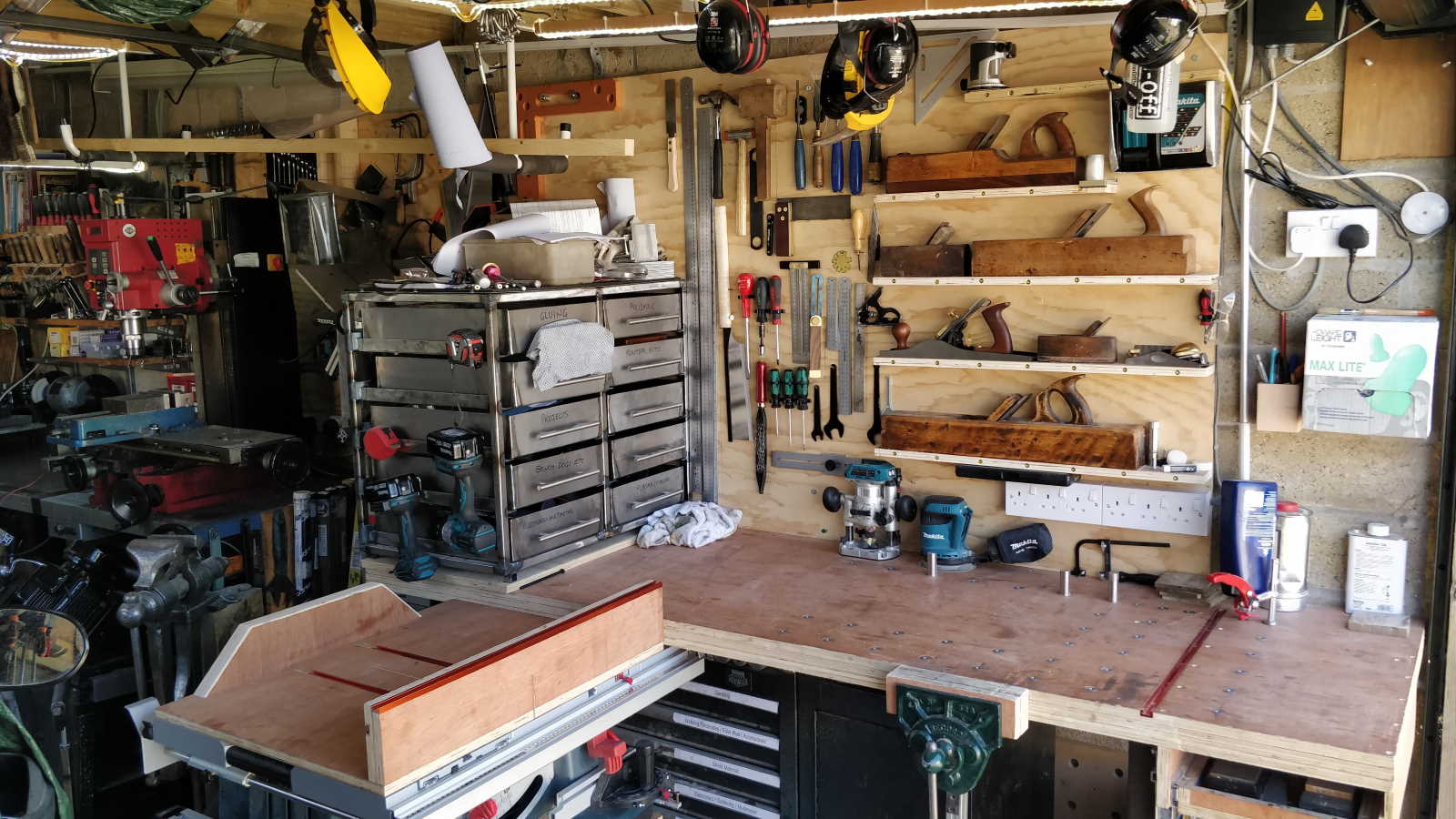 You can see most of the tools I've got available to me (although the tenon and hand saws are out of sight behind the home-made steel drawer unit and a few things are in drawers): I'm a big fan of shadow boards so you can see where your tools are! I've also made (out of a load of t-slot extrusion taken out of the skip at work) my own router table for my 1/2" router, which mounts the bench in a few seconds with two pins and uses the Makita router's neat built-in M6 adjuster screw to allow the cutter height to be changed from above the table: 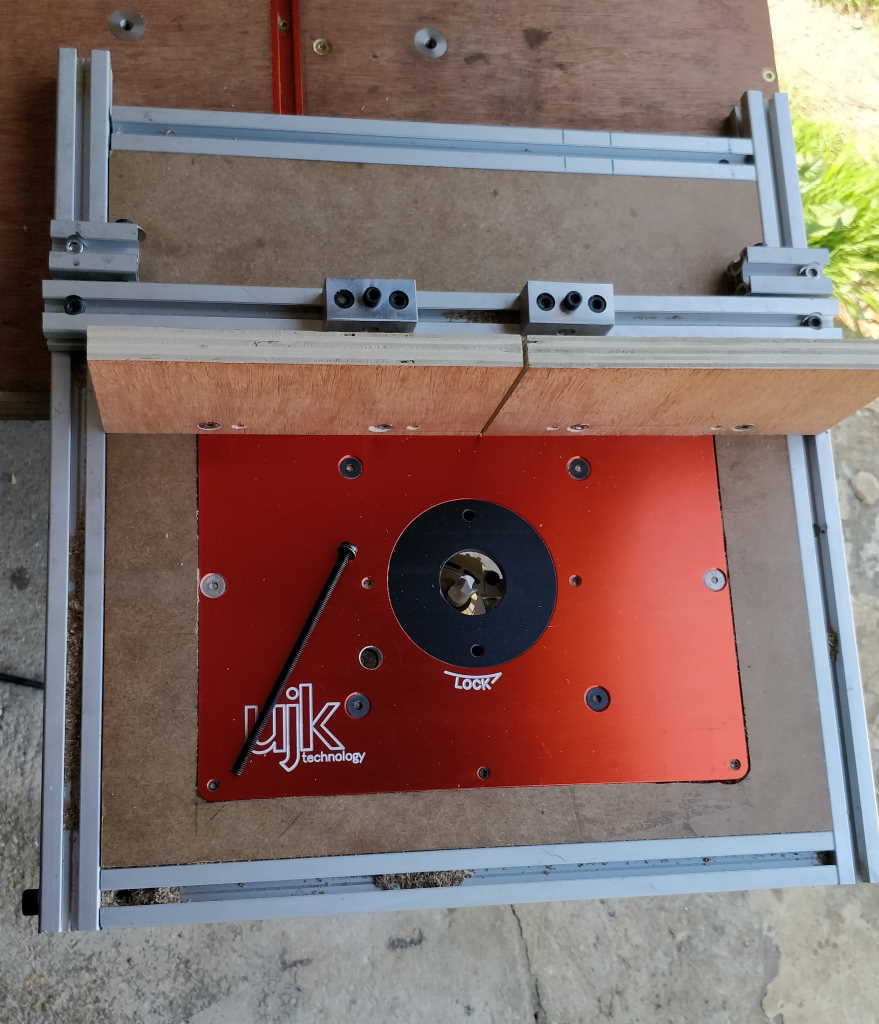 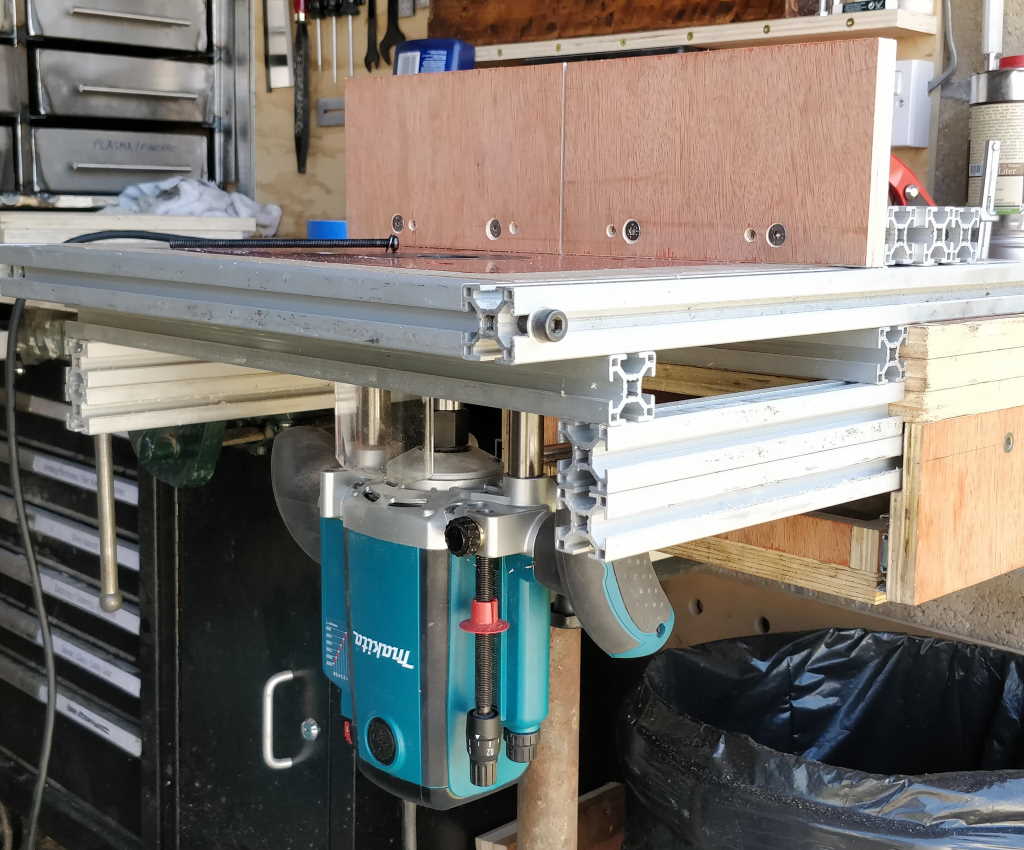 Anyway, I have a tendency for verbosity and I can see this post is already longer than most people will be interested in reading, so I'll shut up now!

Fab intro and workshop walkthrough. Welcome! I'm impressed by your plane collection - not bad for a metalworker.

The number of woodworking tools and workshop add-ons you could make are innumerable - you should be busy for years.

Welcome Al. Great photos! Blimey, you've got lots of stuff in not much space.........Dead cats aren't in danger of being swung in there. :lol:
M

As an engineer turning to woodwork, it's my guess that you will be a wood machinist ie someone who treats wood as just another material to make things from.
You will possibly have a preference for using machines, jigs and fixtures rather than hand tools.
Well that is true for me, am I right about you Dr Al?

I do love a proper shed!

Trainee neophyte":2fgjuweg said:
Fab intro and workshop walkthrough. Welcome! I'm impressed by your plane collection - not bad for a metalworker.
Click to expand...

The planes have been acquired over many years. Some were inherited, some came from charity or junk shops. One of them (the small-ish one near the top on the left) is missing the blade, but the others are all complete and sharp.


Trainee neophyte":2fgjuweg said:
The number of woodworking tools and workshop add-ons you could make are innumerable - you should be busy for years.
Click to expand...

I've been enjoying reading about some of the options and I think I'm going to enjoy being busy!

Thanks for the welcome & I'm glad you liked the intro

MikeG.":oh7qi25o said:
Welcome Al. Great photos! Blimey, you've got lots of stuff in not much space.........Dead cats aren't in danger of being swung in there. :lol:
Click to expand...

I seem to spend a lot of time rearranging things to get a little more in. I can't wait to move somewhere with more space, although I'm sure I'll fill it quickly!

Myfordman":1ys5tq68 said:
As an engineer turning to woodwork, it's my guess that you will be a wood machinist ie someone who treats wood as just another material to make things from.
You will possibly have a preference for using machines, jigs and fixtures rather than hand tools.
Well that is true for me, am I right about you Dr Al?
Click to expand...

I think it's probably my natural instinct, but I'm trying my best to fight it and have been experimenting with (badly so far) hand cutting a few joints for practice. I'm hoping I reach a happy medium where I use power tools where it would be daft not to (cutting long straight cuts in plywood) or where a router cutter is simply a lot cheaper than a specialist plane, but where hand tools come out in other situations.

Only time will tell...
T

We meet again Dr Al.
Welcome. I have recently signed up, as my wood working has taken a new turn.

The_Yellow_Ardvark":3e86trty said:
We meet again Dr Al.
Welcome. I have recently signed up, as my wood working has taken a new turn.

Hello again TYA. I'll be down your neck of the woods later this week. After not having left our little Cotswold town since March, we decided we could finally justify a trip out so we're going to try for Fish & Chips in Lyme Regis on Friday (yes, we picked the day with the worst weather forecast). I've persuaded the OH that the Vintage Tool Shop in Stalbridge really isn't that much of a detour! :lol: