I had some good suggestions in a thread I started last month about some garden tool ideas for my wife's birthday. I bought a Hori Hori knife and a pair of Felco secateurs intending to make leather holders for both.

The Hori Hori knife arrived with a rather poorly thought out (or at least, boring) beech handle, so that provided me with an opportunity for customisation (of course with Walnut)...

So off it came, which revealed the tang following the concave nature of the blade for a little longer than was convenient. A little hand chiseling (and 2 pairs of wasted scales) got me a pair of oversized scales that clasped the tang nicely. After gluing up, I channeled my inner Diresta and whittled away using the bandsaw. I've never done anything freehand like that before and it was very intimidating (particularly after screwing up something as simple as shaping scales around the tang), but I aimed to keep the handle big and creep up on and, and that largely worked. 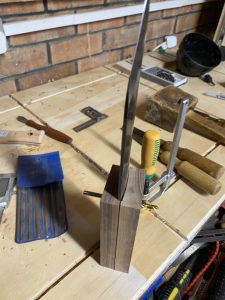 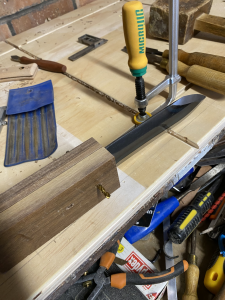 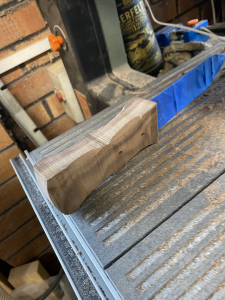 After rough shaping on the bandsaw, I started refining/carving using a reverse motion on the bandsaw blade, this was really effective and let me get to the final shape using the bandsaw alone. 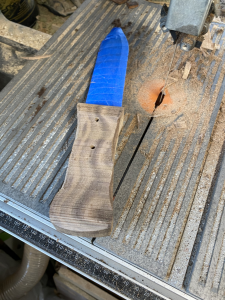 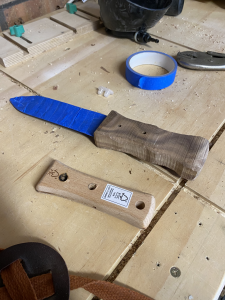 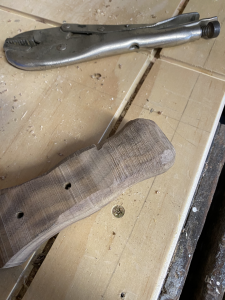 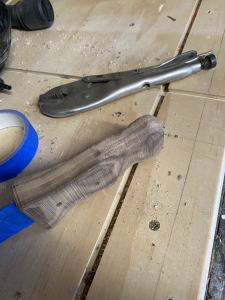 The last two photos above show off the final shaping, unfortunately I didn't get a shot of the handle before I moved to sanding .

Lots of sanding required to remove the deep blade marks, but I can honestly same that the final shape was accomplished on the bandsaw alone, which feels like a decent accomplishment for a novice.

I forget at what point I added the brass pins. They're not glued, just peened.

Some boiled linseed oil later, and it's a done job. 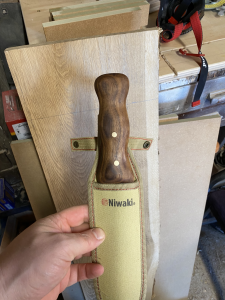 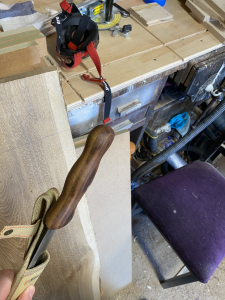 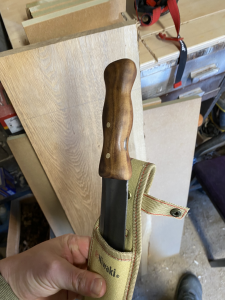 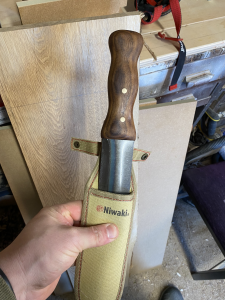 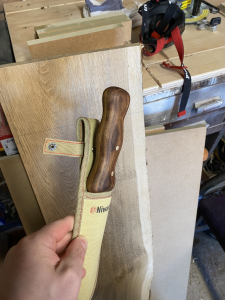 I'm incredibly pleased with how it turned out, in spite of a couple of issues that I have with it. It's a bit big, probably a nice size for my hand, but not for my wife's. I also carved a bit deep in one spot and revealed the tang. They're mistakes that are pretty minor in the grand scheme of things

Great job snetty, love to see the holsters. How is SWMBO liking the new trowel?
A

biskit said:
Great job snetty, love to see the holsters. How is SWMBO liking the new trowel?
Click to expand...

I think it's taking a bit of getting used to, the secateurs are obviously a more natural addition to her toolset.

Just realised that I never got around to uploading the secateur holster and belt.

The holster itself was made by wetting 3mm veg tan leather and clamping it over the secateurs. Leather glue, stitching chisels etc made short work of the rest. The result is a really good snug fit that holds the secateurs securely but isn't so tight as to be difficult to use. There are some tooling marks that I could have avoided with some forethought, but this was finished in a rush, largely whilst on work calls, so I'm pretty happy with the result.

I was quite unsure about how the wife would want to attach the holster to herself. She doesn't typically wear a belt, or anything substantial enough for a belt clip, so I considered a shoulder strap, but ended up making a belt with a quick release buckle. It's very much a trial, I'll see how she uses it and adapt the solution to suit. Currently it's very ungainly and awkward, but I'm a big proponent of "I know nothing about how this product will actually be used, so experiment on the subject", so I'm comfortable with it for now.

Unfortunately I didn't get any photos of the process, so you'll have to make do with the finished product. 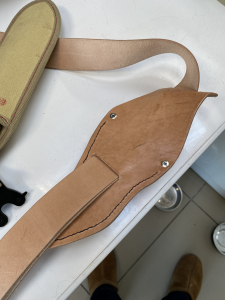 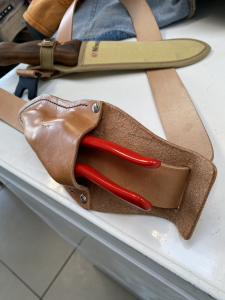 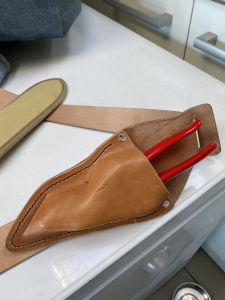 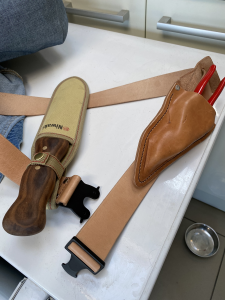 Nice, the belt is the way to go. As you can see from my avatar our Bobble has trouble with shoulder straps, belts are easier.

biskit said:
Nice, the belt is the way to go. As you can see from my avatar our Bobble has trouble with shoulder straps, belts are easier.
Click to expand...

I have an hunch that eventually the solution will be something that is mostly carried around. Possibly a combination of tool tote and garden basket, with a shoulder strap for when both hands are needed. That way it can hold things like plant labels, tags, pencil, ties etc. Hmm, that's got me thinking

Yesterday at 08:44
sams93
S
I
A labour of love - restoring old woodblock parquet
2