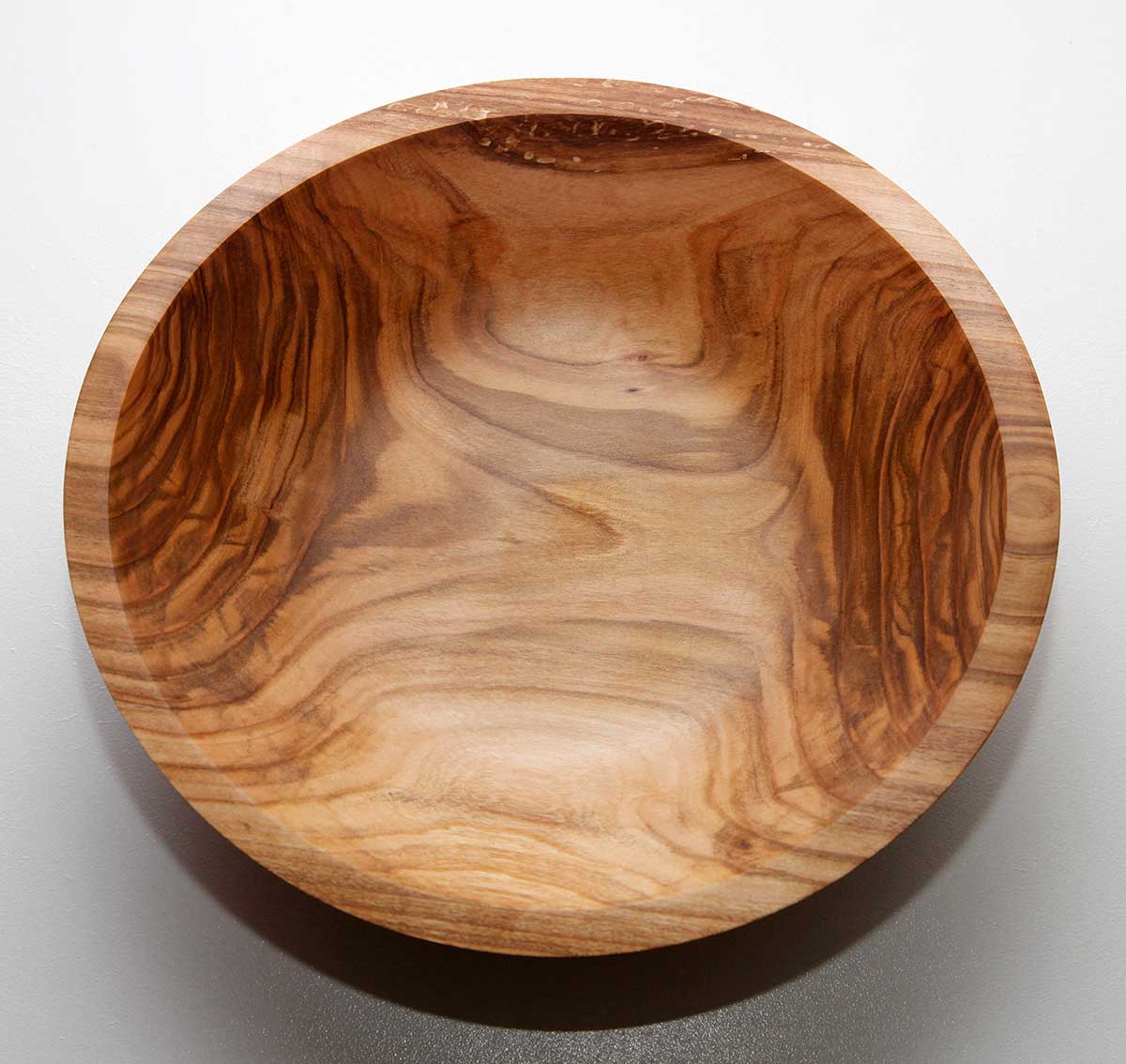 The log had been hanging around some time, hence the staining. At one edge, there's some decay - 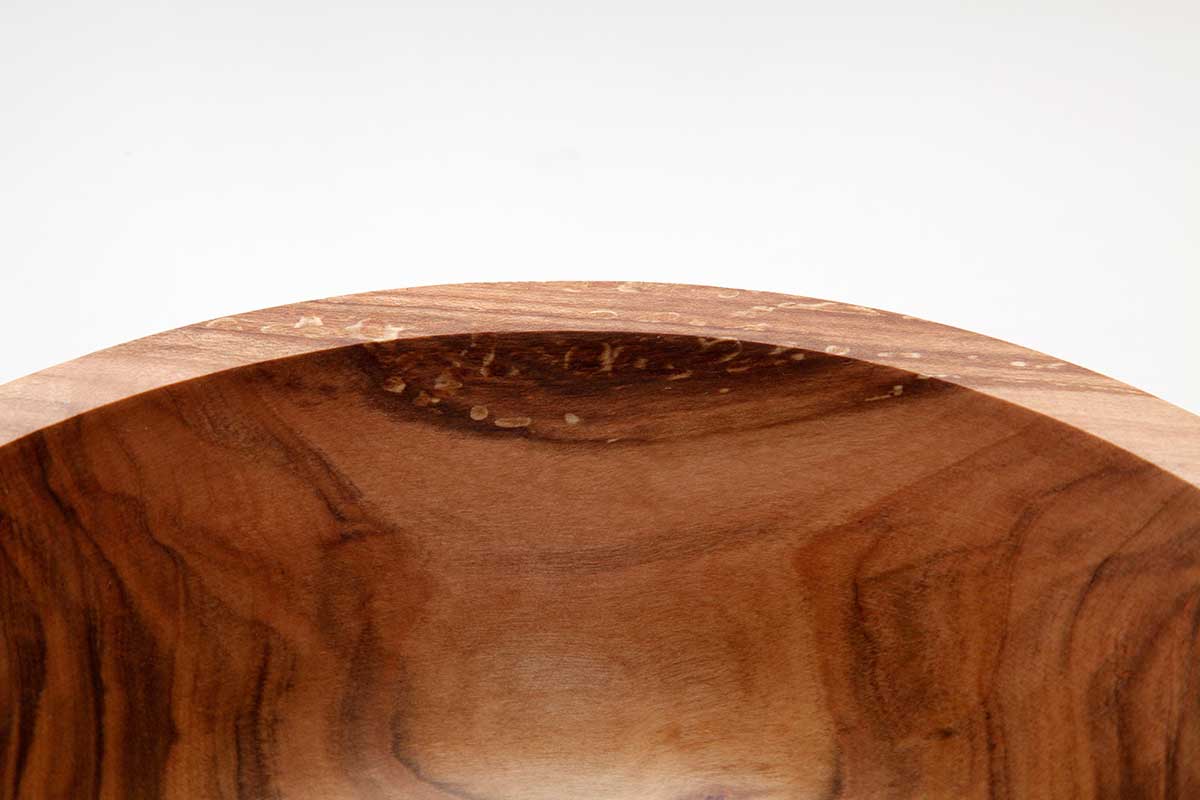 It's pretending to be worm activity to my eye, but there don't seem to be any holes, just areas of decay and no cavity as far as I can tell. Any ideas what this is/ why it's going on? I've seen that kind of shape quite often in wood that's decaying. And am I right thinking it's not worm activity?
Thanks.

Maybe you have turned away all of the holes. It looks like something has been nibbling to me.
D

Hmmm, that's a shame, I was hoping to hear something different! The plan was to take it to a sale this weekend - worm tends to put people off I suppose. The moisture's down to about 12% and it'll be fine once it's fully stabilised in the house. I do like some wormy effects, it'll have to be a keeper. :?
W 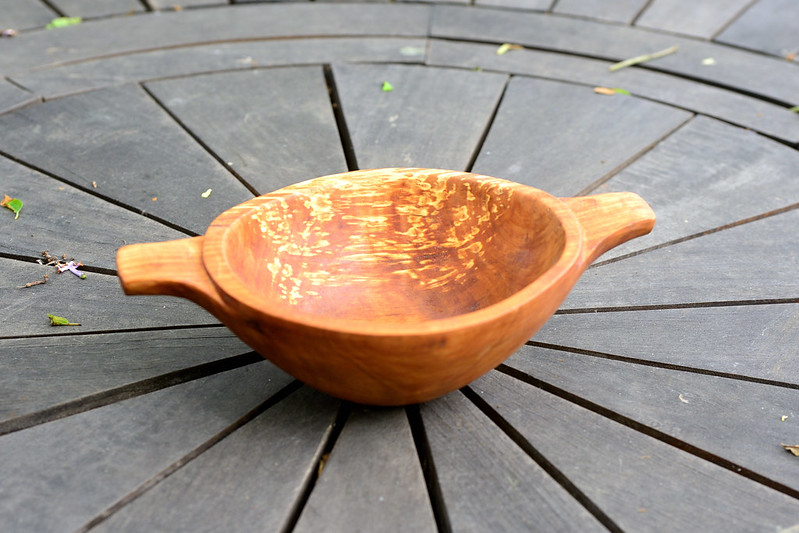 Apple bowl made from a log with mushrooms growing out of it.

Apple bowl made from a log with mushrooms growing out of it.

Now that's the sort of answer I was hoping for!
So, if it's spalting, how come it doesn't have the darker lines that delineate the areas of fungal growth that's familiar? Is that just the way fruit trees spalt? Or is it just that the fungus is not advanced enough to have created borders? (Just been reading this: https://www.northernspalting.com/spalting-info/faqs/ )
K

Fruitwood tends to spalt like this,whereas atimber such as beech has the more distinctive black lines,hawthorn also has spaltlng of a similar nature,very beautiful and you can charge more for your work if it exhibits this kind of colouring,it will fade and become less attractive with age or left in direct sunlight.

It's the main body of the mushroom, the bits that we recognise as mushrooms are just the sexual organs of the organism that grow outside the tree when it fruits. Very common in fruit trees, which fungi love, but you'll also find it in oak, sycamore ash etc.

Chris152":x1ipbu4e said:
...
..So, if it's spalting, how come it doesn't have the darker lines that delineate the areas of fungal growth that's familiar? Is that just the way fruit trees spalt? Or is it just that the fungus is not advanced enough to have created borders?
Click to expand...

The lack of darker delineating lines is most likely because you have just one species of fungal infection and subsequent rotting.

The coloured lines (usually black but can be red, green etc.) only appear when several species of fungi compete in their efforts to break down the wood cells and put up barriers between each other in their fight for dominance.

It is likely that the lighter fungal infected areas are considerably softer than the main wood carcase and may need 'hardening' by soaking in sanding sealer or thin CA if they are to stay sound long term and keep their profile.

Rot or if selling spalting, this part it is in is right next to the bark so the most lightly to have been affected by wood eating fungi. Often seen this in cherry and also in small patches deeper in the wood. I tend to stay away from cherry for bowls it often warps outrageously and also has a tendency to split especially when used near the pith
C

I seem to be having some luck with once-turned green bowls - I did five cherry ones in this batch, a couple not turned so thin (I'm not that skilled), and put them straight in the boiler room in the hope they'd warp. They did but not a lot, no splitting, and they were all turned close to the pith. I've green turned quite a few different woods now and treated them pretty much the same - the only one that actually split was a large beech bowl that I put in the oven as an experiment (I did a few in a sunny spell in summer and left them in direct sunlight in the garden for several days, none split).
The other cherry ones sold at the fair, but I kept the one in question behind the table as I still wasn't sure - one customer saw it and was interested but I got them interested in another. I wouldn't want to sell something i think could be worm - once it's fully dry, fine. Tho I'm pretty much convinced by the spalting ids above.
You must log in or register to reply here.
Share:
Facebook Twitter Reddit Pinterest Tumblr WhatsApp Email Link