My version of a Dryad Junior book plough (for bookbinding)

For a while now I've been interested in bookbinding, and one of the problems for inexperienced amateurs such as myself is trimming the edges of what will become the book. Those with the money and space would use a guillotine, next up is a bookbinders plough, which is also expensive although possible to make if you have the time and resources, the last option is to use a blade generally with a curved cutting edge held flat on the press - I've been using a No. 4 iron. Anyway, Darryn of the youtube channel DAS Bookbinding, showed a video of him restoring and using a Dryad Junior book plough, here. If bookbinding interests you, I really recommend his channel - he seems to be on a one-man mission to make and document every known binding used in the last few hundred years!

This plough seems to have been Dryad's 'budget' model and, despite its looks, has a lot going for it in use. The main advantages are that it is much smaller than a conventional plough and the two points of contact make it considerably easier to use than my No.4 iron - the results are just as good, but without the constant worry of slipping or inadvertently changing the angle of the blade.

I estimated sizes from the video and once trued, ended up with a block of beech for the body 158x 50x 37mm. I had some suitable tool steel bar 20x 3mm and cut off a piece 100mm long - the blade on the original is a bit wider, but I thought this would be OK. 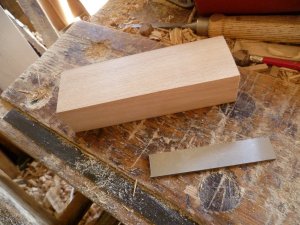 I then chiseled a slot for the blade, finishing it with my old womans tooth. 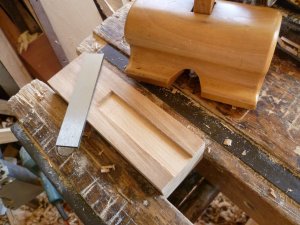 Next I beveled the edges of the top - I started by marking them out then realised that they should be deeper so did them by eye. 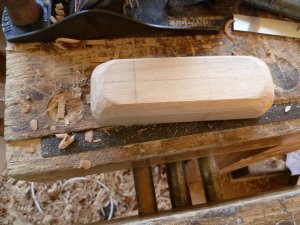 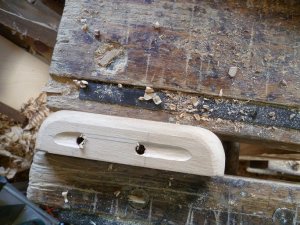 I'd played about with the block to see whether or not grooves would be helpful and decided that yes, it would feel slightly better with than without so I put rough grooves in, marked the depth of recess (17mm) and drilled the holes for the recess corners. The edges of the recess are 62mm from the bottom and 37mm from the top. 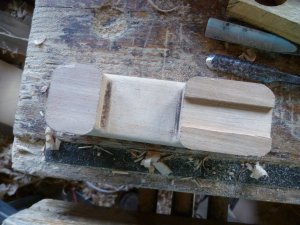 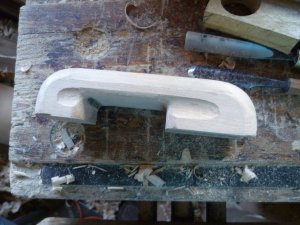 I cut out the recess (tennon saw for the sides, coping saw the rest) rounded off corners etc. 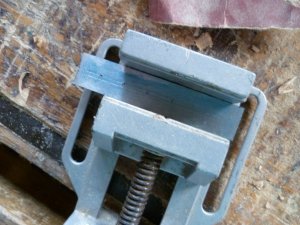 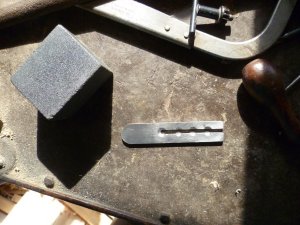 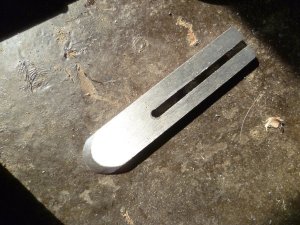 Next is the iron. I cut an open slot as I didn't have a saw to cut between holes. It doesn't look too bad, considering how terrible it looked in the process - I ended up using a dremel to finish off the countersinks! I shaped the cutting edge with a file. When it comes to metalwork I have neither the requisite tools or skill, but somehow managed to bodge my way through. Oh yes, then got the bade very hot with a blowtorch (bright red) and shoved it in some veg oil. I haven't tempered it as it seems to sharpen OK - I have a feeling that I may need to do this step again, I'll wait and see how quickly it gets blunt!
Last edited: 20 Jul 2021
S 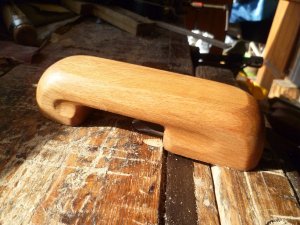 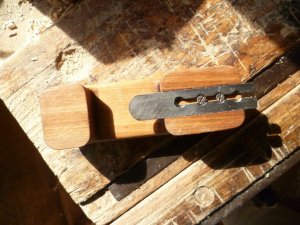 Here's the finished thing after a bit more tidying up and sanding and a couple of coats of the ubiquitous Boiled Linseed Oil. 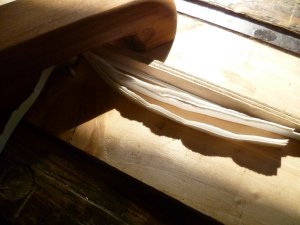 And a really terrible photo of it in use!

I made the cutting edge round as all book ploughs seem to have this - the original Dryad iron is pointed, although the point in the video has been rounded off.

If I was to do it again I might not bother with the slot in the iron and just have holes, the only use I can see for the slot is to allow you to quickly adjust how far the cutting edge protudes, and the only reason that you might want to do that is if you are trimming lots of books of very different thicknesses - not something I would anticipate being a problem, maybe use nut inserts and bolts if you're worried about screws losing their hold. Even better might be using magnets as shown here. The slot in the body would need to be stopped, but as the blade wouldn't need to have any holes or slots it would save much unnecessary jiggery pokery when making the blade.
I wanted to make this from solid beech because it would look and feel nice for me, but it could be built up from plywood and belt sanded, with a little thought a block could be built and blanks sliced off - possibly useful for instructors running workshops.

Hope this is of interest - any thoughts gratefully received!
Last edited: 3 Aug 2021
O

Bookbinding is a craft I know almost nothing about but that looks like its working. How often do you have to sharpen it? I take it paper would be hard on a blade edge.
Regards
John
S

Orraloon said:
Bookbinding is a craft I know almost nothing about but that looks like its working. How often do you have to sharpen it? I take it paper would be hard on a blade edge.
Regards
John
Click to expand...

To be honest, I don't know - I've only done a small amount and so far I've used a No. 4 iron that's got a bit more curve than you'd use for a jack, held flat on the press - it's surprisingly effective and oddly satisfying to see the strips of paper coming away. I think I've resharpened it once, but as I'm not using it very often that's more a measure of my laziness than its edge holding capabilities!
C

Trying not to be thick here, as you said it’s a terrible photograph! So is that the paper pages held between two blocks of wood in a vice? And then you slide along the wood to slice the paper, have I got it right? Ian
S

Cabinetman said:
Trying not to be thick here, as you said it’s a terrible photograph! So is that the paper pages held between two blocks of wood in a vice? And then you slide along the wood to slice the paper, have I got it right? Ian
Click to expand...

Absolutely right! It should be a purpose built press (that I still haven't finished yet...), but it's the same principle, just no need to fiddle about with unnecessary bits of wood. If you're interested, the video from DAS bookbinding I linked to above is very good, he demonstrates using it at the end, and if anything else to do with bookbinding piques your interest, he's almost certainly done a video on it!
S

This is a pretty good overview of the making of a book, and at about 9.30 shows a proper book plough in use - same principle as my 'junior' though with rather more control. Here.

F
How do you cut mitres on the end of long components?