A Leaky Disaster in my shop!

I have used an integral garage as a workshop for forty-odd years. Yesterday, I discovered that when my house was built, for some strange reason, the plumbers routed the overflow from the cold water tank into the garage. I became aware of this oversight when I went into the shop after a few days absence. I was met with a scene from Hell! I saw my planer/thicknesser covered in thick, red rust and water dripping down from the ceiling, all over my shelves and router bits. Also my Festool containers were soaked, and dripping with rust-coloured water. You can imagine my panic as I set to clearing up. 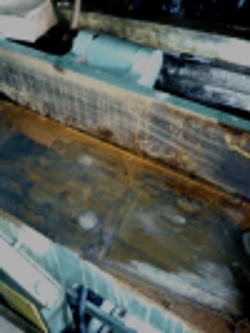 I have managed to clear up most of the mess, and my planer was not as bad as was first imagined. Most of the rust although thick, was fairly easily removed with the sharp edge of an old plane iron. Fortunately it seems the damage is limited to the in-feed and out-feed tables, and the cutter block, which I think I can sort. It just needs elbow grease, wet and dry, and plenty of WD40.

The systainers though are another matter. Now there was a time when I was considering ditching my systainers, and putting the machines in pigeon-hole storage on the wall; right under the site of the deluge! I’m so glad I didn’t get around to it. The systainers are absolutely watertight. A couple of them have been permanently stained with what looks like paprika! But the stuff inside was safe, and as dry as the proverbial bone. So, full marks to the systainers. They do what they were designed to do. Protect their contents.

I have taken steps to rectify the overflow problem of course, and a plumber friend is coming in tomorrow to fit a new valve in the tank, and re-route the overflow. I probably won’t need to worry about another flood once the plumber has finished, but to be honest, I don’t want to chance it again. The planer and systainers have to be moved for starters!

I have more or less cleaned up the mess, and all I have to do now is clear up the floor and let things dry out properly. I just have to keep my fingers crossed that there really isn’t any serious damage to the planer, because I really don’t want to strip it down. I would never get it back together!


I am going to attempt a WIP on sorting out this shop for once and all. Much moving of machines and benches is planned, so wish me luck please?

John, that must have been a nightmare. I'm glad that it wasn't as bad as you first thought. Neil

Benchwayze, what a nightmare, hope all is OK and at worst it's just a bit of clean up that's needed

I had a small leak in my garage flat roof but not as bad as that.

Good luck with the clean up.

Can you claim on your household insurance?

You might get the rust stains out of the Systainers with 'brick acid' from a builders' merchant. It's actually fairly conc. hydrochloric acid, and not very cheap (about 20 quid for a gallon container). I use it to get rust stains out of our old Belfast sink (If I forget and empty the trough from the wet grinder into it!).

Use gloves and eye protection. Do one surface at a time. Keep the acid on the surface by wetting kitchen paper and putting that on the plastic. When the stains are gone (takes a few minutes, possibly longer), wash it off in the sink, then hose the box down thoroughly afterwards in the shower and let it dry thoroughly before returning the tool(s).

It doesn't always work but usually it's good on plastics. The acid isn't as nasty as sulphuric acid, and a lot less nasty for humans than caustic soda (which wouldn't help anyway, just sayin'). I suggest trying on something affected that doesn't matter much (if possible) to see if you get a result.

Don't apply it to metals, just plastics and ceramics.

+1, but make sure to wipe over with an oily rag / wax etc afterwards, otherwise it tends to flash rust. At least that's my experience
R

Cilit Bang! How on earth did that product name ever get past the decision committee???
Y

Argh it sounds like a total nightmare. Hope you get it all sorted out.
B

Thanks to everyone for your empathy and advice. Problem will be sorted for good on Tuesday. My plumber diagnosed a corroded connection allowing the ball-cock to fill with water. (Hard water where I live unfortunately). He also had a few choice words for the plumber who fed the overflow into the garage. That problem will be fixed next week, by drilling a new 'route' through the outside wall. So all in all, problem sorted.

I now have to clear up the planer, and make sure it's working properly. Just a bit of TLC I think.

I might be able to claim on the insurance, for the ball-cock repairs, but it's hardly worth that hassle. Also, I think the company might look askance at the problem with the overflow route itself. They would be likely to put it down to bad working practice, and they don't pay up in those instances. I should have been aware of the overflow, I suppose, but there is a pipe outside, from the toilet cistern. It's that which I mistook for the water tank overflow. So I think the Insurance company might say it was partly my own fault. Maybe it is.

One good thing comes out of this; I really HAVE to get things cleared up, and my workshop moved around a bit. Now is as good a time as any! So I am off to get the graph paper out, and work out an orientation solution! Yeah! Okay! In 17 x 8.5 feet I have a job on my hands. I am trying for a WIP on this, btw if anyone is interested.

Ouch that sounds horrible. What I can't get is how the rust came out though ? Is your tank steel ? The overflow is at the top of the tank and any rust in the tank will surely sink. A rusting steel tank doesn't sound good

I changed my Pt2 valve a few weeks ago. It had stuck shut a few years ago which I fixed and now it was not fully closing. I already had a replacement ready didn't take long to change. The isolator at the tank was partially seized so I just turned the water off at the mains
B

The rust came from the tables of my planer.

The original cascade must have been enough to swamp the machine completely. The tables looked as if they had been given a couple of coats of red-lead paint. I only saw the last few drops splashing onto the planer, and rusty water was bouncing up over the boxes, which were against the wall, close to the planer. Part of the problem was the timber rack I have over that area. The water had been trickling through that to fall over the Festool boxes, and fill up the wells in the lids.

The timber rack has taken a couple of days to dry out; so I had to move the Festool boxes, into the utility room next the kitchen! Thankfully the weather has been hot over the last two days, and the garage has dried out well.

The tools stay in the house until this tank is fixed! SWMBO doesn't know I moved them... yet! [-o<

For the moment I've run out of wet 'n dry, and I have decided to rest until Monday. I don't think it will get any worse. Normally my shop is extremely dry, and paradoxically, I never have a problem with condensation or rust. This deluge was a different matter though!

M
A bit of recycling made my shop more comfortable.