I am interested in making woodwind instruments, so effectively spindle turning and lots of long hole boring. I have read quite a bit, and have an idea what I need: a moderately decent smallish second hand lathe, good and rigid, with a decent range of speeds and plenty horsepower. I just missed out on a Record CL3 36x30 which had been well cared for, and that to my mind is pretty much my ideal in terms of size and weight.

The largest item I'd want to turn would be around 550mm as a finished item, and a swivelling headstock would not be necessary, though potentially fun. I might occasionally be turning things up to a finished diameter of 4" but mostly much less than that.

Although I'd be starting off with cheaper woods, I'd intend eventually to be turning with harder exotics - African blackwood, ebony, that kind of thing. A lot of instrument makers use metal lathes for the power, and also in some cases to simplify accurate dimensioning, though that's manageable.

What sort of horsepower do you really need to turn woods like these comfortably? I don't really want something that can just about manage, I want to be confident in the machine. There's a DML 24 on eBay at the moment and although the price is good I wonder if it's just a tad on the small side.

I am sure that musicman will see this thread shortly and give you some expert advice.

In the meantime, for long, end grain boring, I wouldn't be overly concerned about horsepower. The blanks are not heavy with large off centre mass that would take some grunt to start off with. I would expect that you would need to make a steady to support the blanks.

Personally, I would probably look at a metal working lathe to do this task. It will probably turn at a better speed for drilling and will allow you to dimension to the tolerances that I expect you will need for an instrument. I once saw a demo where the turner used a gun drill for deep hole drilling and it looked like a very good system for things such as this.

I always recommend a minimum of 1 HP. It's not about weight but having a motor that's powerful enough to withstand heavy cuts. There's many a club demo I've done where I've had to adjust the cuts I do so the lathe can cope.

My first lathe was an old Record Power CL1. About 1/3hp I think. It was bolted to a very substantial bench which was in turn bolted to the (concrete) garage wall. It was fine for most turning but drilling and especially hollowing were a nightmare. It would do it but the vibration and noise made it a very unpleasant and neighbour-unfriendly job.

I don't think the old bedbar design, as used in those Record Power lathes, although fine for turning bowls and doing solid spindle work, really lends itself to hollowing. It tends, in my experience, to amplify vibration both acoustically and physically more than the cast flatbed design. Although in my case, bolting the bench to the wall might not have helped as it probably turned the entire garage into an amplifier!

I now have an Axminster AT1624VS (now renamed AT406WL) on cast iron legs and it is all the lathe I'll ever need - quiet, and vibration free even with the heaviest of uneven lumps.

If I was drilling hardwoods like ebony I'd go for the most powerful lathe I could afford, and stay away from bedbars.
U

Thanks all. I didn't think to mention but yes, I'd be hollowing some larger pieces (3-4" diameter with a thin wall to a depth of perhaps 4"). The long hole boring will be narrow holes, about 4mm. It does sound like a cast bed is necessary.

On using a metal lathe, that would be ideal in many ways, but I just don't have the space or access for a lathe big enough. I'm also thinking that most of what I do would be spindle turning and the higher speeds and convenience of a wood lathe probably outweigh the advantages of a metal lathe. I'm based in London so I'm sure I can find someone I could prevail upon when I need to make the one or two bits that absolutely can't be done on the wood lathe.

Also, budget is an issue, though I don't need much to get started - lathe, chuck, and 3/4 chisels would probably get me underway. I'm hoping I can find a lathe alone for £2-300, but I don't want to have to buy twice! I'm starting to wonder if that's really realistic.

Just a side note on cast beds (and probably others too) although they are good and solid, they need to be adjusted for twist once you have located the lathe, otherwise the tailstock and headstock will be out of line, you make the adjustment with the foot screws. I got caught out by this with my lathe when I bought it new, I assumed that the heavy cast bed and legs were completely rigid, they were not.
M

marcros":2159ccul said:
I am sure that musicman will see this thread shortly and give you some expert advice.

In the meantime, for long, end grain boring, I wouldn't be overly concerned about horsepower. The blanks are not heavy with large off centre mass that would take some grunt to start off with. I would expect that you would need to make a steady to support the blanks.

Personally, I would probably look at a metal working lathe to do this task. It will probably turn at a better speed for drilling and will allow you to dimension to the tolerances that I expect you will need for an instrument. I once saw a demo where the turner used a gun drill for deep hole drilling and it looked like a very good system for things such as this.
Click to expand...

I'd say 1 HP also but not too critical since you can just go slower. The 18th century woodwind makers did much work on pole lathes or with apprentice power. They would use a home-made steady, basically a big piece of wood mounted on the bed (normally timber) with a hole the right diameter in it.

So don't stress about this unless you want high productivity. OTOH they were using mainly boxwood, maple and fruitwoods, which are the only European woods that are suitable. (Oak, ash, douglas fir etc etc have the wrong porosity - technically you need diffuse-porous high-density hardwood). And most of the suitable species, including all of the Dalbergia species, are under severe CITES import restraints now.

As mentioned, metal lathes are very suitable, especially if you do want to use the harder exotic woods. Most professional makers nowadays use them, even for reproduction period instruments. It need not be a monster Hardinge like TFrench is restoring. All of the early reproduction instruments that the excellent maker Daniel Bangham made were done on a Myford ML7. You don't need screw cutting though an auto traverse is sometimes useful, as is a tailstock offset for taper turning. You can still do elements by hand on a metal lathe if you rig up a toolrest. A fixed steady is very useful and essential for some jobs, e.g. replacing a broken tenon. Myfords are good lathes but go at fairly high prices; there are others that will work as well and cost a lot less.

Another advantage of metal lathes is that they are much better for making reamers, which are valuable tools for much woodwind making (eg the inside of the bell).

Gun drills are quite handy for an instrument maker. You then drill the hole first and centre the work on the hole. (Otherwise you use a hollow tailstock centre, or a fixed steady, and drill the hole central to the work. But gun drilling is expensive to set up especially if you want a variety of hole sizes. and needs compressed air too. Probably cost you more than the lathe.

If you don't want to go down the metal lathe route, then something like a Graduate would do well, with its strong fixed bed and powerful motor. But do get a fixed steady.

You can go on woodwind making courses at Cambridge Woodwind Makers, under Daniel Bangham and others. They cost a bit but you end up with a working instrument in about ten days. Alternatively you can go on one of his maintenance day courses and look around his workshop and ask questions galore. He has set this charity up to transmit knowledge of woodwind making.

I've not made a complete instrument myself, but a number of the components, and have done a training course with Daniel Bangham. I helped him overhaul and set up some of the machines at CWM in fact.

Good luck and let us know your progress!

Just realised I typed out a long and thoughtful reply which for some daft reason I never added to this thread :roll:

Due to the times we're in, I have lots of time, but little budget, so on the principle that perfect is the enemy of good, I've discarded for now the idea of getting the lathe that would really be ideal for something a little smaller, and have pulled the trigger on a newish CL3 which comes with all the bits and pieces. A larger, indeed a metal lathe would be ideal, but for now I can make do with D bits and flat sheet reamers.

I do need to build a stand and I have a rough idea how to do it with the vast array of tools I have to hand, to wit, a mitre saw and a drill. But one measurement I need and can't find: what is the distance from the bench to the centre height of a CL3?

I'll do a sketch of what I have in mind and present it - I think it will work well enough but no point repeating other's mistakes.
U

Excuse my drawing skills, but hopefully you get the idea. Four legs and sheets are tied together with threaded rod, tensioned using an external nut. In conjunction with a slight cant on the legs, this should create a pretty solid structure from two bits of timber, threaded rod, and some nuts and washers. 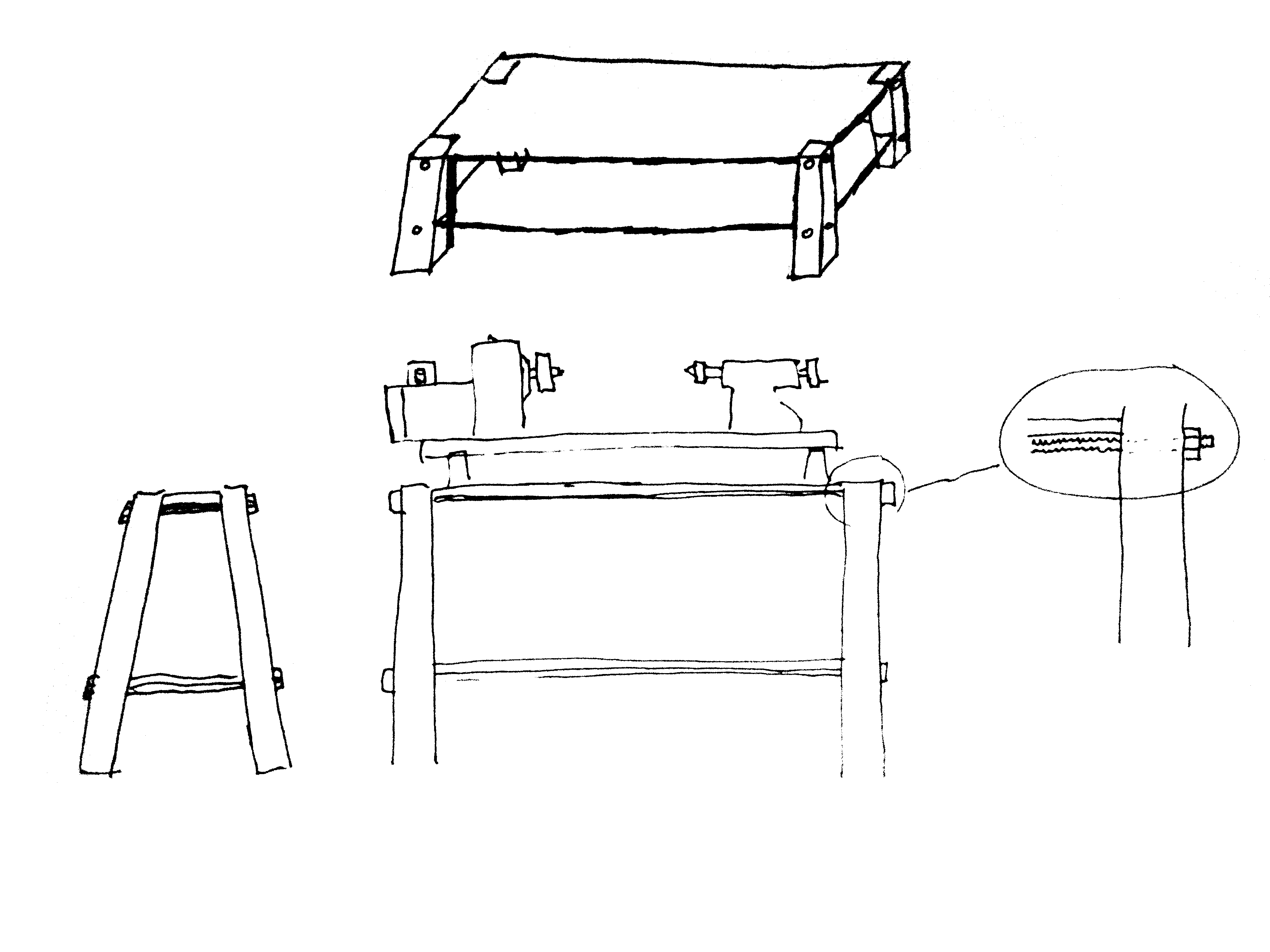 I think that design would be prone to racking left to right. I'd nail a sheet of plywood to the back legs and top.
U

Certainly wouldn't hurt! The compression joint is pretty strong but more stiffness isn't ever going to be a bad thing.

there are endless ways to make a lathe bench, but I wouldn't do it as you have suggested.

mine is similar to this one. http://users.xplornet.com/~hobby/holmes/workbench.htm or https://www.youtube.com/watch?v=mHwkUdPsYMk obviously you don't need the vices etc

It is predominantly sawn timber that I wizzed through the thicknesser to take the roughness off. I was new to turning and found that it was a touch low for me, so it has a scaffold board across the top which the lathe sits on. it is solid and was cheap/quick to build.
You must log in or register to reply here.
Share:
Facebook Twitter Reddit Pinterest Tumblr WhatsApp Email Link