Yay, someone is making a decent Bill Pentz cyclone build on youtube

I doubt there would be much if any noise reduction using thicker steel in the cyclone. If you want to make it quieter you need sound absorbing materials surrounding the cyclone. Some of the stuff used in cars and boats and space to a surrounding cabinet so the sound can't bridge the gap and is absorbed. A complex subject in its own right. Using a dust collector as a general room air filter is not the best largely because of the noise and also the amount of power it uses. If the cyclone is a good one using large ducting it captures the dust at source, never letting it get free to need cleaning up after. A fan in the wall or open doors and windows when the weather is decent is the low cost way to get rid of airborne dust and fumes.

The reason for having a large and powerful blower is to move a large enough volume of air. When fine dust is sprayed in all directions from a cutting blade one needs a large enough "bubble" around the blade where the air is flowing towards the inlet to the dust collection system. To make the "bubble" sufficiently large to really catch the fine dust one needs a 150-160mm dust port on many machines and a blower powerfull enough to make the air flow through it at a high enough pace.
When I had a too small blower my 160mm dust collection system silted up with dust.

Some of my dust ports are still too small but I am enlarging them when time allows. 120mm for the small machines and 160 for the larger is my goal.
H

Spectric said:
I think the job would have looked better had he done the welding with TIG!
Click to expand...

would have looked better gold plated but would it work any better. he done a good job with what he had. well done pal
I

Reading all this with interest since I have to rebuild my cyclone after my little mishap a while back when my drum almost caught fire! I used a motor/impeller from a Jet DC-1100 so underpowered according to Bill Pentz's calculations however with a cyclone diameter the same size as a standard 220l oil drum I found that in practice it works quite well with my usual workshop tools - both larger chips from my thicknesser and finer stuff from my bandsaw all get separated out ok.
I don't do much router work however it seems to cope with that too.
I bought off eBay a couple of empty 220l oil drums for £5ea and plan to use part of one for the cyclone portion and if I can bend it - the walls are part corrugated, for the cone. I did look at buying some 1-1.5mm sheet from a local steel stockholder but at £80 for a 2 x 1m sheet I discounted that thought!
I don't have a MIG welder which as others have said would be ideal for this but I do have an AC/DC TIG welder as I do some fab in Aluminium, and I think whilst it's possible to get a neater finish than with MIG, welding thin material and on curves where it would be difficult to place a moveable backer 'heatsink' would make that a challenge, and as others have stated, whilst his welds aren't the prettiest they look perfectly adequate and that's all that counts!
I look forward to the next instalment to see how it turns out -I have a couple of intervening jobs to complete before I can start on it, so am in no hurry.
S

That is just cosmetic, the welding is both cosmetic and structural and would have looked better if done with TIG, I am not saying it should have been done with TIG because he may not have access to one!

Part 2 was uploaded today, can't wait to watch it

I would have thought with the fabrication and welding he did in the first instalment he was going to weld up the impeller housing in the second video. No matter as the Clear Vue's have been making them from MDF since the beginning with no problems.
Pete

Unsure if the vast/small majority of folks whom have read Bill Pentz's website page
watching this video, who were pretty certain this was going to take the 5hp motor,
expected the blower to run without ducting at 25 amps!
(which Jer explained is over the rating of the motor, as is)
Wondering how much this can be theoretically reduced with ducting,
which I presume were going to find out in the next part...

as that combined with VFD for startup, lighter gauge impeller,
and smaller motor in my case,
Seemingly 3 hp is what I'm looking for after watching this, unless those amps drop by something ridiculous when rigged up, and would suggest best for a scrimper like me to have one run only to be as efficient as possible,
as Jer's machine as is, works out to be about 5 amps per HP.

Trying to figure out if I can get say something close to 1000CFM from something smaller, it's still likely to be well over the ratings of say a kettle by the looks of things.
Seems no way round getting 16a plugs and new CU fitted in shed, even for the
strange usage I would want a big dust extraction for, which is a temporary phase.

I look forward to seeing what results come from this,
and it would be really interesting if he decided to change something if need be.

Yet to see what limitations can be made for my case, as it wouldn't be for long duration, so seems I can do better than the wimpy dust bags off the shelf,
which I believe about 2hp might be the max you can buy with a household plug attached...
But can I achieve to run something with better performance
Taking example from the classifieds three phase flavours which are 3hp to 5hp motors with 12" impellers at best, which might be my limit, I see real rough examples of these occasionally

I'm getting the impression that 12" is the limit for a 3hp motor,
Not to say Bill might suggest attempting this for multiple reasons,
but one can take a few of these things into account if making one from scratch.

It would be nice to imagine the weight of the impeller has much factor, but I cant see
it making much difference once its up to speed, especially not so with VFD soft start.

Half that amperage is still WAY too much for a household plug and would probably cause a fire if let run for the time it takes to make a cuppa tea.

(cyclone / lights would be the only thing running in my case, and no machinery)
I don't know these things, and not keen to find out without having the figures.

Cheers to Jer for making these videos, they really are a helpful resource for one who wants to make an extraction system. 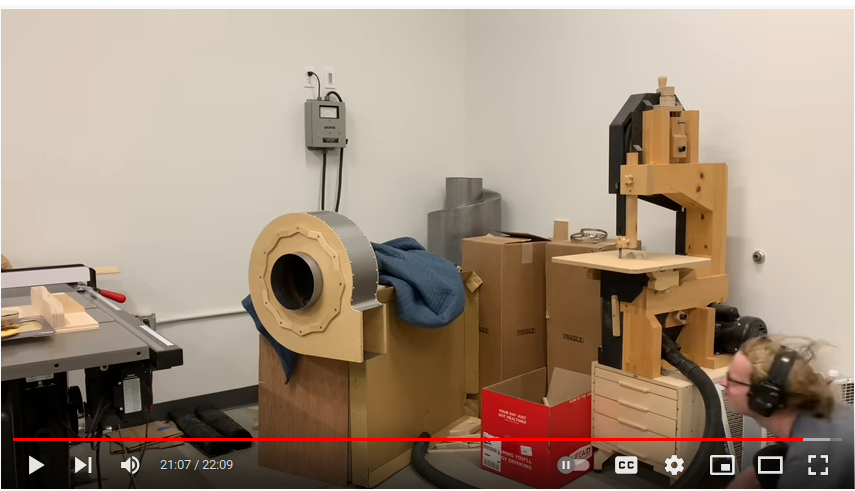 It appears like it maybe suitable for a smaller motor, but not much info about it.
It seems to me, or for anyone who wishes to have something not quite so powerful/consumptive, that it would be a good idea to start at the impeller
and motor choice, which becomes more fun when using a VFD
cabable of de-rating upto a 5hp motor,
Should that be or not be a good idea for some reasons,
loads of questions regarding that, as it seems a reasonable idea to start with something existing should it have a suitable impeller already,
well at least large enough, and presumably lighter than Jer's one,
should that make a big difference with use via VFD adjustable soft start.

It'll be interesting to make note of how much that 25 amps can be reduced to,
and whether this is of concern for Jer.

Hi Tom,
I got my motor and impeller up and running in the workshop back in January. I did a fairly quick and easy attempt at a 'cyclone' which in reality was a huge feed bin with the impeller housing on the top and a smaller feed bin on wheels underneath ( the bigger bin is 4' !!!)
I bought some ducting fittings and had some 145mm plastic pipe, which i used as the straights. I bought 6" flexi tube to go to the machines ( in approx 1m lengths )
It sounds like a jet fighter taking off and sucks chips off my hand at the bottom of the bin ( 4' away! )
This in turn meant that nothing much goes down to the feedbin on wheels!

I need to redo the ducting and probably just do away with the poor attempt at cyclone and accept i need an exterior bin store.
I guess my point is, when you go above a certain point, im not sure the cyclone would be effective. Im no expert though. The impeller is clearly drawing a massive amount of air and would probably over ride a cyclone? The housing inlet is 10" and i have 6" duct from the 'cyclone' attempt, which isnt very good tbh

I apologise for the mess on the photos, i was rushing to get it 'up and running' and hadn't tidied up for a while

The cone shape is to separate the fine dust from the heavy stuff and
save your filter from getting clogged.
Are you extracting to outside or have you planned on fitting filters aswell?

I MAY have solved "the problem"!
2

S
A guide to dust extraction
2