My workshop has eight four-foot fluorescent tubes in it, four of which are directly over my bench*. All have separate starters, etc., and are (for the technical) traditional neon-switch, mains-frequency units. One blew a starter recently, in a rather spectacular fashion**. The old tube works fine with a replacement starter, but it got me thinking about LED substitutes.

I looked at Toolstation's offerings:
(a) they're expensive (I don't really have 90 quid to spend on replacing functional tubes across the entire workshop at the moment), and
(b) more importantly they seem to be half the light output of the old "Pluslux" tubes. Pluslux ("triple phosphor") are around 3500 lumens, but the LED ones are 1800. This is an issue: I'm all for being green, but I need to be able to see what I'm bludgeoning!

I realise Toolstation isn't the best place to look necessarily, so anyone got any better suggestions? That said, I've bought some of their LED lightbulb-replacements, and the family are complaining that the dining room is now too bright!

Ideally i'd like to stick with 4' fluorescent form-factor as ther's no rewiring involved, but I'll consider those flat panel jobbies as I've heard good things, but I normally have around 12,000 lumens over the bench (white reflectors to direct the light downwards).

*actually five, but the four are in a single luminaire, with one extra on a ceiling beam.
**never seen a neon explode that way before - melted the glass, blew the side out of the starter and could have caused a fire. Interesting, as I thought the filaments current-limited it.
E

In case anyone is interested,here are two starters for comparison porpoises. Guess which one failed... ;-) 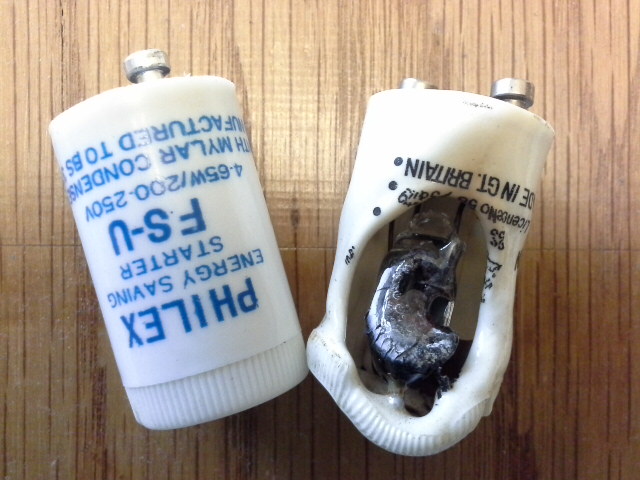 have a look at this thread for some ideas:
led-panels-t112487.html

I used these ones in my recent workshop fit out Eric, not cheap but worth every penny I reckon as the light output is very good indeed for my needs.

From memory there are two six foot units along the length of the centre ridge beam in a 12x20ft workshop with apex roof, and those are bright enough by themselves for most situations. Not wanting to work in my own shadow at the bench or wherever though I had four of the five foot installed also around the perimeter at the junction of wall meeting roof slope.

Luckily I had the roof ones wired to a separate switch so I can have either or both sets on at any given time, and to be honest either set would have been more than adequate, the combined effect is overkill and I rarely use !

A doddle to wire in too.
L

I used the 4ft version of those Screwfix ones, no complaints here.
M

I retrofitted with Osram daylight balanced led tubes/starters a little while ago and have nothing but good things to say. No delay, no hum and much brighter than the fluros.

Can''t remember which site though - there was quite a spread on the pricing.
G

I do prefer LED lighting but we have just had the calibration lab retrofitted with 600mm Panels instead of fluorescents and the light is far too cold (supposedly daylight). Everything lacks detail which isn't a good thing in a calibration lab. A warm white would bring out more detail and feel much more comfortable. Something in the range of 4300k would be perfect
T

Eric The Viking":ogp9d32s said:
(a) they're expensive (I don't really have 90 quid to spend on replacing functional tubes across the entire workshop at the moment)
Click to expand...

Now, I bought new fittings as well, since my inherited ones were rusted to heck and I didn't trust them - But I believe you can simply swap your fluro tubes for LED ones as long as you also replace the starter... and every tube comes with a starter included.
You could get 8 of the 4' LED tubes for under £60.


Eric The Viking":ogp9d32s said:
(b) more importantly they seem to be half the light output of the old "Pluslux" tubes. Pluslux ("triple phosphor") are around 3500 lumens, but the LED ones are 1800.
Click to expand...

LEDs work differently. The lumens may be lower, but the end result is much brighter. I'm not sure of the science behind it, but the difference is surprising!
Even the small 3.2w clip on lamp I bought was supposed to be a 25w equivalent, but is brighter than the 60w one it replaced!

The key is choosing between Warm, Cool and Daylight - I personally went with Warm and it makes the workshop seem so much nicer a place to work.
S

I bit the bullet and splashed the money on a couple of Gewiss Smart[3} battens bought through Edmundsons. 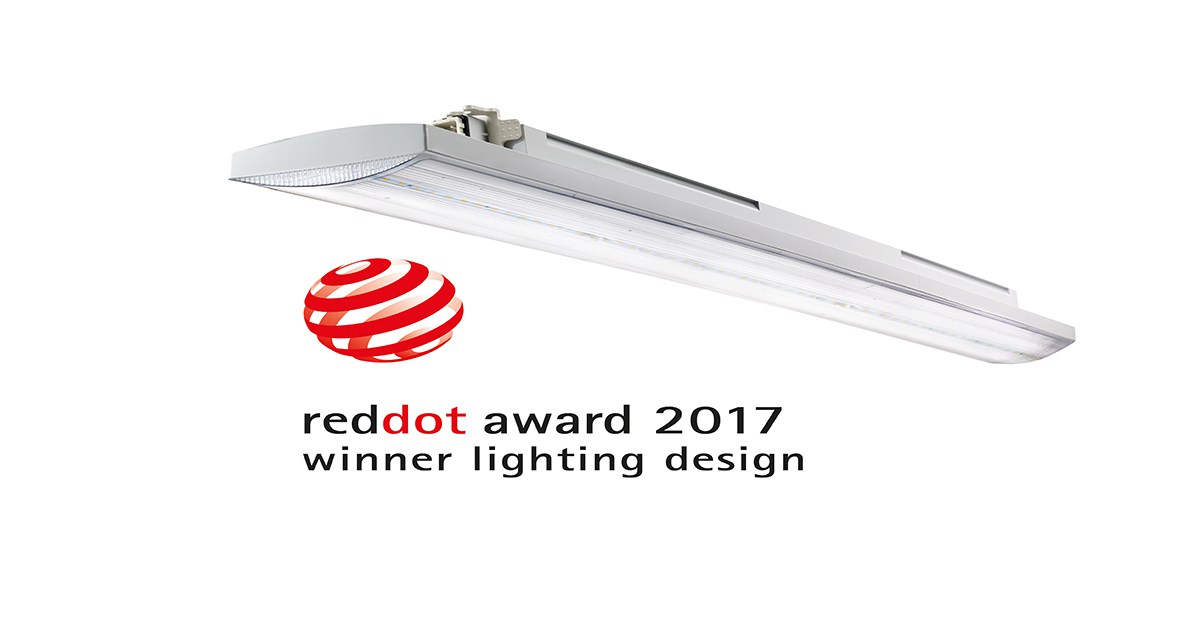 They cost about £150 for two but their design is tops, IP66 rated so no issues ever with damp or dust and the two units effectively replaced four double fluorescent fittings.
I want to wear a baseball cap indoors they're so bright !

And each to their own. but I hate bad colour tints on LED lighting.
Second the previous post that choosing a warm white is far easier on the eyes.
LED's all have a "colour temperature".
6000K is a harsh blue white light - bright but hard work on the eyes and not a good fit with the colours our eyes are most sensitive to
4000K is generally accepted as a "neutral" clean white light and the limit of what I'll live with
2700 - 3000K is a true warm white similar to a filament bulb. That's what I would want in my living room, but I chose 4000K for the garage.

I know these most likely won't be suitable as a solution for a variety of reasons, mostly there's better options out there, but I fitted 3 lidl led strips to my shed alongside a few salvaged office multi tube lights I saved from the skip at a building I was working on.
The leds weren't expensive (lidl) but the difference is notable. I should have bitten the bullet and gone for 6 strips and 2x led panels above my two main work areas. Free is not really false economy but when the new bulbs start to fail on the old tube lights I will strip them out and replace.
Point being even the cheapo lidl leds put the 4 tube trad lights (think suspended ceiling office lights mounted on the shed ceiling with grub screws) 'in the shade'. There's no comparison.
I only post because I wish I hadn't tried to wing it. False economy. Properly planned lighting. Another thing I didn't know I didn't know about. :|
Cheers now.
N

I've got four of these fitted in my workshop. Nice and bright, much better than the fluorescents I had before.

(Didn't buy them from this seller though.)
O

Location
&quot;From a long time ago in a galaxy far, far aw

I've used these elsewhere but will be putting my workshop soon https://www.tlc-direct.co.uk/Products/KBBAT4.html

Thanks everybody. I have a feeling this ought to be a sticky thread - so much useful stuff.

Right now I'm up to my neck in external masonry problems, trying to get finished to a deadline when I'll lose my scaffolding... so can't go shopping for new tubes. But it's all filed away for use as soon as posible.

Eric The Viking":h9ycno34 said:
Many thanks again,
Click to expand...

Thank us by posting pics when you get the new lights up!! :wink:
E

I'm in the middle of a large extension on the house and wondered how best to light the garage/workshop. Floor area is 10 x 5.5m with two open loft area in the 4.5m high roof.
I have gone for this range, https://www.novelenergylighting.com/led ... 00964.html
6 x 5ft 55w for main area along with 1 x 4ft 21W and 1 X 5ft 30w for the loft areas.
They are not cheap units but the quality is excellent, easy to install and I could not find a better price for the same product anywhere.
High impact resistant diffusers, 4000K light temperature, 50,000 hrs life expectancy and 5yrs guarantee sound promising.

When we were having the house built a couple years ago I went on the hunt for affordable lighting for the workshop. I didn't have any fixtures to start with like you have and I couldn't find any used in decent condition and any tubeless fluorescent in the stores were too expensive and I'd have to toss the new ballasts to put in replacement LED tubes. New LED fixtures were even more money.

So I started looking on Alibaba, the Chinese selling site, and after communicating with sales reps from several companies found one that had the Canadian certification the electrician required and lights that were about a third the cost delivered compared to what I could buy locally. So I ordered 22 fixtures (16 for the shop and 6 for the garage) and had them at my door in about 2 weeks. My research pointed to having 100 foot candles per square foot (1000 lumens per square metre) and my phone app measures that with the shop's OSB walls unpainted. When I eventually get around to painting them white there should be more light reflected around. My shop is about 640 square feet (60 square metres) thus the 16 fixtures. They were 5' long x about 1 1/2" wide and high. 4000 lumen, 6000K and came with mounting clips and cords to connect. Total cost was about $520US plus tax when they got here. They can be connected together with the provided cords or butted together with the provided fittings which is what I did. I don't mind the brightness or light colour as it is virtually the same as on a sunny day at noon. Each to their own. If you want I can post the links to the company and the fixtures I bought.

Small led lamps are so cheap and efficient there's little point in worrying about the perfect lighting of vast spaces - put spots where you need a lot of light (and no shadows).
C

I don't think so

phil.p":rob64ydd said:
Small led lamps are so cheap and efficient there's little point in worrying about the perfect lighting of vast spaces - put spots where you need a lot of light (and no shadows).
Click to expand...

Each to their own but I disagree. For something fixed that you work at in a single position like a drill press, a lathe it is a partial solution. I don't see how I would put a lamp on my jointer, surfacer to you, and not have it in my way and the same applies even more so to the table saw sitting in the middle of the room. I hate stepping on cords by the way so the fewer the better. So I am a flood the room with tons of light and if needed a few task lights where I really need it. The grinder for instance.

I suppose I could wear a headlamp most of the time. Nah it'll get in the way of all the other PPE on my head.