Working for free for learning and experience?

Hi. To make a long story short, I'm 26, and have no real experience in wood working besides when k was in school. I'm planning on taking a carpentry and joinery skills class in late Feb, which is about 15 hours total training over 5 weeks, but besides that, I was going to ask around to see if any local joinery's would be willing to take unpaid labour in return for teaching me how to do it.

I'm physically fit, hard working, and I like working with my hands and creating things, and woodworking is something I am especially interested in, and believe I would truly enjoy it.

The problem is, I can't dedicate full time to it, as I have a full time shift work job, which usually only works from 13:00-22:00 any 5 days of the week, but I can spend a few hours before work, and on my days off.

Has anyone been in the same situation as me, or can offer advice, especially if you personally run a joinery and what you would do?
L

Do you have basic tools and space to work at home?

I think I would try stuff on your own to maximise the training time.
You hardly want to waste the 15 hours on elementary things you could learn on your own.
Then look for part time experience post your short course.
E

Hello! I was in almost the exact same situation as you a couple of years ago and it is indeed tricky.

What worked for me was to slowly but surely build up skills at home from reading, watching and doing. My first project was a proper workbench - an intimidating thing to start with but perfect really as it forms the basis of all further woodworking.

Finding an area of woodworking that appeals to you and devoting yourself to that is also helpful - for me it was Windsor chairs and timber framing. Even one of these will take a lifetime to truly master.

Finding an area you particularly like also means you can go on courses that are more likely to resonate with you and you'll be making things you're motivated to make.

This approach does take patience but for me personally it's been great. I now get paid to make stuff! Amazing!

Also, don't rule out working for free/volunteering. It can be truly rewarding and will often present further opportunities. That isn't to say you should let anyone take advantage, but volunteering for instance can be great especially as a beginner because you can go at your own pace, no pressure, learn as you go.

Long story short - do what you can and if you really enjoy it and persevere with it you'll get to where you want to be.

lurker":1iad2nnh said:
Do you have basic tools and space to work at home?
Click to expand...

El Barto":1iad2nnh said:
What worked for me was to slowly but surely build up skills at home from reading, watching and doing. My first project was a proper workbench - an intimidating thing to start with but perfect really as it forms the basis of all further woodworking.
Click to expand...

At the moment, I have some space, but no tools at all. My fiancee and I just moved into our first home, and do not have much excess funds to speak of. We do have some, and I am willing to invest in this, as it is something I can see myself doing in 10 years time.

I have a shed, as luckily it came with the house, and it has a desk, some sides to work on, and a filing cabinet, and it's not exactly completely weatherproof, but it is in good nick.

I just measured it, and it's roughly 4.7m long, and 2.3m wide from the walls, less if I include the space the sides take up. I would post a few images of it, to better understand what I mean, but I can't yet. I was thinking of expanding it out so it covers the outside area as well to basically double the workspace, but I wouldn't know how to do that right now, so that's a future project.

Finally, is there a list of the most basic equipment I would need for any project, and what's the cheapest I could go to get them? Like I said earlier, I'm not broke, but I'm not exactly rolling in cash either. I don't mind working for free, because as long as I learn what I need to learn, and I am still earning enough to get by, I'm fine with that, because it'll be worth it in the end.

Thanks for the help

Here's the images of the shed 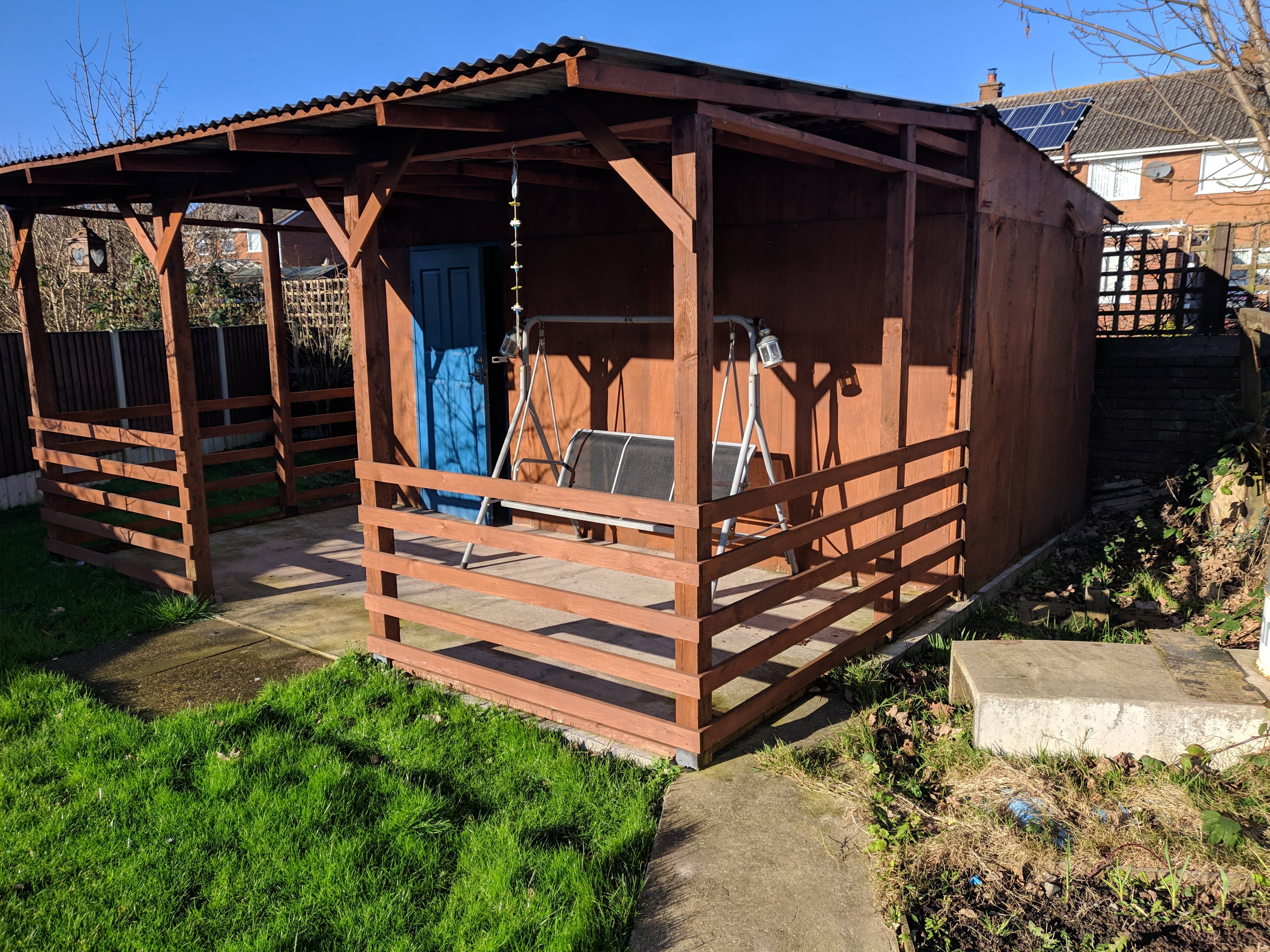 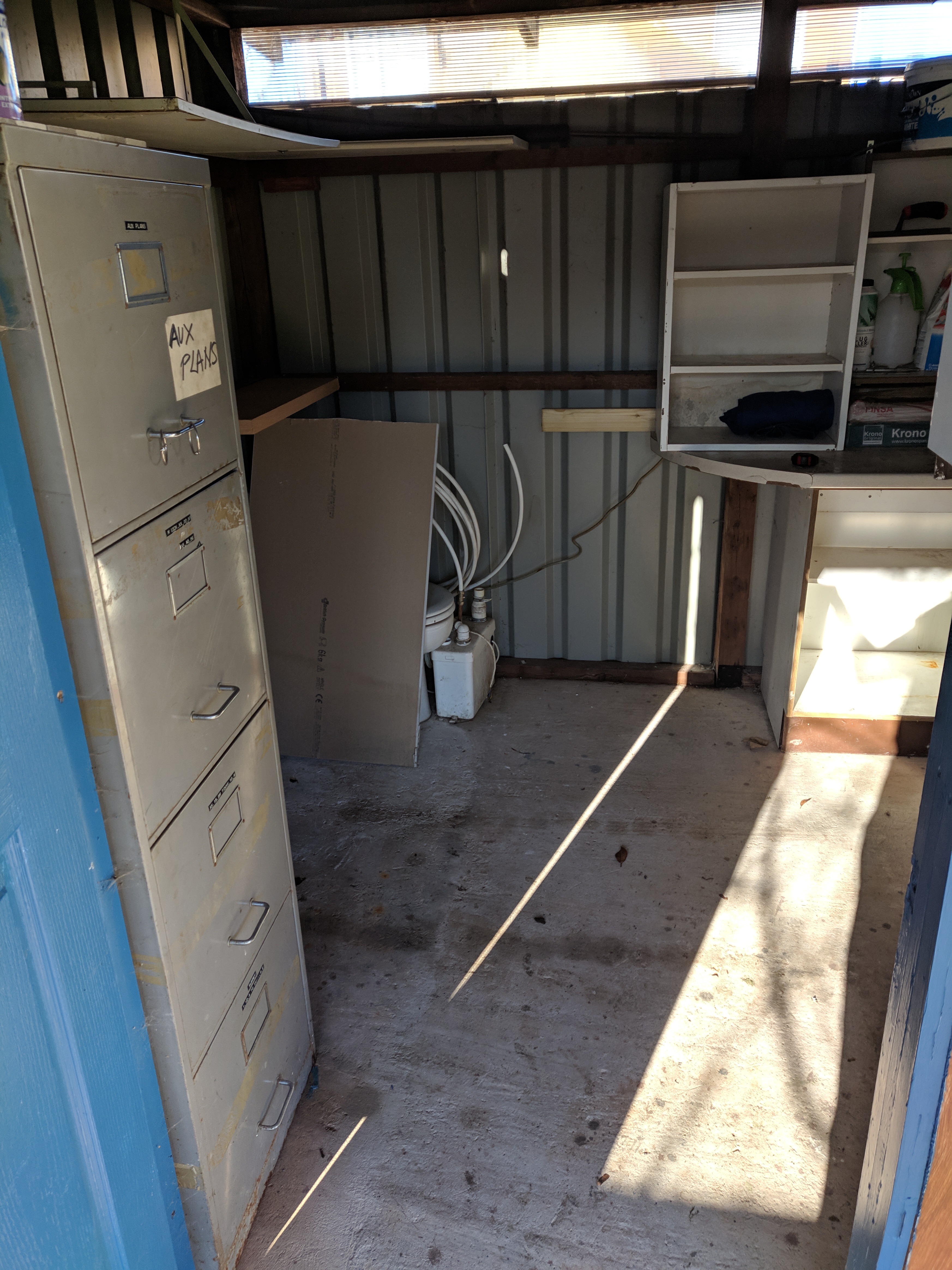 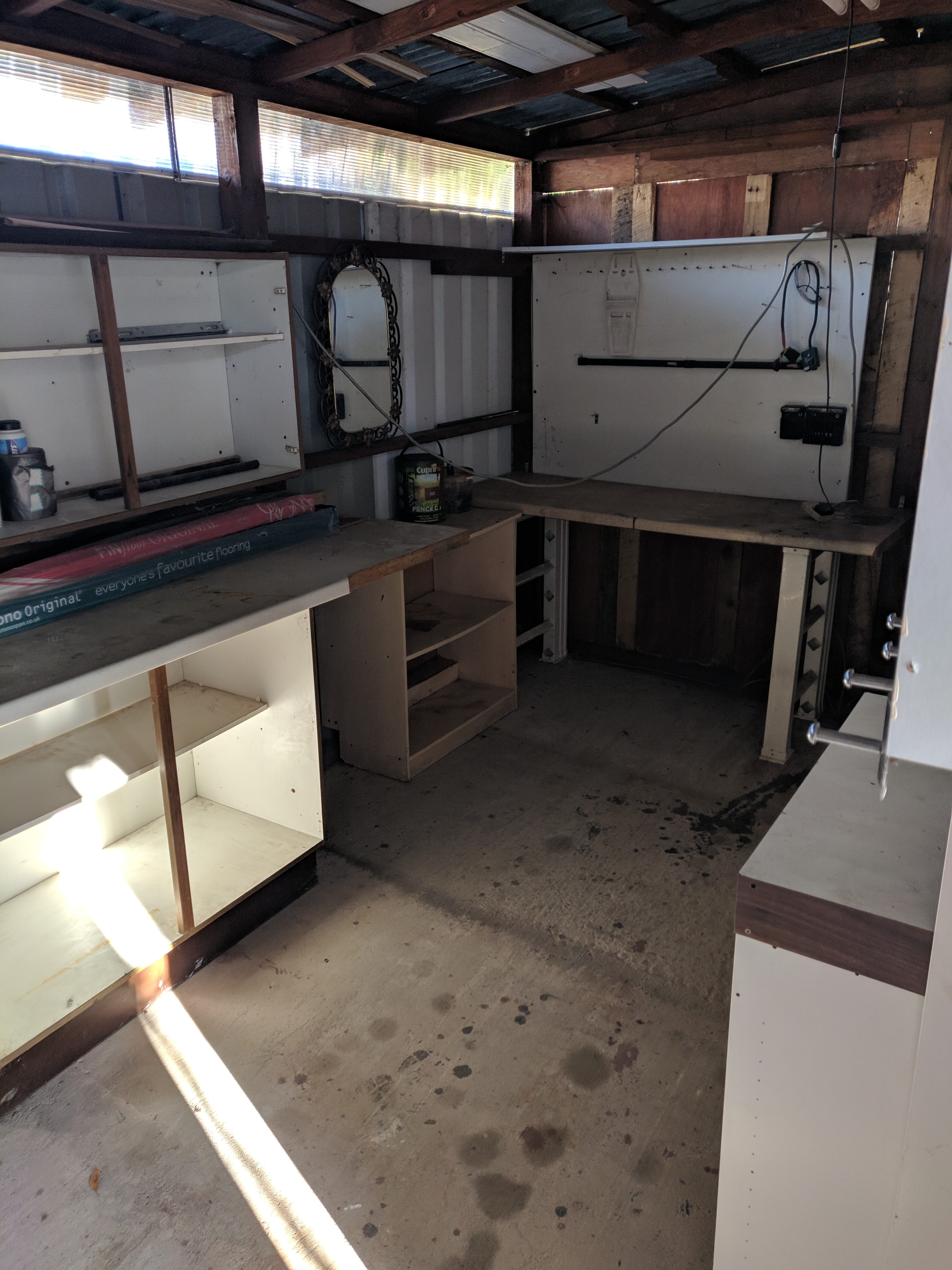 Have a browse on this site for recommendations about tools.


Also try to find the post where MikeG makes some trestles.
This would be a good first project requiring few tools and cheap wood but producing something useful that should last a lifetime .
The marking up and cutting will be an invaluable experience

This question comes up a lot more often than you might think.
Tools (especially machine tools) are expensive. Dont waste your money on a list that someone else gives you. They will give you THEIR list, which is fine for what THEY are doing. Decide on your first project (like a bench ) and buy tools that you need to make THAT project.

Theres a lot of very skilled people here (that does NOT include me), but sometimes they forget they are being asked questions by penniless newbies. :roll: :lol:
E

A proper bench is helpful but by no means essential. It sounds like you have a good place to start from at least.

In terms of tools, again what worked for me was to only buy what I needed for each job, rather than get a whole bunch of stuff I didn't know if I needed. Second hand tools are also the way to go - if you buy one plane in need of some care, get it cleaned up and sharp, you will have laid the foundation for cleaning and sharpening every tool you'll ever need.

There are loads of lists on this site of tools to get you going, I'll try and find one.
L

FH93":ygovjjnt said:
Here's the images of the shed

Blimey That is a very good space in which to get going!
Add 50 quids worth of hand tools and there is nothing stopping you.

Thanks everyone for the advice, it means a lot. I can't find MikeG's trestle project, but I get where you're coming from El Barto. I'll just see if I can find a simple project, like a workbench, and see what I need as the basics to get it done. I'll just have to travel the internet and local cash converters and the like to find the tools I need.

you have a much much better and bigger space than me! start off with a decent workbench, it will set you up for life. You won't be able to do much without one and it's an ideal first project.
L

Steer clear of cash converters!
Their prices are stupid!

Okay, I'll definitely disregard cash converters then. I'll probably stick to Facebook marketplace, and post in the marketplace on here then.

Where's the best place to look for a plan to make a decent workbench?

Good luck from another newbie.

I am (slowly) going to give myself an apprenticeship - in other words, complete the tasks that your average apprentice would have to do. The caveat being that I have to fit this in around other, more fun stuff - by fun I mean higher priority, rather than more fun to make - I have to fix some window frames for example, which won't be fun. First up will be making some tools: marking gauge and a mallet. Then I should be able to make a decent bench. Before all of that I have to enlarge the tool shed to make a workshop, so things aren't necessarily taking a linear route.

Here's the sawhorse thread: on my list too: saw-horse-build-t118971.html

Oh, and regarding volunteering, have a look at helpx.net and workaway.org - you may find something useful there, but I would suggest you make stuff for yourself, rather than for someone else.

With all due respect to Mikes design there are simpler versions that can be built without a bench and a vice (use a step or some breeze blocks or the kitchen table) or experience. A quick google will find plenty of free plans like this for example.

Now you can use them to make life a lot simpler and support your work. (you can also Chuck an old fire door over them and you've got a table.)

Now you can build a bench...

May be worth contacting your local wood recycling project, ours in Southampton has a lovely workshop where they turn out some nice bits of woodwork...
T

FH93":16tlvuqa said:
Okay, I'll definitely disregard cash converters then. I'll probably stick to Facebook marketplace, and post in the marketplace on here then.

Where's the best place to look for a plan to make a decent workbench?
Click to expand...

What area are you as will help if close enough

This is going to sound harsh. It not meant to be, just realistic.

A skilled teacher is going to want at least £30 per hour for their time. An unskilled (yet! ) labourer costs just minimum wage (and is probably not worth even that, to start with). There is a huge disparity in term of time one can/must give the other, in order to get a sensible deal.
I was lucky. Both my dad and my granddad were woodies, so I learned a lot by osmosis as I was growing up. But I did not start to develop any serious skills until my 20s, after buying my first home (lucky there, too, by today's standards - I would not want to be starting out now).

Those skills came about by doing a great deal of reading, mainly Woodworker, Practical Woodworking and books from the library. Later I discovered Fine Woodworking and then Good Woodworking came along, for which I wrote for over a decade.

I can pass one piece of advice that my dad gave me when I was starting with my own place:

"Buy a new tool every week. It doesn't matter whether it is a screwdriver or a tablesaw, buy something when you get paid."

Now my dad was paid weekly, so that made sense for him but you get the point. Make building up a took kit a priority for your spending.

In my day, there were several proper tool shops in Nottingham. Mibro, Pools Tools, Hopkinson's. Black's in Chilwell. All gone now, all gone. But we do have the Internet instead and TBH, prices are lower now, relatively speaking, than they were then.

I still have the very first tool I bought this way, a 1/2" Firmer chisel from Mibro.

So, in short:
a) Prioritise the tools you need
b) Buy the best you can afford (it doesn't have to be Lie-Nielsen, but try to do better than Silverline for anything you are going to use regularly)
c) Buy regularly until you have your toolkit established.

Very good luck to you.

"Buy a new tool every week. It doesn't matter whether it is a screwdriver or a tablesaw, buy something when you get paid."
Click to expand...