I have finally finished the build of my split top workbench. It is suited for my left handiness, in case you are wondering why I have the vice on the wrong side.

It lacks usual features such as sliding deadman or houndstooth dovetails. Build quality is far from being premium or even heirloom quality. But I am quite happy, as the bench is solid and does not rack. I have built it mostly with hand tools, but used a thickness planer for thicknessing and the top was jointed and thicknessed by my friend, as it would take too long to joint it with a hand plane. 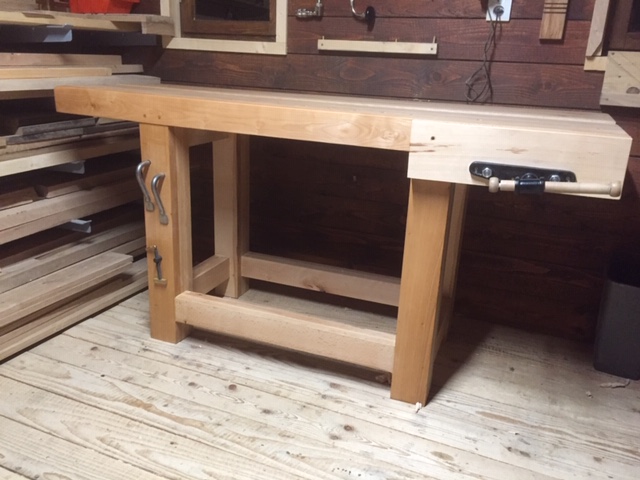 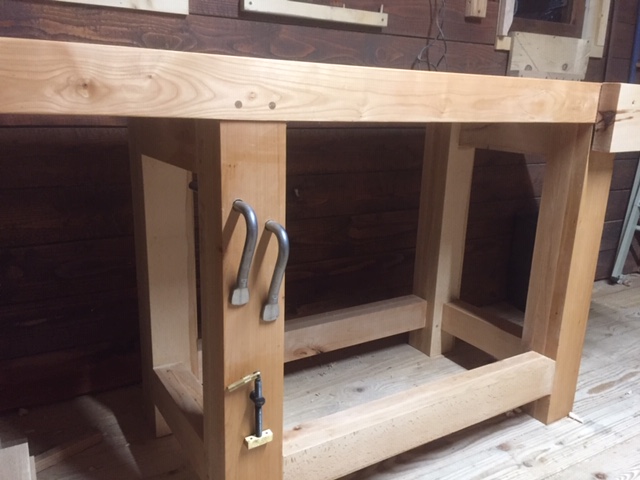 Some useful features:
1. real split top. This is not like those fake split tops when people put a solitary board in the middle to prevent things from falling down. On my bench, if you do not watch your cast iron block plane carefully, you will surely find it on the ground. It is only for brave or OCD-level tidy people. The reason for this is that I asked my friend for jointing and thicknessing boards. His jointer has short tables so the boards came bowed. I had to hand plane them to get something resembling a spring joint and thus I got some thickness off of each board. I had prepared middle board from cherry, which was 5 mm thicker than the theoretical gap. After I planed down all the boards, the resulting gap was actually 10 mm wider than the cherry board.

I will cut that cherry board in half to fill the gap, so it will lay face-side down. There will be 50 mm well in the middle. I might fill it with epoxy and call it a river table , or I might just put tools there as it is common. It is wide enough for my hands to pick up tools from there. 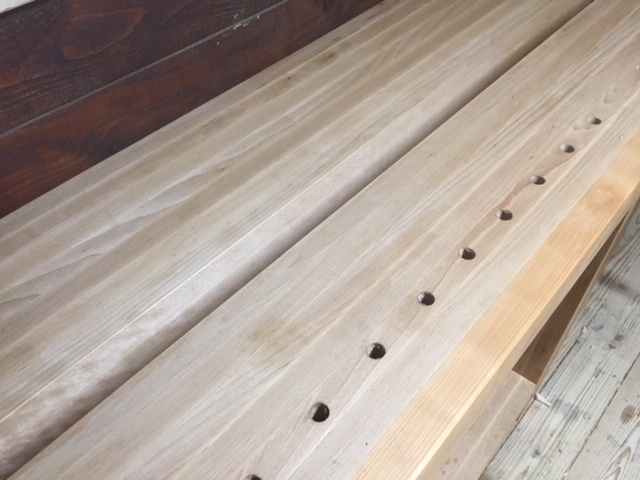 2. RPS. Racking prevention system, which I have not seen anywhere else, but my knowledge of other workbenches is limited. This system consists of a furniture leg with a thread, a threaded insert nut, and 127 other proprietary components. You just put the furniture leg with a screw to the nut that is almost level with the thickness of the board that is held on the opposite side. When you lock the vice, it holds the board firmly. It is much more practical than those millions of plastic cards that you need to match the thickness of the board, which are commonly sold. Go to the hardware store, buy a leg and a nut and make yourself one before someone patents it, and will proudly sell it from Maine or Ottawa for just 129 USD per kit. 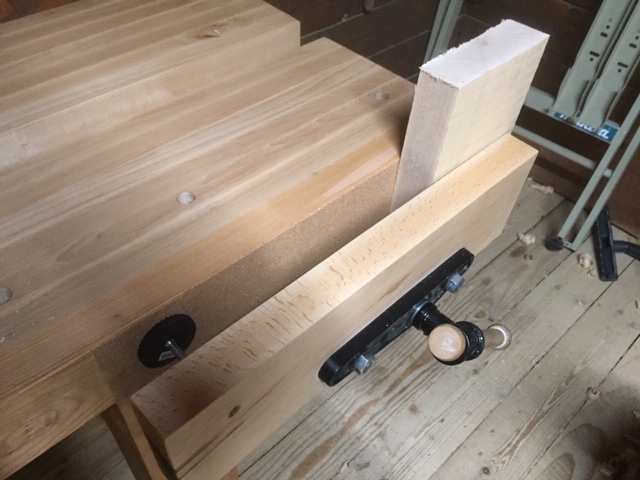 3. If you see so many holes in the top and no tail vice, it is because I have Veritas wonder pup, which I sometimes use when I want to hold the workpiece tightly.

4. I will build a planing stop later. It will be two dog holes and a thin board between them. Something like DYI Veritas planing stop.

I am aware that the vice board contains pith and might eventually break. I will create another one, once it breaks.
O

Very nice bench and the anti wracking on the vice is quite clever. I just may copy that. Thats a bench that will last a lifetime. I built myself a split top about 10 years ago and find it does everything I need although I have made a few small mods over the years.
Here is how I did my planing stop if it helps. 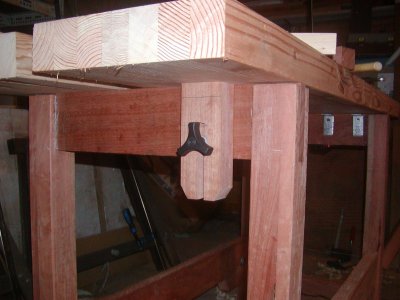 One mod was another stop with a toothed metal top that can be swapped with that one.
Regards
John