There was a thread recently about dealing with the sapwood that you regularly encounter when working with Walnut. My general approach (and the one widely used by most other furniture makers) is that you apply a wash coat of a regular aniline dye to the entire piece and then build up the colour specifically in the area of the sapwood. You can get aniline dyes as water based or spirit based. The spirit based ones claim to be more lightfast, but after using these products for over thirty years I've never found much difference in lightfastness between them, the truth is all aniline dyes are pretty poor in this respect. The main difference is that spirit based doesn't raise the grain and dries within seconds. I always say that unless you're an experienced finisher you should stick to water based, which maintains that critical "wet edge" throughout the job and therefore makes blending in much easier.

Looked at more broadly this general technique is the backbone of so many finishing tasks; matching in sapwood, patching in new timber with antique restoration, blending in colour variations across a complete piece of furniture, adding some pop or warmth to timber, reviving faded wood; they're all finishing tasks that are generally based around using aniline dyes.

But the big shortcoming of aniline is that it fades in sunlight. Pigment colour doesn't fade nearly as much, but it's difficult to use (especially on open grained timbers where it pools in the pores and just looks really nasty), and it obscures the grain and dulls the life and vitality of timber. The fact is pigmented stains are halfway to being paint, so their relevance to fine hardwood furniture is pretty limited.

I was interested when Marcros flagged up a relatively new alternative dye called Transtint that he'd picked up in the US. It has a radically different chemistry and claims to be significantly more lightfast while still fully dissolving (as opposed to being in suspension like pigment). He very kindly sent me some samples to test and I promised I'd post the results. So here it is, thank you Marcros! 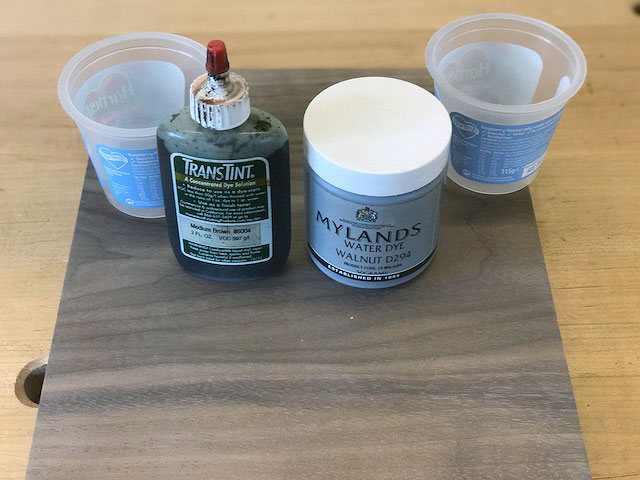 I used an offcut of Black Walnut and mixed up some Transtint Medium Brown and some Mylands Walnut Stain according to the manufacturers instructions. I didn't have two directly comparable colours to test, but Transtint do offer a "Dark Walnut" and a "Mission Brown" which are both cool toned and would be very suitable with Walnut. In terms of ease of mixing up there's not much in it, I use powdered aniline dye but Transtint is a liquid, it doesn't really make any odds. 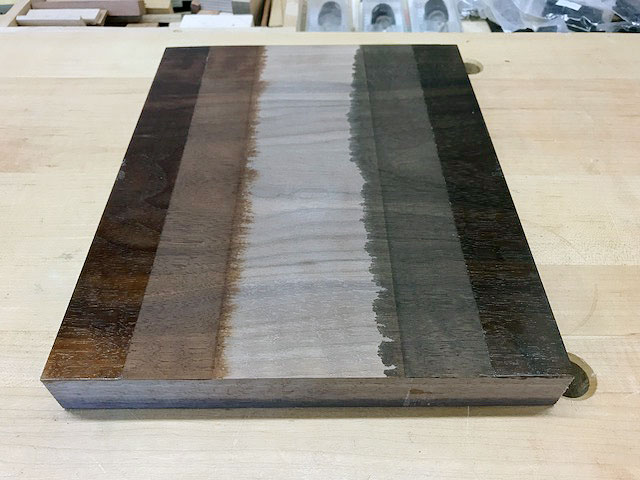 Transtint is on the left in this photo, bare timber is in the centre, and the aniline dye is on the right. The outside strips of both edges have had a couple of coats of Satin Osmo.

It's difficult to tell from a rubbish phone photo, but there does seem to be a small added brightness and clarity to the Transtint product, it tends to bleed a bit less too. But both products are fairly equal in terms of their ability to convincingly blend in sap (again hard to see in the photo, but the sap bands were fairly distinct in real life). I separately tried mixing different shades of Transtint dye and it's excellent, showing no tendency to separate out or "rainbow".

Like aniline dye it seems to be widely compatible as a stain used under another finish, but it also appears to have some restrictions when used as a colouring component within other finishes. That's not too big a problem, unless you're a professional finisher or using it for a specialised finishing technique like those sometimes encountered in luthier work, then you're unlikely to want to incorporate a dye within another finish.

The thing that most interests me however is Transtints claims for significantly enhanced lightfastness. So I'll mask off the bottom half of this test board and put it in a south facing window for a few months and see what happens. If it really can deliver in terms of fade resistance then I'll certainly test further with a view to switching over completely. I can't find a UK stockist but it's available from US retailers like StuMac and Rockler who are both pretty slick with international orders.

Look forward to the results.

I've been trying a different dyes recently and quite like the fiebings leather ones. Fairly sure they're analine but not 100%. Oddly their brown ones seem far too red to me.

Watching with interest here too.
As you may remember, I'm planning to build a table from some very nice walnut which will be exposed to sunlight, once I get my act together and get the wood out of the basement!
I

AndyT":3phh1yvu said:
Watching with interest here too.
As you may remember, I'm planning to build a table from some very nice walnut which will be exposed to sunlight, once I get my act together and get the wood out of the basement!
Click to expand...

Well I wouldn't bank on Transtint if its going to be exposed, Andy - even though its a good product.

I think I shall have to learn to love the natural faded colour of the walnut.
C

Update on progress. It's been about a month since the test board went into a south facing window. Not that many sunny days, but this what it looks like now. The bottom of this board was masked from sunlight, the top receives the full suntan treatment. 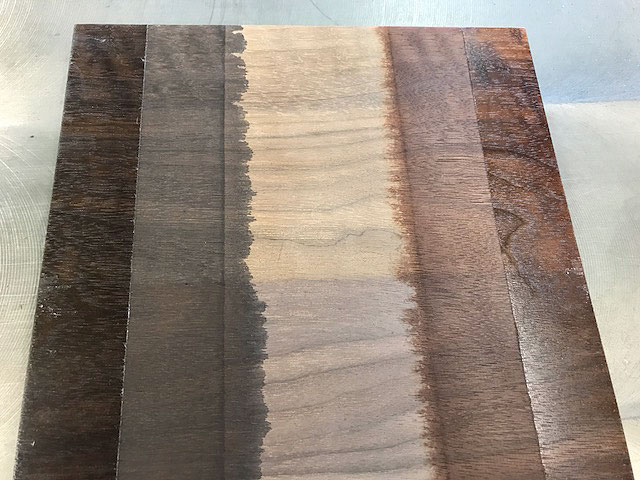 No surprises in that the unfinished American Black Walnut is already looking pretty sorry for itself. It's the worse dark timber I know for fading, and the steamed version (which is by far the majority of the ABW that you'll find for sale in the UK) seems to suffer particularly badly. Unsteamed ABW holds up to sunlight a bit better, and European Walnut holds up a bit better still.

But I don't think we can make any conclusions yet regarding Transtint versus Analine, both of these dyes are translucent, so there's every chance that what we're seeing is the ABW fading underneath the dye. I'll come back in the autumn when it's had a bit longer in the sun (if we ever get any more sun of course!).

Some luthiers use a UV light to artificially fade their dyes - notably on LP burst builds. Get down to your local tanning shop, Custard.
C

I took another look at progress, this is after 2 1/2 months in a south facing window. 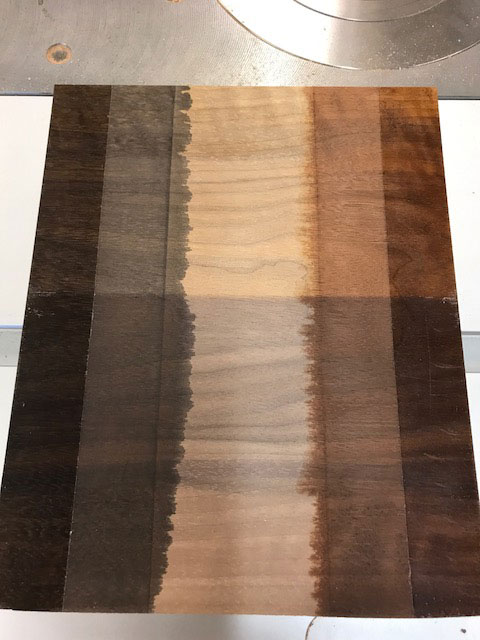 It's difficult to make out from a phone photo but there's now a small amount of colour shift in the aniline dye, it's starting to show a slight greenish cast (on the left), where as the Transtint (on the right) remains true to the original colour. I suspect the fading we're seeing is primarily due to the Walnut itself fading beneath the dye. I'll leave the sample board in place, but I doubt there'll be much more fading until the sun comes back next spring.

There isn't much in it, but Transtint is showing enough of an advantage that I'm going to start trying it out on some real projects and seeing if it lives up to the claim of being equally effective used in either water or alcohol.

Regarding the transtint - I don't suppose you have discovered a UK distributor yet have you? I've been aware of its existence for a while courtesy of luthiery forums.