Whats the thoughts on this type of belt/disc sander

I am considering getting one of this style of disc/belt sander, for light workshop duties, as I have the potential of some small paying jobs coming up and my palm sander is getting rather elderly. They appear to be a badge engineered product, the one illustrated is a SIP, but the Charnwood looks the same and ther may be other versions out there.
I just woindered what your experiences has been with them - thanks

This machine is also badge-engineered . . . mine is exactly the same but from ALDI for a lot less money!
S

I purchased the SIP machine you have looked at and it is a solid machine for the money, with a 500 Watt motor. It also has mitre slots in both tables and for the money it is good value. The only thing you would need to do is remove the sanding disc it comes with which are adhesive fit and fit a hook & loop backing pad so pad changing is easier, from here Draper 52612 Self-Adhesive Hook and Eye Backed Backing Pad (200mm). Belt changing is also straightforward and can be done quickly. As for belts and disc I get mine from here Abtec4Abrasives | Grinding Wheels Belts Discs Rolls & Sheets and purchased the machine from here SIP 01946 4" x 8" Belt Disc Sander using Klarna.

I have something similar and I wouldn't be without it. Really good for sharpening things. However, I also had a handheld belt sander which died, and I miss it dreadfully. Clamping it to a bench, or upside down in a vice, is more versatile, and all the various bits on the grinder style don't get in the way. I really must get another one, but not Black & Decker this time.

Not having one of those, but a more traditional style of 6x10.
My ones (an old axi) doesn't have as good a design for the belt,
and uses a slightly delicate cogged belt rather than a v belt on some I've seen like this one...


Delicate as in if you grind some primary bevels on your tool steel,
whilst using it for all sorts, may have a tendency to start a fire.
My belt got a bit damaged from this,
and the thing was not easy atall to dismantle, I had to cut big gaping holes into the plastic to get access,
It's not been bolted to the base since.

Another thing is the table is small on the one you've pictured, maybe the smaller belt is sized for it, but I assume its a hungry beast.
I wouldn't want to be profiling the end of something long and heavy with that.
There's a flimbsy bit of sheet metal on mine, which I've thought of
sorting, so it's probably why I might be keen on the idea.

The other tables seem about right for the disc, as you can only use so much of it, or it will fling the timber.
The only problem is the abrasive doesn't last long for these discs and are prone to burning,
(a bit tight me for that changing adhesive discs malarkey)
The biggest issue with mine is, you have to keep flipping the piece
so you end up with a crowned profile.
Maybe that design may be better on your machine.

I suggest looking into getting a standard one, and making an edge sander out of it instead, as using the edge of the drum would be a lot less jumpy
for concave profiles, you'd have a faster, easier and more accurate
machine all round.
No need to rush making it in the meanwhile, but a nice project if the job
is large and calls for a table of some sorts.

Maybe I'm wrong on my assumption that it wouldn't be as suitable for the job?

I have the Warco version, very handy piece of kit. As far as I can see its identical to many of the other brands like the clarke, just painted a different colour and with a Warco sticker, so generic Chinese. Only thing I would change is the quadrant that locks the angle of the disc table is a bit flimsy, in fact you can see that in the image. I have always intended to replace that with something more sturdy, but have yet to get around to it mainly because it hasn't proved to be a problem. And agree that the stick on discs are best replaced with hook and loop. Mine is used for metalwork and has been worked pretty hard on occasions but never missed a beat.
G

I have the Axminster version of that machine. Agree with the comments about the table supports. Otherwise, it works well, the dust extraction is good. I’ve mounted mine on a cabinet with a rotating top (on a lazy susan bearing) that makes it easy to choose either belt or disc.

One essential purchase is one of the crumbly rubber disc/belt cleaners, which will extend the life of the abrasive no end.

Because a disc offers a flat surface which a belt already does I opted for a belt/bobbin machine which made more sense for me, especially as the belts used are the same as my Makita belt sander uses.. 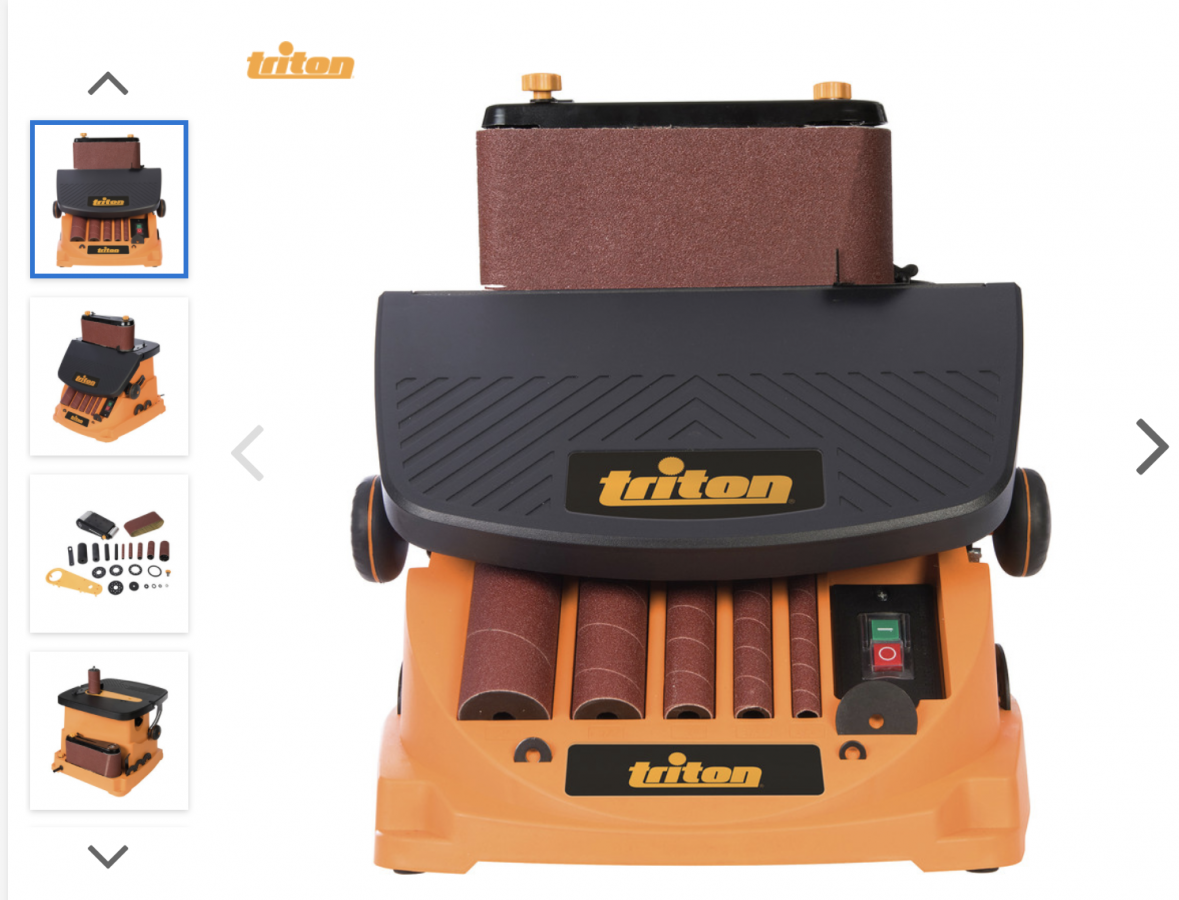 Thank-you one and all for your thoughts and hints. I must admit I have never heard of a belt and bobbin machine, so I shall give that a great deal of consideration. One question though, are they very robust, it looks slightly plasticky from the photo, how does it measure up in practice?

t8hants said:
Thank-you one and all for your thoughts and hints. I must admit I have never heard of a belt and bobbin machine, so I shall give that a great deal of consideration. One question though, are they very robust, it looks slightly plasticky from the photo, how does it measure up in practice?
Click to expand...

Understandable reservation and one I too held. It’s certainly not upto the standard of wadkin or similar industrial equipment but for most folks I can see them being adequately robust. The first thing that surprises you when you see one in the flesh is the size of it. The plasticky nature of it isn’t actually too bad as it will obviously be resistant to any corrosion and as I’ve used mine on quite a lot of steel that’s definitely a plus. Of the 2 knobs on top, one is for tracking the belt and the other is to attach either the belt sander attachment or a bobbin instead so changeover from one to the other is very quick and easy. The only things that I’m not overly fond of are :
1) when using the belt there’s a rest at right angles to it sort of like a small fence that’s held in place with another small knob but the fence is only 25mm high and 22mm wide..I’d prefer it bigger.
2) the dust extraction is pants but what can you expect when the abrasive will want to throw any dust in the direction of rotation and not down into a machine for collecting..
3) I’ve yet to find somebody selling replacement bobbins at prices I find reasonable although as I use it more for the belt I can’t complain

If you frequent maker sites on utube you’ll come across them quite often but to save you the hassle of looking here’s one by a dude I like who does quite entertaining commentary and although it’s not the same brand machine it certainly looks identical to mine: