What's the biggest mistake you have made in your woodworking

20 odd years ago I was all keen as the " then " wife asked for a bookcase to be made.
Off I go with a plan and all measurements , Start cutting everything our of sheet material , only to find it was smaller than the plan
What did I do wrong as a novice ?
J

Mate thus morning told me community bench slats were 70" so as I passed said bench and checked 71" 1.8m, so good job I checked....
R

Most recently, measured twice, found a discrepancy, then proceeded to cut to the old line instead of the new. A real facepalm moment.
H

Buying a load of Festool stuff.

And then Perry, my now ex-friend, discovered that I had inserted the dog strip back-to-front! B-u-gger. Looking through old photos I realised that the dry run had them the correct way, and I had marked them for the glue-up ... and then misread my markings. B-u-gger again.

A repair was complicated by the fact that the dogs angled 2 degrees ... now in the opposite direction!

Modifications as repairs are rarely satisfying. It is far better to have the Real Thing, even if this means pushing the envelope to do so.

The plan was to remove only the dog hole strip as far as the last dog hole. There is no need to touch the side board or the area for the tail vise, and the latter includes leaving the dovetail well alone.

I must say a big Thank You to Perry who came over on the weekend to help. I really could not have done this without him. The bench was rotated several times. Most importantly, Perry made sure I did not get anything back-to-front!

The main working tool here was a powered router. A series of guides were built to use with a bearing bit. The sides were deepened in a progressive manner. The trick is to rout close to the final dimensions only. If one attempts to hit the line first time, there is so much resistance from the wood that you may be forced with the grain and over the boundary. I routed to a few mm, and then took the final cuts at the line.

Also, the dog strip was used as a template for the "hole" by fitting it on top, and butting a fence against the edge. The bearing bit was then run against that fence. It required minimal tuning, and only a little chisel work at the end to square up. Of course, all this sounds easy, but it was exhausting as we worked for about 12 hours over the two days.

... keeping well away from the tail vise area ..

I had managed to beg another 4"x2" board in European Oak, and this was turned into a new dog strip with dogs 3" apart. This was an upgrade on the previous dog hole strip, where I joined pieces together having run out of this wood. It had look OK, but there were joins if one looked carefully. Now the strip was one continuous piece.

Checking that the strip ran in the correct direction!!!

A temporary planing stop while I fine tuned the insert ...

Here we are, glued up, the strip a little proud of the bench ... Perry looking on. Thanks again Perry.

"Oi, don't forget The Big Box of Shame with all that Lie Nielsen stuff in it".

"All that Lie Nielsen stuff too".

Another bookcase gaff here. For an alcove I measured up and made a breakfront bookcase over a 4 cupboard base. Lots of 18mm birch ply, mahogany frameworks, shelves, panelled doors and pelmet. I made it at an agreed size of 2.4m, that the client kindly checked. It should have been 2.5m.
Fortunately it all worked out five as the discreet 100mm infill panel meant the plumber was no longer need to relocate a radiator that was in the way of the end door when it opened.

Drawer bottom slot on the outside of a drawer.

I had marked it correctly, looked at the mark, nodded to myself that that was the correct side, then fed it through the spindle the wrong way round. That’s the time to take a tea break.

Worst I heard was a lad at my school, cut the end of his finger off on the table saw. The teacher exclaimed,
“oh God, how did you do that?!”
The lad, in shock, said, “like this”, and cut another finger off to show him how.
B

guineafowl21 said:
Drawer bottom slot on the outside of a drawer.

I had marked it correctly, looked at the mark, nodded to myself that that was the correct side, then fed it through the spindle the wrong way round. That’s the time to take a tea break.

Worst I heard was a lad at my school, cut the end of his finger off on the table saw. The teacher exclaimed,
“oh God, how did you do that?!”
The lad, in shock, said, “like this”, and cut another finger off to show him how.
Click to expand...

starting with mostly power tools (though now at least I know) and getting stuck in the cycle of buying this or that just to do every project (A gadget for the router table, something for the TS, a router bit set for doors, a coping jig, and on and on)....

Also starting with the idea that I would be trying to make a bunch of elaborate joinery that would *show* on the outside of the things I was making. It robbed me of thinking of wider design issues early on, and thus much of what I made early was square stuff that's not that natural looking or things like small bookshelves on the wall that had exposed dovetails all over them. They could've been more attractive (though nobody in this house would've noticed).

That second one would be my real bugaboo - and probably is for most people. Believing that design is something to consider later so that you're working a bunch of methods instead of to a standard and who cares how you get to it.

Asking the missus if she wanted a summerhouse in the unused corner of the garden. Thinking a 3mx3m ‘shed’ type structure.
Yes, says she, and started describing something akin to a pavilion. Ended up as this. 7mx4m plus decking for a BBQ! I’ve learned not to offer in future. 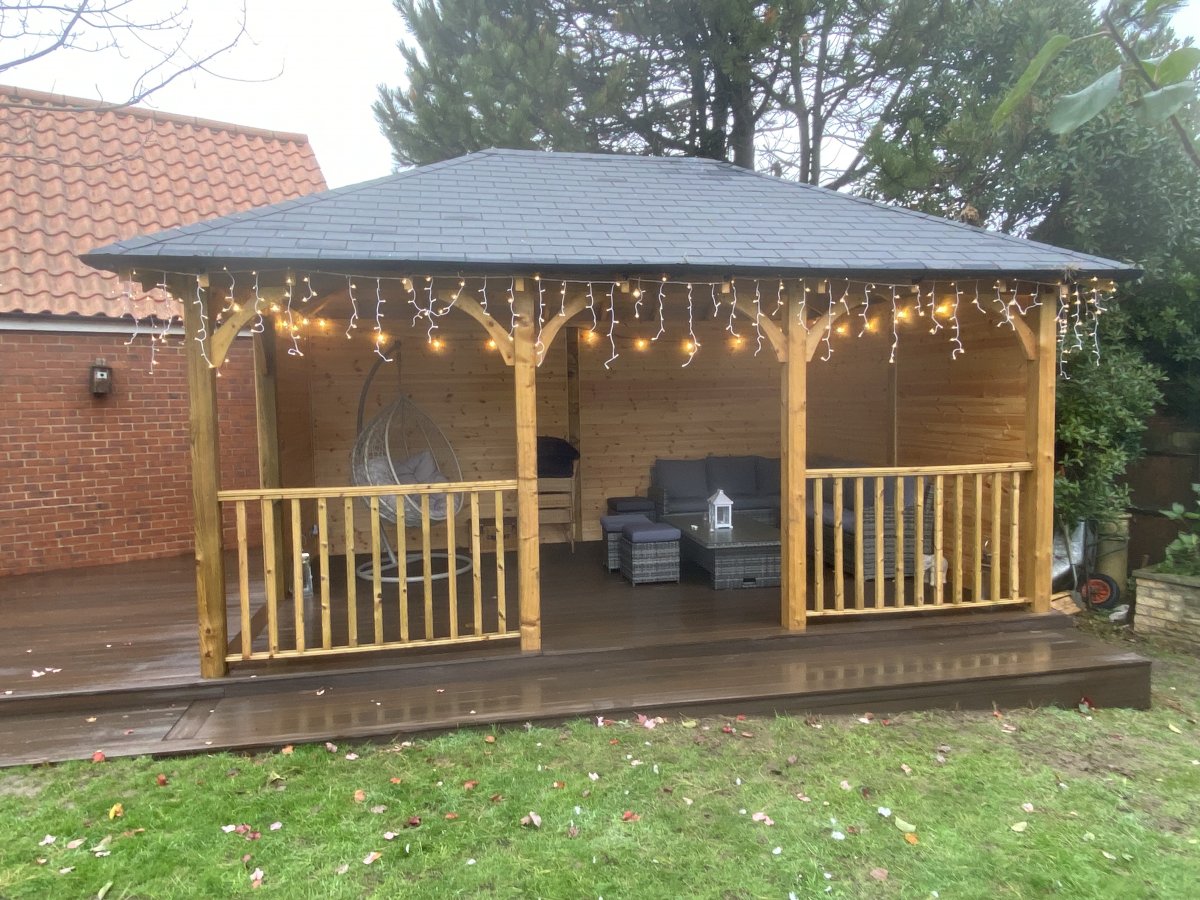 Making a set of 6 doors for a customer, 3 doubles for a wardrobe. Inlaid veneer pattern needed to be cut first with a scalpel , then routered/chiselled out,and fancy inlay put in.
Door 6. Overextended the cut line with the scalpel. Tried to hide it, filling, lots of sanding. Not a chance in hell.
Customer accepted the odd mark. Thanks god. Company i was with had a huge waiting list, so i think the 2 years she'd waited to get the units made she just happy to finally have them
TBH it wasn't bad, from most customers perspective, and i suppose it wasn't that visible given it was an ash veneer and the overextended cut was with the grain. But i could see it plain as day and it left me feeling rather unprofessional.
A real heads up to leave on a pencil mark where a cut is supposed to end.

selling my lie neilsen no85 and 102 block plane
A

Repeatedly buying pine timber from the likes of B&Q thinking its "good enough" to use, only to find in most cases it really isn't.
T

Absolute truth - I build the first of something now just to see what will be difficult rather than getting stuck in wading through being overly precious for no reason. Every mistake offers something, even if it may just be a reminder not to work on something while you're angry or not to keep going when you're not willing to check what you're doing once in a while.
D

The eyes in this case are dependent on the wood and the orientation. They come out crisp, smooth and with nice curves. if you try to go cheap on the wood, they won't look right and you'll miss the opportunity to develop the skill move (that being that work finished well by hand is usually done with a continuous (not fearful) stroke.

The beech in this case had some ribboning and a wonderful pinkish color. I didn't keep the plane. I didn't even charge for the plane, I made it and gave it to someone, but the aspects about the wood (not my making, but the wood itself) give me pleasure every time I look at the picture.

9 May 2022
Bingy man
B
M
A bit of recycling made my shop more comfortable.

Have you thought about who really can afford what you make and if it's something they actually want?

B
Returning to Woodworking - advice please
2