What do folk think about this table ?

I don’t particularly like the design (although I can see it wild great in the right kitchen/dining room), but I don’t think that price is at all outrageous.

The main things I’ve learned since I started woodworking as a hobby Is how much materials cost and, in particular, how much time it takes to make things (even using machines). It’s given me a completely different perspective on quotes I have had in the past for the odd cabinet, book case etc.
J

I'll bet there is metal in there.

Saw a documentary on Heals and designers once, I think I recall they take 70%. (edit, that was smaller ticket stuff, ceramics and lighting etc)
R

I don't dislike the design, and agree with Drbob about the Christmas decs test. But what I think makes the table look very odd is the photo - someone seems to have worked very hard to make it look as if it has just two legs on the floor rather than four. They've even got rid of the shadows of the legs that have been hidden/ removed from the view, which makes it appear very odd. Maybe seeing it in reality would be different.
D

Should have it's SWL very clearly legible on the top (homer)
To my eye, it's those leg joints that are all wrong.
Because, mechanically, they are wrong, it makes the table ugly,
to me.
But, as with many things, someone else may well love it.
I think it's just desperately trying to be clever, and it doesn't work.

This is a better picture, I think. 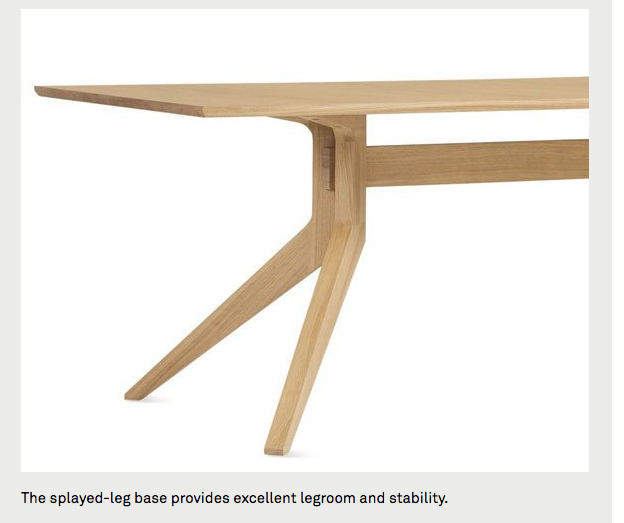 Interestingly looking at both the grain direction & the apparent line of the joints the back leg joint is vertical & horizontal in the front leg which would suggest to me the legs are of a laminated construction with a veneer on the top face to hide the laminations, a common enough construction technique these days which would result in a strong leg.

Price doesn’t really come into it for me, it’s worth what someone will pay for it & as I’d never be in the market it’s irrelevant though I’d probably want around that figure to make one as a one of.
S

I find it interesting that there are quite a number of negative comments concerning the legs and the seeming weakness in their cantilevered form. I suspect this form is deliberately chosen for both practical seating requirements, although I'm not quite convinced this requirements is fully satisfied, and also to present that visual strength question.

My first thought was that it reminded me of the similar structural question marks presented by pedestal tables that link to the floor via three or four legs emerging from near the bottom of the pedestal at something like 95 to maybe 110 degrees from the central vertical plane of the pedestal. Solutions were found for the leg to pedestal joint via everything from sliding dovetails to M&Ts to dowels, plus screwed on metal spoke affairs fixed to the underside - some of those structural arrangements work better than others.

The Hilton design in question here could involve an angled metal plate and epoxy resin where the plate is morticed into both the vertical wood part and into the top of the splayed foot element. That's just a first thought on my part, and I could be well off course and there's another solution using only wood.

Still, the complaint voiced by some about the potential weakness caused by this cantilevered design strikes me as a bit odd because, as I've illustrated, the pedestal table style falls into a similar category, and yet somehow thousands of this style have been produced over the centuries. Would anyone expect that style to survive gross abuse? I suspect not, and I've seen and repaired quite a few pedestal tables where the leg to pedestal interface had failed or was failing. It wouldn't really surprise me to find similar problems developing over time with the Hilton design. In both cases (table styles) the cause of any joint failure could be anything from flawed construction and/or technical choices, general wear and tear and all the way to gross abuse.

As to some of the pricing comments voiced here, I find it laughably remarkable and naive that any contributor, all woodworkers of one sort or another surely(?), would think paying only ~£2,000 for such a product was excessive, factory mass produced as this table surely is. I can easily see charging £5,000 and upwards for something similar if I was asked to make a one-off, but then that's the difference; one-offs generally cost a substantial amount more than mass produced stuff. I can see, for a one-off, and without doing any real pricing, something north of probably 80 - 100 hours work, plus materials so, to me, that ~£2,000 seems pretty good on the whole, ha, ha. Slainte.

Through the early '80s I made a few dozen tables with five inch wide double tenons into three inch square (at the top) legs. These were used in a commercial environment, and got moved (dragged) around daily. They occasional broke at the joints and got glued back, but lasted for about thirty years before a revamp of the premises.
That is a totally different kettle of fish to furniture like this - this is designed to be looked at, not used.
Horses for courses.
E

Sgian Dubh":1x5xkrhb said:
As to some of the pricing comments voiced here, I find it laughably remarkable and naive that any contributor, all woodworkers of one sort or another surely(?), would think paying only ~£2,000 for such a product was excessive, factory mass produced as this table surely is. I can easily see charging £5,000 and upwards for something similar if I was asked to make a one-off, but then that's the difference; one-offs generally cost a substantial amount more than mass produced stuff. I can see, for a one-off, and without doing any real pricing, something north of probably 80 - 100 hours work, plus materials so, to me, that ~£2,000 seems pretty good on the whole, ha, ha. Slainte.
Click to expand...

I agree with this in general but with the buying and manufacturing power that Heals has, I highly doubt it's costing them much at all to manufacture these tables. Also, their furniture isn't of a particularly high quality, at least not much of their furniture over the past couple of decades. You are paying for the name, in this instance. I was given a Heals chest of drawers by some friends who were getting rid of it, it retails for £800 and is oak veneered onto chipboard. I have nothing against any of these prices but the quality needs to at least be commensurate with the cost. I'm not saying the quality of this table is bad, just that I think we may be giving Heals too much credit.

As others have said, tables like this aren't meant to be abused or stood on or whatever else, but that doesn't mean that they won't be; dragging to make room for something else, kids standing or playing on them, general wear and tear. I'm also not saying these joints are bad, they could very well be laminated or plenty strong in other ways, but they certainly look like weak spots.

I would think for their size the joints would be weak no matter how they were made.

Much discussion about weak joints... of course they are, if you don’t want weak points put four verticals (one in each corner) nail sheet between each leg and a top that sits over that frame, see, perfect, no weak joints! It’s now a rubbish table though.

Design is all about compromise, that joint is plenty strong enough if it was combed together, even a butt joint with a large loose tenon would do (ever tried to take a trip trapp chair apart? They survive decades of being climbed on by kids).

I like it, but for me It goes skinny too early. The top needs to be slightly heavier, maybe running a rail under the top and thining the current rail a bit to form a structural box would help do that.

I noticed whilst leafing through my F&C issues that this table had been awarded a Guild Mark - so someone somewhere thinks it's nice.
J

The design isn't my cup of tea so it isn't something I can get excited about. It seems pricey in the same way that all store furniture seems expensive to me

, but then I don't price out my time for making furniture as I do it for fun, not to make a living. I look at something like that and think I could make something nicer (to me) for a third of the price and enjoy doing it.

I did note that the blurb calls the design contemporary, but to me it seems more reminiscent of a '70's design. I guess the reality is that there are only so many permutations on a table, and they've pretty much been done.
O

RogerS said:
Take off the (probably) 50% markup that Heal's make.
Click to expand...

I can't speak for Heal's margins, but I used to know someone who sold handmade bags through Harrods. They marked her price up by 300%. I also knew a maker who tried to get Heal's interested in selling his work. They were, but in spite of the seemingly astronomical prices they charge at retail, the sums didn't stack up. I don't think it's an outlet for the individual craftsman/woman.