What bits for a hand brace?

Got myself a rather nice Stanley hand brace.
The question is - what type of bits are best? I've tried some 'normal' drill bits from my electric drill and they're not very satisfactory. You-tube (especially Paul Sellers) suggests auger bits. What makes and where to buy them from? The auger bits I've seen show them in electric drills - are these suitable for my hand brace?
I'm looking for various sizes, from drilling the odd pilot holes (although I try not to use screws), to dowel holes to boring out mortice.
All suggestions welcome.
B 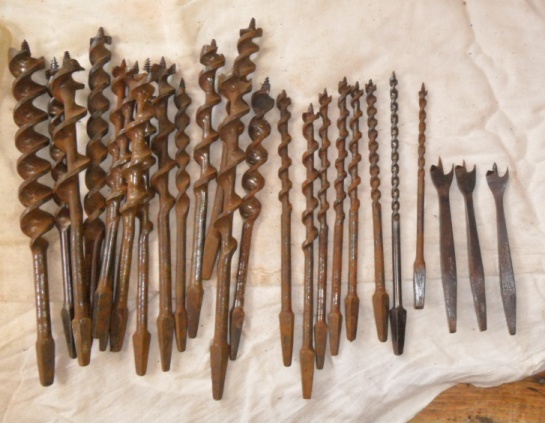 This is what will work with a Brace.
These are a bit rusty!, but even in this condition if sharp will work.
The 3 on the right are an older design, easier to sharpen, but a bit harder to use.
The pile on the left are known as "Irwin" or "Jenning" pattern bits. Available from 3/16 to 3inch dia.
New are still available, but expensive, used 2nd hand are plentiful, and can be cheap 20p-£2 car boot prices, little more at auction.

They're available second hand by the squillion. So long as the lead screw is OK, they'll be fine. It's a quick job to re-sharpen with a small file. I really can't see why anyone would buy new.

Because they cut quicker, cleaner and more accurately?

I have some new ones. NOS Irwin and Clico. Why ? Good intact spurs, mostly. But it is almost impossible to but new, square shanked ones since Clico went under. Ray Iles may still have some of their stock.

It is worth having a few of each size, I find, for chairmaking. They are fairly variable in actual finished hole size, so a choice of a bit undersize, about right and a bit over can be useful.

They are the perfect example of an old tool which works well, was produced by the million, is very common in poor condition, a bit rarer in good condition, but not made any more.
Like wooden bench planes, saws and files.

Buy yourself a lifetime's supply now while you still can, before the hand tool revival soaks up the easy supply.

With them being cheap and plentiful, I see no reason not to get a variety of different types and explore their various strengths and weaknesses. So get some

and any others you come across that I've forgotten!
C

Which bits to obtain depends very much on application (to state the obvious!). Chair-makers will have different priorities than joiners, and so on.

For general home workshop use on household jobs, furniture, box-making, toy-making and similar, a few twist augers (Jennings or Irwin are the most common patterns) are handy. The smaller sizes are more useful, with maybe two or three larger ones. If you can find some (especially the larger ones) with fine-pitch screws that'll be better when boring hardwoods, but most seem to be coarser pitch and are more suitable for softwood work.

Centre bits (right hand side in Bod's picture) are very handy for shallower holes, and can drill thinner stock without splitting it, unlike twist augers. A selection of sizes from very small to quite large is handy, but again, the smaller ones seem to get the most use.

Screwdriver bits are great for shifting larger screws when dissembling old stuff, and for quick insertion of screws. You will probably need to reshape the tips (file) to fit screw slots, since most seem to be either worn or have too steep a taper at the tip. Special ones with two prongs at the tip crop up quite a lot - they were for tightening the 'split nuts' on old-type saw handle bolts.

(Smaller holes, such as screw pilot holes and the like, are better done with modern lip-and-spur or jobber twist drills, but brace bits such as shell bits, nose bits, gimlet bits and the like turn up in mixed lots quite a bit, and whilst they can be fun to experiment with, are probably not as useful these days as twist augers and centre bits. Don't throw them out, though!)

Taper reamers (sometimes 'rimers') turn up, too. Also used back in the days when brassware and ironmongery had to be adjusted to fit the available screws, not so useful these days. The square ones were for iron, the solid half-round for brass, and the hollow half-round for opening holes in wood.
A

You can get new ones here:

I bought a couple and the quality is outstanding, the performance exactly what you would expect. There is one UK retailer who has/had the last stock of Clico bits which also perform as well as those I've linked to although the build quality is not quite as posh i.e. if you want good ones (which presumably are a bit cheaper), don't hesitate to get the Clico. Unfortunately I can't remember the name of the retailer. I'll post it if I do remember.
H

Of course then you get the adjustable bits as well where you can dial in the hole size. I bought one for my late Dad as a Christmas present years ago , now lying in my workshop. need to dig it out and try it again
N

definitely worth experimenting with a few - as mentioned above if the screw at the tip is badly damaged they do not pull into the wood.

Sharpening is easy - a few gentle strokes with a saw file on the cutting lips and then remove any bur underneath. Some of the bits have "spurs" that score the circumference of the hole to make a neat cut - these can be sharpened too, but only file on the inside edge (you may find examples that have been filed on the outside edge and this can spoil them, since it reduces the diameter of the circle that is scored).

Picking up on Andy Kev's point, the retailer selling the last new made in Sheffield bits is Toolnut. I think they are owned by Thomas Flinn - so it's no surprise that they carry Sheffield brand tools including Clifton and Henry Taylor.

An alternative for those who want to use auger bits but don't want to remove rust are the sets sold by Matthew at Workshop Heaven, old bits in as-new condition. Sets range from £95 to £265 according to quantity and type.
https://www.workshopheaven.com/tooling/ ... ugers.html

hodsdonr":iiyscevf said:
Of course then you get the adjustable bits as well where you can dial in the hole size. I bought one for my late Dad as a Christmas present years ago , now lying in my workshop. need to dig it out and try it again
Click to expand...

Don't worry. It still won't work any better.
A

Thank's Andy. Yes it was Toolnut but I couldn't for the life of me remember.

I did a comparison between new augurs from Clico and Fisch (they differed in size by 1/16" if I remember aright) and they each took the same number of turns to cleanly cut through some American poplar i.e. no discernible difference in use. The build quality of the Fisch ones though is in a class of its own.

I often agree with Phil, but for the sake of balance, may I point out Richard Maguire's words on expansive bits? If he used them when building his excellent benches they must be worth a try sometimes

I know I've used mine successfully, but I can't remember what on.

If you want Clico Jennings bits, Scotch eye augers, spoon bits, Ray Iles is who to talk to:

He bought up some of Clico's stock, and still has most sizes.

The Clico augers I have had can be good, but you might want to buy an auger file with them - the finishing isn't always perfect.
W

Some sound advice already given and I would add one further recommendation;if you see an Irwin expanding bit with both adjusting wings present do not let it escape. Infinite adjustability from 7/8 inch to 3 inch so you can even produce metric holes with it.

As you might be aware if you ever work on older stuff, screws can get very attached to their surroundings and a brace with a screwdriver bit allows you to lean on the screw head while applying a lot of torque.

To add to Cheshirechappies list of bits and their uses:

Gedge bits for some reason work better for end-grain boring that the rest.
Spoon bits make it possible - with practice - to bore a bole that is slightly wider at the bottom than the top. Potential fun combination with fox wedging.
E

Andy P Devon":3amcq6jp said:
...drilling the odd pilot holes (although I try not to use screws)...
Click to expand...

Cheshirechappie mentions which bits would be most suitable for this but something nobody has touched on is a brace isn't the right drill type for day-to-day pilot holes. Maybe if you're piloting for a coach screw or something of that sort of size but for screws in the normal range a hand drill (eggbeater) is the better choice, assuming you're not using a power drill.

If you have a grinder and you want to use twist bits it might be worth converting a small set of them for wood only. The standard grind angles on twist bits are intended for metal and while they will certainly drill wood they can work better if adapted specially, and you only need to do a handful of sizes for pilot and clearance holes.
X

ED65":2ps7oybe said:
If you have a grinder and you want to use twist bits it might be worth converting a small set of them for wood only. The standard grind angles on twist bits are intended for metal and while they will certainly drill wood they can work better if adapted specially, and you only need to do a handful of sizes for pilot and clearance holes.
Click to expand...

Hi ED65, from long memory I believe the point angle of 'standard' twist drills is 118 degrees. What is the best angle for wood?
Thanks in advance, xy
E

xy mosian":g9ikq69s said:
Hi ED65, from long memory I believe the point angle of 'standard' twist drills is 118 degrees. What is the best angle for wood?
Click to expand...

Something lower than this, i.e. a steeper bevel. The precise angle can't be that important given a 118° included angle works all right and I've seen recommendations for 60°, 75° and 90° for wood in various places. The main thing seems to be for the bit to have a more pronounced point. 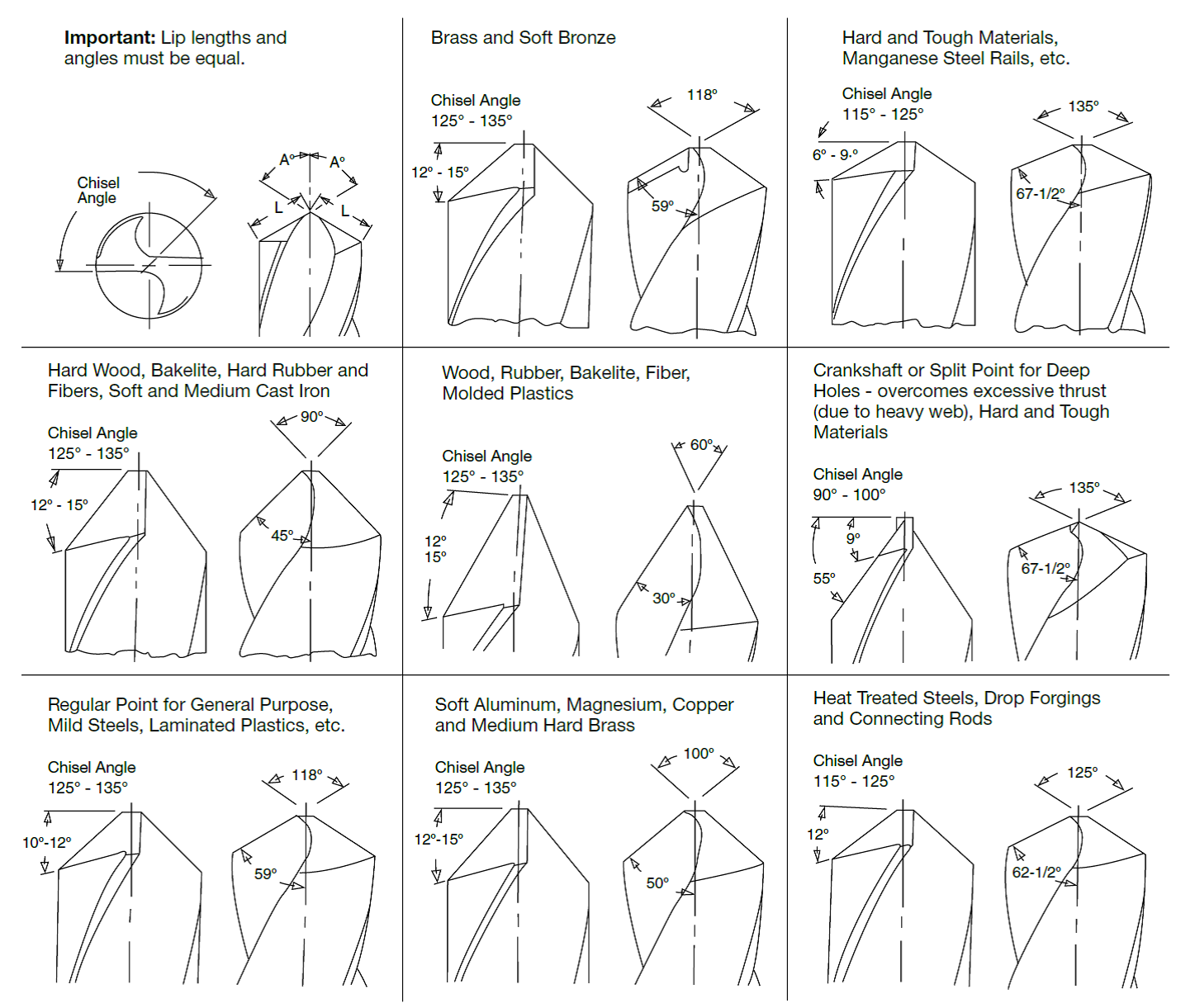 For anyone who wants to give this a try on a spare bit or two, there are numerous good guides to grinding bits on YouTube. The one that unlocked it for me was this one: https://www.youtube.com/watch?v=-wXBbbDVksk from That Lazy Machinist. Fair warning, the audio isn't the best on this because it was recorded in a large echoey machine shop, but it breaks the freehand method down into the simplest, easily remembered and repeated steps.

S
Tools: Fewer but more expensive, or more but cheaper?
2 3