Hi, i am hoping someone can help. We manufacture small items of furniture including footstools and have just bought in batches of 2 different furniture legs.
However we cannot find out or work out ourselves what wood the legs are! I believe they are oak and walnut but if so we cannot tell which leg is which.

If anyone can let us know from the pics it would be massively appreciated.

Thanks in advance (homer)

Agreed. Neither of the images are walnut or oak. They're both probably beech, as you suggest, with just a very slight possibility they might be either maple or birch, coloured up a bit to try and pass the wood off as the claimed species. Slainte.

My first thought was elm. They're certainly not oak or walnut.
T

No not walnut or oak. Not beech either... too corse. Annoyingly cant suggest anything else.
D

That would work":29mgszw4 said:
No not walnut or oak. Not beech either... too corse. Annoyingly cant suggest anything else.
Click to expand...

I think it is beech - but rather scrappily turned. I turned some dowels in beech and they were very similar.

What I think everyone agrees is that the two samples are the same wood, not two different woods, and that whatever that wood is it's not oak or (especially) not walnut!

Do the top (end) faces with the thread stud show good detail of the endgrain? might help in identifying wood.
Obviously copy/CNC turned with very little finishing other than staining judging by the tooling marks.

Birch/Beech?, seem a little too fast growing for Beech perhaps.

No guarantee that wood source is UK I suspect if they are mass produced.
S

The wood's texture is a giveaway in terms of trying to identify the species, something I'm generally not too keen to get involved in via low resolution and poor quality images posted in places such as this. However, in this case, there is one obvious characteristic that points identification away from either an oak or a walnut in that the images show a diffuse porous wood species, i.e., a fine grained wood, candidates for which might be beech, birch, maple, etc. All the oaks are a ring porous species, (as is elm, by the way) i.e., coarse textured, with a marked difference in texture between the grain of spring and summer grown wood. Walnuts are semi-ring porous species, i.e., medium textured, and again, that characteristic isn't at all evident in the images posted.

All of which leads back to these 'walnut' and 'oak' legs being faked up, as they've been done honourably (and perhaps sometimes not so honourably) for decades or centuries, by using a cheaper white coloured or pale substitute species and polishing the result up to vaguely represent the target species through colour alone. It was common in earlier times, and still is, for example, to pass off cheaper woods such as beech, maple, etc in the form of chairs, tables, and so on as a more desirable species, such as American mahogany, all through the art of the polisher. It didn't fool anyone in the know, but the makers weren't really trying to sell to those that could tell, and it's even probable many of the buyers were/are fully aware of the deception, but didn't/don't object, ha, ha. Slainte.

If you look closely at the first photo you can see the brown flecks in the grain that are indicative of Beech.

I think trevs onto something, looks like dyed beech to me as well.
S

Trevanion":3tr3v80m said:
If you look closely at the first photo you can see the brown flecks in the grain that are indicative of Beech.
It’s 100% Beech, nothing else.
Click to expand...

I think it is just worth mentioning that in terms of grain pattern and texture (not natural colour), various maples and European sycamore are rather similar to the different beeches and quite frequently display similar flecks, which are, of course, the medullary rays: they're not visually prominent in tangentially sawn boards, but can be subtly, and sometimes rather flamboyantly attractive in radially sawn pieces.

Naturally, as I've mentioned before, all these wood species (beech, maple, sycamore, birch sometimes) can be faked up to represent unrelated and more valuable wood types, and the colouring up job can make it harder to recognise one from another in a photograph. But I agree with you that beech is the most likely wood species in these legs. Slainte.
J

I'm not sold on beach.....is it possibly poor man's walnut?......tulip wood.....what ever species it is, it looks like its a blondish wood with a walnut stain.

I'm about to burst a blood vessel here :lol: 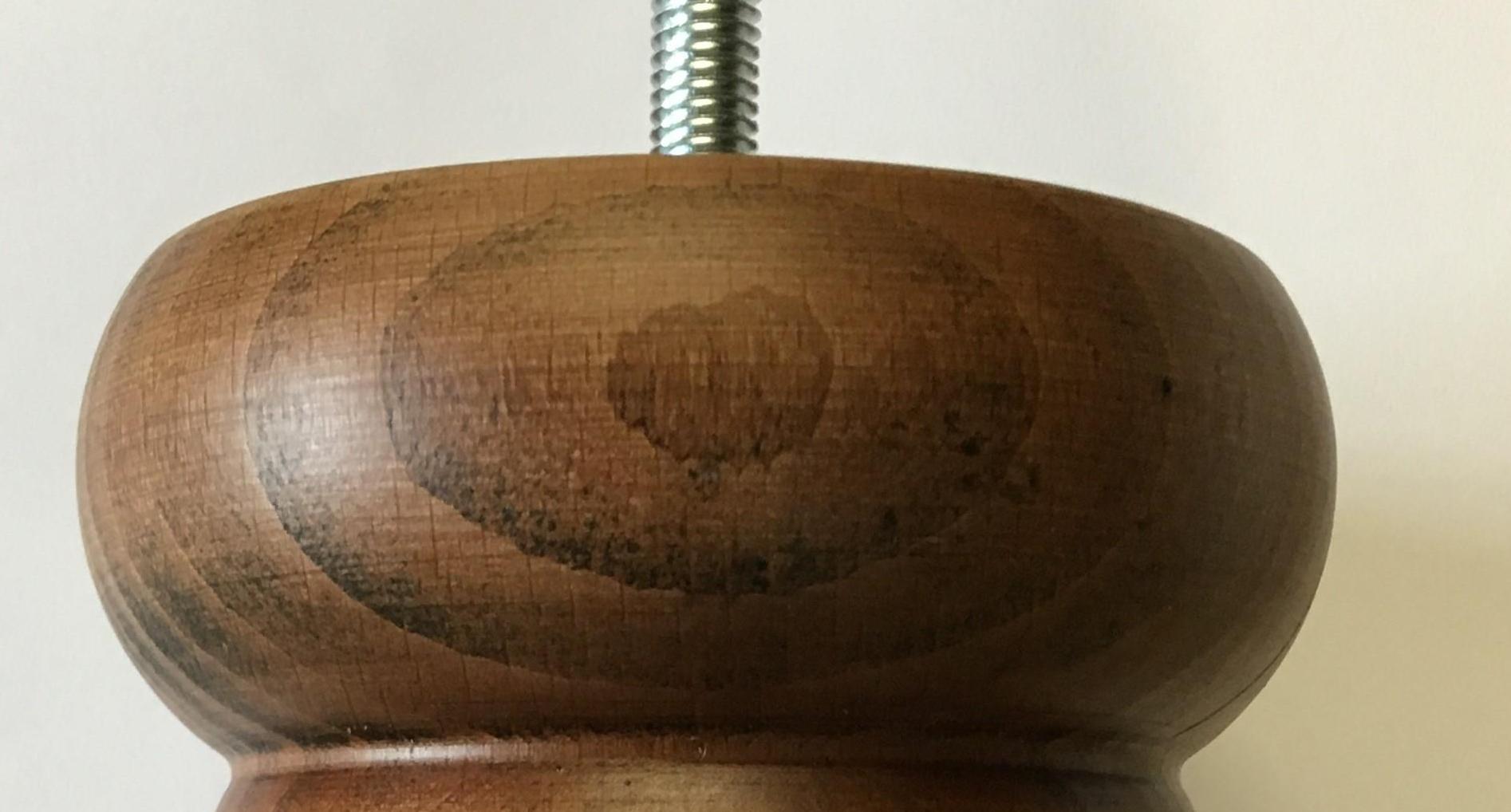 BEECH! I would bet copious amounts of money on it.

Don't get angst about it, Trev. You can't prove it from a photo, and it doesn't matter.
S

Nor could Mac buy the beach from Knox in Local Hero, ha, ha.

Butternut (Juglans cinerea) is more commonly thought of as poor man's walnut, especially in North America. I really don't think tulipwood, aka poplar (Liriodendron tulipifera) is a likely candidate based on the samples photographed in the first post.

And we don't want Trevanion to burst any blood vessels, do we? I suspect his 'certain' beech identification is probably correct, but unlike him, I'd never be quite so adamant in my certainty; but that's because it's really quite difficult or impossible to positively identify a wood species from low resolution images posted on the internet. I usually ignore requests online to identify wood samples because of that, but for some inexplicable reason this request piqued my interest, so I joined in the guessing game for a bit of entertainment. Slainte.
J

Trevanion...just turned on my wife's Mac and looked at the image......Yep I see what was making your blood vessels burst.....I does look like beech!
note to self...don't try and identify timbers from image on a cell phone!!

26 Dec 2021
DavidConnelly
D
A
Workshop space to rent out in east sussex.