So, the machine is now in the back of my van. Luckily, access was good and stripping off ancillaries easy (nothing too heavy, stuck or otherwise problematic). It will be Wednesday before I can offload it and take a closer look. However, a few observations for those who are on tenterhooks…

There’s no specific model marked on the machine. I managed to find a brochure, which though not dated, does suggest a certain era; early 80’s rather than 90’s. It was suggested that it may be a transitional model from the early 80’s, which may explain the lack of specific markings.

Although the body of the saw is clearly less substantial than the cast iron forebears, the the table and trunnion appears (at a glance) every bit as substantial.

Eyeing up the blade that is fitted and the available space, I would say that it will take a 12” blade, making it an AGS 250-300. However, I may find that whilst the 12” will fit, it won’t drop below the table, making it an AGS 250. The dimensions are of the table and cabinet are the same on both saws, so there’s very little to distinguish the two models!

Other than that, it runs smoothly and is in very good condition for a saw as old as me!

That serial number certainly seems to indicate a 1979 or 1980 model (Wadkin machine and test numbers don't seem to state the actual year for some arcane reason). I also note that the model number is 525 (?), not AGS. I'll bet when you put a 12in blade on it it won't retract more than 2in above the table, and with a 10in blade it'll be 1in. I suppose as they were meant to replace two models it's why the brochures call them an AGS250/300. The old style MEM switch box is another give away - later models have a swishwr integrated switch gear front plate

It looks fairly complete. Did you manage to get the flip stops for the fence?
L

The flip stops are the only item missing. However, the previous owner and his friend are going to hunt them out.

Other than that, it seems complete, down to the magnifier on the fence! It can with 5 different blades too.

I notice that the brochure depicts the AGS 250 without sliding carriage, the 250-300 with; perhaps that’s actually the only difference.
S

JobandKnock said:
I seem to recall that member @Sgian Dubh wrote an article about his in FWW many years back
Click to expand...

Actually, the article you refer to was published in Woodshop News in the US which was more akin to a monthly newspaper than a glossy magazine because it was printed on newsprint. It also got an airing in F&C, but it must have been twenty plus years ago. I haven't written an article for a woodworking journal for probably eighteen years now, mainly because the financial reward was puny, and I got quite fed up with text sometimes becoming mangled at the editorial stage, e.g., sentences and even whole paragraphs somehow getting moved about so the text no longer made sense.

The main thrust of the article was the creation of an outfeed table with extended drawleafs to catch the ripped parts from both sides of the blade during ripping operations where the rip fence came into play. The point was that the part of the offcut table well placed to catch the offcut from the ripping operation would prevent full travel of the sliding table when that was required. So a means to get that part of the table out of the way for sliding table operations; my solution was to make a table with drawleafs that could be slipped out of the way under the main part of the offcut table top. Slainte. 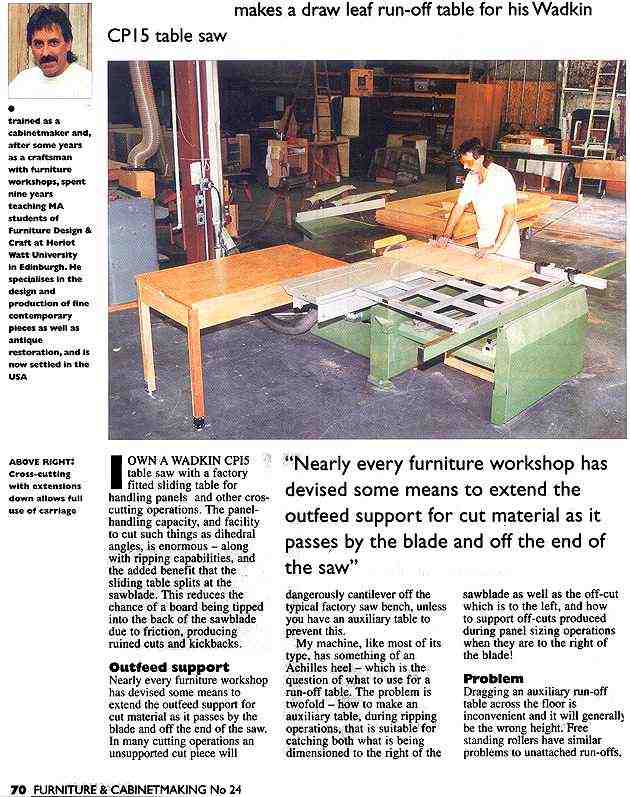 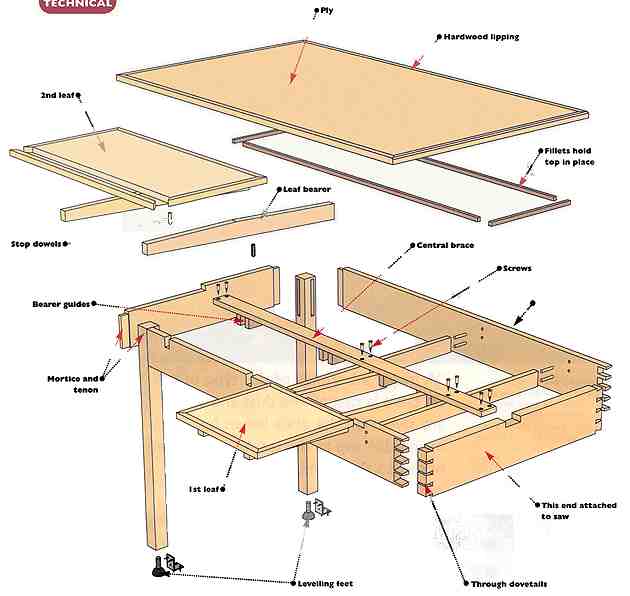 Sorry for misquoting, there. I did have the article at one time but TBH I haven't seen it for yonks. I used to get various trade type papers at the time - all now gone for recycling. Even got the saw wrong - you had the CP not the SP, but the arrangement to the left of the blade was pretty much the same on both saws. The need for a decent size run off table if handling sheets or long materials of any length hasn't changed, though.

Is my memory playing tricks or did you also co-publish some stuff back then with someone called Barb Sidiqi or something similar about that time?
S

JobandKnock said:
Is my memory playing tricks or did you also co-publish some stuff back then with someone called Barb Sidiqi or something similar about that time?
Click to expand...

Yes. Ripping long boards on the Table Saw. It was published at the WoodCentral forum. No pay at all for my contribution there, and done simply as a favour for the author, Barb and for Ellis Walentine, who owns the forum. Slainte.
Last edited: 7 Sep 2021

THE MOST EXPENSIVE MULTICO TH... IN THE WORLD. (RESTORATION)
2