Torx said:
Wait, your garage returns the left over oil?
Click to expand...

Is that a surprise? Ours do that, usually a hundred or so ml & if you really want they will return the used oil.
P

TheUnicorn said:
do you have a lid or cover of some description to stop sawdust and other desirables getting stuck in the rag?
Click to expand...

I have a rag in a can and I use 3 in 1. I store mine upside down in another can the next size up. 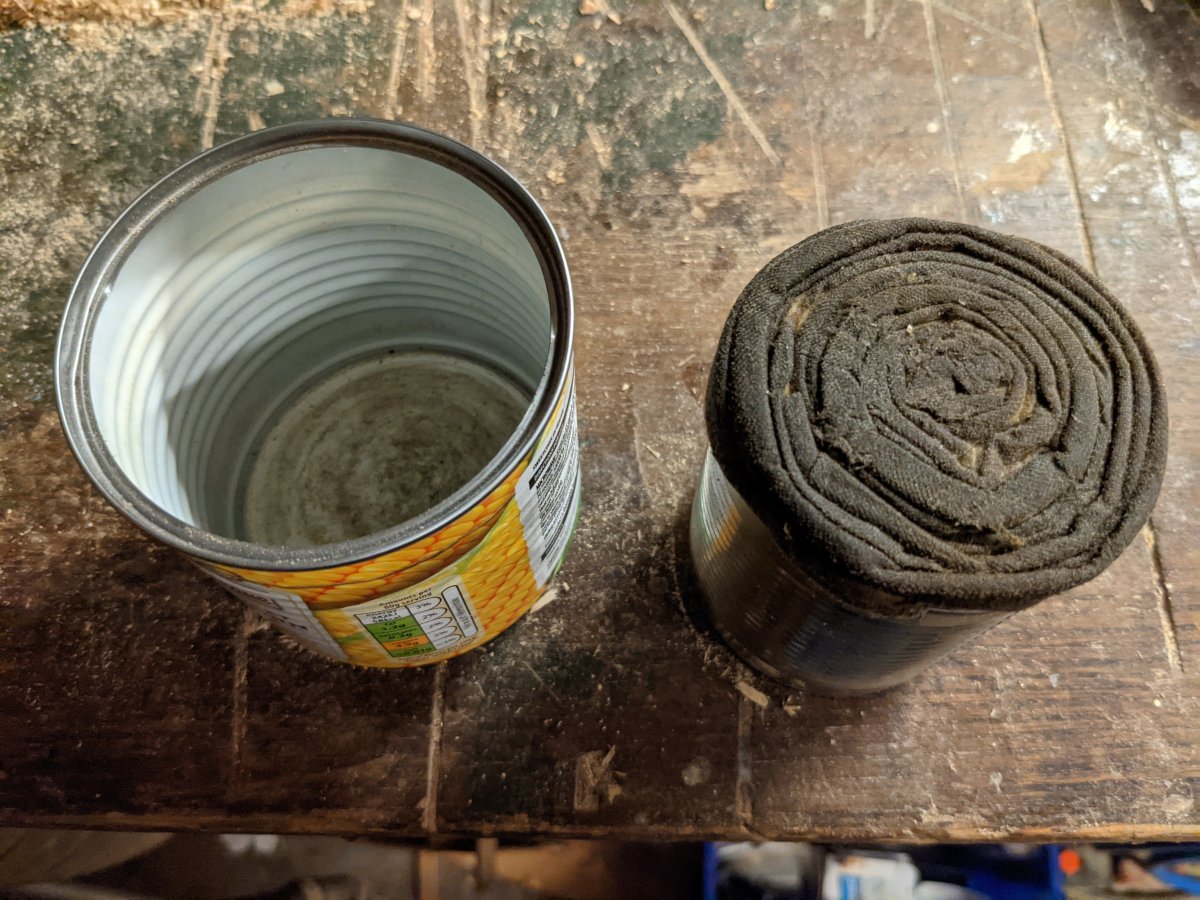 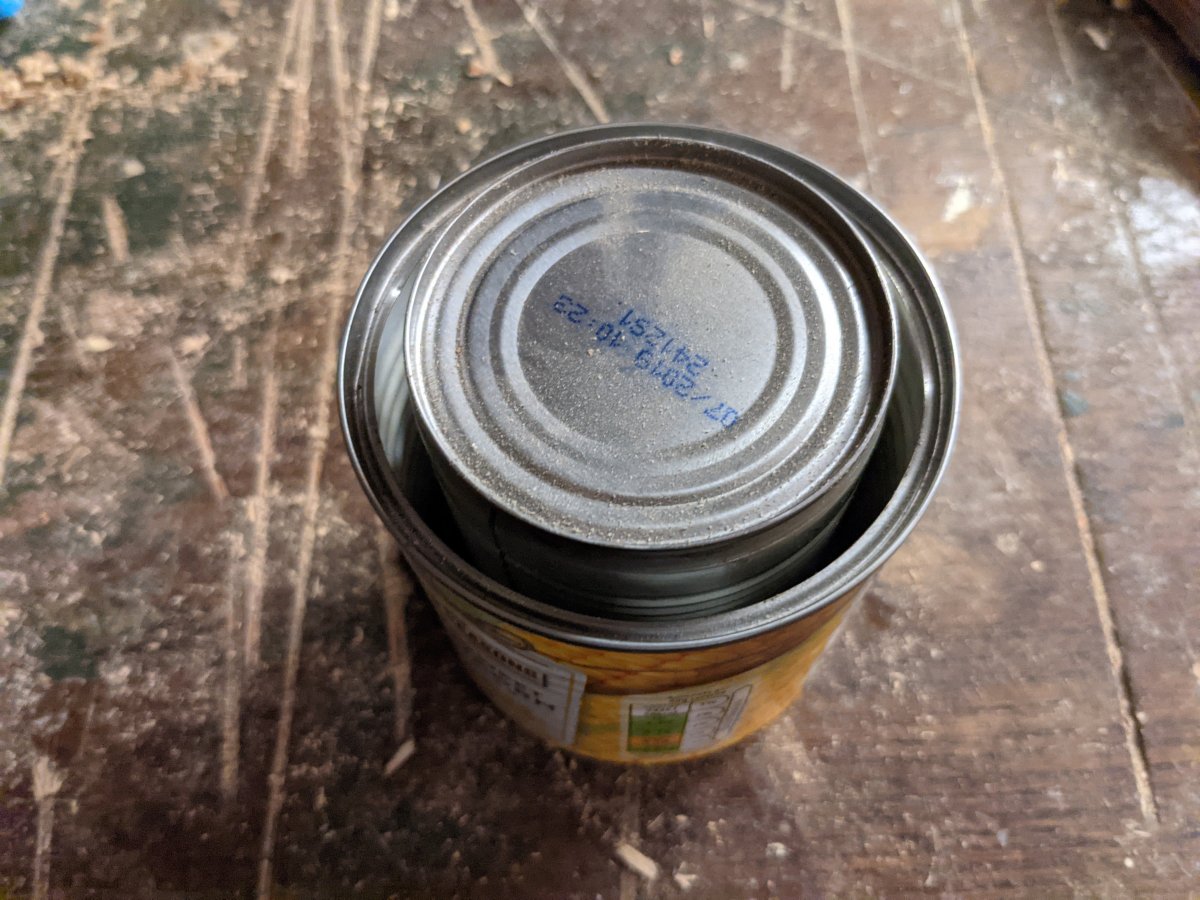 After retiring my rag-in-a-can a couple of years back I replaced it with a leather strap. The bottom of the can still has the original first layer of cotton tee shirt in place then I coiled the strap (around 40mm wide if I remember right) and forced it in. Topped up with clean engine oil and good to go. I much prefer this as the cotton would occasionally catch and fray. This is the can as of today and used frequently for around two years. 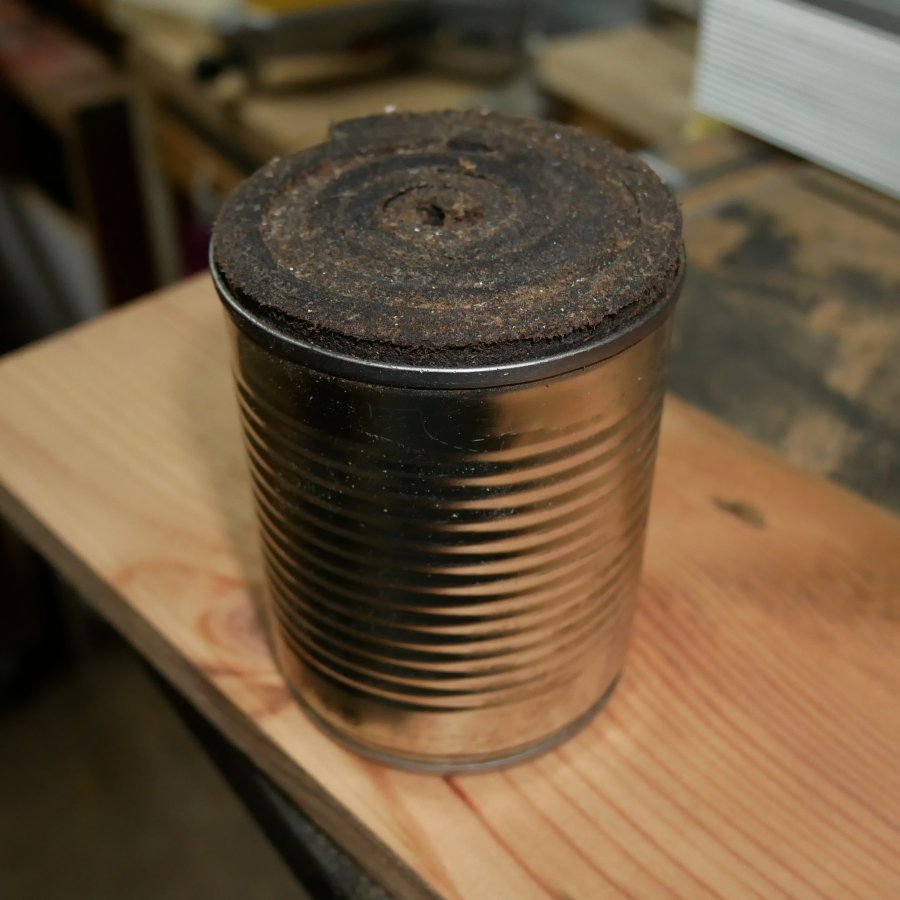 What a brilliant idea this rag in the can is...I spent my working life in the aerospace industry and we used WD40 as a feeing agent , especially on old engine parts.
T

powertools said:
I have a rag in a can and I use 3 in 1. I store mine upside down in another can the next size up.
Click to expand...

like that idea, pity I just threw out a can with a rubberised lid that would have held a smaller can perfectly
F

Phil Pascoe said:
WD ... Water Displacement. It's not designed to be a lubricant. Incidentally, I have read that it is not advisable to use it for that purpose on vehicle electrics as it can cause intermittent faults, which are a nightmare to find.
Click to expand...

It can also cause problems in intricate things like locks. Excellent for freeing them up but you should then introduce some regular oil. Otherwise when the solvents all evaporate over a few weeks it will gum it up again.
T

Fergie 307 said:
It can also cause problems in intricate things like locks. Excellent for freeing them up but you should then introduce some regular oil. Otherwise when the solvents all evaporate over a few weeks it will gum it up again.
Click to expand...

Had picked up the idea that locks should be lubricated with graphite powder, but never in combination with wd40 or oil as you then get a graphite gunk. This is theoretical to me, I've never had any graphite powder, also I'd be reluctant to add any to a lock that had previously been oiled or loosened with WD40, I'm sure after a certain amount of time the lock is dry enough that graphite would be safe, but I have no basis for gauging that.
M

SMALMALEKI said:
I get my own oil instead of bulk oil from a 200 litre barrel. I get the remaining just in case I need to top it up. I have few galleons in garage.
you can have one.
Click to expand...

My you must have a very large garage to house a few galleons within it. I'd love to have one but I live too far from the sea to be able to sail it.
(Sorry @SMALMALEKI I can be just too pedantic sometimes but it made me smile)
I

The japanese tool arival brought camelia oil, traditonally used on cloth in a pot, made from a bit of 50mm dia bamboo cut with a node for the base. What we get sold is expensive and contains a fair bit of mineral oil (baby oil). For some time I've used rapeseed oil available cheap from any supermarket. It's also used as a specialist lubricant (presumably with additives). This works quite well and does not cause subsequent finishing problems you might get with engine oil; but engine oil would be OK for garden tools. Camelia oil is also sold as tea tree oil by the alternative cosmetic enthusiast suppliers (Amazon). It's much cheaper than toolshop camelia, and you could cut it with mineral oil if you want. It would be interesting to know if Camelia oil carries any natural anti rust compounds, or if it became popular in Japan just because it was available for Samurai swordsmen.
Rusting requires both oxygen and moisture, oil keeps out the oxygen, but is often lifted by water (oil floats). Maybe camelia oil also has some dewatering ability (presumably not easy to find, as WD took 40 trys before it became WD40!)

I heard that WD-40 is made from fish oil. No idea whether it is true or not. It doesn't smell fishy.

I just topped up my rag in a can with some of engine oil to test it out. I have to say I didn’t like the way it started to sink into the rag. I have at some point bought some camellia oil which I am going to use. There is going to be mixture of 3 in 1 + engender oil and camellia oil on my rag for time being.
Last edited: 27 Jan 2021

It saturates the rag - it's meant to.

WD40 great for spraying fishing lures and baits!.....they even advertise it as a fish attractor.

OldWood said:
It may be urban myth, but I undertand that WD40 was developed to protect the Minuteman missiles in their underground silos from humidity. It was the 40th product tried and consists mainly of fish oils.

I am now expecting someone to come along and say that is a load of b******ks.
Click to expand...

Hey, that's what I was told as well!

I use sewing machine oil, for my oil stones and to protect tools. It is formulated not to gum up and attract fluff in sewing machines. Ask any sewing machine repair man and they will tell you, WD-40 and 3-in-1 are the worst oils for repairs. WD cleans more than lubricates and 3-in-1 gums up over time. I also have no reaction to sewing oil on my skin and if you get any on wood it is clear and very fine. Cheap for a litre as well.

Tanglefoot20 said:
What a brilliant idea this rag in the can is...I spent my working life in the aerospace industry and we used WD40 as a feeing agent , especially on old engine parts.
Click to expand...

A study done by Machinist's Workshop magazine in their April 2007 issue looked at different penetrating oils to see which one did the best job of removing a rusted bolt by measuring the pounds of torque required to loosen the bolt once treated. If the study was scientifically accurate, it turns out a home brew works best!
Here's the summary of the test results:

They say that there is no such thing as a stupid question but...... here goes - what is ATF- Acetone? And in what Proportions should it be mixed?

MorrisWoodman12 said:
They say that there is no such thing as a stupid question but...... here goes - what is ATF- Acetone? And in what Proportions should it be mixed?
Click to expand...