I have been using my Union Graduate with what appears to be the original 3/4HP Newman 3 phase motor, running it through a VFD. I found on larger diameter work although the VFD can reduce the spindle speed to 100RPM, the spindle can be stopped too easily, as it does not have any reasonable torque.

I recently started using a bowl saver, and found this to be a particularly slow process with the motor coming to a complete stop unless I was very careful.

So I decided to upgrade the motor to a more powerful one, and came across this motor on ebay. 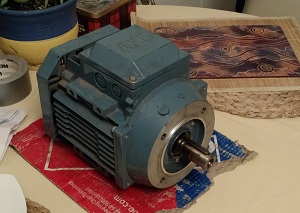 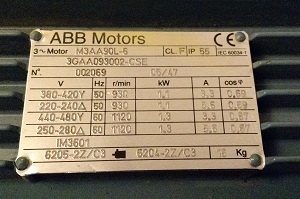 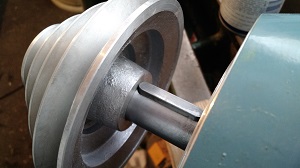 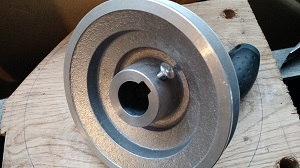 The new stepped pulley did not have a keyway, and I did not think that one small grub screw would hold it securely enough. So I carefully hacksawed and filed away part of a keyway, but could not reach easily into the centre of the pulley. I opted to trim the key supplied with the motor until it all fit together. Hopefully with a belt drive there will not be too much shock applied to the key/keyway. I then tapped and drilled another securing screw, with a plain hole drilled in bottom of the outer pulley to give access for the drill, thread tap and screwdriver. I also tightened the provided grub screw aswell, which went down into the void left by the missing part of the key. dab of loctite on both threads to keep it from shaking loose. 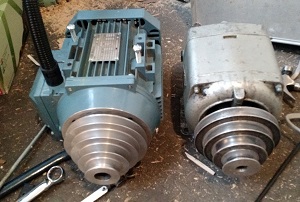 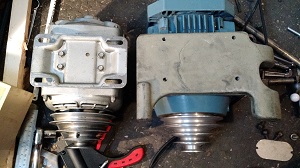 The motor did not have mounting legs, and is actually designed to be mounted on a flange at the front. This proved not to be a problem though, as it had several M8 threads already tapped into the body that I used. Both sides of the bolts have cork mounting material to hopefully absorb sound and vibration. 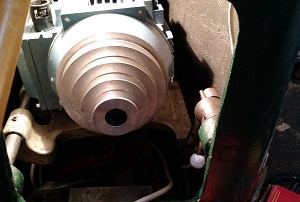 Not much looks different now its all installed. I had to adjust the pulley tensioner, as I think the centre of the motor spindle is now slightly higher than the old motor arrangement. I am slightly concerned about motor cooling, as there is only 15mm or so between the fan intake and the side of the lathe casting, so it probably cannot draw air as easily. I will have to monitor how hot the motor gets during use.

I have found the motor can run fine at 120Hz, although it will have alot less torque at this speed. This means in theory on the highest ratio pulley setting I can have a spindle speed of up to maybe 3000RPM, hopefully it has enough torque for a buffing wheel at this speed.

Depending on how hot the motor and VFD heatsink get, I will decide whether a cooling fan is needed to circulate air within the lathe body.

I then sold the old motor complete with the old pulley and bolts to attach it to the motor plate, helped to reduce the cost of the conversion a little bit. Now I need to get my rev counter working again to see how slow it will go!

Are you using the old VFD or a new one? If the old is it rated to handle the bigger motor?

We have one of the Beall 3 wheel buffing setups for the lathe. It has 8" wheels and the instructions say not to exceed 1800 rpm. 3000 rpm sound very high but I admit to having limited buffing knowledge.
M

The VFD is the same one, it is rated at 1.1Kw, so is now at its maximum capacity. Ideally it would be rated slightly higher than the motor but it seems to work ok and not get too hot.

I have used a 6" buffing wheel on a big grinder which was a 2 pole motor, so probably around 3000RPM no load speed. I believe buffing wheels usually come with a maximum recommended speed. I personally find buffing metal works better at higher RPM, but I have not tried any wooden items on a buffing wheel before.

For polishing wooden bowls, have you tried a buffing wheel before?

We bought it for pens. Buffing CA and the various plastics and resins including Ebonite. Most of the time I polish at 1200ish rpm as the wheel behaves like it is softer. The faster it spins the more force spinning it outward will make it harder. it works for us but I have limited experience buffing. The Caswell site has information on wheels and compunds for most buffing but not wood (oil and wax finishes) itself in a free PDF. https://www.caswellplating.com/buffman.htm
B

Was the cooling an issue in the end, or was everything OK? I ask because I am considering the same upgrade.
M

During woodturning I never had an issue, as you tend to strain the motor intermittently, it was when holding something against a buffing wheel that seemed to strain it enough to trigger the inverter thermal cutout.

The motor fan is quite close to the inside of the case, I was initially worried about cooling, but the motor never gets more than lukewarm even after several hours of intermittent running, even at lower than its 900rpm design speed, as I tend to do larger bowls.

Thanks for the additional info, very helpful.
M

Another option - I just mounted my vfd on the lamp bracket in place of the lamp. Lighting in my workshop is very good
B

One more question, where did you get the new stepped pulley and what was the specification of each of the pulleys?
Many thanks
M

I bought a new stepped pulley on ebay, but you have to make sure it is one with an extended shank on the inside, this is the one I bought:

Most stepped pulleys for sale are designed to be mounted with the smallest pulley closest to the motor, so they do not have the extended centre. I did not research the various diameters in alot of detail, most likely they are slightly different diameters from the original stepped pulley. The stepped pulley on the lathe spindle can be kept. The speeds listed inside the lid are meaningless now anyway with a different motor and VFD speed control.

You may find once you have the new motor, you can bore out the old stepped pulley and use that one, depending on the motor shaft diameter. For my new motor, I found that the diameter of the motor shaft was larger than the inside of the smallest pulley groove, so could not be reused. Interestingly the one I purchased had a slightly shallower V groove on the smallest pulley to compensate for this.

Unfortunately most sellers do not show the back of the pulley, I had to ask them to confirm first. For bonus points, I sold the old motor with existing pulley on ebay to cover some of the cost of the conversion!

For reference this is the type you need to AVOID:

and this is the back of the correct type, from the ebay auction above:

Thanks for the very detailed response. Very helpful.
B

Does anyone know what the cage size of the original 3 phase motor is? I have seen a 'compact' 1.1KW motor which has a size 80 cage and given the ABB motor pictured above is a size 90 cage, I am hoping this compact motor is nearer the size of the original motor. Also are the original holes in the mounting plate compatible with any particular modern motor foot layout?
Thanks.

Bigbig blue,
I cant find it now but there is def a data sheet giving the size of motor footprints and bolt hole dimensions.....
B

I have been doing a little reading up on vfd and as far as I can tell, if you use a 'vector' inverter, the torque at low revs is much higher than a 'non vector' type inverter. I am considering whether for my use, I would be better off replacing my non vector 1.5kw inverter/vfd with a vector type than replacing the oem 3/4 hp motor with a 1.5hp one.
Any thoughts / advice / comments very welcome.
M

Mine is not the vector type, its the plain (and often cheaper to get hold of) vfd type. It is a Yaskawa j1000 series. I believe some of the vector units need a rotary sensor on the motor to detect changes in rpm, so watch out for that as it would make your install more complicated, especially if you pickup a secondhand unit with the sensor.

I do believe the vector types have higher torque at low rpm as you say. However you already have the pulleys to gear things down a little (and therefore increase the motor speed) which makes very slow running less important. With mine at around 100rpm spindle speed (200 - 250rpm motor speed?) there is noticeably less torque, although I tend to be roughing out when using that speed, and prefer it to stop rather than plough ahead and break things. If you are planning to do large diameter work, say over 50cm, I think the vector type would be worth the extra cost.

You could always do a temporary test of the vfd you have without installing it.
B

I decided to treat myself to a clearance stock Schneider ATV12HU22M2 sensorless vector 2.2KW inverter, which should arrive tomorrow. I have no idea how the sensorless control works or how it compares with a drive with a sensor, although I presume sensorless will be at least slightly inferior. I will compare it with my non vector drive with the original motor and see how they compare.
M

Interesting! I believe the sensorless ones measure the way the motor behaves electrically, eg voltage and current. I think the other advantage of the sensor ones is precise RPM/position accuracy, which is not really needed in this application. Good luck and start reading through the setup guide, they can be a bit involved!
B

The 3/4 HP motor originally fitted to my lathe has a D80 frame. I managed to find a 1.5HP D80 frame motor (4 pole), with which I will replace it.This motor has the advantage that the pulley on the current motor should fit perfectly. The vector control vfd does give a very noticeable increase in low speed torque over the non vector vfd.