Now I know that othe people's holiday snaps are the most boring things in the world.
So Tough.

But I'll try to make it Woody Relevant

I've recently been to Maine and met up with my friend Dave of FWW Design Click Build fame.

He picked me up from the airport in Portland, Maine and we did Lots Of Nice Things.

Woody highlights included a visit to the LN place. We caught a glimpse of the back of the great man's head, but he'd gone before I could get my phone out. 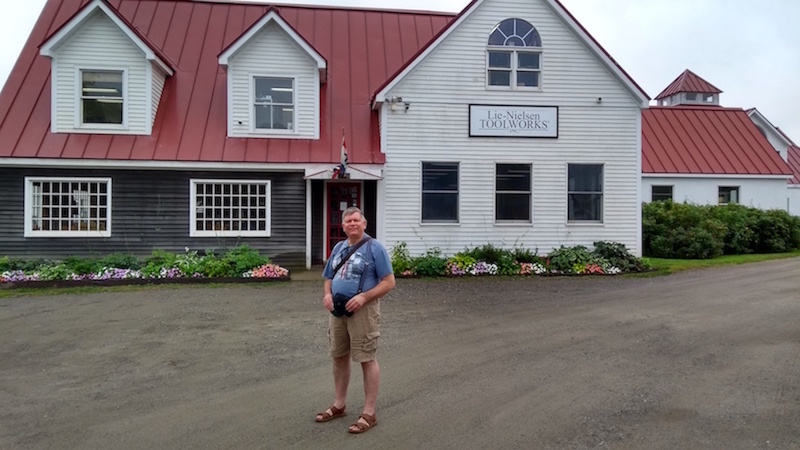 We were just in time for a guided tour, as it was lunchtime for the staff. There is an interesting mix of State of the Art CNC stuff and traditional manual machinery. 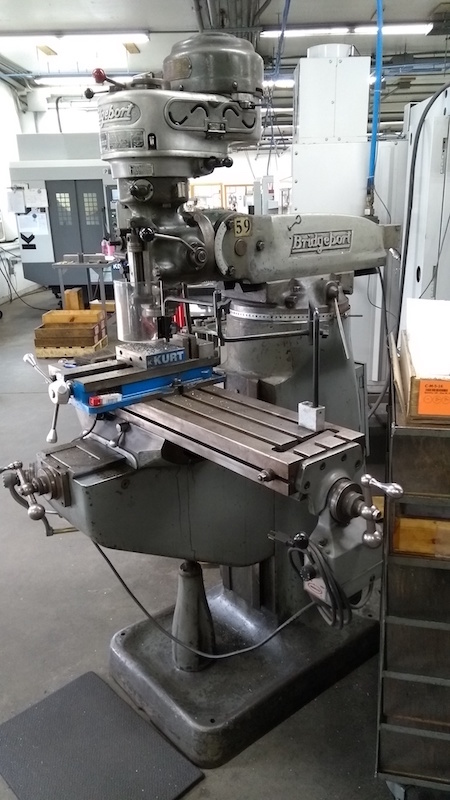 We were not allowed to touch anything. Well, you don't want Maskery paw prints on your nice new Lie Neilsen block, do you? 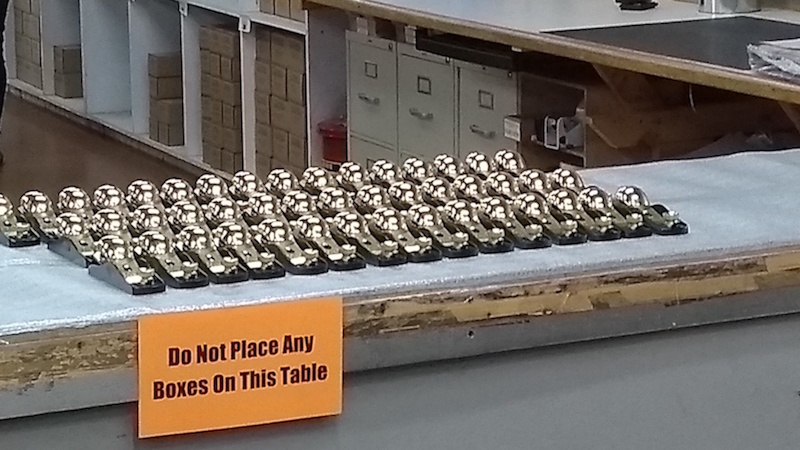 These numbers represent the degree of flatness after the primary grind. They will be fettled later. 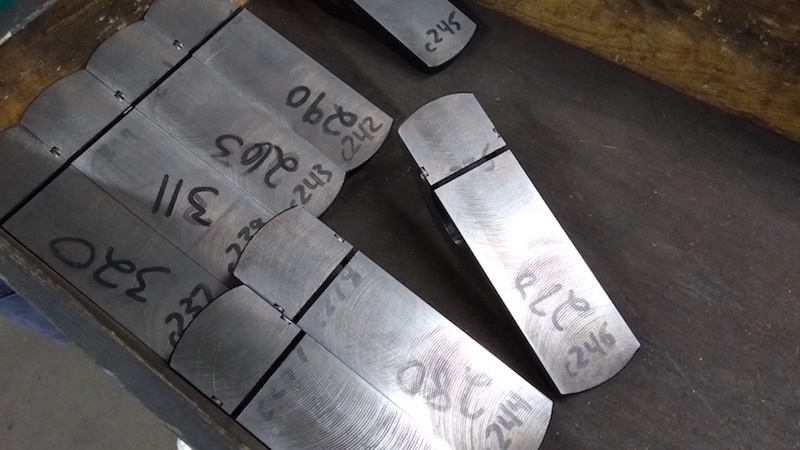 I bought a couple of holdfasts. Flippin' expensive with the exchange rate as it is, but still cheaper than buying them in the UK.

We also went to a maritime museum. Very interesting, even to a landlubber like me, and some serious old machinery. 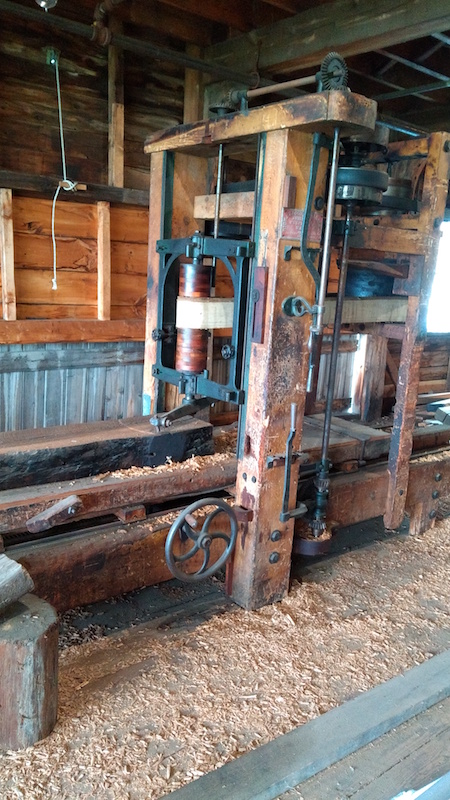 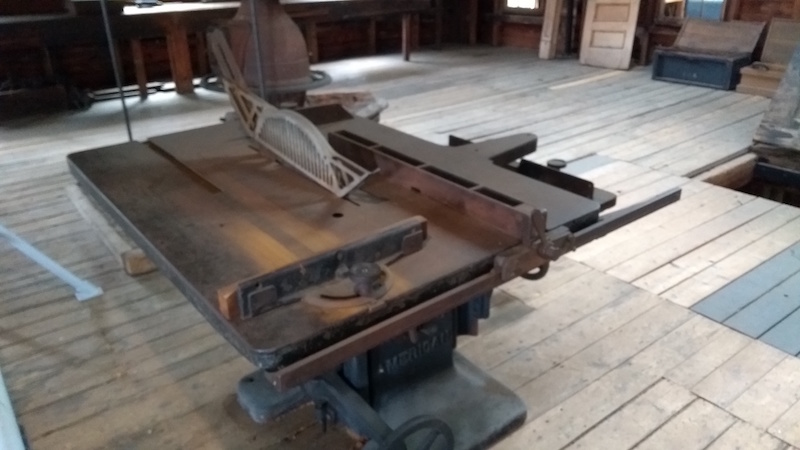 That would be a seriously good bit of kit if it were cleaned up.

LN wasn't the only woody fix.

We visited the Centre for Excellence in Furniture and Craftsmanship. Wow, what a place! idyllic setting huge workshops, extensive library.

We met Tim Rousseau, who kindly gave us free rein to walk around the site and talk to the students. I really wish it were not so far away. 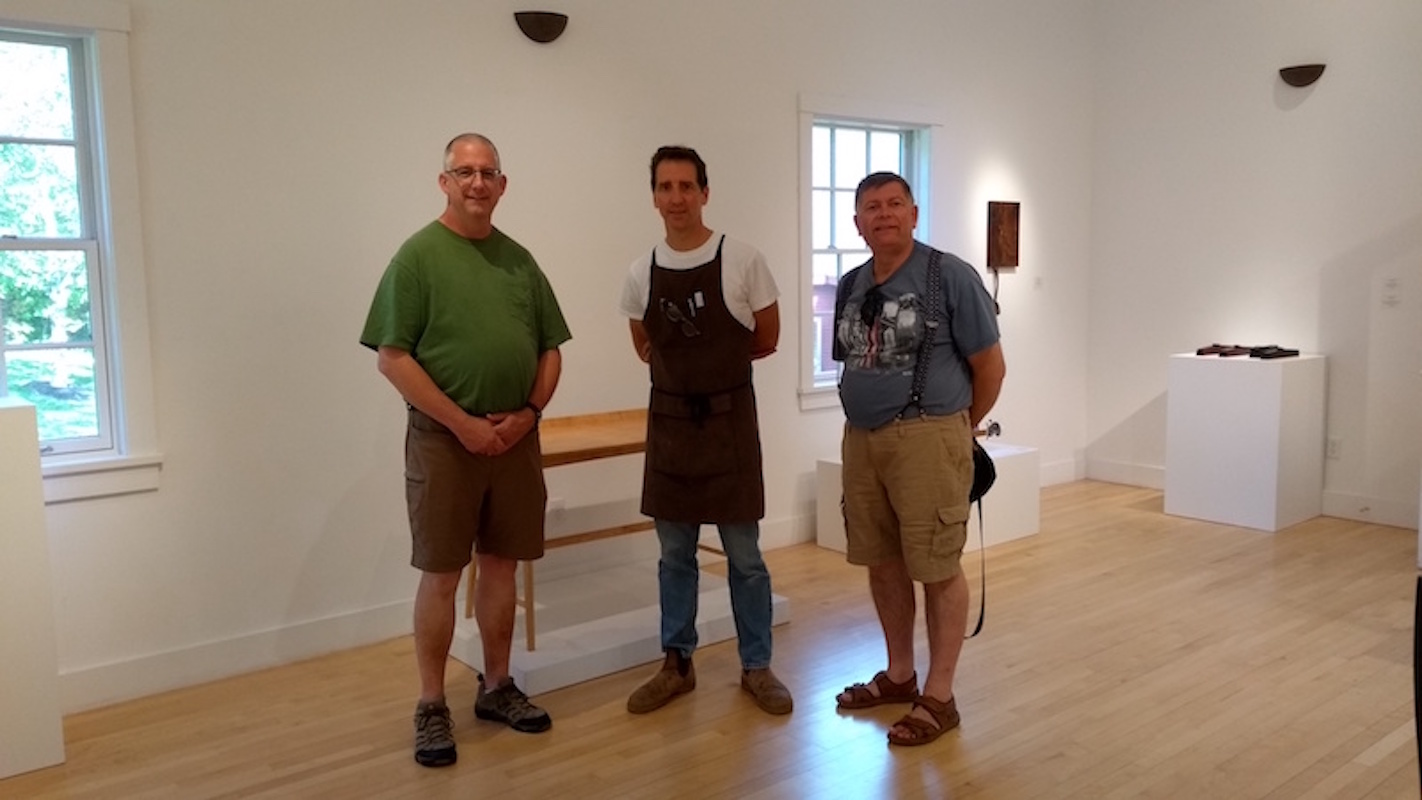 Nearby was a Windsor Chair maker. Shaker stuff too. 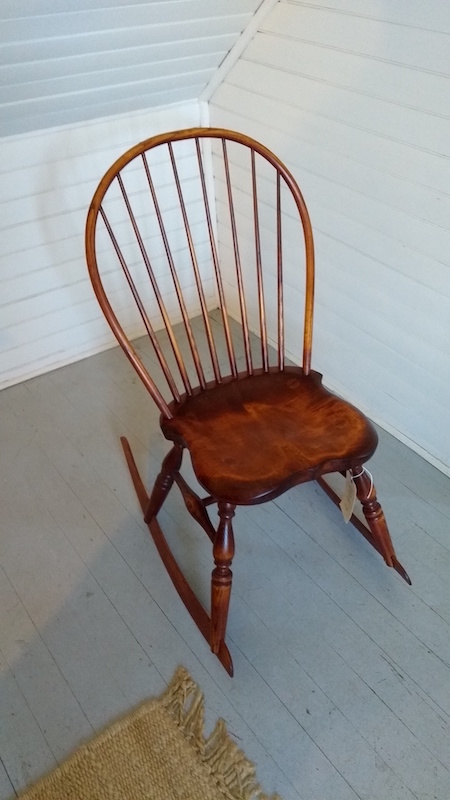 It's a brave and confident chairmaker who has a competitor's chair in his showroom and invites you to compare and contrast. This is a Thomas Moser chair - Did you take cheese?
I accidentally carried a banana into America in my hand luggage, discovered by a pesky spanial. I thought I was going to get the rubber glove treatment.

It wasn't all wood.

There were beautiful houses, these were typical rather than the exception: 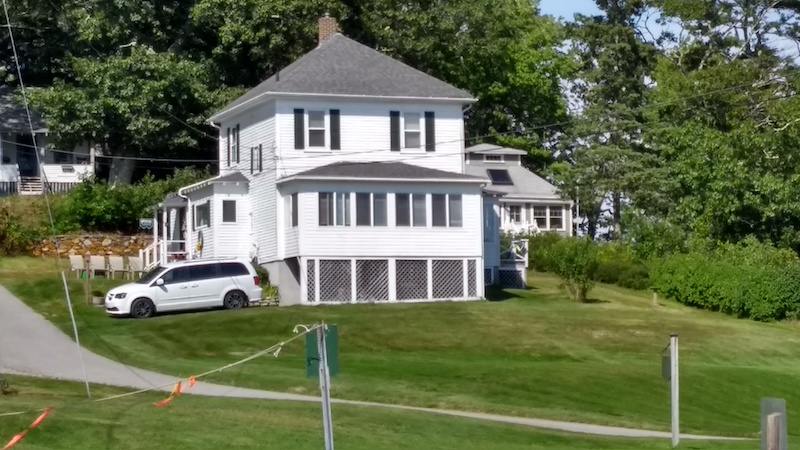 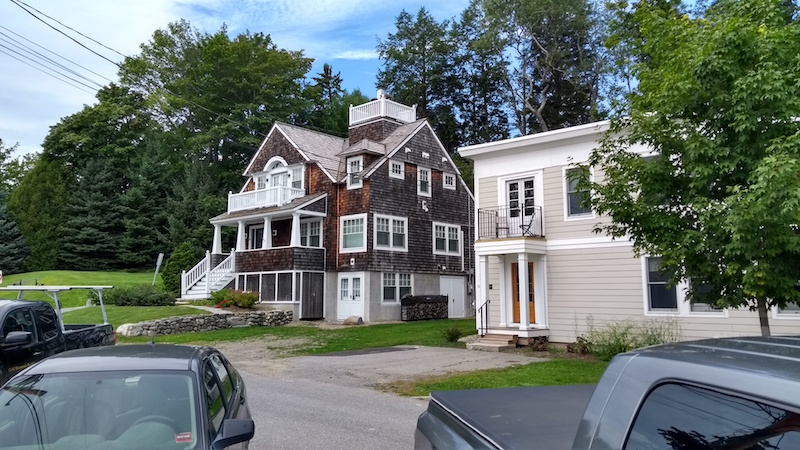 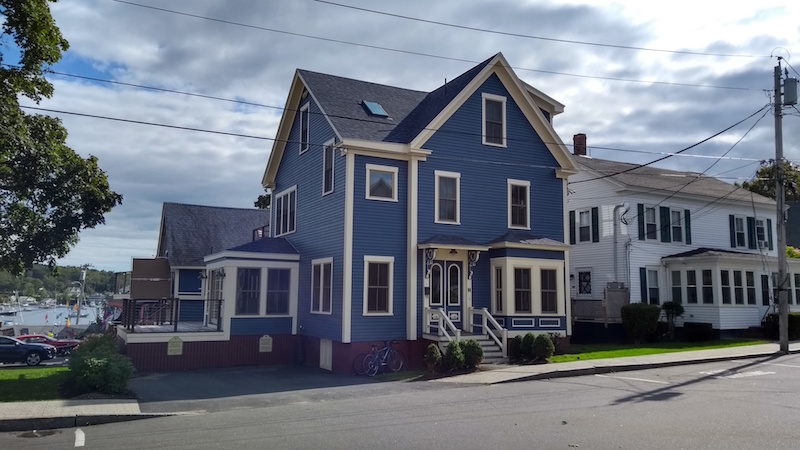 There was a lot of water. This was the view from my room. 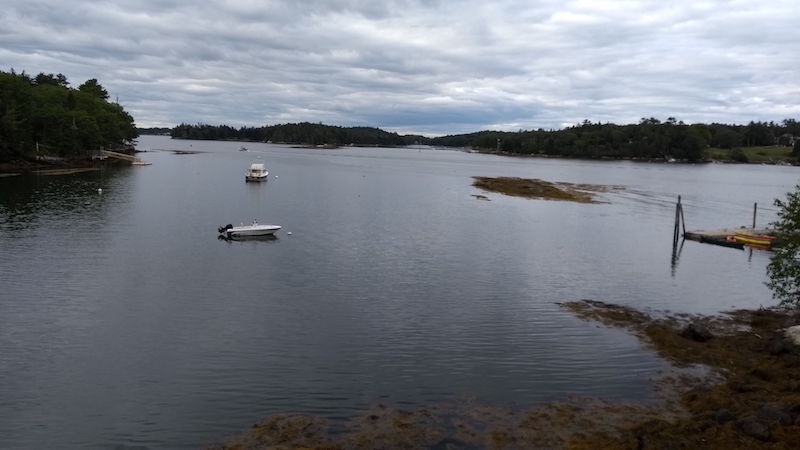 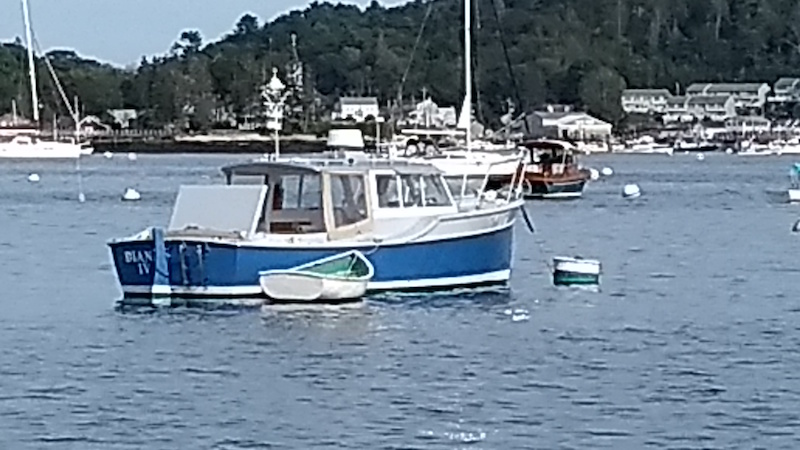 and thousands of islands, which you can see from this mount if you can keep your eyes open in the wind. 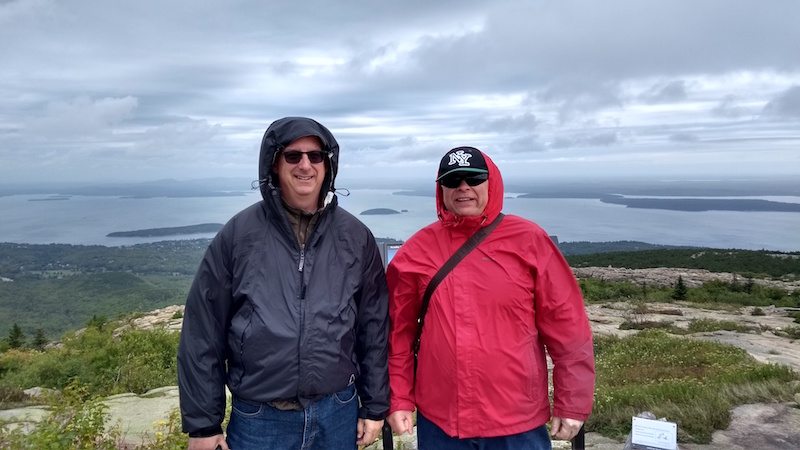 And finally, you'll be pleased to hear, we occasionally had dinner. Lobstah and more lobstah. 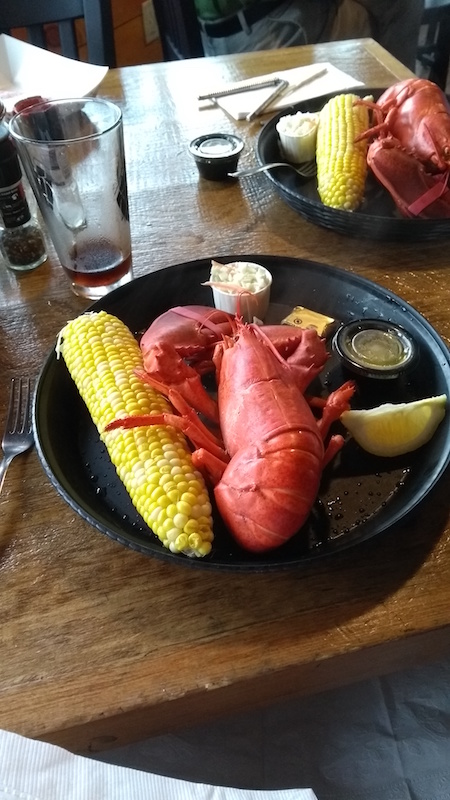 Delicious, even if it did cost a week's worth of shopping at Morrison's.

This was a Barbecue dinner. Ribs and Brisket. There is more on this plate than we had for a family of 5 inthe 1970s. I have a good appetite (OK not as good as it was, Tempus Fugit and all that, but I can still indulge), but this beat me. 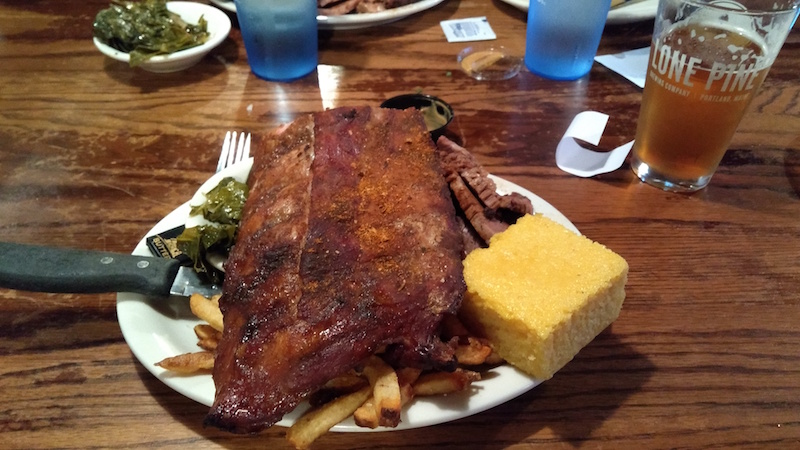 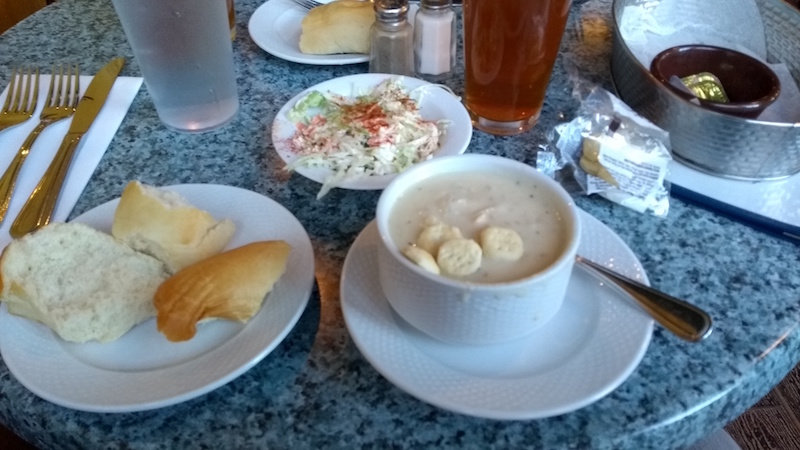 All in all a trip to remember. Immense gratitude to Dave for his generous hospitality.

doctor Bob":37wbvk4z said:
Did you take cheese?
I accidentally carried a banana into America in my hand luggage, discovered by a pesky spaniel. I thought I was going to get the rubber glove treatment.
Click to expand...

Yes I took over a kilo of cheese, plus an Irish Brack (I didn't risk a ginger cake in case the sniffers were Red Setters...), and whilst my bag was opened, nothing was removed.

I even got a decent bottle of Single Malt though in one piece, which is more than I managed last time.

The only galling aspect of this trip is that we have recently, by which I mean Too Late, discovered that Chris Becksvoort was less than an hour away and we could have visited the last remaining Shaker community (last because they tend to die out... )

THE MOST EXPENSIVE MULTICO TH... IN THE WORLD. (RESTORATION)
2

YAWN - Yet Another Workbench Newbie
5 6 7