These trees are growing on our land and they grow very fast and spread easily. I recently cut a few down and was interested to see what the timber looked like and I was also really keen to mill something on my newly made 20" bandsaw. I have my suspicions on what it may be but not entirely sure. Would anyone know what this is?

Has anybody any ideas?

Any photos of the leaves?
M

I can't get photos of the leaves yet until they come out.

Sorry - I was waiting for someone who knows...but the bark looks like birch to me. Pale green smallish leaves, if I remember rightly. I have never cut one open, so don't know what the inside looks like. Do they grow in your neck of the woods?

Any chance we can get some pix of that?
D

I managed to find a photo from last year. We have quite a lot of them around. From research I did the closest I could find was some species of willow but nothing was a perfect match. I always thought birch had a distinctive white bark but the bark from these trees peels very easily and stays intact.

My bandsaw is not quite finished yet but usable I have yet to finish the enclosure and give it a lick of paint. It's Mathias Wandels 20" bandsaw with a 2hp motor. I'm planning on making a post about it once it's fully complete just haven't gotten around to it yet

Looks a lot like alder with the reddish hue to the timber and also the bark. Absolutely not birch, unless Irish birches are extremely different from Swedish...

Alder is beautiful to work as green wood. Was also used a lot for furniture in Sweden during the 18th and 19th century. Was often painted or stained to imitate mahogany.
D

Would it be red alder the bark looks very similar when I looked it up. That's the closest I've seen so far thanks Jorny
The leaves will be out soon

Are there any small cones? Alder form small cones that look similar to cones from coniferous trees?

Also, when you mill lumber, try to split through the pith and even remove it. Are you planning to work the wood green or try to dry it?
D

What time of year do the cones come out I haven't seen any.
I am planning to dry it I have noticed it does split easily
J

The cones come out in autumn. look around the tree on the ground or see if any still are stuck to the tree.

If there are any catkins it is probably a Salix, and most probably Salix Caprea. Sometimes willows can look similar to alders before they form the more typical bark.

Both willows and alders split easily when green (most woods are easier to work green). After you have milled the timber (split through and remove the pit to reduce cracks), sticker it properly and cover the endgrain with PVA-glue and you will have some nice material to work with in a couple of years. If you have some larger straighter pieces you can also try to split it with a froe or an axe and some wedges. Riven material is even nicer, especially if it is straight. You can also try to carve some spoons, spatulas or such from the green wood. Both alder and willow are very nice to carve.
D

I just had a good look around and couldn't see any sign of cones.
I had a look through a database listing all species of salix and salix Cinerea is definitely the smaller shrubs in the picture above I'll know for sure when the leaves come out if the larger trees are the same you could be right with Salix Caprea too.
Thanks for your advice it will be interesting to see what it finishes like. I have some spalted sycamore cookie slabs that it may match well with
T

+1 for salix caprea, goat willow. The 'buds' in the photo are the flowers, or catkins.
It can go strikingly orange when freshly milled but that will fade over time.

It definitely looks like some kind of willow, but goat willow here has a gnarlier bark - although that may come with greater age. There are a lot of different and hybridised willow sub-species.

Is that ground wetter than average (for Ireland)?
D

Were situated on sloping ground there are natural springs which can create wet spots and that's where these trees are thriving.
Y

Daniel.l said:
These trees are growing on our land and they grow very fast and spread easily. I recently cut a few down and was interested to see what the timber looked like and I was also really keen to mill something on my newly made 20" bandsaw. I have my suspicions on what it may be but not entirely sure. Would anyone know what this is?
Click to expand...

Your picture of the bark is very similar to my young ash tree:- 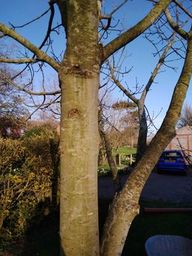 This particular ash is of the Rayworth or Claret, same thing, variety which originates from South Australia. It is planted as an ornamental tree noted for its red leaves in the autumn. I've recently felled a large common ash and the immature bark on that was much the same as this one. Also, interestingly, some of the newly sawn logs had a red blush which disappeared as the sap dried. Very easy to split as well.
The young twigs on your tree are ash like, ie, they hang down but flick up at the very ends. I've enlarged your general view (lovely house) and I think I can detect the pinnate, ie, long thin, leaf form of the ash.
All will be revealed when the leaf buds burst.
Brian
D