I'm going to make some alcove shelves with battons on the back and sides and face the front, thinking of using 6mm veneered ply for the top and bottom. I am really not sure what timber to use though, i was thinking of using 44x44mm timber, in my brain this seems more than enough for the weight of books and bric a brac but the length is approx 1.8m so it makes me nervous that this might not be strong enough, it will have ribs between the back and front for rigidity, can i get peoples thoughts on if this would be strong enough and if not what wood would be a good alternative, i want to try to keep the shelves thickness to about 50mm or there abouts. Thanks, i have attached a picture i stole from the internet as my example. 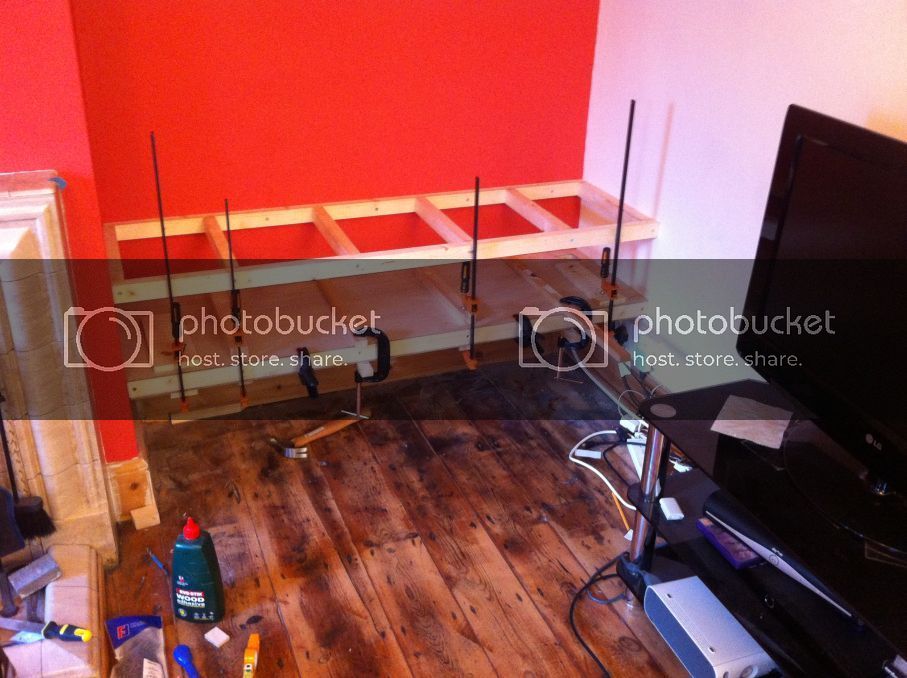 1.8m is a big span, however with a batten on the wall too, that should be fine. The thickness you are making them will make them look solid and not skinny too, even if thinner could still be stiff enough

This handy cloud app may be of use to you

TheTiddles said:
1.8m is a big span, however with a batten on the wall too, that should be fine. The thickness you are making them will make them look solid and not skinny too, even if thinner could still be stiff enough

I was thinking of doing double thickness across the front to prevent the front potentially sagging. this is why im not sure if 44x44mm is thick enough wood.

I suspect 44 with ply each side will be fine, but if you aren’t sure use ordinary cheap ply and make a single prototype which will also help you refine the look and process before using your nice material?

If you can employ a vertical rib of steel that would easily sort it. Box, channel, angle or even flat strip screwed to the timber. A vertical rib of 40x3mm would be hard to distort...although if flat strip is used it wold need the support of adjacent timber to stop it twisting out of plane.
S

A slight roundover or chamfer can help reduce the visual weight of a component.
R

You should be fine with that design. With a torsion box its the glue line that gives strength so you would need to glue the 6mm vereened ply properly with clamps - don't use contact adhesive. One method I have used for thick shelving is to use ( new ) flush doors. They are nothing but torsion boxes after all. When you cut into them you expose the 'eggbox' interior and you just need to glue in a slat between the outer skins along the cut line and the strength is restored. You can veneer over them if needed but don't use a vacuum press or they may collapse ! They are 880 wide so ideal if your alcove is 440 or less.you will get two shelves from one door
P

Use another span left to right. I've done loads of these. Usually 2x1 battens around the walls. 2x1 Front span, 2x1 mid span. 6mm Birch ply well glued with pva and pinned. Front face capped off with more 6mm Birch glued and pinned. Very solid. The torsion box really works. Most of ones I've done have been around 1200, but I've done longer and used 3x1. I've been working on having an overall shelf thickness of roughly 5% of the span, which is probably overkill but it works. The shelves are very robust. If you're not piling loads on books on then I reckon your 2x2 will be fine.
S

I made a 2.4m shelf of otherwise similar dimensions in my kitchen, full of books and tall jars etc. It is rock solid - fixed to the wall with epoxy bonded studding. The span isn't an issue if you are supporting from the rear of the alcove rather than the sides.
A

What would people suggest as a good size of wood to use for the battons and front i was thinking of 44x44mm i see a lot fo 3x2 etc is this inches? im just use to metric so struggling to work out wood sizes.