So I've got a bit of a problem, I built this play table for my son where it's a hoop basically with some supports and 3 legs with a Lego insert plate.

Unfortunately... when you lean on the wage right between any 2 legs, it's a bit on the top ply side, not ridiculously so but inevitably it's going to happen at some point.

I've tested it quite a few times and it doesn't fully flip, but even so toppling onto its side and potentially him isn't ideal!

Does anyone have any suggestions? I don't understand enough about tipping to know what would make it better, I assumed the reasonably short legs and the width would have been reasonably adequate. I have a coffee table that is smaller and taller and it does it probably equally so.

I have a couple of ideas... so the legs are rounded, would flattening the legs help at all?

Adding weight suspended from the middle seems to help quite a bit, the reason it has a hole in the middle is to push toys through into a bag though so that's a issue with adding weight.

The least ideal idea is to attach weight to a specific leg. Say the one which will be in the room corner but that may look ugly and I'm not 100% sure the best way either.

Shame as its came out lovely! :shock: 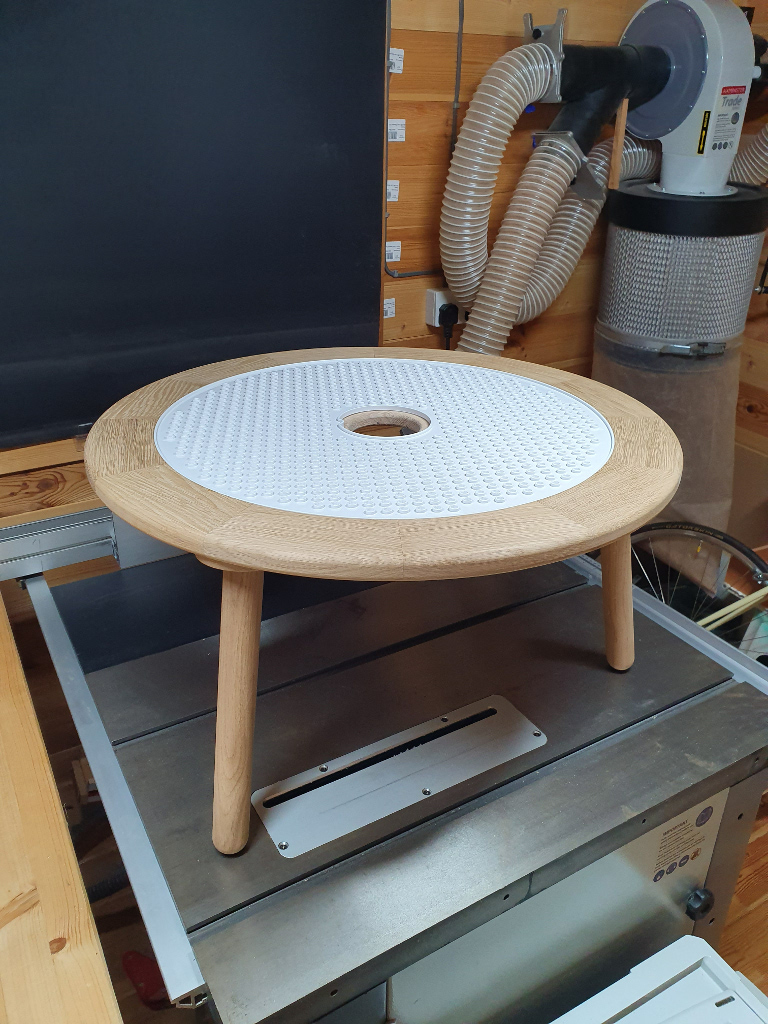 Don't know if those images are working right from Google drive... I can right click and view image but cant see them in this post
C

Still cant get it to work with Google photos either...

Could you make a ring around the bottom to remove the pivot points? Wouldn’t look as fancy but could be a simple fix

Tipping is all to do with centre of gravity. As soon as the COG passes a straight line between any two legs, the table will tumble.
So the options are either to lower the COG or to move the legs further out.
you can lower the COG by reducing the height, or making the top lighter, or adding weight at the bottom of the table. You can move the tip lines out by splaying the legs more. I'm not suggesting that any of this is trivial given that the table is already made.

Simon89":g4uv5rlk said:
Could you make a ring around the bottom to remove the pivot points? Wouldn’t look as fancy but could be a simple fix
Click to expand...

Even simpler would be to add a circular plywood base, at least 12mm I think - flat on the floor - wider than the table by a smidge. If he likes to sit at it to play this is ideal.

If he prefers to kneel, feather out the edge of the plywood - as shallow a gradient as you can manage so there's no hard lip for knees to get caught on, maybe even add a layer of foam?

Could you not make another leg so it's got four instead of 3? Obviously you'd have to move the current legs around a bit.
C

Would a fourth leg reduce the tipping all that much? The edge of the table will still come out further between the legs than the legs themselves.

I did consider this, it would make a pigs ear of the underside moving everything around but it is doable if it would help remedy more than slightly?

Again talking of shorter legs, I mean would an inch or so help or are we talking substantial chopping to get it rock solid enough to lean on?

Thanks for the suggestions!

hah and yes absolutely, i wouldn't be suprised if he's climbed up on top of it in the first 5 minutes...

I haven't decided what i'm going to do yet, i've looked at it for a long while but nothing is jumping out as an ideal solution :/

I think you will find spiders are Arachnids and have 8 legs :wink:

Steve Maskery":1v7p2gms said:
Tipping is all to do with centre of gravity. As soon as the COG passes a straight line between any two legs, the table will tumble.
So the options are either to lower the COG or to move the legs further out.
you can lower the COG by reducing the height, or making the top lighter, or adding weight at the bottom of the table.
Click to expand...

I think it depends whether the hope is to just stop it tipping over completely, or to stop the feet coming off the ground when the user leans on it - as they will to reach the middle. If you want the feet to stay on the floor, the height makes no difference. It is just a see-saw with the line connecting a pair of legs as the fulcrum - As you move the legs outwards, you give the mass of the table a bigger lever, move them in and you give the leaning child more leverage to tip it up. From where you are, six legs or a ring connecting the feet - which could echo the (nicely done) rim of the top - would be the easiest.
You must log in or register to reply here.
Share:
Facebook Twitter Reddit Pinterest Tumblr WhatsApp Email Link