"Tools from our family" or "Toolbox genealogy"

Had a post on my thread about a saw from mhn, see below.

mhn said:
I have what looks like exactly the same saw in my tool box. I inherited the saw and the other hand tools in the box from my dad. He started his joiners apprenticeship in 1933 in the joiners shop at a colliery in south Yorkshire and I am guessing he would have been buying his tools from then to the start of WW2.

I've always claimed to have had the longest joiners apprenticeship on record, from being about 5 to probably 15 years old. He was for ever taking hammers out of my hand and giving it back to me to hold at the end of the handle and telling me to saw "as long as you can for as long as you can". I must have spent hours holding on the the end of long lengths of timber while he sawed them up by hand. When he got fed up of me in his small shed he would send me to ask my mum "for a long wait"
(Nostalgia is fine but its not as good as it used to be)

It costs me more to have what I still think of as his saws sharpened than to buy new disposable ones but I wouldn't do without his Henry Distan tenon saw of a similar vintage.
Click to expand...

Perhaps everyone on the forum who has been lucky enough to inherit tools might post a "flat laid photo" with the story of the person(s), with at least

Tell us about them, they could have been family, workmate or just someone who wanted you to have the tools because they recognised you respected what they valued.

Also thanks to "t8hants" contribution, if you have bought a tool and have researched the story behind that, share that with us, that fits the definition of "Toolbox genealogy", who knows maybe you will see someone unearthing one of you ancestors tools....

This is not limited to just woodworking tools, but anything with tools. Could be sailmakers to hand weaving or cobblers!

This could build a great understanding of what a Hobbies/home DIY/trades/Crafts person would have considered an essential selection of tools. All you members around the world, join in, seeing differences or similarities is interesting!

A "toolbox genealogy" project if you will. The "Benjamin Seaton" toolbox through the ages?
Last edited: 26 Dec 2020

How about a photo of them in their usual working attire? Interesting to see what people wore whilst using the tools, and the conditions of work?
D

Great ideas - unfortunately can't do this myself although a couple of generations earlier, my ggggfathers made furniture in Deal, Kent (and fished, and ---) not too far from B Seaton. Of my parents, my dad was definitely not a craftsman -- my mum was the maker and builder, but she thought of the tools as fairly disposable.

But if I buy a tool (or recently toolchests, a bench and vices) it's great if there's some background to its use - strangely enough, there's a theme to several I have acquired from different places - carriage/coach works (as in railway and charabanc, not horse and) -- when I think of all the wooden fitted rail carriages it's maybe not so surprising, but we don't hear as much about them, although quite a bit is written about the horsedrawn variety.
T

My dad passed in 2004 at age 81, and in the decade and a half prior, he gave me most of the hand tools he used. Between now and then, the line between what he gave me and what I bought, is gone! I suppose the best statement is, his tools have been used!

I can't do it for a family tool, but I did research the name on an old guage I bought in a junk shop. 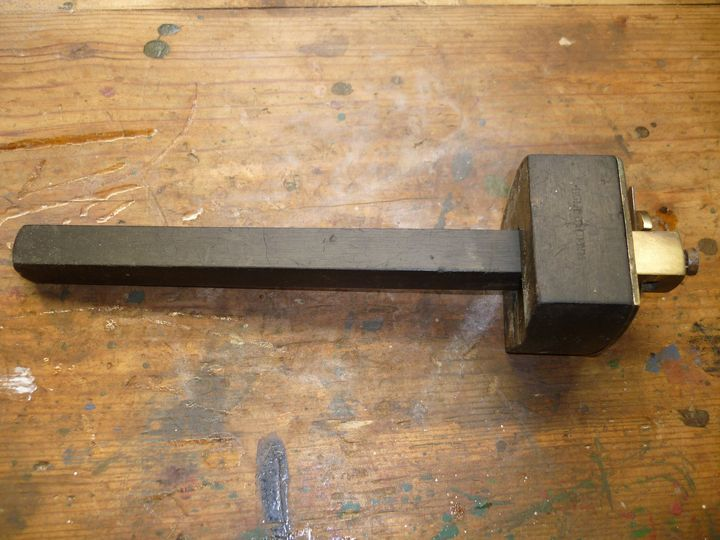 When cleaned it revealed a name. B. Luckham, as Luckham is not a common name, I thought I would try and track down the original owner. This is what I found.
Bertie Tom Luckham, son of Edmund a woodturner.
Born 1875 Wimbourne, Dorset
1901 Lodging in High Street Wootton (I.W.), trade Carpenter
He sang with the Wootton Brass Band, was a member of the Wootton Bridge Rifle Club and played cricket for the village.
in 1906 he Married Edith Holloway
By 1910 he was a Lance Corporal in D Company in the Isle of Wight Rifles, my Grandfather was also a L/Cpl in D Coy.
1911, sees him now living in his own property in High Street, Wootton, and is listed as a Builder & Contractor, as was the often the case then, he conducted funerals as well.
He appeared as witness to a runway horse-drawn van accident in the local courts.
At the start of the Great War he did not sail on active service, and was discharged as medically unfit in 1916.
Sergeant 520 Bertie Tom Luckham died of a heart attack aged 42 on 4th February 1917 and lies in St Edmund's churchyard under a CWGC headstone.
His estate was valued at £1071 1s 11d a reasonable sum in those days
All that from one old tool bought in a junk shop

t8hants said:
I can't do it for a family tool, but I did research the name on an old gauge I bought in a junk shop.
Click to expand...

Oh, Wonderful story! Yes lets include tools you have bought and know/find a story behind. I will edit the opening thread. I do Ancestry myself and when you get on a trail like that and it all reveals it is very exciting.

23 Jun 2022
heimlaga
H
D
Be thankful about budget if you hobby build with mostly or all hand tools...