Three Weeks Worth of Boot Sales

So I haven't really had time to put up any boot sale acquisitions for a couple of weeks, but Jimi said words don't cut it, so here it all is. I can only remember what a few bits cost, but i have a £15 ish budget and rarely go over it. Can't remember which week they all came from either.

Anyway... £1 bought a Vaughan & Bushnell 4 1/2, unknown maker to me (I understand the Vaughan is that of the expensive hammers), although I do remember someone else having one last year. Drop forged steel rather than cast iron, not sure if that's good or not, but it weighs as much as the next plane down.

Leytool ratchet, 50p don't know what it's for, my wife 'felt sorry for it'. The hole is round with 2 flats opposite each other (the ratchet, not the wife... )

I love old woodworking and workshop books, especially from the early -mid 20th century. 'Carpentry and joinery' 5 volumes by Ednie and 'The practical Handyman' by Wheeler £3 all in. It seems that if it's not on a Kindle, people are losing interest...

Record Junior 51 clamp on vice, more of which in an upcoming post when I get another minute

Finally a couple of basket cases English Stanley No.4 and a Woden 4 which has been spray painted pale blue all over except for the cap iron, blade and lever cap which have been painted silver!

Hi scouse the v and b plane was me i had a no.5 could i tempt you to swap this for some beer tokens?

But a very nice haul, the books look great!

hi why is number 04 stanley a basket case what is it worth or swap for 044?

And for £15...well I frankly don't understand why people shy at getting up early...that's got to be a major bargain!

I have to mention the Roberts radio first...as I have a huge soft spot for those gems. About ten passed through my hands last season for at least 10 fold profit...and I think they were a large part of my tool fund for the year. They are simply a no-brainer as almost everyone has realised how good the old ones are...and that's a nicer one of the bunch!

I have a feeling that multi-planes can very easily become a steep slope...I have now matured past the "fiddle with the knobs" stage of many 50s 40x models and have now settled with the dinky 043. It is a classic as we have discussed at length. Anything else..I will stick to my plough!

I suggest you get a really rainy weekend lined up...a protective layer on your bench...some de-rusting stuff (whichever process rocks your boat) and some fettling gear and do a multiple run at all the planes you have queuing for restoration. Resale on FleaBay should net you enough for a good many weeks of bootfairs!

Skipping over the wrench quickly to the books...they are indeed becoming more common and if you can find someone's boxed library whose grandad or father was a woodworker you are into a goldmine of information. As you know, the old books are a mine of useful knowledge and make great reading for sultry nights or winters in front of the fire.

That's a good assortment of quality tools. To me, it would just be a case of cleaning them up and finding room for them. It's as if they have all come home to a place where they will be appreciated.

But then, a rolling fund could fund more purchases - maybe the key is to have the fund in something you don't like yourself, so you can easily move it on - so maybe not tools at all!

Thanks chaps, to be honest this years boot sales are being funded by a load of bike gear I sold over the winter, so I guess it is a rolling fund of sorts!

Noooo! £15 a sale! There's only one person I know could get that lot for £15 total... naming no names, but he likes infills and the occasional radio... :wink: :mrgreen:

Aditat, I found your post from last year after I posted this; thanks for the offer, but I'd quite like to do a bit of sympathetic restoration. I'm a bit of a fan of tools that need a bit of research behind them!


AndyT":23j3z3qx said:
To me, it would just be a case of cleaning them up and finding room for them. It's as if they have all come home to a place where they will be appreciated.
Click to expand...

Finding room is an issue, but I'm sure there's some somewhere! I'm just finishing a W.S. 5 1/2 that looked like this before (the rust hasn't really come out in the picture)

then I'll get cracking on these. I'll probably do as Jim suggests and derust etc all in one go, and take photos for another WIP... the more pics the merrier!

Those WS planes have a bronze lever cap if I'm not mistaken?

Here's one I bought last year.

jimi43":1gal11rr said:
Those WS planes have a bronze lever cap if I'm not mistaken?
Click to expand...

Yes - bronze, brass or gunmetal. And in two styles: a) with 'WS' in raised letters in an oval (as shown in this thread); or b) a more basic 'WS' engraved (amateurly) in large letters.

And note the centre portion at the leading edge for undoing the cap-iron screw.

WS is another of those British companies about which little information is forthcoming. I know about the Woden/Record takeover in the early fifties, but that's about it.

British tool making does seem to consist of an intricate web of numerous Hamptons/Chapmans/Tyzacks/Sorbys/Marples... the list goes on. It's frustrating, but also intriguing at the same time.

Art of Violin making. Although still available new, it should fetch a reasonable price.
V

I'm home now and can access my collection of trivia. Here's a photo of my WS No.4 showing the other design of lever-cap. The "WS" is very crudely etched/engraved/cast into the lever-cap. 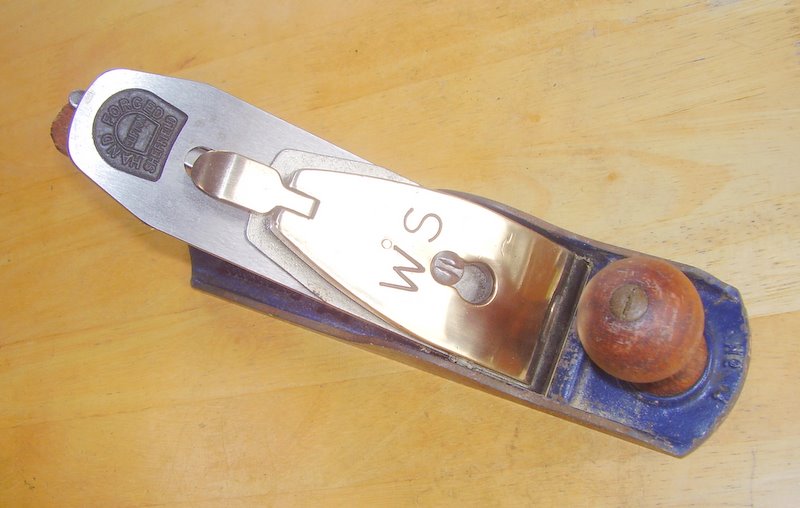 Scouse":1eulg2wj said:
WS is another of those British companies about which little information is forthcoming.
Click to expand...

All I've managed to come up with is: The WS Manufacturing Ltd of Quadrant Works, Sheepcote St, Birmingham. Bought by Steel Nut & Joseph Hampton (Woden) in 1952. There must be someone out there who knows more (or someone in Birmingham who could do some research). 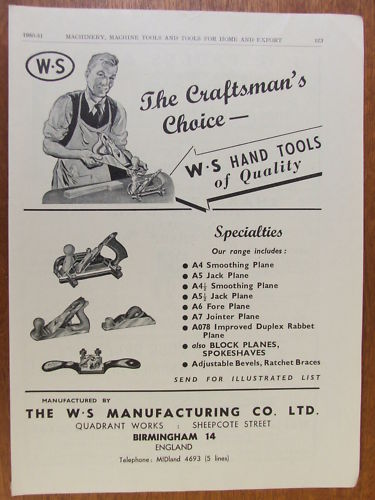 adidat":2e34bngj said:
Hi scouse the v and b plane was me i had a no.5 could i tempt you to swap this for some beer tokens?
Click to expand...

where do you go for carboots? my local ones are absolutely pants, got a record number 4 last week but that's been it for 2 weeks. endless children's toys and junk is all i seem to find.

jettagreg":3si77na9 said:
where do you go for carboots? my local ones are absolutely pants, got a record number 4 last week but that's been it for 2 weeks. endless children's toys and junk is all i seem to find.
Click to expand...

jettagreg - The one we go to is a good way off, in fact we pass two other, more local Sunday markets on the way. I've found it well worth venturing further afield to check out all the possibilities.
Steam fairs are well worth a try too.
You must log in or register to reply here.
Share:
Facebook Twitter Reddit Pinterest Tumblr WhatsApp Email Link