DBT85 said:
I assume you are certain that your larger sections are properly square and so on?
Click to expand...

I will double check this but from dry fit up before making the domino holes it looked to clamp up Ok, but will spend more time re-checking as the quality of this redwood is not fantastic, supplier has shortages, cannot get deliveries this side of xmas and is not spoilt for choice. This has made me remember I do have some good sapelle offcuts and I will try some joints on these as well.

Spectric said:
I think this is some of my issues, and I like the idea of sanding down some test domino's . I have cut a pile of pieces from my offcut pile and will methodically do a series of test joints to see if I can narrow down exactly what is going wrong.
Click to expand...

AFAIR it was a right hand problem (I am right handed) now my left hand holds the head of the machine in position and my right hand just turns the domino on and pushes forward.

AFAIR It is surprising easy to get a wonky hole if you allow your right hand to do anything other than push the domino forward. I use the Domiplate from Seneca, it’s so old that it isn’t anodised, for many/most joints, I also have a pins not paddles Domino though the paddle version is safer as they can’t fit into a previous Domino hole, (yes I have been caught out putting a hole in the wrong place).

The other thing I have is some custom sized thicker (8mm + 10mm) dominoes that fit the widest wiggle setting they don‘t have rounded sides just the corners knocked off as perfect rounded sides make little to no difference to strength.

There is also the FOG that forum has some discussions of how to use the Domino correctly, with new users often finding out exactly what they are doing incorrectly, I’ve been a member since 2007 before I found this site. Maybe my learn curve for the Domino was so shallow because I had already read about other’s problems IDR.
S

Well I am also right handed and using my right hand to hold the head of the machine in position, but at the same time taking the stance you would if using a file or hacksaw to something in a vice. Will look at FOG and see if there are any tips, thanks.

I think that going by the laws of probability I am either overthinking or doing something silly, there are lots of online videos showing success so it may just be a steeper learning curve than I expected. I am also so used to my Dowelmax and take precision for granted.

My method of using the MFT and benchdogs fence, along with a spacer that the 700 sits on gives consistant vertical positioning but I must always assume relative positioning as with the Dowelmax and nothing absolute so marking reference faces is important. My aim was first spacer of 5mm to locate lower domino at 20mm in from the edge, next spacer of 5mm + a 30mm to set upper one 20mm from other face of the 70mm wood. The 30mm consisted of 18mm Mdf and a 12mm spacer. Errors here were the 5mm spacer was actually 4.65 and the 12mm spacer was 11. 55mm so lower domino was 0.35mm lower and upper one 0.8mm lower so not an issue if always referencing from bottom face of the wood on all joints, but had spacers been more accurate then these two holes would have been the same from either face. I will add that although referencing from the base the fence was adjusted to sit on the top so front handle could be positively held. It was interesting that the Domino gave better results on the Sappelle than redwood but Dowelmax did not change.
S

Another thing to simplify joints is number of domino's, so in a 70 by 45 section would you use two 12mm or one 14mm domino? 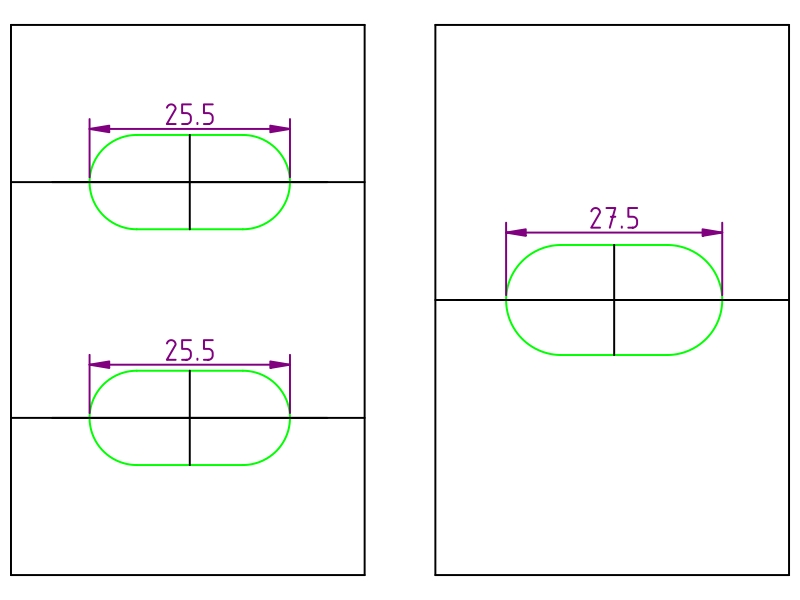 I'm right handed, I hold the head of the machine with my left hand and push with the right, I can't imagine doing it the other way, it would be all over the place.
S

Doug71 said:
I'm right handed, I hold the head of the machine with my left hand and push with the right, I can't imagine doing it the other way, it would be all over the place.
Click to expand...

Very interesting, I am mostly right handed but to some extent either but my natural/automatic or instinct is the opposite and the other way is possible but not natural for me.
R

I see some people on YouTube simply plunging the Domino into end grain just using a pencil mark. This will introduce errors - I'd consider the the work holding accessory under the fence pretty much essential.

Spectric said:
Well I am also right handed and using my right hand to hold the head of the machine in position,
Click to expand...

Your explanation is hard to visualise to say the least. I’m sure it makes complete sense if you already know the situation, but as I don’t it’s probably too abbreviated.

recipio said:
I see some people on YouTube simply plunging the Domino into end grain just using a pencil mark. This will introduce errors - I'd consider the the work holding accessory under the fence pretty much essential.
Click to expand...

Not at all, pencil marks work just fine for me, at least they have for over 10 years.

If you're having accuracy issues Spectric, I'd be inclined to verify the setup of the tool first. The "supplemental manual", besides having a heap of great info on the Domino, has a section on calibration, how to check it and sort it if need be - page 21 onwards. It's a right riveting read too

Bald industries is proud to present........ The bladimo system!!! 😆🤣 Bear with me while i type this. So to preface this, im using it for 18mm carcases, although as you'll see, it can go to 25mm thickness material if needed. First i had to fix my bandsaw and then whack out a few baldimos. I...