Just a question about setting thicknesser table on your pt's. Are people just using the scale on the machine or has anyone fitted either a DRO like the Wixy item or the readout that fits onto the shaft behind the handle like Axminster sells? I have the Record PT107 which closely resembles the axminster AT260 but the Axminster readout for the AW106 does not fit the AT260 because Axminster states:

"Unfortunately due to the calibration of the cutter block it is not able to be used with the digital high gauge. Our machines which are supplied with them are calibrated by the manufacturer. "

I don't see how the cutter block effects this but has anyone anything they can add?
D

I have the Axminster with digital gauge. It's very good. The issue will be whether the gearing on your machine raises the table by the same amount each turn
S

I do have two gauges but I ignore them completely. I just use a pair of electronic digital calipers to measure the thickness - that's because I often put the workpiece on something else as a carrier e.g. a torsion box so the readout is irrelevant. There is a scale e.g. 1/4 revolution is about 0.5mm - I think it's pretty accurate but I use the concept not the absolute reading.

If you are referring to a mechanical counter that counts thickness then the consistency would be fine once you have taken up any backlash as it's easy to make a thread that's consistent. The accuracy can be confirmed by measuring a test workpiece and then using the counter to take the thickness down a lot and remeasuring and verifying the overall accuracy. There seems little point in using the wrong "thread size" (pitch) in a design unless it's the nearest metric/imperial equivalent (seems unlikely).

Two mistakes I made were:

1. setting the digital calliper to zero when reaching the required thickness. The next matching piece kept getting smaller until I realised I had gone negative. Now I make everything slightly oversized and then apply one final pass to everything after using the caliper and an estimate of the amount of rotation required (seems to work exactly) and I don't zero it except the caliper with itself.

2. not using the calipers before I start. One workpiece was sufficiently difficult to require a few extra passes. When I started to measure it, it was also fractionally too thin. So I learned my lesson. Measure , measure and then cut...
M

I use a wixey on my Sedgwick MB. It has significantly improved the accuracy and even the usability of the machine. I’ve got the DRO calibrated so that stock coming out matches it’s reading when measured using a digital calliper. This means that I can remake parts much more quickly than before and with greater confidence if I have to, due to say not making enough in the first place or having ballsed up a component. Not that either of those happens. Ever. :-"
S

thanks for the replies, and I think having looked more into the Wixey 550 with remote readout this may be the way to go rather than the mechanical unit fixed on the shaft, the advantage being it directly measures the table position rather than indirectly via the mechanical gearing and lead screw. The bigest downside is that the Wixey could be more easily damaged considering the workshop enviroment but I am going to look at fitted it onto the bottom of the central column inside the machine nicely out of harms way and will show picture once done. Has anyone else fitted a digital readout inside their machinery?
M

I have a blade height scale fitted inside my cabinet saw. It does suffer from dust as do all capacitive DRO systems. If I were starting again I would use magnetic DRO technology.
I have a wixey scale on my thicknesser externally mounted and so is easy to clean.
S

I did have some concern over the dust and any issues it may cause, but the inside was relatively clean and very little dust is on the greasy lead screw so was going to take a chance. Do you know of any comparable units that use inductive rather than capacitive measurement techniques?
M

Lots of choice of magnetic scales on Google and possibly ebay and Ali-express too
I've not found any specific to P/T that have a need to set the zero in a position that cannot be achieved on the machine. Wixey have got this licked and is very simple to do.
M

I can’t give any insight into how eBay or AliExpress variants might work however this is how I’ve set up my Wixey (think it’s a 550): 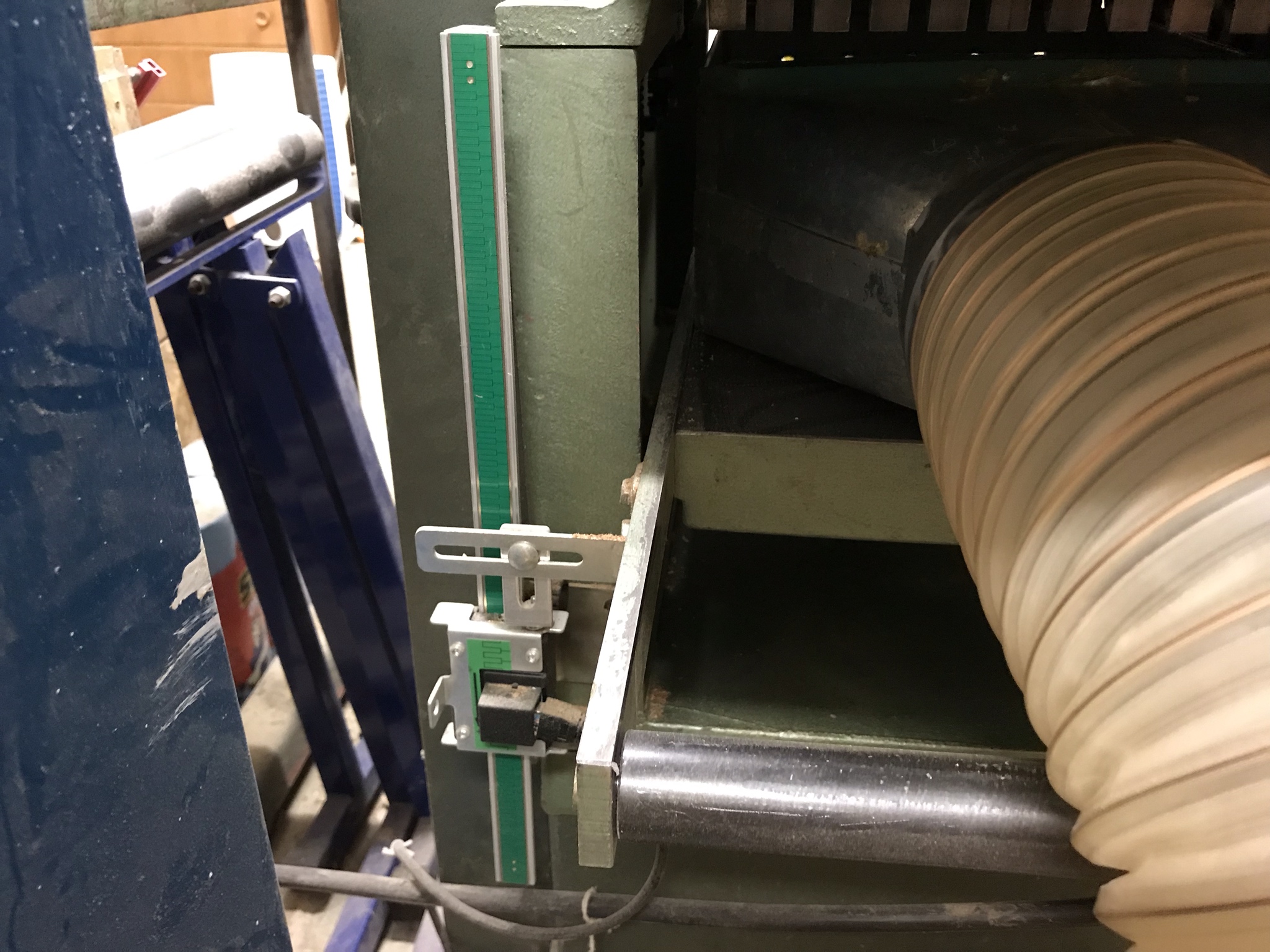 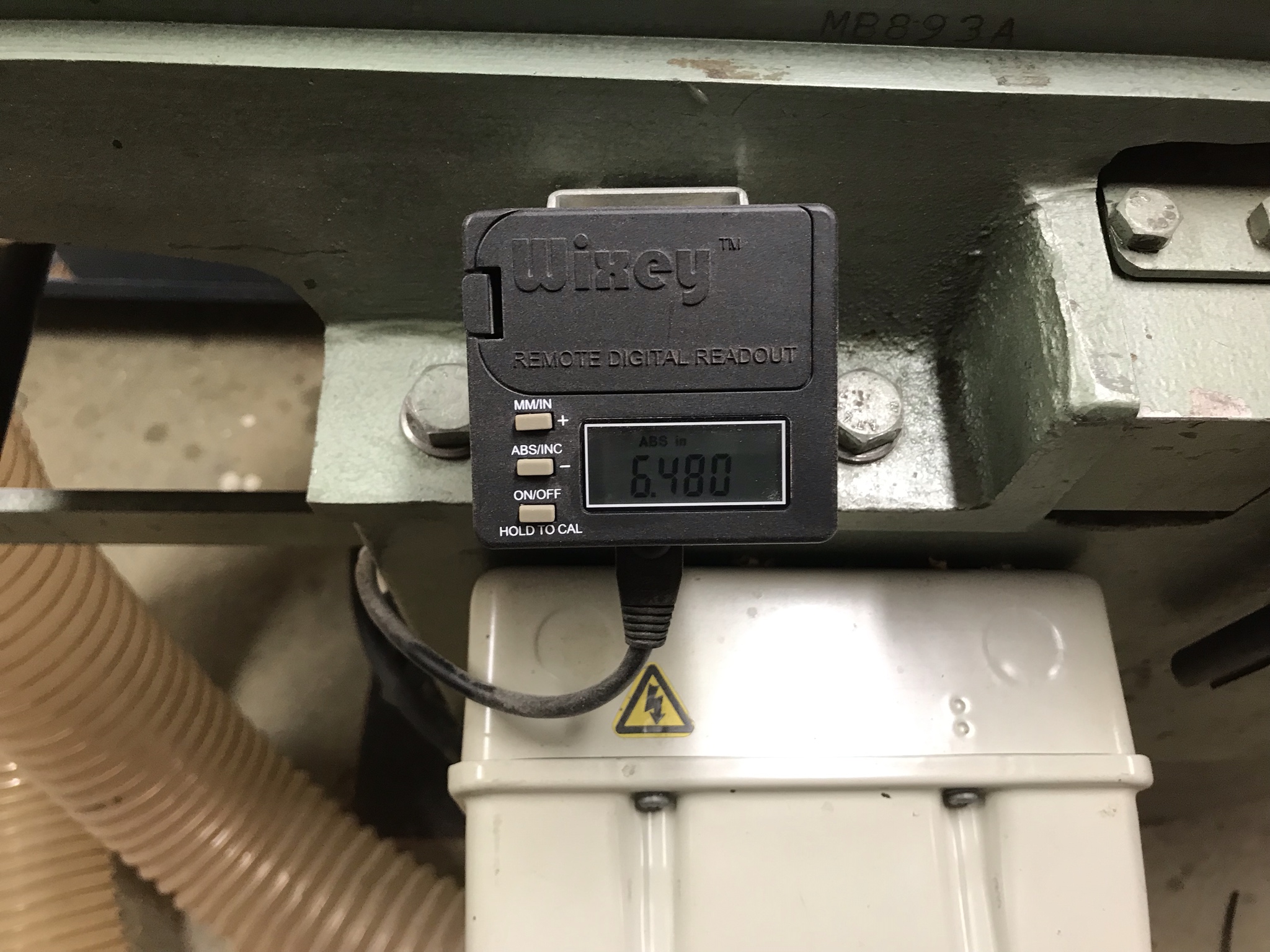 I’m really pleased with it and would recommend it to anyone looking for accuracy and ease of use from a DRO. I particularly like the way it renders fractions as I do almost all of my planning and marking out in imperial.
M

For this application, Wixey is ideal. Not sure if anyone has copied their calibration designs and sell cheaper versions.

G
Recommendations for a Planer/Thicknesser
2