A few years ago I was without a tenoner, having sold my TM3. But a joiner I knew had this elderly single-phase Multico lying in bits round the back of his yard. He was highly skilled with wood and metal, but said he hadn't been able to make anything of it. It might do someone who makes gates, he said disparagingly. I was tempted to have a go, and loaded the parts into my van.

After I assembled it, it was plain that it had issues that seemed more or less designed into it, which made me think that it might've been Multico's first attempt at a tenoner, even perhaps a prototype? The problems centred around the sliding table and bars - I couldn't get the travel to be firm and accurate, which made it useless. But also the geometry of the table travel past the heads was rather constricted, with not much room before the heads so you'd have trouble doing a wide bottom door rail, say.

But never give in. I didn't want to spend much, though - it was an experiment.

Solution 1: make a sub-frame to put the limits of the table travel where I wanted them.
Solution 2: come up with a new way of mounting the table.

So here's the beginning of all that (the old rails are on the right): And here's how it ended up: 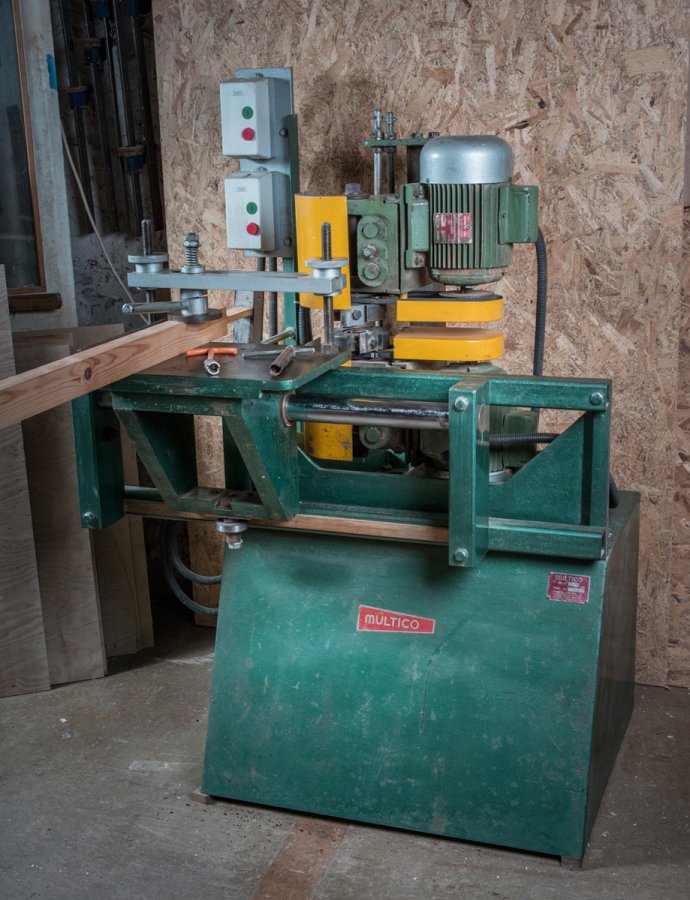 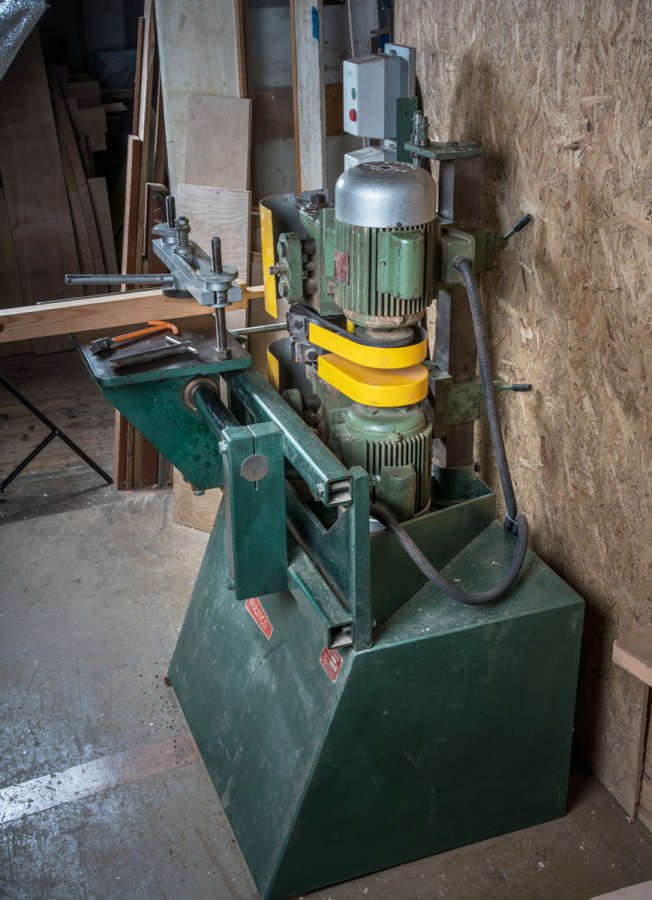 And to explain what's been done: A bit of fine tuning followed - table aligned in plane with heads, fence at 90deg to the travel - and off to work we went! Had it for a few years then sold it for an amount that covered what I'd spent on it.

The basic construction was a cast iron frame on a steel cabinet base, but the column-and-heads design was already mature and would go on to be replicated in later Multico TM's. Signs of age were present - there was a fair bit of backlash in all the adjusters! The blocks had an imperial bore; all fixings were imperial.

Somehow there's a bit of history here. I've never seen another like it, though I have seen a version with the same table (on bars set one above the other) but a wholly-fabricated box steel frame.

And I had no engineering facilities, hence the use of wood in certain parts!
A

I have some Multico diagrams but not of this particular generation of machine, I have the first issued diagram of the TM MK1V which is the very common type with the steel fabricated base that has a square shape to it and cast iron components like the table and mounting brackets which were made from fabricated steel later in later models. The diagram was drawn in late 1980 and covers machine serial numbers 1651 to 3150, so assuming they started their numbering from number 1 they had made 1651 tenoners prior to that generation of machine, which this could possibly be one of, you wouldn't happen to have a photo of the machine tag at all to show the serial number?

There's a very similar machine on eBay at the moment though with a box section base as you've mentioned in your post, but interestingly it has some kind of lever for controlling the table movement. 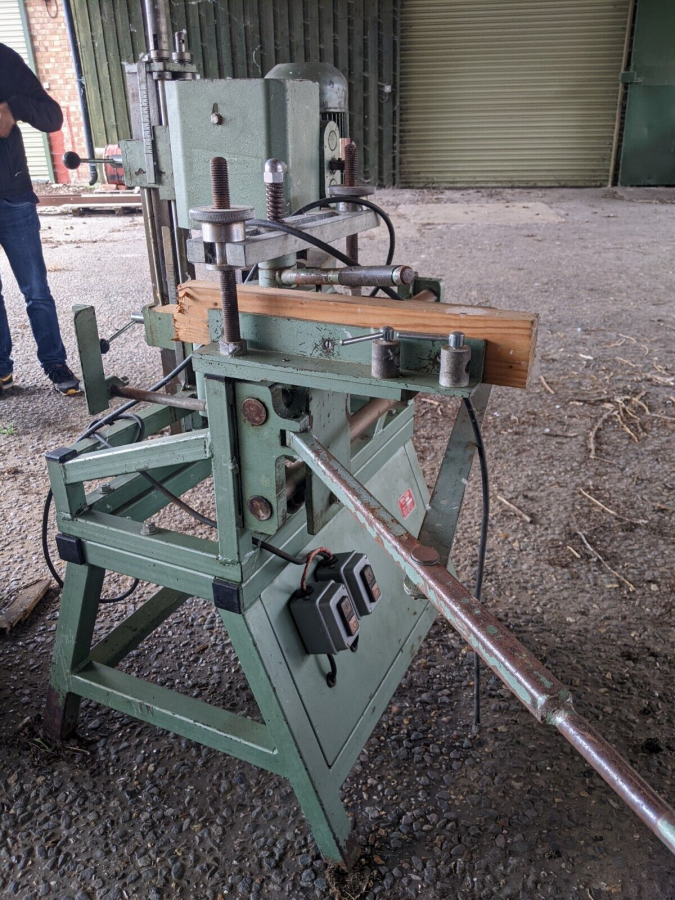 In the pics I have that include the maker's plate, it's too small / low res to be legible unfortunately. And I tried my best Photoshop enlargement skills!

I wish now that I'd recorded the original after reassembling it, for the historical interest. But the parts that I did away with, I can scarcely remember. However the table and bars were identical to the ebay one pictured, except that I don't remember there being the propulsion bar arrangement. And yet, teasingly, if you look at my first image with the original bars in, on one of the mounting blocks there's a lug ...

It also seems to me that on the ebay one they'd changed the geometry by moving the column to the right, thus modifying the ratio of before cut to after cut travel to a more sensible balance.

But really, the way of mounting the table was rubbish, and no wonder they went on to change it.

My current project is a Startrite sawbench, which is a finer thing altogether, and I'm getting the cabinet resprayed in Startrite green hammered enamel - if the bodyshop ever pulls his finger out, it's been a fortnight now and counting ...
D

You would use your right hand on the clamp to hold the work piece down and your left hand to pull the lever across which moved the table, that part of it worked well.

Unfortunately someone tried cutting a tenon on a piece that was too long and heavy and something below the table to do with the rollers snapped. It got repaired but never cut accurate tenons again (so was next to useless in my eyes), despite this my father still spent a small fortune on it upgrading it to limited cutters and electric braking when new regs came in all those years ago.

We never had any dust extraction on it either, it was just surrounded by piles of wood shavings, it was horrible when making anything out of Sapele, you could hardly see through the clouds of dust.
R

Doug71 said:
you could hardly see through the clouds of dust.
Click to expand...

Sounds like you're still alive, though, Doug. Do you cough much? ;-(
R

Just reminded me that with a small single-end tenoner and a large workpiece, sometimes you need to rig up an impromptu outrigger support - and one that's in plane with the table travel. A couple of adjustable stands or rollers and a length of timber, maybe ... or whatever you've got to hand.

Which leads me to reflect that part of the ethos of being a maker is that you do what works for the result you want with the least effort possible. There can be an elegance in the efficiency of that, which roots way back into prehistory and handwork. The test is that it's effective. Look at David Pye's bowls - effort and result are exactly in synch! I increasingly get the impression that people are prone to thinking that you have to buy some over-priced gizmo, often anodised in gaudy space exploration colours, to do any craft work. That's how the consumerist suction works. When all that you healthily need might be a drawknife and knowing how to sharpen it!

A bit brief and garbled, but worth saying.

Insight is worth more than a fat wallet.
J

love my multico and I reckon they probably did make thousands. the spindle table that replaced the sliding table is so rare I've never yet seen one( only on the advert)
A

johnnyb said:
love my multico and I reckon they probably did make thousands. the spindle table that replaced the sliding table is so rare I've never yet seen one( only on the advert)
Click to expand...

I also have the diagrams of the spindle table attachment (STM), the double ended tenoner (DTM), and also some diagrams on tooling for the machine. I’ve never seen the spindle table, which I would guess would be because it must’ve been an absolute nightmare to set up compared to a regular spindle moulder or even a radial arm saw with the head turned horizontal.
J

I agree taking everything apart and putting the table on would be a nuisance. the tenoner and spindle working in tandem is so natural it was an idea to far. maybe they envisioned the tm as a hobby machine( it looks a bit skeletal) but it's very heavy but once set up cuts tenons as well as any. I have seen a dtm for sale( essentially two linked tms) I think it suits joinery size tenons well( bit small for heavier and longer(say stringers)
A 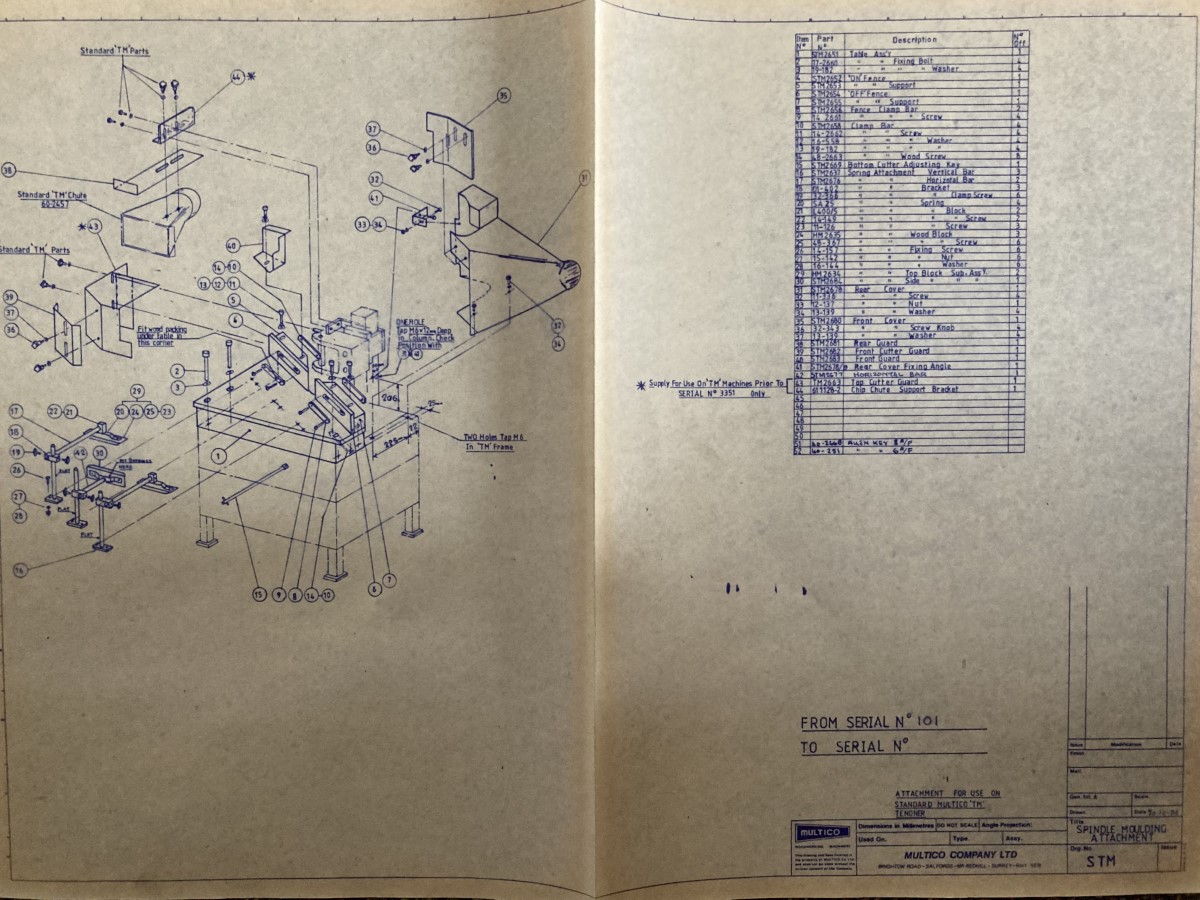 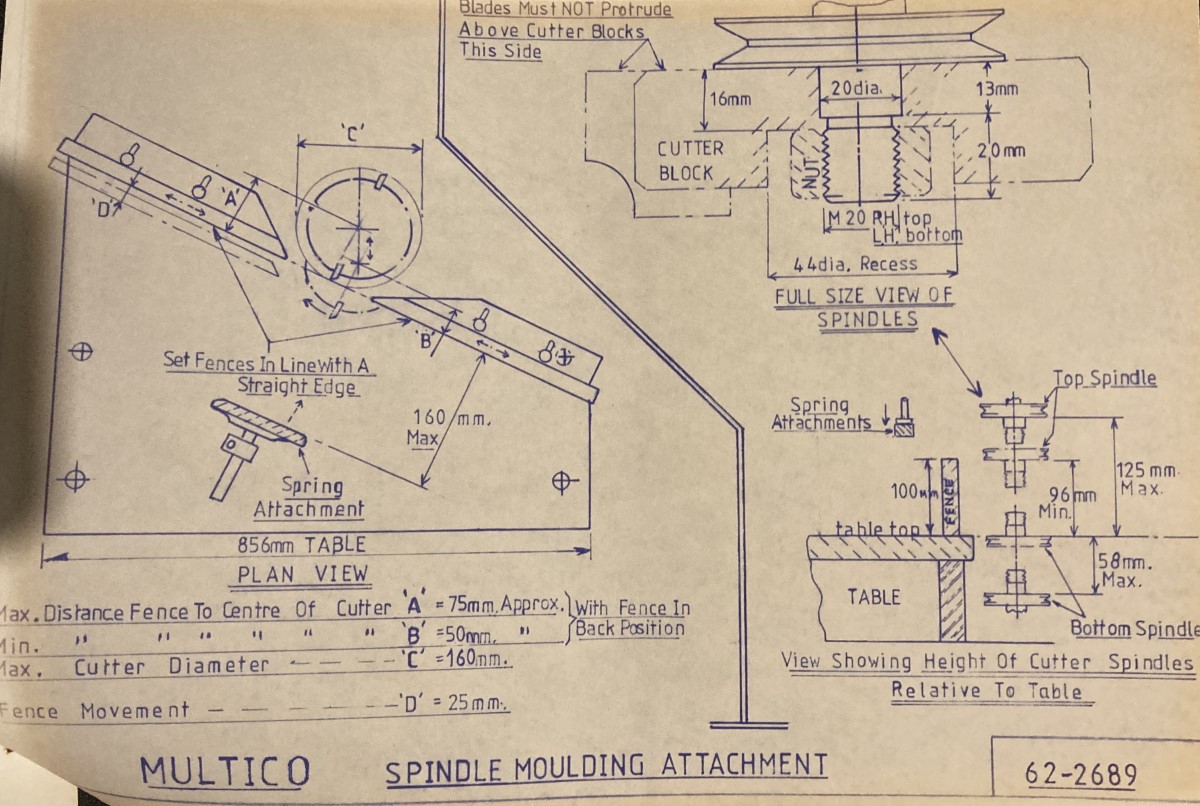 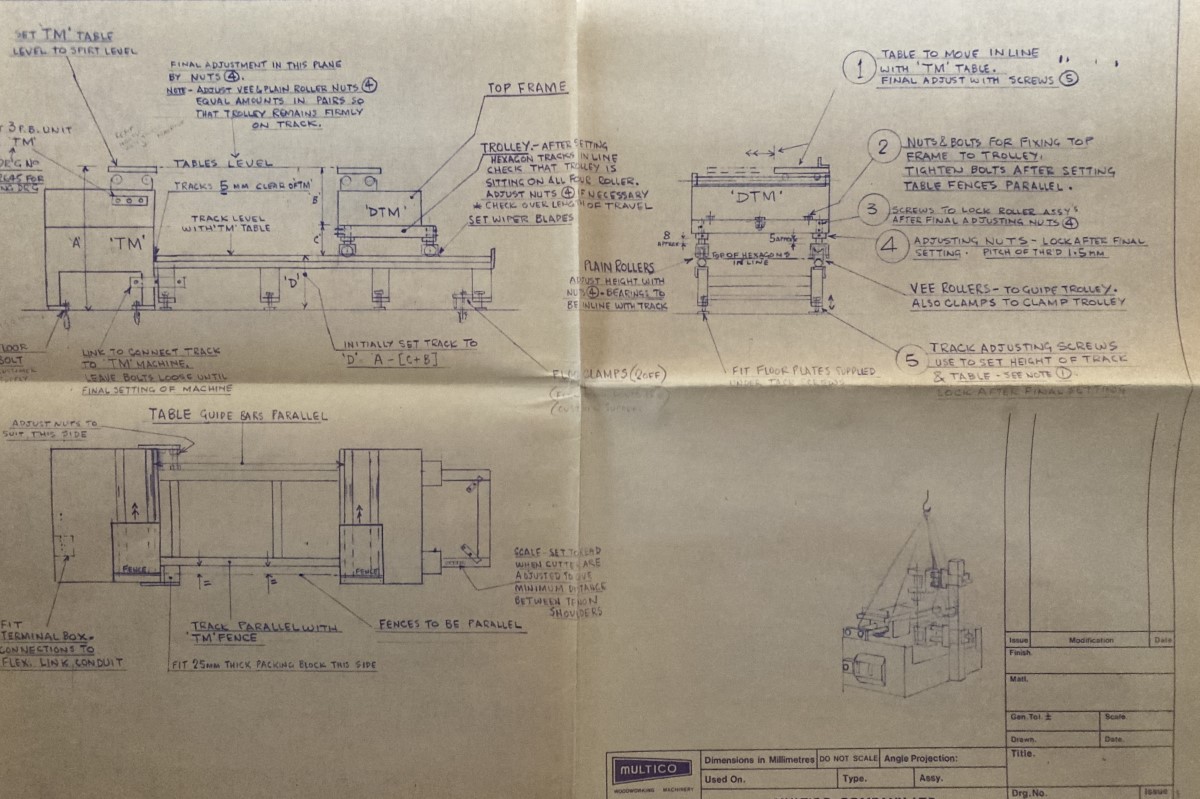 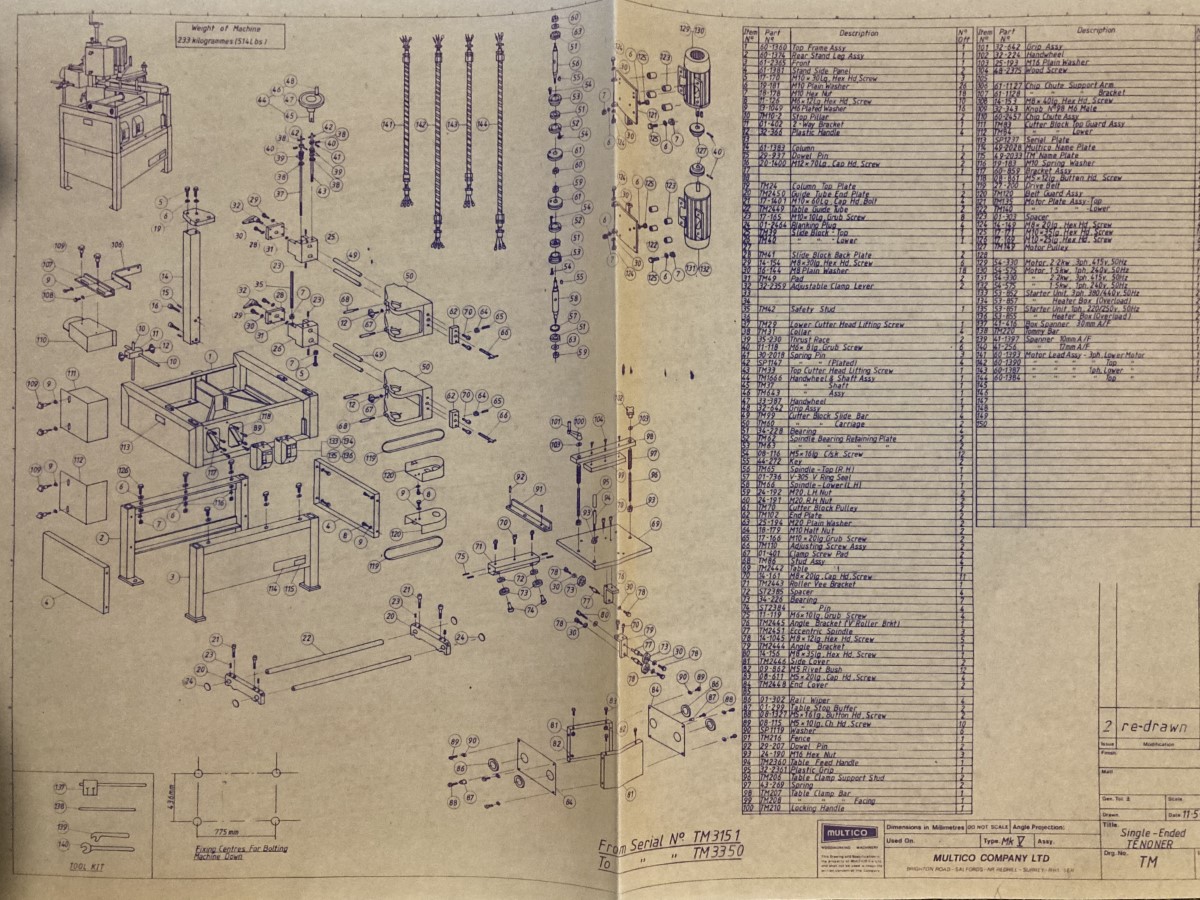 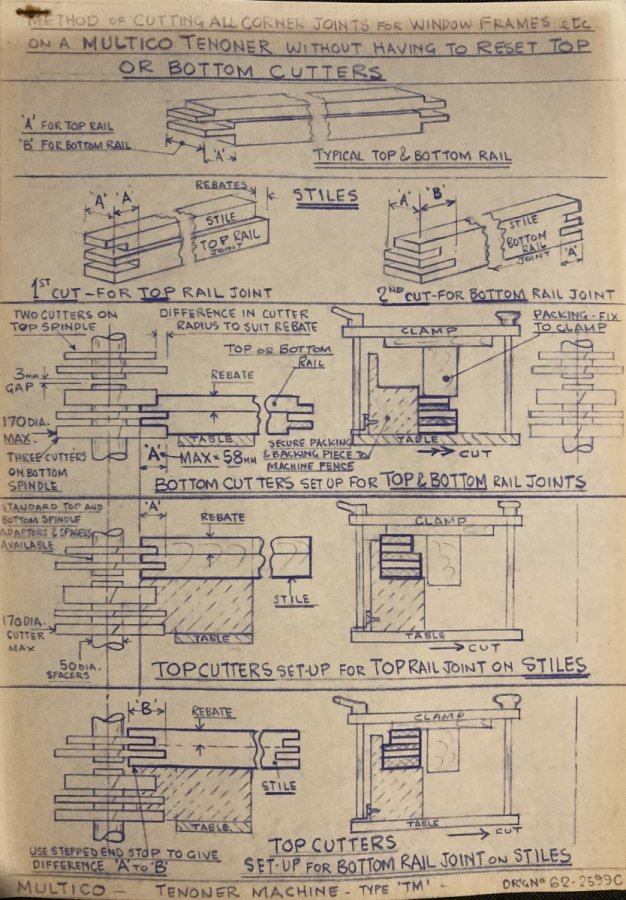 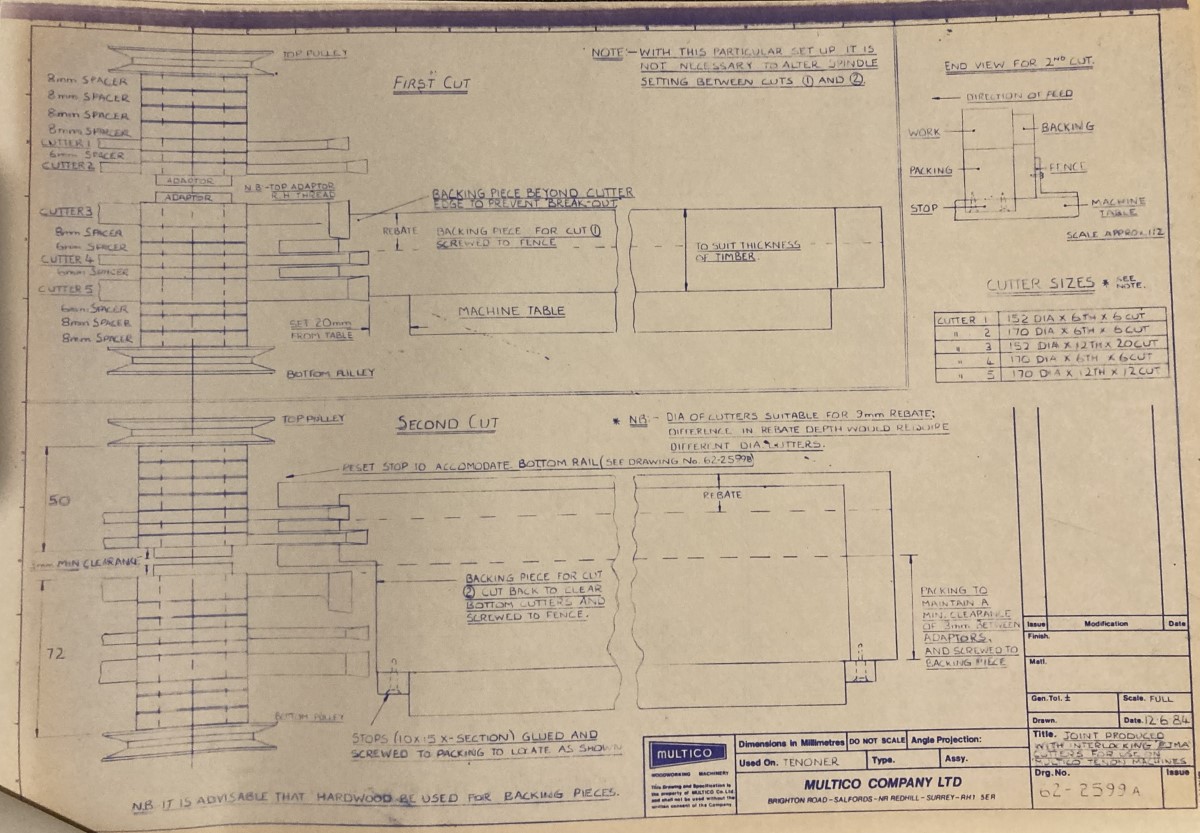 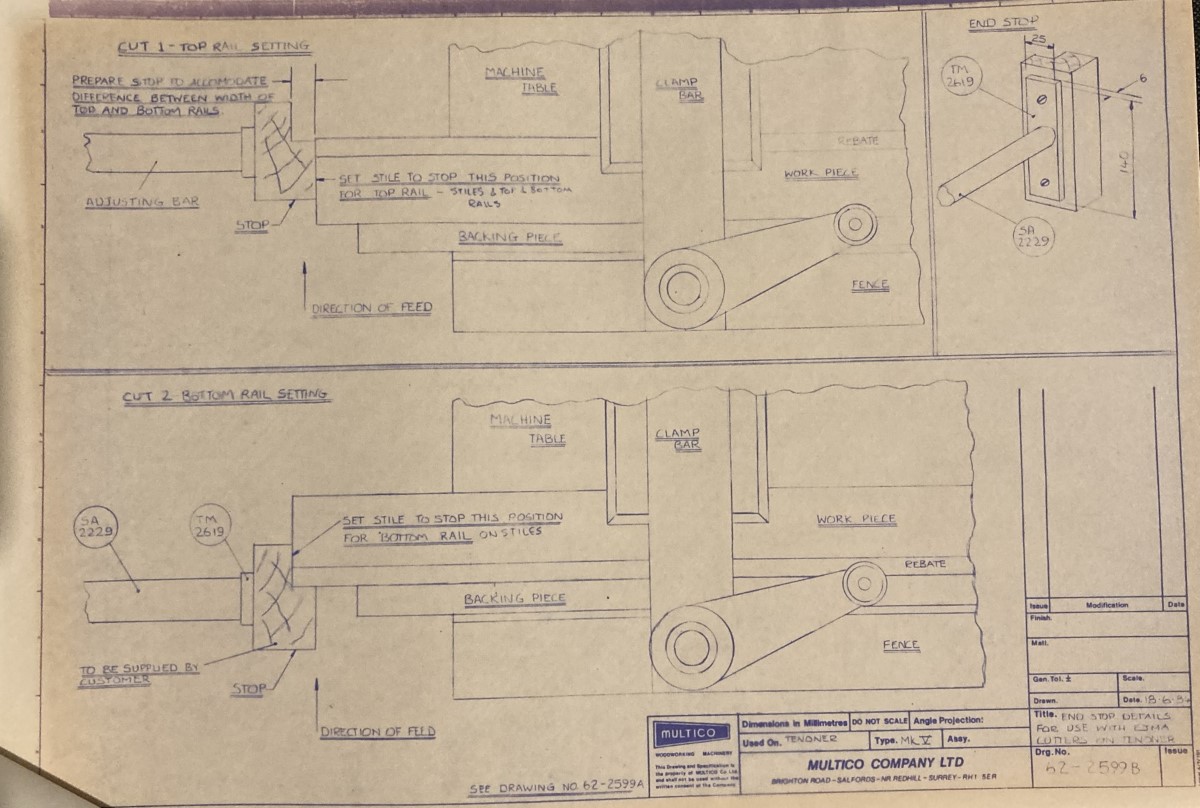 ooooh Where's that from?
J

one of them shows a method of cutting stiles and rails( comb joints)without altering the machine set up. it uses a rebated piece of wood to lift the workpiece so the top cutter is used and the bottom cutter is used in front of the rebated wood. clever stuff.
J

it also seems to accommodate having a deeper bottom rail using a 2 depth stop the difference between the stops being the different thicknesses of the rails. very clever.
A

johnnyb said:
ooooh Where's that from?
Click to expand...

I have a folder full of diagrams for different Multico machines, mostly the later generation “N” machines like the NTA, NS, NTH, etc.
J

what it does is show the potential of such a machine in a production environment. the alterations are fairly straightforward but would allow simple production of the same window frame( regardless of window size)
no mention is made of the casements though. this is all based on single glazing rebates( 13mm)

R
The provenance of machines