Tenon saws (and others)

I'm having a lot of fun building a workbench (Sellers style) and have mortise and tenon joints to make.

I needed to buy a saw for cutting the tenons and thought a tenon saw would be the obvious choice! I'm not ready to commit to buying an expensive one, so thought one of these would get me started: link

There's absolutely nothing wrong with the saw, but I've realised it's a crosscut saw and that I really need a rip tooth pattern for cutting the cheeks. There doesn't seem to be an equivalent saw with a rip tooth pattern. Am I missing something?

Looking ahead to doing more hand cut joints (dovetails etc.), and getting some better quality kit, what is the arsenal of saws I need? Do I need a dovetail saw and both rip and crosscut tenon/carcass saws?

I'm eyeing up the Veritas range as they seem to be good quality without being completely eye wateringly expensive. I'll try to find somewhere I can have a hold of them before I commit though (Axminster didn't seem to have any on display last time I was in...).

you don't necessarily need a dedicated tenon saw, I use a 13 tpi spear and jackson for all tenon sawing and dovetails, it's a cheap vintage one that I simply re-sharpened off ebay, veritas would be very good quality so they are worth what they cost, I have never been unhappy with anything by veritas so far.

That saw is coarse enough to cut perfectly adequately along the grain as a reasonable second-best option. Or, cut your tenon cheeks with a chisel. I'm sure this was standard practise, and it is good chisel practise. Ultimately you will want a rip cut saw with fine teeth (16 to 20 TPI) for dovetails etc (and is perfectly good for cross cutting), and a coarser rip cut tenon saw (say 12 or 14 TPI) for tenon cheeks etc. If you want a third option for cross cutting, then you can add that later, but I reckon anything over about 12 TPI can be filed for a rip cut even if meant for cross cutting.
L

That will do as a first saw. Handle looks uncomfortableThough.
I would go for the longer one.

In the general run of mass market saws, the idea of having separate saws for crosscuts and rips has pretty much disappeared. Instead, you get a compromise tooth pattern like that Axi saw has. I think you'll be fine with it for making your bench and it will have the benefit of being reliably sharp.

It won't be as efficient as separate saws, but that won't matter as you won't be using it all day long. Later on, with your bench built and a lot of practical experience under your belt, you can enjoy using older style tools and sharpening them yourself, but I think you are making a good choice for now.

Two thoughts though - it looks a bit short in the pictures and no length is stated. When you get another saw, you'll probably like it a bit longer.

Also, the heavy brass back on an old saw wasn't just to look good; you really should be able to let the weight of the tool do all the downward force. You don't need to bear down from your wrist.

In the past, I've got round this on a similar saw by folding an offcut of lead flashing along the spine to make it heavier - I think it's worth a try.

I wouldn’t recommend the saw that you have linked, I think for what your looking to do it will cause a lot of frustration.

To cut tenons and Dovetails you only need one saw for most applications. A 12” or 14” tenon saw with around 12~14TPI. There is very little difference in plate thickness between a Tenon and Dovetail saw to make it noticeable for most applications. You need at least 3 teeth in the wood when sawing at all times for a smooth cut, which determine the minimum TPI for a saw. Cutting at an angle increases the number of teeth in the wood and allows a saw with fewer teeth to cut thinner stuff. If your using stuff that’s less than 6mm think then you will need a finer saw, but for most people, that’s a very rare event if ever. (Making joints)

You only need a saw sharpened to RIP, there is no discernible difference in blow out on the back of a piece for a properly sharpened and set saw between a RIP and a cross cut backed saw.

What I recommend to everyone starting out is buy a cheap old saw that you need to sharpen up yourself. You can pop into Axminister tools and have a play with the Veritas, LN, PAX saws to get a feel for what a well sharpened and set saw should cut like. -however, I personally find they all out too much set on the saws.

Have a read of the following thread I made a few years back on the selection, setting and sharpening of a hand saw. I know a few have followed it and all I understand have been successful.

Good advice above. The Veritas saws are good except for the very large 4" one (blade is not stiff enough) and I have a set and use them. They come up used sometimes. Despite that I prefer brass backed but can't put my finger on why.

I agree! I would do it like that.
The bench is joinery.
However the saw the op proposes would be a good, albeit slower, option and a way of gaining experience and muscle memory.

Thanks for all of the helpful replies.

I'd already bought the saw in the link. As I said, it worked fine but it was slow and tedious work cutting the cheeks. I've got half of the tenons left to cut so I might give the chisel technique suggested by Mike G a go.

Deema, thanks for advice and the link to your restoration thread. I do like the sound of bring new life to a good old saw. I've done that with a couple of planes and it gives me a lot of pleasure using them.
N

I agree! I would do it like that.
The bench is joinery.
However the saw the op proposes would be a good, albeit slower, option and a way of gaining experience and muscle memory.

Save nice dovetail saws for fine work.
Click to expand...

Yes, I'm viewing the joint cutting as good practice for future work.
B

NickM, if you are anywhere near GU52 Fleet/Farnborough, I have various different tenon saws you could see/handle.

Bod, I'm really sorry for not replying to this but I only just spotted it. That's a very kind offer which I will certainly keep in mind as I'm not too far away at all (near Basingstoke).

I've actually bought a couple of old saws on ebay and I'm going to have a go at re-cutting the teeth following Deema's excellent thread. Sadly I didn't get them for 99p(!) but they were cheap enough that I won't lose too much sleep if I can't get a decent result. I'm hoping they might arrive this week in which case I'll be visiting Axminster at the weekend to equip myself with files! Wish me luck...
B

Fear not!
The offer wasn't to play with latest and greatest, but to try various older tenon saws, to see what can still be found for very little money, and a bit of what to avoid.
Deema's thread is very good, and shows just what can be done.
Let us know how you get on.

Bod":3imxi4md said:
Fear not!
The offer wasn't to play with latest and greatest, but to try various older tenon saws, to see what can still be found for very little money, and a bit of what to avoid.
Deema's thread is very good, and shows just what can be done.
Let us know how you get on.

So I bought a couple of saws on eBay and, following Deema’s marvellous guide on this forum, had a bash at “restoring” one of them.

The larger saw I bought does actually cut reasonably well so I’m going to leave that one as is for now until I’m more confident.

For now I concentrated on a small saw (10”) which was in a much worse state and really didn’t cut at all - I had much less to lose.

The handle had been quite badly cracked but was glued back together so I left that alone. It was also wobbly but slightly shortening the studs and nipping them up properly sorted that.

I took the back off and cleaned the blade which came up reasonably well with some very fine wet and dry and some autosol polish.

I’m struggling to get all curve out of the blade. I can almost get it there by tensioning (as explained in Deema’s guide) but I’m wondering if the blade/back have a slight bend. I think it’s good enough at the moment.

Onto recutting the teeth... I am embarrassed to put a photo up but I’ll do it anyway! 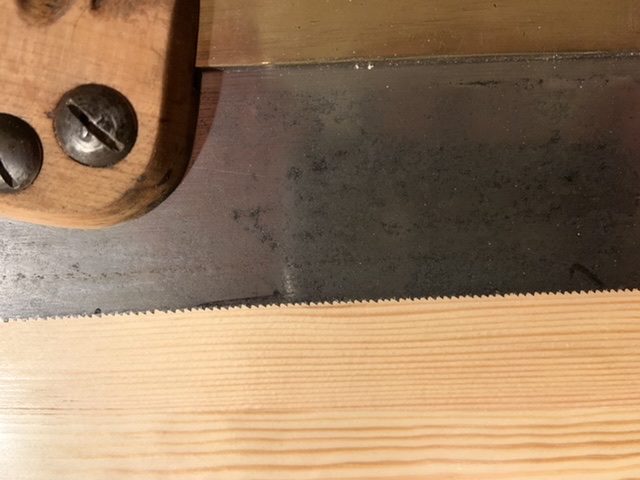 As you can see, there is some general unevenness and one or two horror shows, but overall I was quite pleased that it now has teeth which are sharp! I think I could do a lot better next time, and would perhaps go for a slightly coarser tooth pattern (eg 14 ppi rather than 16) which would make it easier.

It does seem to cut reasonably well, although I think it could do with a little bit more set.

On the subject of setting, I found the “hammer” on my eclipse 77 (fine version) looked “fatter” or blunter than I was expecting and I wonder if it is worn down. I don’t have a photo but will try to take one. If someone could show an example of what they’re supposed to look like that would be great. I felt like it was difficult to be precise with it. Again, I think a slightly coarser pattern would help a bit.

Anyway, overall it was fun to do. I’ll use the saw for a bit and see how it goes but might have another crack at it soon to see if I can get a better result (or might look out for another saw to try on).

All I'd add to the advice you've had from Deema is that I would only ever take the back off if it was absolutely necessary......and that it seldom is.
N

Thanks Mike. The back seemed to be hard down on the saw plate, which was already curved, so taking it off seemed the right thing to do. I also like taking things apart...
N

Presuming that the back plate is no bent, Paul Sellers has a video where he straightened the blade of a tenon saw by bringing the spine of the back plate squarely down onto his bench.

Well done, I find high tooth counts to be harder to get right than any others, you have less chance to adjust any cows and calves. I’m glad you found the thread helpful.

Check the brass back with as straight an edge as you can. If that’s straight, the. By tensioning the blade you will get it straight. Often if it’s not straight the back has been tapped too far down and has bottomed out on the blade. It should actually be protruding above the handle, and most people it down to be level.....which is often bottomed out on the blade.
You must log in or register to reply here.
Share:
Facebook Twitter Reddit Pinterest Tumblr WhatsApp Email Link