Steve's workshop - Painting the outside walls

Exactly. The sides are <1m from the boundary and, in theory, my two neighbours could build in exactly the same way that I am doing, so if they go up, I go up.
The probability is infinitessimal, but that, apparently, is not the point.
S
A

Steve, great WIP and I love you teaching me new words. I think I'd have said teeny-weeny but I do have 5 kids.
B

The BCO is convinced that once all your neighbors figure out you're a woodworker, they'll all want to become woodworkers too. There'll be sheds springing up in every garden. See what you've started ?

It's coming along very nicely, Steve.

What are you going to do to enclose the underside of the roof overhangs? Do you have birds trying to get in to roost out of the rain?

Well a pleasant surprise today, Ray could come after all. So we have been putting up more of the ceiling. As usual, Ray was up top whilst I cut insulation and OSB. The insulation smells of fish. Yes really.

The slopey bits of the ceiling are about 1.5m, so we need a board and a quarter. 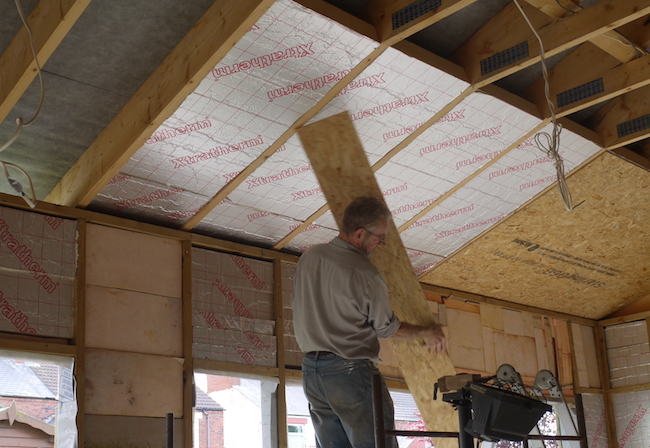 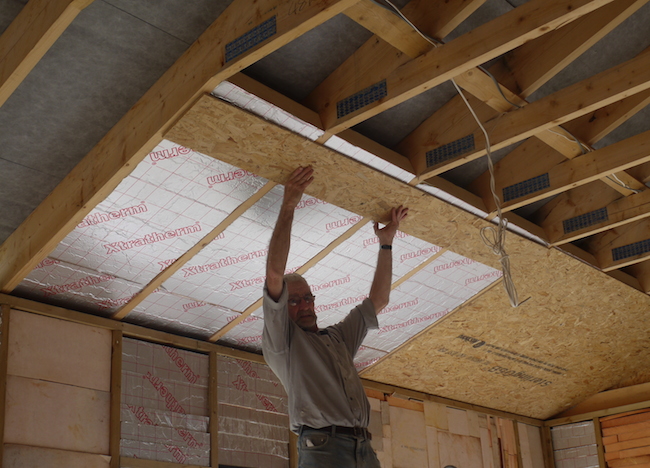 I think Ray would prefer it if I handed him the Paslode rather than fanny about with a camera. 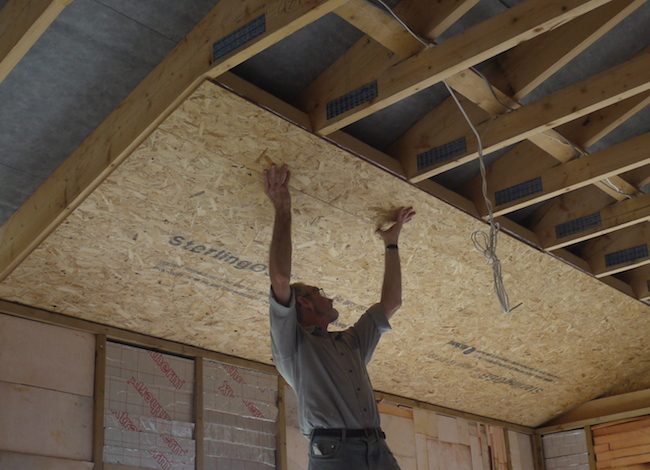 One of the trusses is a bit skew-wiff, so we had to taper the ends of two boards so that the joint line stayed on the truss for fixing, but they marry well you would never know to look at it.

We didn't quite get it all finished, there is one more set of trusses to board, but we have made good progress.

Now I have to do some clearing up and reorganising this weekend, as I have 45 sheets of plasterboard arriving on Tuesday.

To late for you then, however for others who need plasterboard for regs, but want to be able to screw stuff easily, I used formacell in my house. More expensive however will take a wood screw with no plugs, no problem. Also has better noise dampening quality.

Sent from my GT-I9100 using Tapatalk

I'm not planning to screw very much directly to the wall, and if I do I shall do it at stud partitions, but I shall have a French Cleat around the room and hang tool BOARDS etc. off that. I did that at my last place and it worked well.
S
W

Steve Maskery":rzt67a5z said:
but I shall have a French Cleat around the room and hang tool boars etc. off that.
Click to expand...

I have come across tool bores, but hanging them would be going a bit too far. Are these a different species? :wink:

God I'm knackered.
The day didn't start well. My Mac refused to boot because I'd got it too damp yesterday when I used a foam cleaner to clean it. It's a bit better now but half the keys still don't work. I'm typing this with an on-screen keyboard. It is very tedious. I hope it sorts itself out.

Anyway, I was expecting 45 boards today and a lorry turned up at 8.30, but there were only 28. The rest are coming tomorrow, apparently. I was a bit miffed because no-one had said anything about that, but right now I'm delighted.

We started carrying them between two of us. Of course, Ray could manage one under each arm , one in his teeth whilst balancing a fourth on his head, but we mere mortals struggled a bit. These are 3m boards, 15mm thick and it was blowing a gale. So Ray did something else, I forget what, whilst Terry, Julian and I carried them down, in between the very heavy showers. Even with 3 of us they were quite heavy enough.

Tomorrow there will be just Ray and me

Anyway this what we have achieved. 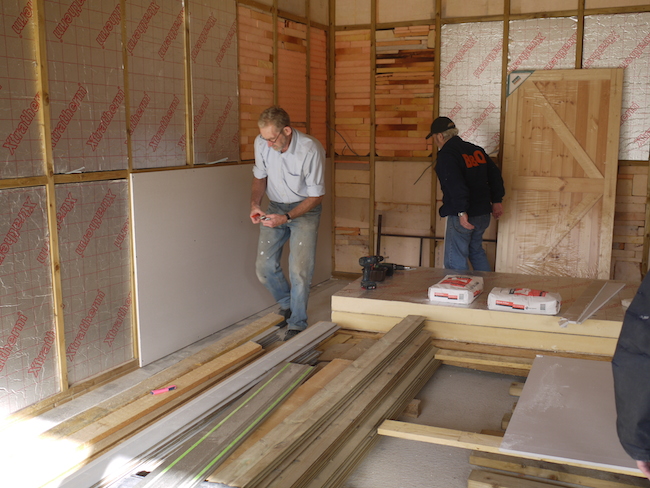 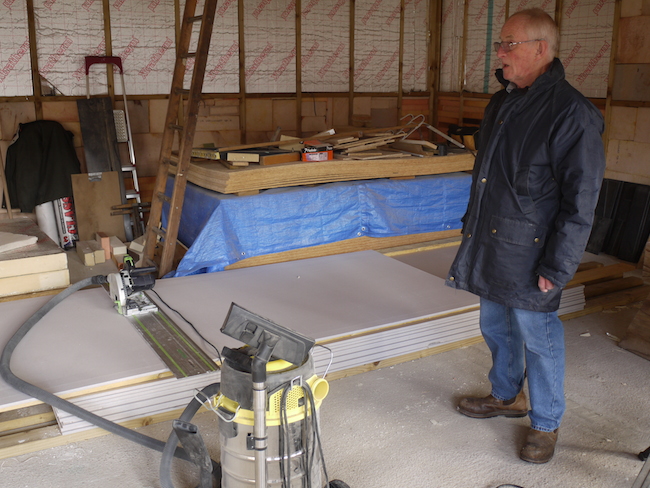 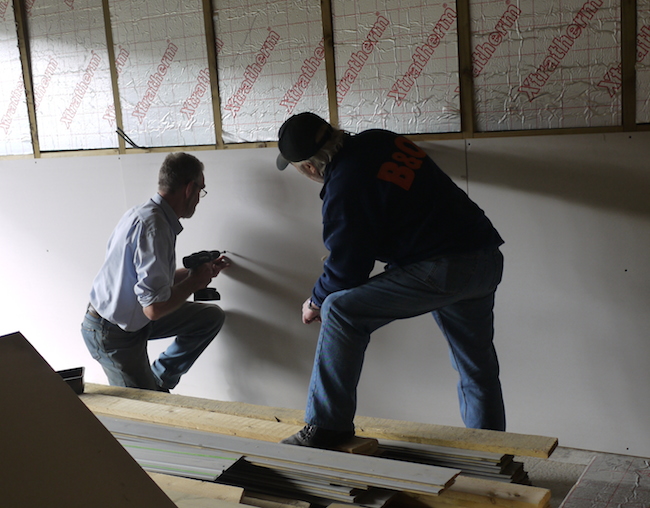 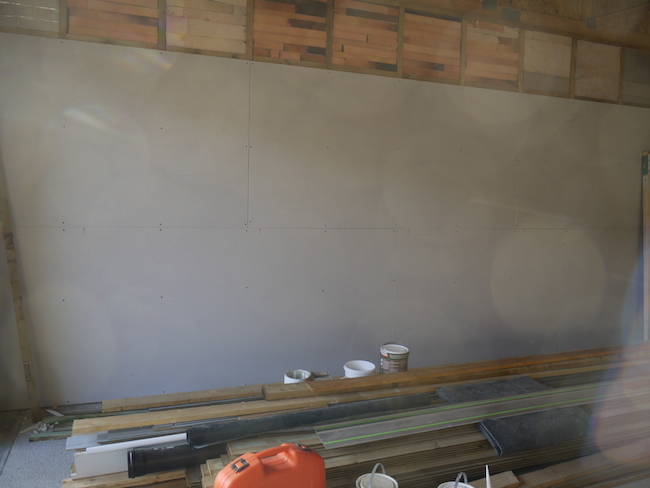 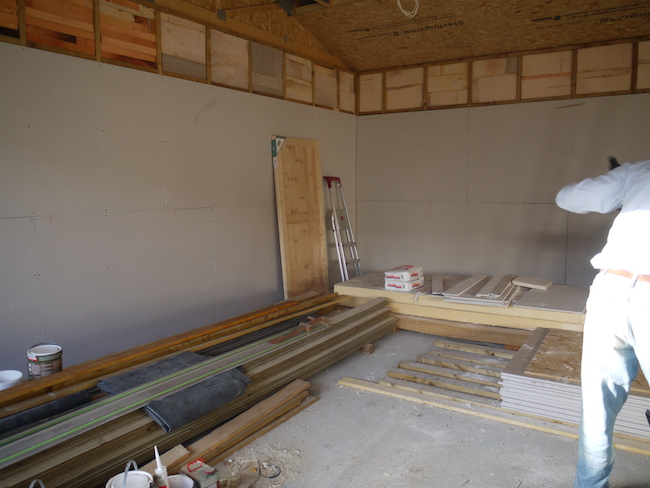 This is all the waste we have and the larger pieces will fit by the doors. 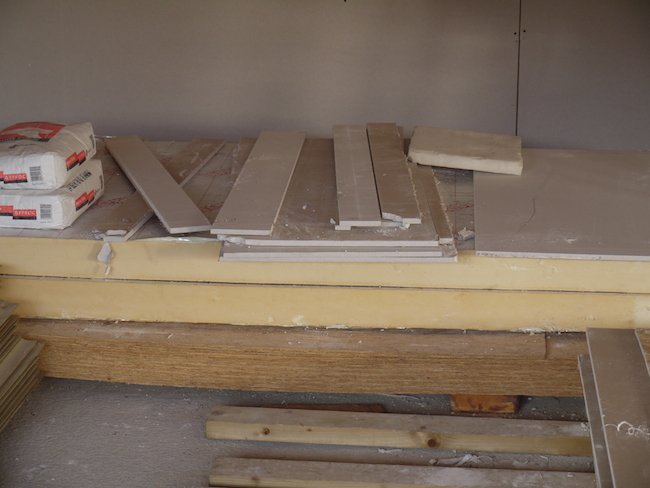 The only casualty today was my shirt. I snagged it on the fence and ripped the sleeve It's an old shirt but my favourite. My sartorial elegance has been compromised.

I hope my keyboard recovers, this is a right pain in the nethers. No space bar, comma, backspace or return key, amongst others. I did put it in the oven as low as it would go for a couple of hours. I think it might need a bit longer.

Steve Maskery":adpsln6v said:
I did put it in the oven as low as it would go for a couple of hours.
Click to expand...

Steve - if you are still having trouble with your keyboard, try a hairdryer on it and DON'T PUT IT IN THE OVEN AGAIN !!

Hairdryer, medium heat, fast as you can - the warm airflow should dry the contacts - I have done this successfully many times before

dm65":1hm8lzit said:
I have done this successfully many times before
Click to expand...

dm65":oyj9muno said:
I have done this successfully many times before
Click to expand...

Another good way of getting moisture out of electronics is to put them in a bowl of rice. I have resurrected a couple of mobile phones and an aluminium iMac keyboard using this technique.

Airing cupboard is the best I have found for wet electronics.

Space bar not fixed yet then? :lol:

This morning started beautifully, so Ithought great, we'll be moving plasterboard in the dry. Except that it didnt arrive until 1 by which time it was raining.

They've delivered pink fire graded board because it was all they had in that size.

So this morning we did more boarding .... 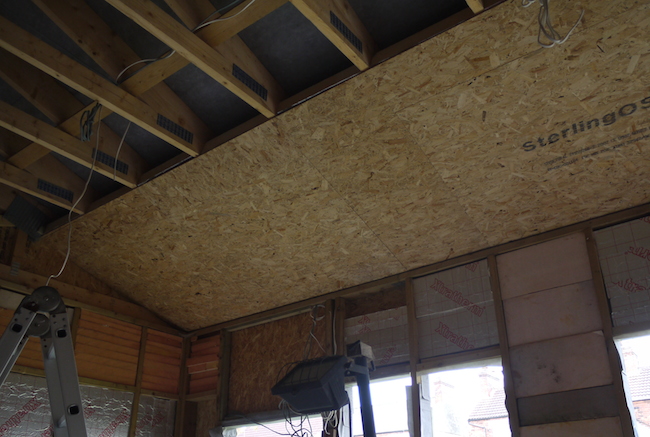 I discovered I have a very wonky stud. The panel edge is vertical... 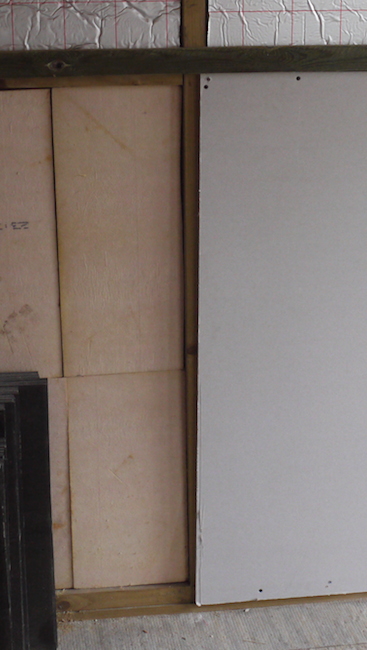 and this afternoon we carried 18 sheets down. My mate Stuart has lent me a trolley, to which we have screwed a couple of battens but although it was easier on the back I think Ray thought it was more trouble than it was worth. 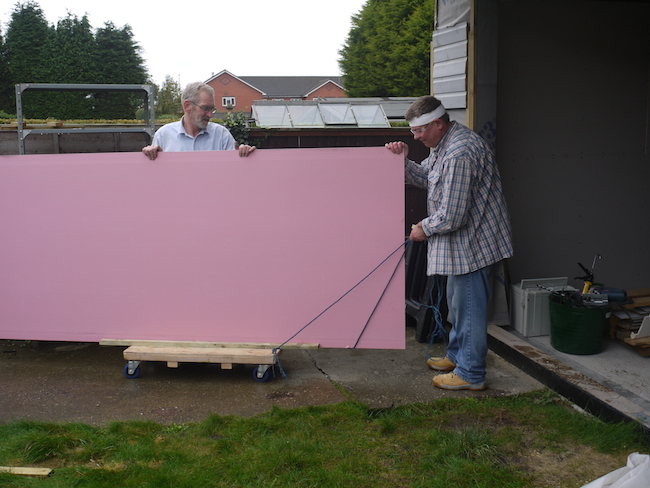 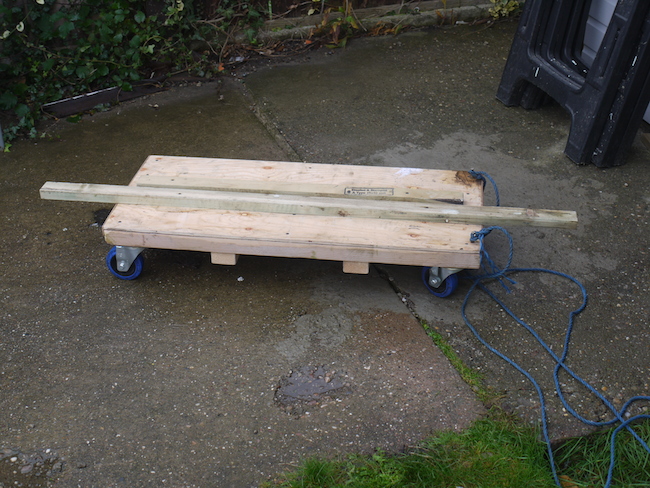 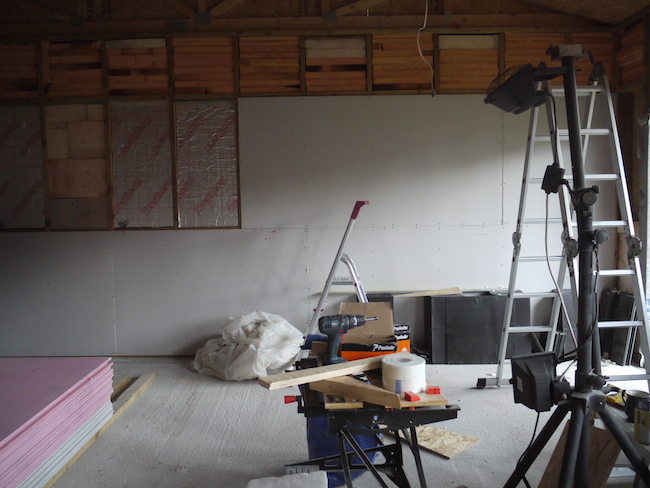 Now I need to buy a panel lifter.

That panel lifter Steve linked to looks good. Buy it, use it for as long as it takes to get the stuff on the walls and ceiling and sell it afterward. Someone else will be glad to get a gently used lifter for the price and it'll cost you less money than a week of hiring one.

As for your wonky stud, nail a scrap in down at the bottom and it'll all come out T.B.

Ray's just rung.
"Have you ordered a lifter?"
"Not yet"
"Don't bother, we can have one on loan for as long as we need".