Steve's workshop - Painting the outside walls

Halo Jones":3mvdww8c said:
We know your reasons but I am itching to say leave that open top row as windows!

Yes, that's what came immediately to my mind... But then I thought "got to clean the panes every so often..."

I wish I could go there and take a look at the real thing, it is becoming fantastic.
D

Looking fantastic, Steve!! What a great comeback! But...Er... aren't we getting a tad beyond workshop "essentials" here? More like "Workshop Quintessentials" it would seem. So I guess that will inspire a whole new line of super jigs?
R

Hi Steve
Its starting to look good. Have you thought about adding a wet underfloor heating system to add to your comfort? This can be powered by a a small Trianco type electric heater. I did mine well worth the effort, and < than a grand, pity about some of my kids inheritance

I was having a little email exchange with DaveR in Minnesota last night. He said he was jealous of my workshop size.

That's it, I've made it, life is complete. I've made an American jealous of shop size. I have nothing left to achieve.


I must admit I do like the clerestory windows idea. I think I'd need a variation from planning, though. And they are not visible from the house and all that.
S
S

Steve, are you thinking about heating at all, I have a more modest workshop my self and added two small oil filed rads that I leave on the low setting during the winter, made a huge difference to working during the winter months ( I am a hobbiest so mainly weekends) especially with condensation. When I went in all I had to do was turn on the blow heater for a bit and nice and warm....

Well my original idea was to have a nice woodstove in there. Very trad, very romantic etc. But the building is wooden, so there are risks there.

It will be very well-insulated, so I think I'll just see what it's like before I decide.

Underfloor heating is attractive but could be very expensive to run. I don't want it toasty any more than I want it chilly so I think I'll just suck it and see.

That looks fantastic Steve its suddenly moved forwards no end, should be only days before the opening ceremony, will the queen be doing the opening?

Looking terrific; I'm a little surprised it's 'only' 8 x 8m - looks bigger! Must be the height
S

Well done Steve,
With regard to heating, they do make wood burners for boats which should be safe enough for you.
Slinger
B

Slinger":1vzjekmq said:
Well done Steve,
With regard to heating, they do make wood burners for boats which should be safe enough for you.
Slinger
Click to expand...

Use a wood stove with a back boiler, you can have radiators running from it, correctly done, no pump, or electricity is needed.
This is a common way of heating narrow boats, stove at front of boat, rads down the length, even a hot water tank is possible.
It is well known for boat stoves to be lit in October, and not put out till April, attended only 2-3 times a day. (a skilled to be learnt only on your particular stove, they are all different to keep in.)
Search "Morso Squirrel" not the cheapest, but it will show the possiblities.

I see adverts for stoves for burning everything from shavings to table saw dust safely and efficiently in BW all the time.

I would have got one if I could have put a chimney in. I am sure they are going to be safe.
G

So, about 58m2 internal??? You may even put in a billiards table and a bar for the breaks!

Steve it is looking good. Two points
Windows to rear yes you should make them windows you will not get much direct sun light in given the overhang on the roof
Wood burner I bought some 3x2 paving slabs and stood the wood burner on one (two would have been better) and upended a few against the wall thus reducing the risk of burning down the building. I fitted fire board around the flue as it goes through the roof.

My workshop is quite well insulated but not as well as yours will be, and it preforms as you would expect. heat is retained well and cold does not penetrate that quickly. but there are 24 hours in a day and if its subzero then it will eventually be the same inside, so heat is required and it needs to get up quickly. i use a wood burning stove its fine and use a fan to distribute. if i replaced it i would go one size up on the heat requirement for the space as it spends most of its time in the mid range of its output .Also there good for sawdust.
Having just had PV panels on the house i am impressed with there output and the bill reduction so underfloor heat might be ok but it will be a slow responder.

I note PAC 1 comments and did the same, greatest danger is hot stuff falling on floor and radiation on full out put. A relative who is a fire prevention consultant passed it as OK and i have had no problems .The cheap flu (galv.light metal) will not last.

"if i replaced it i would go one size up on the heat requirement for the space as it spends most of its time in the mid range of its output." OLD

When I got my first stove I was advised to work out what size was needed for the space, inc. calcs. for windows, external walls, etc. - and then buy one slightly smaller. It made sense because it's unusual to need the absolute maximum, and burning them hot is more fuel efficient and keeps everything soot free. It proved to be sound advice.
D

Agree about going one size down from the maximum heat requirement. Guy who had our house built put in a dirty great Vermont castings stove with an output about 20% over the max for the house. it was a total pain - took ages to heat all the cast iron and was running at half output most of the time, so wasted fuel like crazy. We now have a Squirrel!

Another possibility for Steve is to combine underfloor wet heating with solar thermal panels. The heat storage in the floor slab will even out temperature nicely, and practically nil cost to run. But of course you need to make sure the insulation between floor and subsoil is good, or you are just warming the worms . Ask Mike Garnham of this forum for advice.

Ray is coming tomorrow and it may well be the only day this week we can both make it, so I really want to try to get the roof rain-tight. There are two more lengths of membrane to install, so that should not take very long, but I'd also like to get the barge-boards up. The barge-boards support the ends of the laths as well as finishing off the roof ends nicely.

I couldn't decide whether to paint them black or white, so ended up tossing a virtual coin. White won. Everyone recommends Sadolin, so this morning I bought 2.5L of Superdec White Gloss. Almost £40. Ouch.

I have to say I was disappointed. Now it may be unfair, given that it is a 2-coat product and the tin didn't even cover the wood I'd got in 1 coat, but as it dried the colour just disappeared.

So this afternoon I went a bit further to a store I've used before and been very happy with and bought 5L of what I believe to be an equivalent product for less than half the price of the Sadolin. It's Johnstone's Opaque Quick Dry Opaque Wood Finish. I've used Johnstone's stuff a lot and rate it highly, so I'm willing to take a punt. It went on in a way in which was indistinguishable and I was very happy with the opacity. Everything has had just one coat, the second coat will be done when it is installed, but the less time I have to spend up a ladder, the happier I will be.

Here are a few pictures. I'm sorry it's not more exciting - it's a bit like watching paint dry...

First I mitred the top ends of some 6x1. The saw has a scale with several calibrations on it. Not just degrees but Twelfths as well. My roof line is 17.8 degrees, which is very close to 4 in 12. 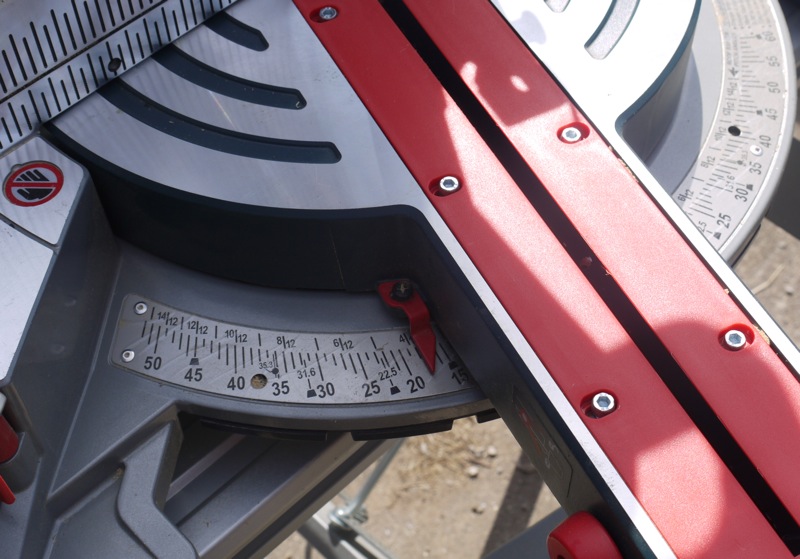 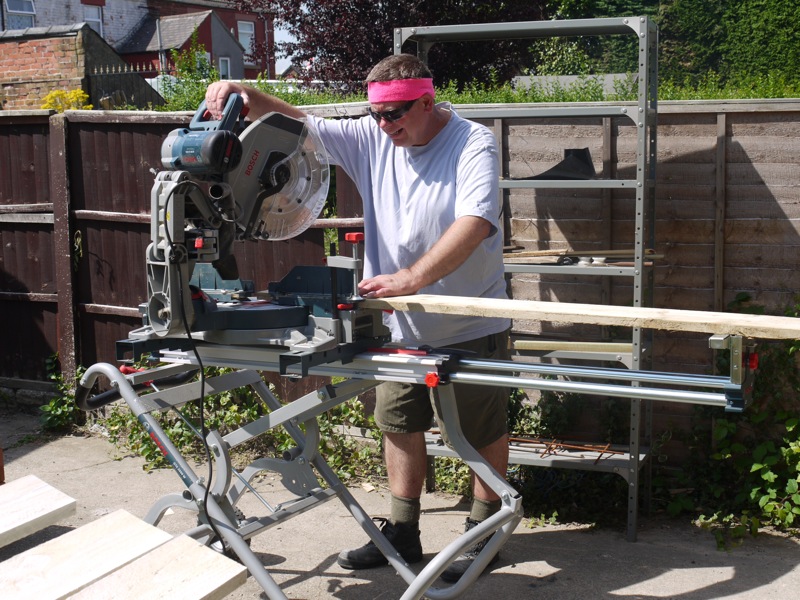 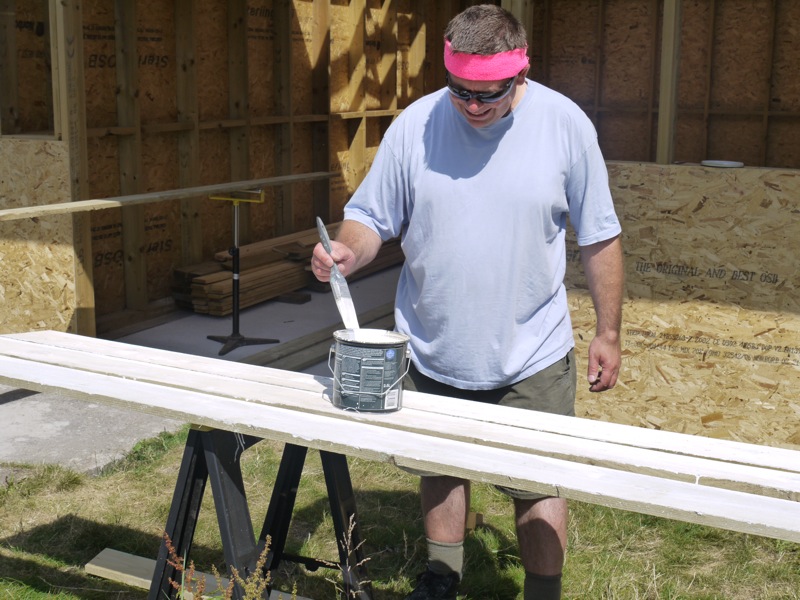 Half an hour later it was as wimpish as a wimp in Wimpland. 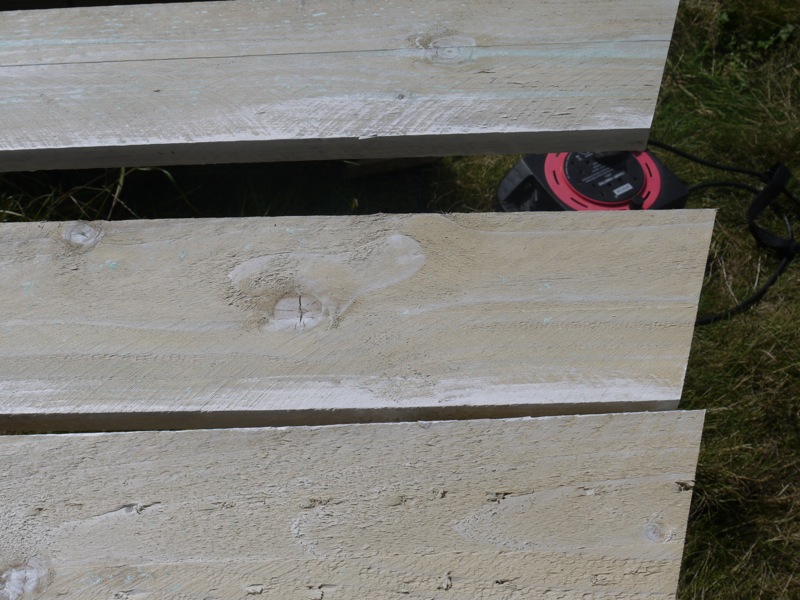 But I just kept going. I guess I've painted about 3.5L today on mainly rough-sawn timber. It doesn't seem to go very far. I hope I've made the right choice. 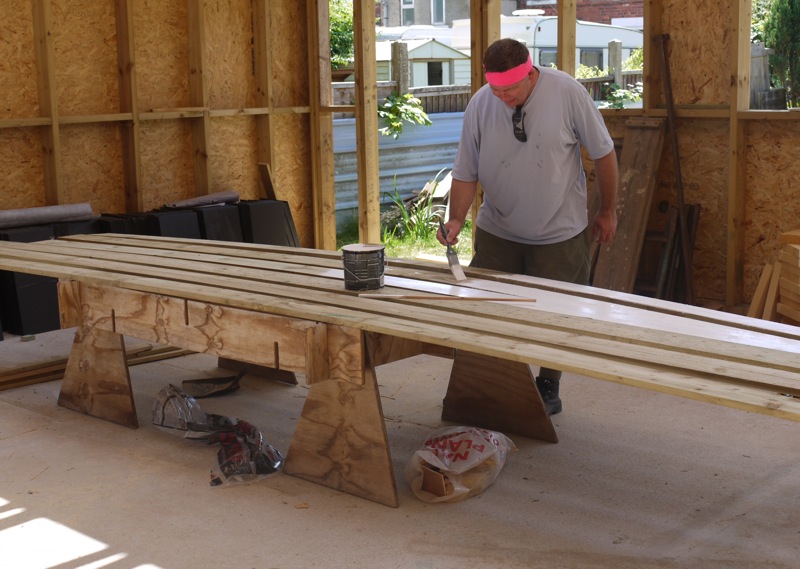