I've bought a floor standing Startrite mercury drill couple of days ago for £150 without doing much research , foolishly I didn't check carefully how true it runs , it looked ok to the naked eye. there is no sideways play.

Brought it home and I read few threads and learned this model has an issue with bending the quill easily so I checked with my right angle to see if it runs true , I tried it with a 12mm drill bit and from what I can see there is a about .5mm-1mm ( just a guess from naked eye) wobble ( untrue ? not sure about the technical term) at the tip of the drill bit when fully extended. when it's in operation I can see the slight wobble without the right angle as well

Assuming the drill bit is fully straight Is this acceptable? I'm only using it for DIY/hobby work where mostly drilling wood and thin metals in my diy projects, I read in few threads it's acceptable to have some wobble so just checking if this is ok. I've ordered good quality drill bits to check again and make sure.

Just asking for my peace of mind , I can't return it but just want to know so I can make peace with myself knowing I made a mistake or not.

If it's not good then I don't feel like selling it back without disclosing the issue but if I disclose then I probably will get next to nothing resale value so I'll just learn from my mistake and move on.

That much runout (wobble) could make some difference but doesn't make it useless. It may just need some tightening up at the nose - there is usually an adjustable clamp there to allow for some wear. No doubt a Mercury expert will be along soon to tell you more.

But I note that spares are available at what look like fair prices, at https://www.machinespares.net/products/ ... y-5-speed/ so it may not be too expensive to do a good restoration, especially if you got it cheaply.

Thanks MusicMan , that's good to hear, what does it mean when you say nose in a pillar drill? sorry new to these terms as this is my first pillar drill.

I've checked machinespares prices , that's an option but since I already paid £150 for the drill best invest in something else which can be cost effective int he long term.

I’d do a few checks before giving up on the drill, they are good drills, working better than anything new at that kind of price by a loooong way.

You will need a clock and a stand......if you don’t have one you will need one to check any drill going forward. They aren’t that expensive to buy secondhand off an auction site.

First grab hold of the chuck and give it a good tug, if it moves sideways you’ve probably got worn bearings. That’s an easy fix, bearings aren’t very expensive. Usually due to the drill being used as a wire brush / sander etc.

If it doesn’t have any movement check the chuck is running true by clocking the outside. It could be the chuck teeth have been gnarled up. New chuck would be the answer if it’s running true, again not too expensive.

If the chuck isn’t running true, remove the chuck (a couple of chuck wedges are best, the two collars are supposed to allow you to take off the chuck but I’ve never been able to do it) the chuck is mounted on a Jacobs male taper.....so be careful removing it. Check the make taper hasn’t been abused.....if it has it’s not worth trying to fix. If it hasn’t check the runout on the taper. If it’s good, clean the inside of the chuck and reassemble. (It could be a cheap chuck which needs replacing if it still has significant run out)

If the taper isn’t running true it’s probably a bent quill......move on to next drill!
M

By the 'nose' I meant the bottom static part of the drill head. The bit the quill (the bit that moves up and down) comes out of.

If you spent £100 on parts on top of what you paid, you'd still have a very good drill at a good price.

As said it could be the chuck. Worth discovering what is wobbling.

Thanks for suggestions guys, I quickly tested the runout on the outside of the chuck this morning , will do further tests later on over the weekend.

So at the tip of the chuck I get 0.003 Inches (0.0762 mm) runout, this is when the chuck is in fully extracted position, I assume this is good news (or not so bad news considering it's only used for diy use) ?

That’s probably the accuracy of the chuck body! I don’t believe you can drill to that accuracy without reaming; so, you’ve got an excellent drill. Probably a bent drill or accumulated crud within the chuck / worn chuck jaws.

I’d buy the appropriate set of chuck wedges, take off the chuck and either replace or service. You can take apart Jacobs chucks. The taper will be in the side if the chuck. I’ve attached a link to where I’ve bought chuck wedges from before.

Thanks very much for responses, I'm so glad to hear my blind buy turned out to be a good drill. But lesson learned to do more research and testing before I buy a drill next time.

I followed this thread with interest as I've bee thinking of upgrading from my Chinese SIP job.
Lo and behold this one was coming up at an auction in Cheltenham:- 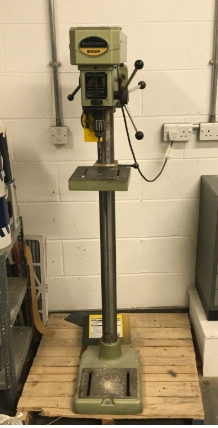 Dashed in yesterday to have a look - a really nice clean machine. Being sold because the art gallery had closed down its workshop.
Had a go at the online auction today, but it went beyond my budget. The winner got it for about £300 including VAT and buyers premium. So, Jimmy, it sounds as though you got a good buy there.
Regards
Brian

Hi , I've read through this thread with great interest - I need to remove the chuck from my newly obtained Startrite Merury as it is pretty worn and sticks, getting it to tighten/loosen smoothly is the problem and drill runout. The difficutly is getting the old one off....I have tried using the bottom collar to drive the chuck off to no avail so I guess the way to do it is with wedges - my question is what size wedges do I need? I have never used them before so don't want to cause any damage. Thanks, Jim

Jim P said:
Hi , I've read through this thread with great interest - I need to remove the chuck from my newly obtained Startrite Merury as it is pretty worn and sticks, getting it to tighten/loosen smoothly is the problem and drill runout. The difficutly is getting the old one off....I have tried using the bottom collar to drive the chuck off to no avail so I guess the way to do it is with wedges - my question is what size wedges do I need? I have never used them before so don't want to cause any damage. Thanks, Jim
Click to expand...

Do you have the 2 C-spanners required to grip the knurled collars? If not I've got a pair and I'm not far from Glos. Answer here and, if need be, I'll get in touch with you.
Lots of info on the drill here.
Brian
J

Thanks, and no I don't that is a big part of the problem I suspect!! I saw the lathes site, v useful. Also there is a company in Dudley that specialises in them and can supply spares. At a price!

If I could borrow them that would be fantastic

I finally got it off this morning, with the aid of my trusty angle grinder....I cut the outer collar away, then the jaws and finally cut into the main body to close to the shaft then in with a small cold chisel - that opened it up and off it popped. I cannot believe how tight it was. No shaft damage thankfully, checked the shaft in the lathe - max 2 thou runout from splined end to the other at the taper so good enough!

And the good news - it's all gone back together now with new bearings, smooth as silk again. The chuck from my lathe is the same taper so I can swap back and forth v easily.