I've been making a lot of chisels lately, which means my shop would need an hour or two of clean up and blow-out to get the metal dust off of everything. The bench would need a scrape and sand, but for some reason, last week, I got a jones for a type 20 planes. Here's the claim to fame for types 20:
* beech knob and handle of slightly more awkward shape
* coarsely made frog (which turns out to be fine)_
* thin iron that is also generally soft (new stanleys don't suffer from this - fortunately, the unicorn actually saves this by removing the apex that causes trouble with softness and now this iron can freely plane cocobolo, even if it has silica in it). The blessing is that the softer irons are super easy to maintain on one stone and a buffer. and if desirable, they could be maintained entirely on that stone (I still grind them).
* iffy sole flatness (true of all little used stanleys, though

I paid an abhorrent price for this plane (But still far cheaper than it was to harvest an older pristine record 8 and i. sorby 7 from England) due to the rise of all things tool prices, received it, and was delighted with the fact that it was almost dead flat from front to back.

It's dirty as received, but the iron hasn't been ground that I can tell and it was never flattened (no sharpening marks on the back of the iron).

I decided I would improve the flatness, anyway - I have the means and when something is close to flat already, it's little work.
...

...well, I was wrong there. What I didn't check was the fact that it's about 4 or 5 thousandths hollow left to right. This is unusual, but industrial folks could probably say why. There was nothing off in flatness end to end more than a couple of thousandths. So one direction is about 3 inches, the other is 18, and the small one has the big error. The casting is also hard.

It took me about 30 minutes of fairly heavy back and forth with a file and about $1 of sandpaper to check as a reference, and I just left it kind of skunky looking on the bottom rather than backing off on the filing.

The other issue is my filthy bench has grit all over it and i'm sure there's shellac somewhere, so my very flat reference to lay glass on isn't there - it's close, but even some finish in a blob that you miss, or a large piece of grit will knock the reference glass flatness off. But this is a type 20 - and I have a starrett edge. So Job done.

The theory with soft irons (From knife durability tests) is that material removal is really only about 75-80% of harder irons of the same type. It seems when you use an iron like this (this parallels the round top irons in smaller planes of the type and is just as soft), it lasts perhaps a quarter as long. That's trouble with the apex. The buffer really makes an iron like this shine - it's nothing at all to sharpen and then suddenly it holds its edge and you may end up preferring it.

The picture of the shaving is just the first edge - india and then 5 micron compound in the buff. No other stones, nothing expensive. Cherry - much more is available (even the india cuts this soft iron briskly and deeply, so the edge quality suffers a little bit).

The story ends the same every time, though - about 35 minutes total (prepping the cap iron, the iron and tightening the screws is an afterthought), and the first surface left on a cherry edge is suitable for reflecting clear images.

(picture of the shaving, the sole of the plane left less pretty than normal- but very flat - draw filing pins metal here and there and thus the scuffs, exacerbated by marking with blue dykem, and then the wood from this shaving)

Extremely pleasant "inferior" plane to use. 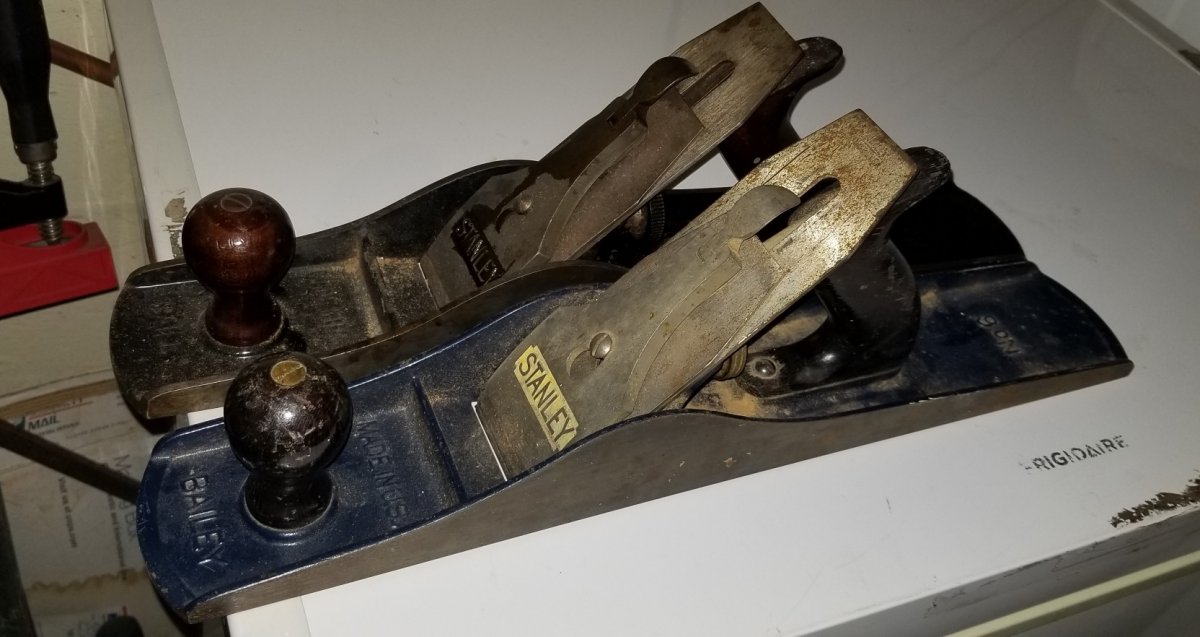 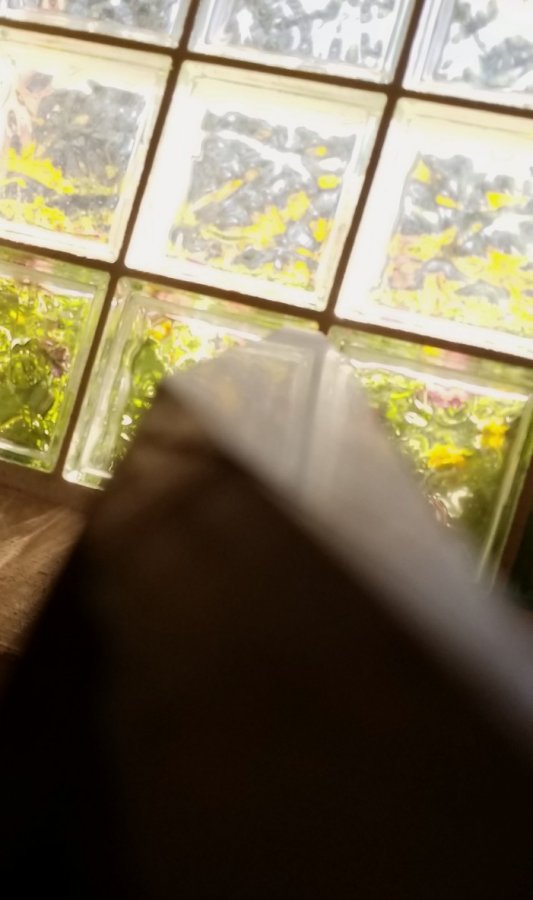 party tip for anyone who ever wants to use dykem or something common for the sole of a plane (using a marker here would be a bear with all of the dry dust, etc, and the large size). You just slather the marking fluid on the sole of the plane and then turn on your vacuum and position the plane behind the vac. exhaust or even hold the hose over it. Instead of waiting a couple of minutes for it to dry, it's dry in seconds.

(plane in the back above is another rubber-adjuster-wheel 6 that I found elsewhere for $25 back in the days when patrick's B&G told everyone 6s were usless. In reality, they're a "better than a panel infill" plane of the same type. I've had a lot of panel infills and may still build a few going forward, but the 6 is far more balanced and far more productive).

Weight of these two about 6 3/4 lbs. You wouldn't want them any heavier (though some of the LN copies are probably pushing 8 pounds. A norris no 13 15 1/2 inch panel plane that I have is nearing 8 1/2 and it's a bruiser - nose heavy man killer)
J

Fascinating. I have never come across the expression "a Jones for" before. Had to look it up. I guess I had a sheltered upbringing.
D

I think it was property of the older folks (the term "jones"), but it's been taken over by some of the younger folks now. I've never looked up the definition before - dictionary claims that it's especially accurate in ref to addiction, but I don't know addicts and hear it plenty, anyway.

"jonesing for chinese food" is the kind of thing you might hear here.
D

not many people are jonesing for stanley type 20s, but the influx of people watching youtube and buying tools is so strong now that I think pretty much anything will sell. The absolute junk will sell for what the more desirable types used to sell for, and at least for a bit ,the common stuff like a stanley 4 was pushing 3 figures if clean.

Not more than 6-8 years ago, there were plenty who lamented that $40 was too much "compared to what they cost on the ground".Apps and ebay have made what's "on the ground" fairly thin. The place for deals, I guess, is widows who suddenly have a giant pile of stuff and no need for money (not my bag to go looking for that - plenty of dealers who will do it).
T

Shoulda sent it up my way, Dave, I woulda had one of my guys put it on my big surface grinder!

I have a #6, but it rarely gets used. For the stuff I do (mainly joinery) it always seems to sit uncomfortably between the handier #5-1/2 and the girt great #7. What do you use it for? I'm just curious

I'm in complete agreement with your comments about infill panel planes. Hans Brunner once sold me a 22-1/2in Norris A1. Looked beautiful but the weight and size made it, in effect, a boat anchor, because it was too damned heavy.
D

But I don't use one much as it's hard to find a case in most woods where it works better than a wooden plane (if you're not prepping wood with a planer and jointer).

I don't have a good feel for how much the larger metal planes from stanley were ever used other than little bits here and there. It's not common to come across a jointer that's worn out, but you can from time to time find one that looks like it was stuck in some kind of fixture and then worn out.