Well I suppose most of you are thinking quite the opposite!
and are welcome to share their thoughts, but it seems not a bad solution should one feel like splurging on something for themselves.
Bought this just after Christmas at something like 88 quid in euros.

I bought this as I have a bandsaw which I want to setup, and this old aluminium beam was a small bit questionable for the job. mainly concerns about twist. 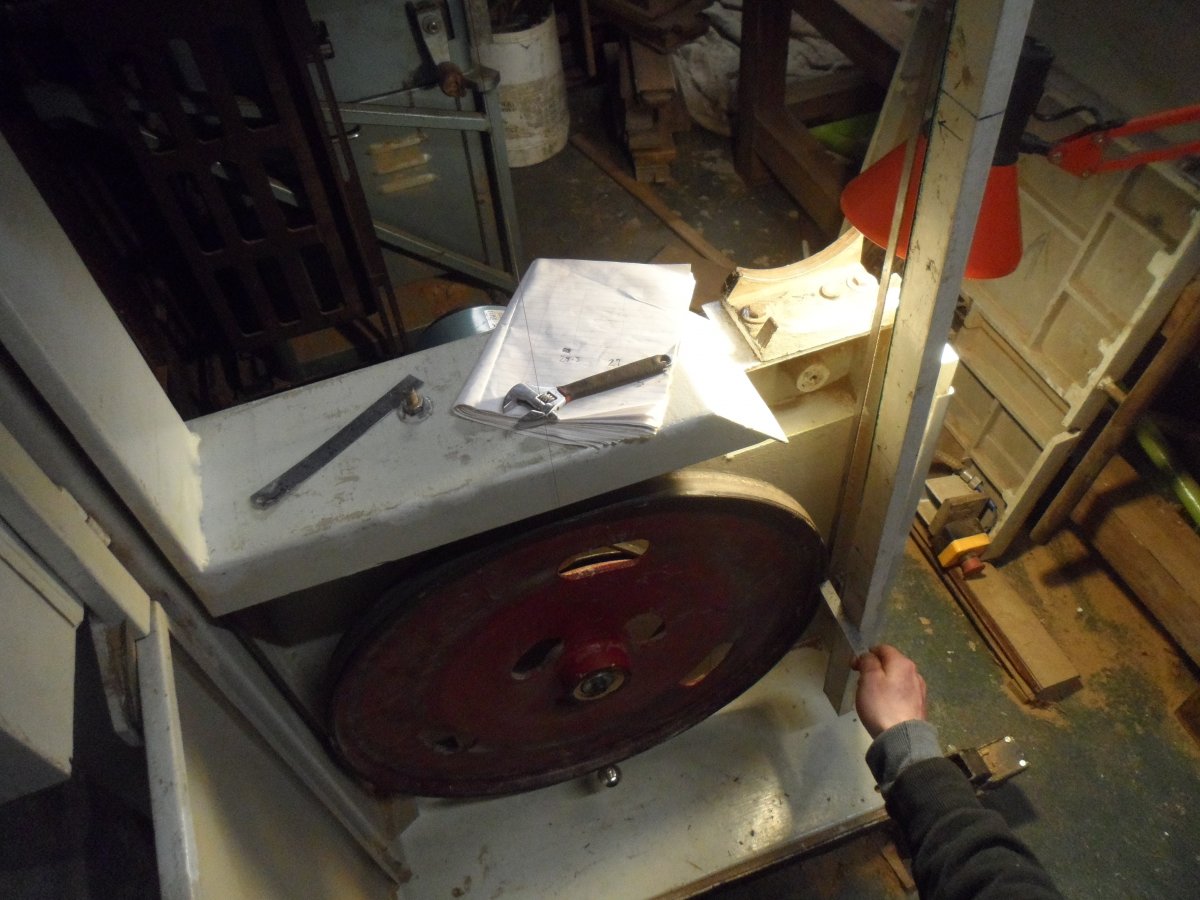 Smoothing over the sharpish edge of this old square to prep the benchtop
I done the corners not so long ago, obviously didn't foul the long edges of this useful mini blued steel straight edge tool. 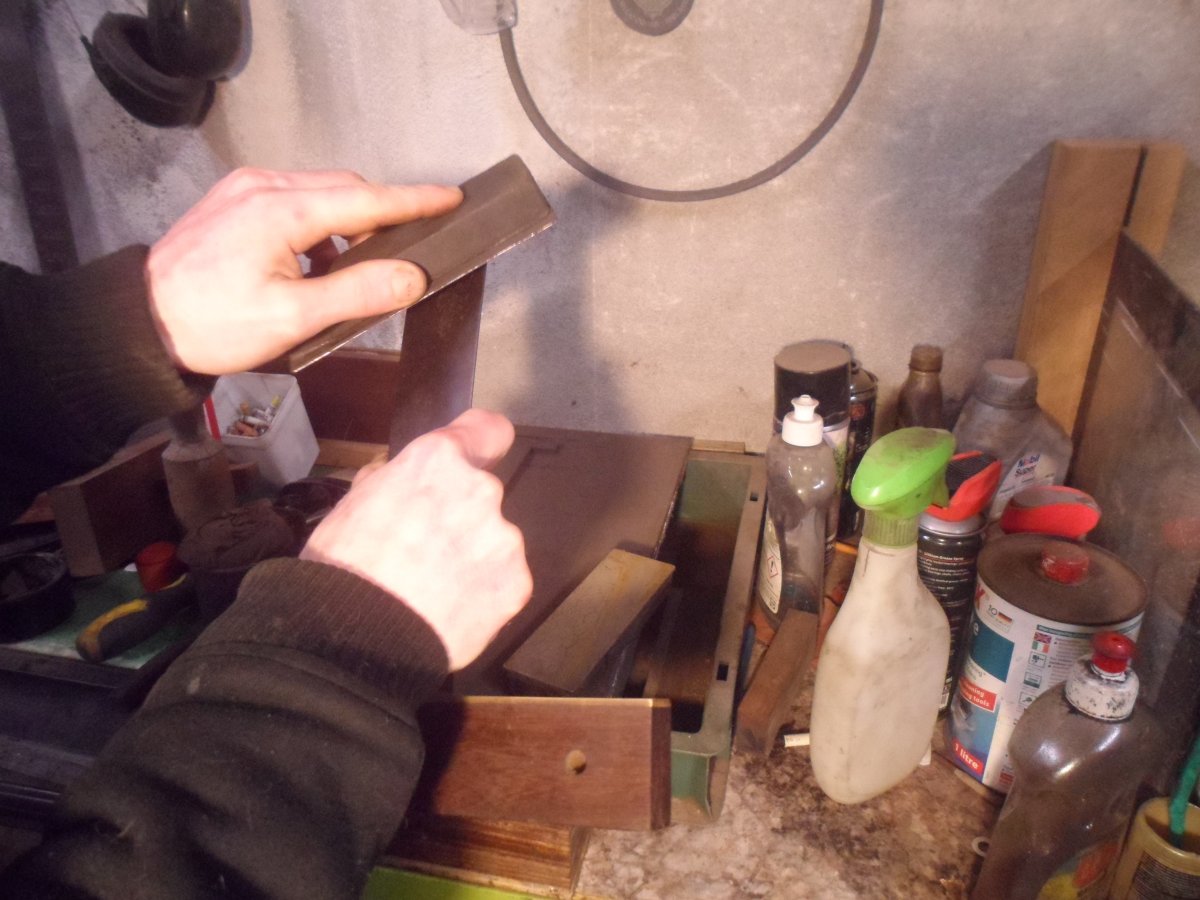 The tool is not only for that, but since I've been using my "rough" bench for a while, made of some dense composite counter material (which turned out to be handy for its versatility)
but it's proving to be progressively a bit droopier over the years.

I've gotten used to the topology of the bench, and those high spots which have developed,
the bench can't really be improved upon by shimming, within reason that is,
and I found I could make do with some old door rails in the middle to have it somewhat trustworthy enough to rely on, in combination with methodology
to achieve a gap free match in timbers of a similar length to the bench. 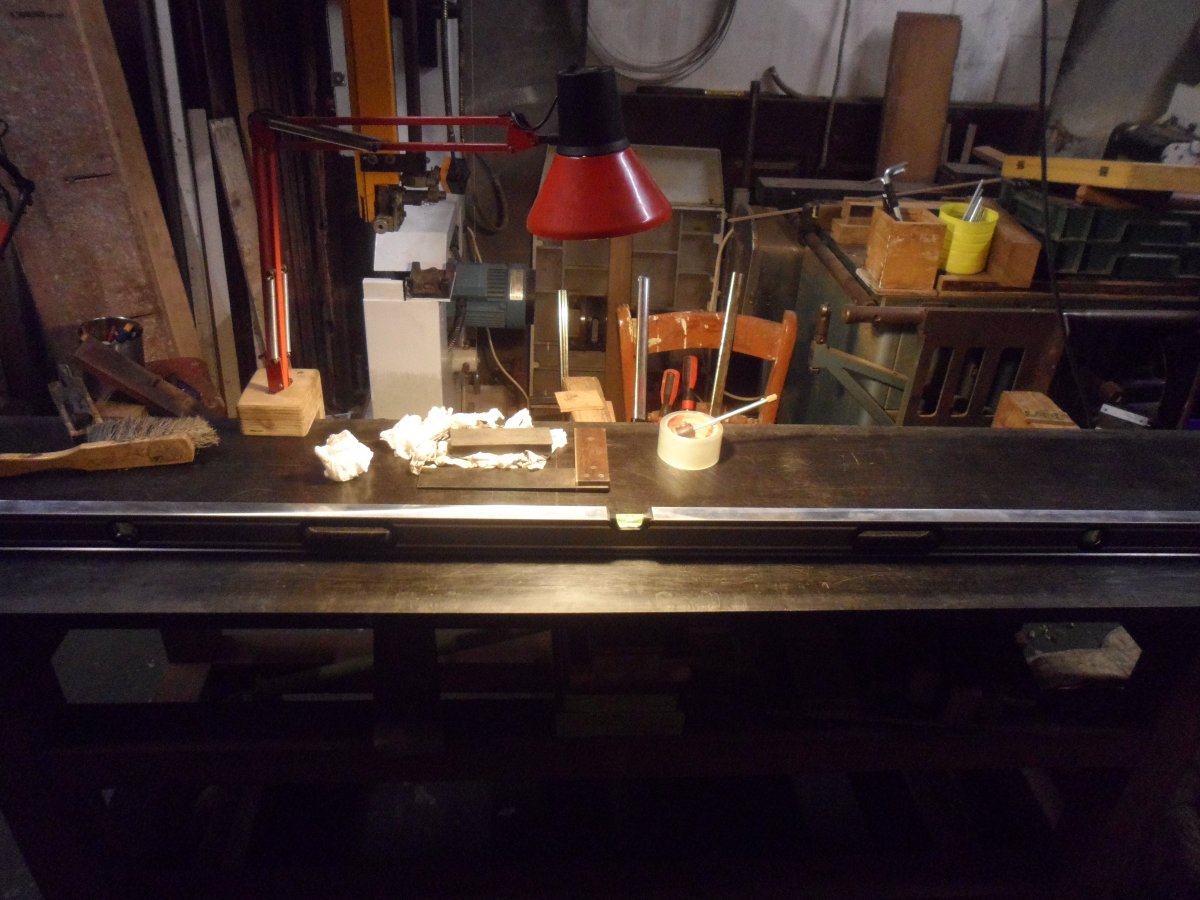 Getting that bench clean of grit isn't as easy as a few brushes down,
this aluminium is either quite soft compared to some other aluminium bits I have, Saying this, not having had experience with a quick deep milled finish,
so it could be simply down to that.
I'll be covering up the edges with tape very soon, hence marking gauge at hand.

Just to be clear this is an incomplete review, and a better look at it will be done in future,
as I'll be properly putting it's accuracy to the test, and doubling the error.
This cannot be done now, as material deflection over something of this length makes a thin benchtop not great for supporting the work to produce accurate results.

I have another bench as long, 4" thick seasoned iroko, which will be flattened at some time, and it should be a good bit more accurate than this counter.
So with that said, a quick inspection of the thing with a critical view.


This is with the bubble side up
The mill patterns are different, not as tangential as on the good side. 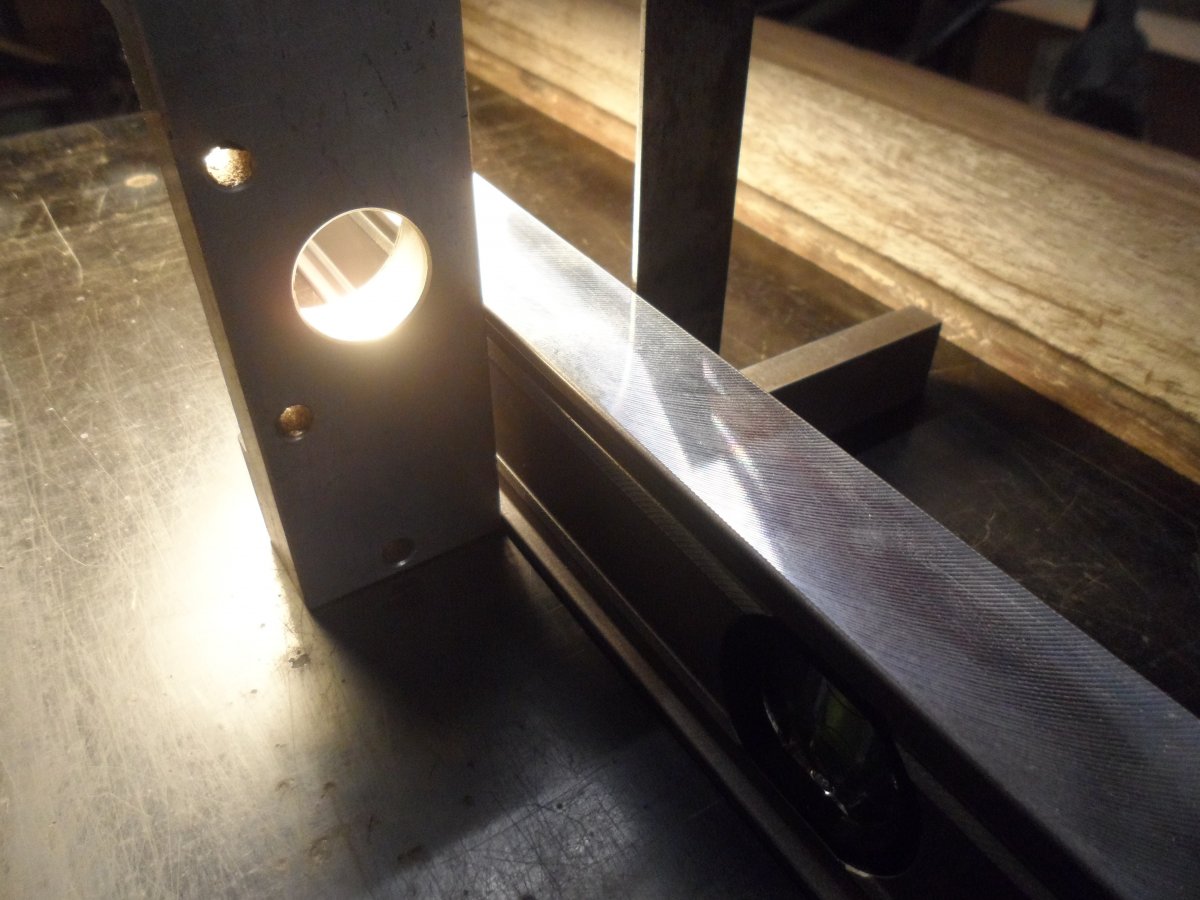 Sorry don't have a clear pic of the other good edge, the mill marks are of similar depth and near 90 compared to 45 above.

Both edges seem to have be consistent with very slight crown when something flat is hinged across... 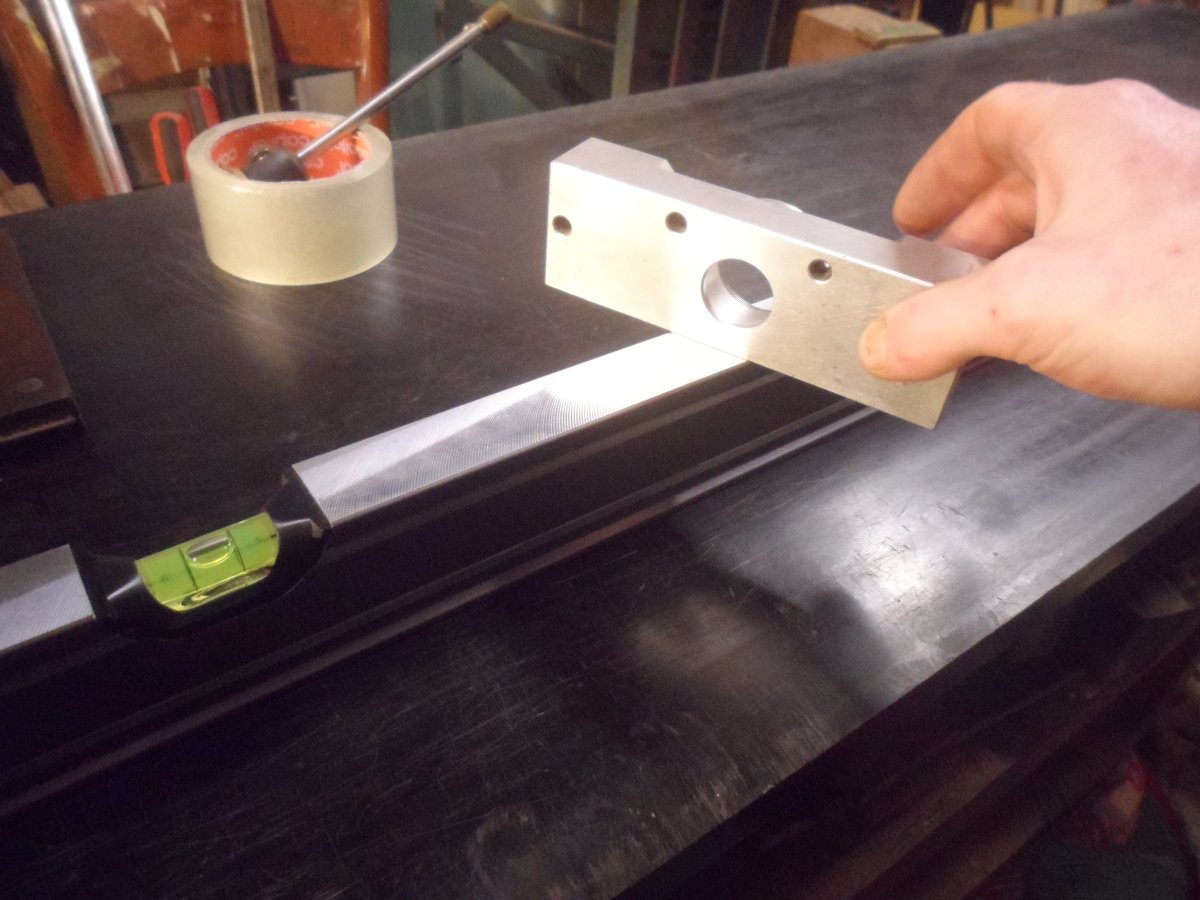 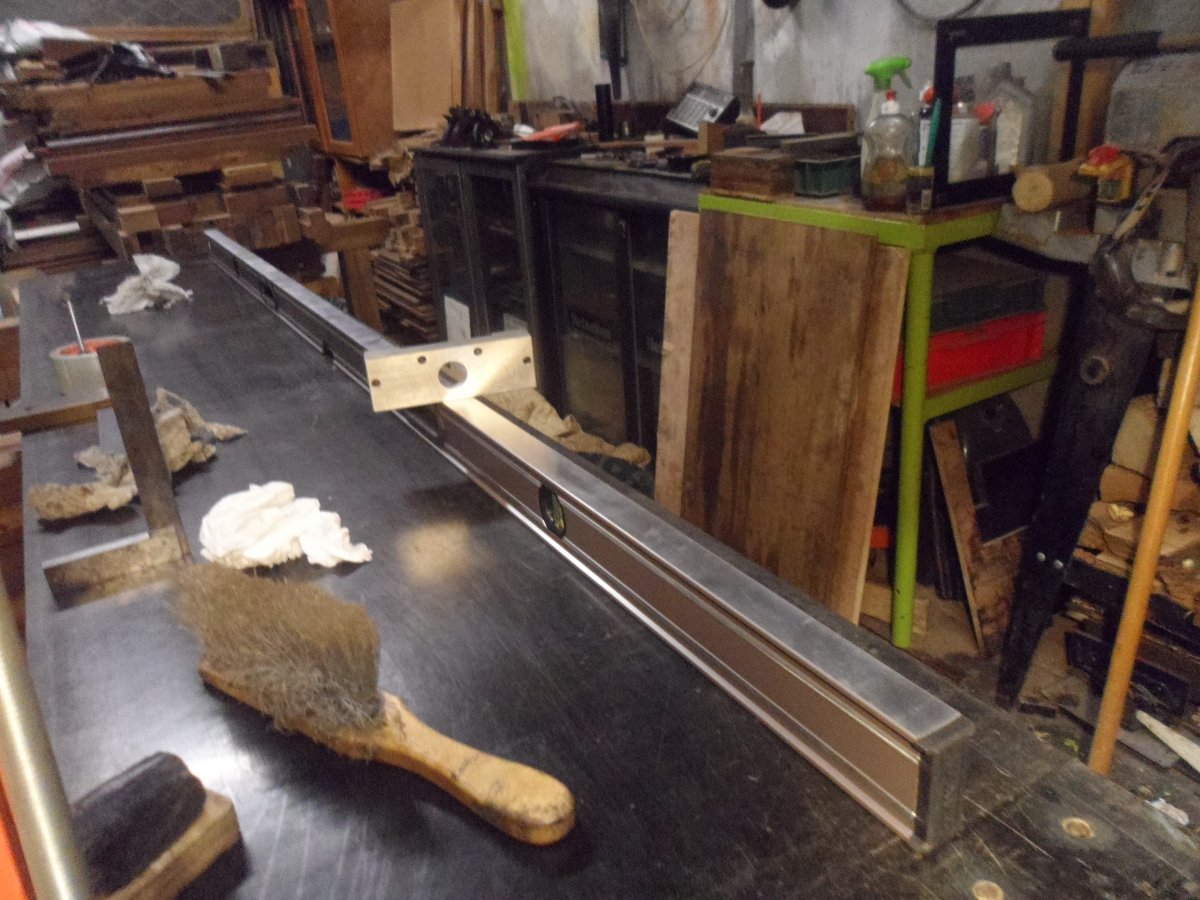 There is some discrepancy of those lips on the face which are also milled, one face side being about 1/64" out when a square is placed against it,
the same when turned back to front, which is at least assuring for this inspection. 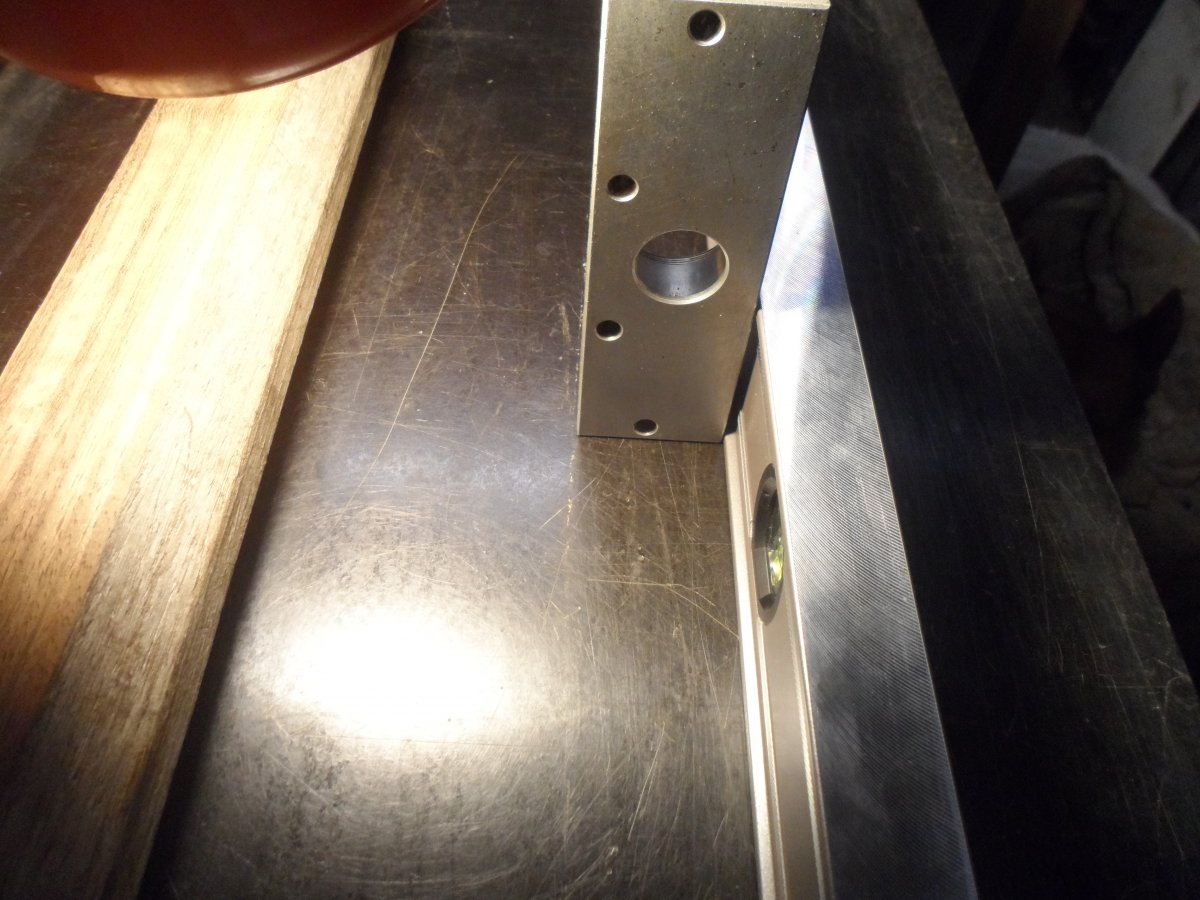 Not that I'd be much concerned about that, but just for interests sake.

So onto the important part,
Will it pick up on the known topology of the bench consistently?,
i.e, flipped all sorts of ways and still read the same...

Fairly obvious where the high areas are, and can be just about read reliably
on long stock, which it currently is setup within reason for the best result for matching timber as long as the bench.
i.e a shorter length of timber will pivot about in the center,
If one used this approach as an absolute reference for this on stuff a bit shorter, then one might think it would be a good idea to have less of a bump,
However if going back to stuff as long as the bench, and using the same approach,
and not checked one might find that two beams of timber do not pair at the ends
something which would appear from afar as planer snipe.

Just to note, should one be using a shorter beam than of the workbench length,
having the beam hinge on the ends will result in much wastage,
if plowing ahead without pairing the two "matched to the bench" timbers.


Since I have plenty of long stock which I sometimes laminate together, I make do with that hump in the middle, and check short work either side of the center of the bench.

You can likely get a very sound idea of the topology of my bench from this photo below.
Just three points of contact with the floating top,
which is dead on center, and I have marks to keep an eye on it.
That being of much importance when hinging.

So to start things off with some basic things first...
Forgot to mention I found NO hint of rocking whatsoever! 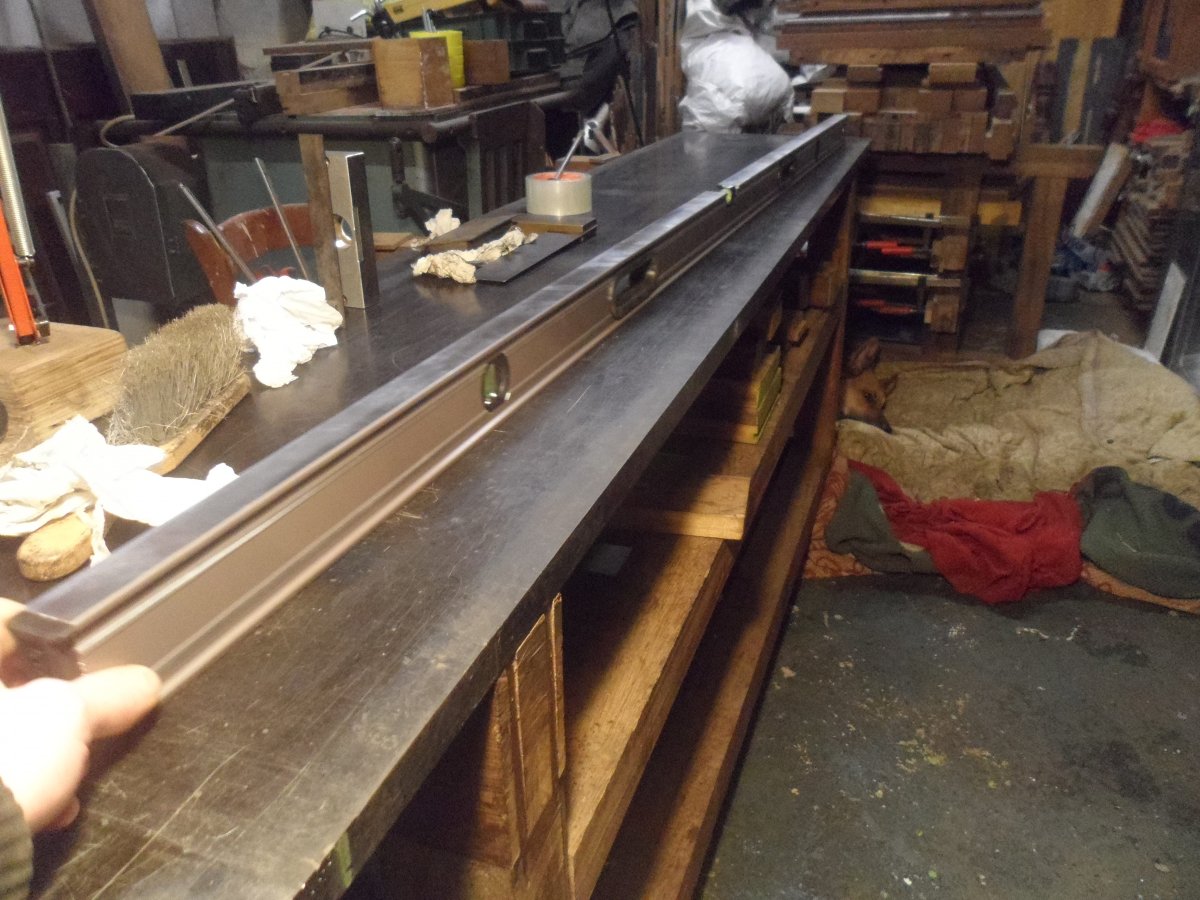 Having done so on the good bottom edge, and swapping end for end,
I found consistency which was promising....

Now to check the other edge with the bubble to get an idea if this "straight edge" had any sort of bow to it,
Seems to pick up/hinge on center but just about, after which I can test it on a low spot to see if it picks up on that. 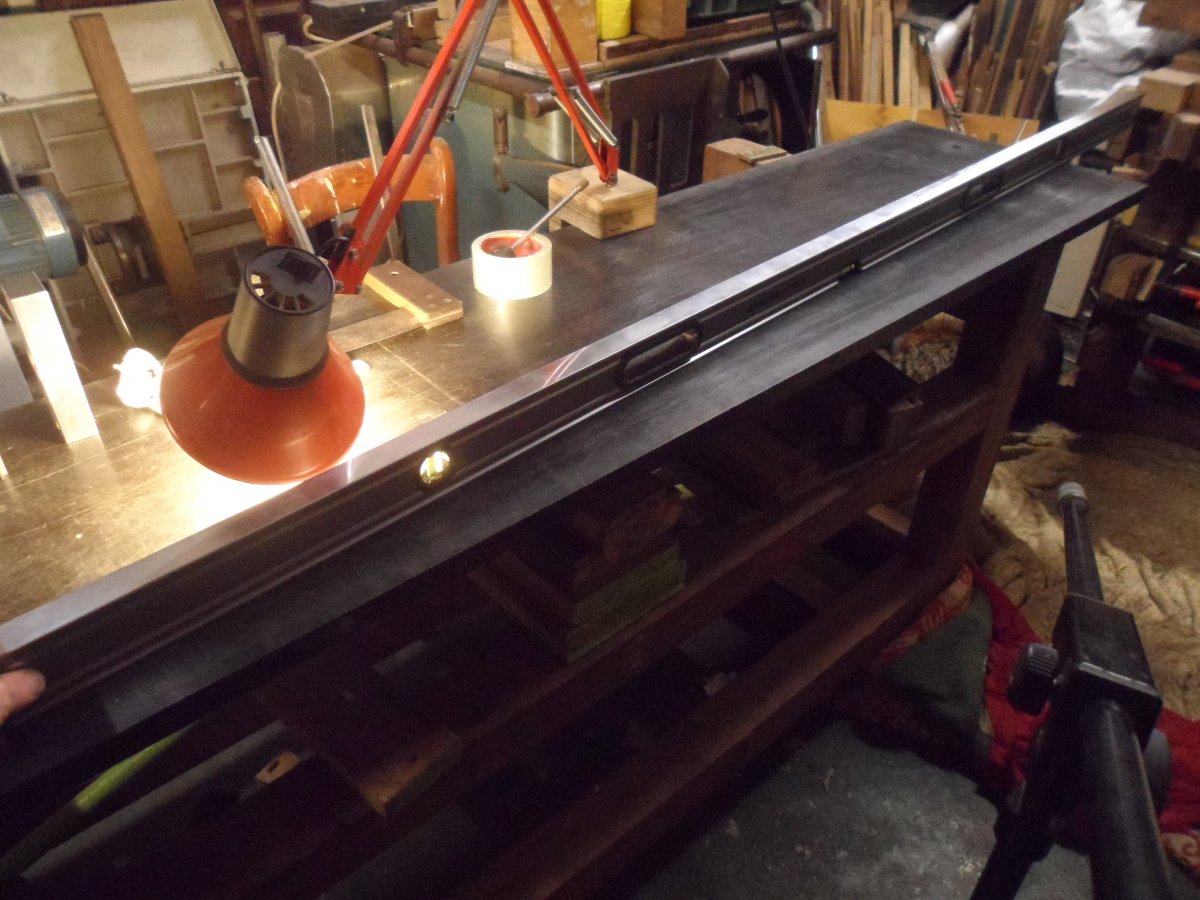 Some hinging still apparent, so it would make sense to assume that this is favouring pivoting on center. 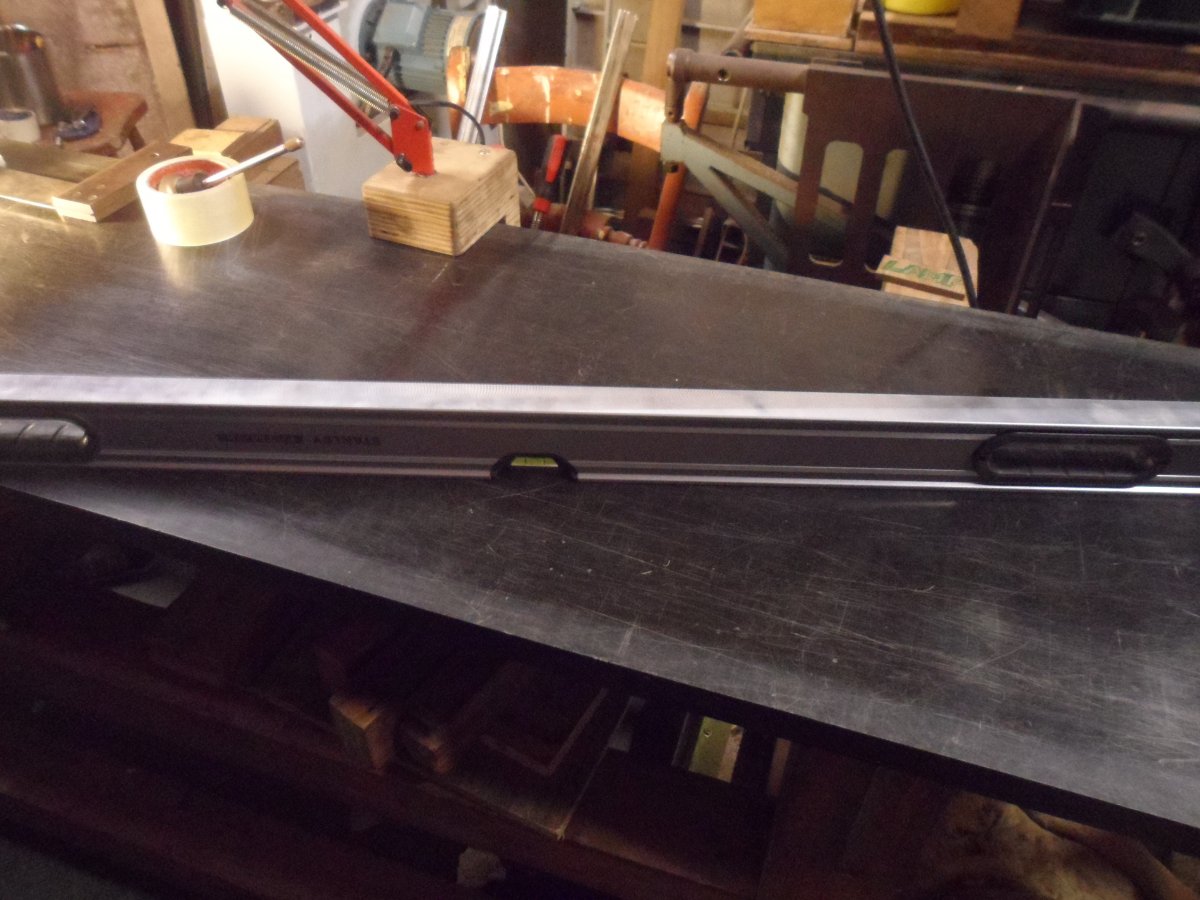 With this assumed, will be checked in a bit,
Some more equally important checks first, one which I was far more eager to check.
The bevels is what I'm talking about!

Would they be too much chamfer to get a good visual reading?...

Thankfully very easy to read and far more apparent than long timbers due to deflection. 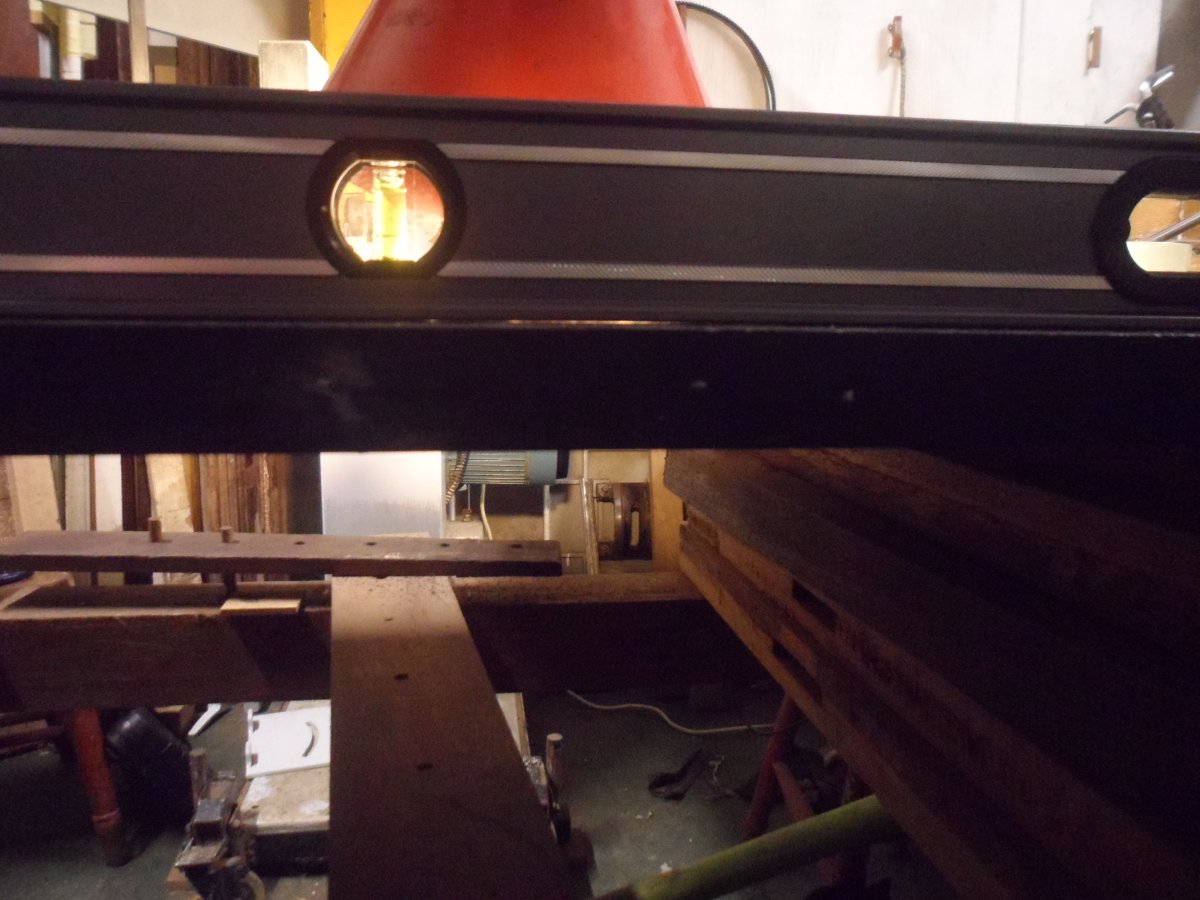 Nothing much unexpected there, but quite a bit more apparent that deflection of the ends of my bench were probably a bit more than I had presumed,
This is very difficult to tell how much with any certainty, so it's definitely a very rigid thing compared to some timber beams.

So some more testing to come with a slight bit more tolerance, not much more but some.
It's proved it's good enough for me at this stage.
Just swapping and switching these timbers around, looking for a match,
and also the largest error... 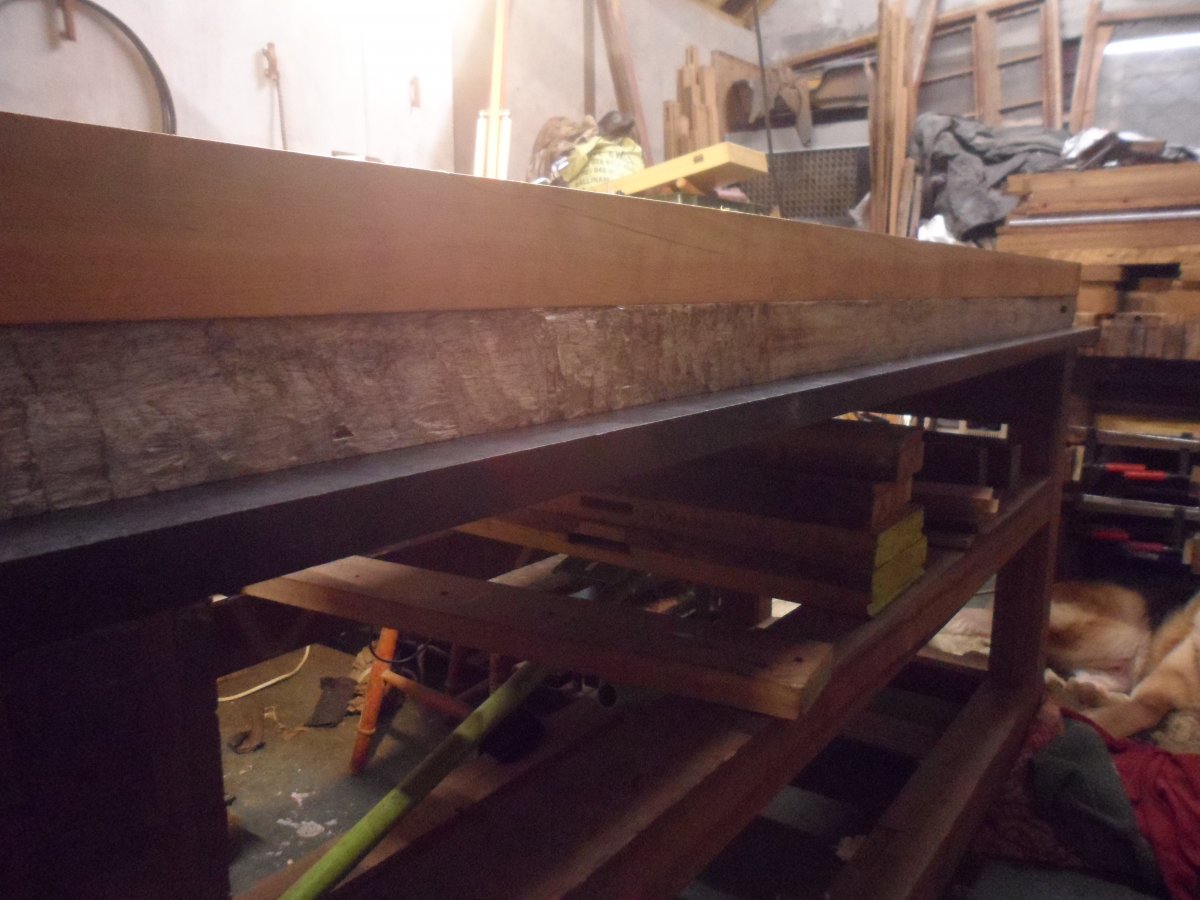 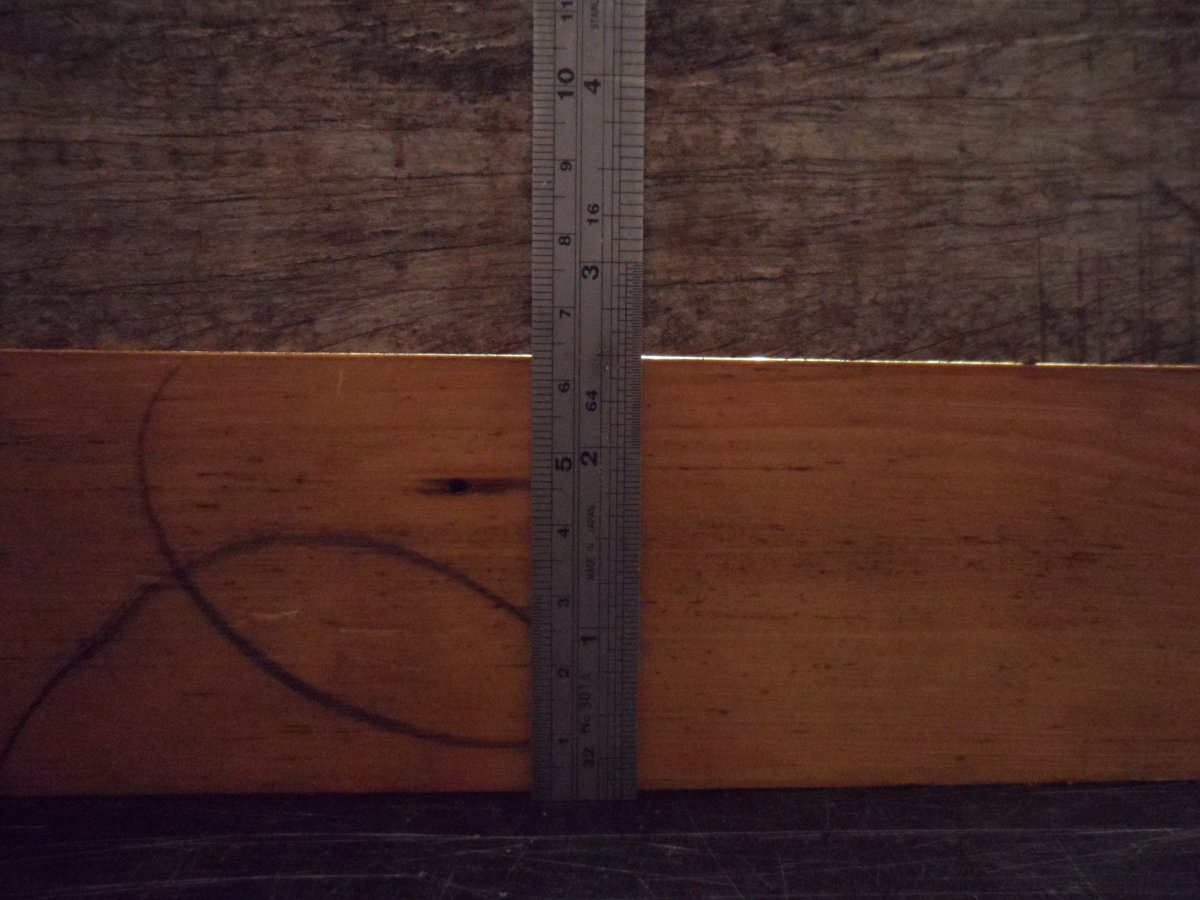 And probably the most apparent check is the high spot on the level,
which if both timbers was a half a 64" hollow along their length, adds up to that.
so interesting to see if the high spot will bottom out on that hollow or not.

Still some light showing, so it's not likely out by more than much more than half 1 /64"
which is beyond what I can measure on stock of this length, with any surety as of yet. 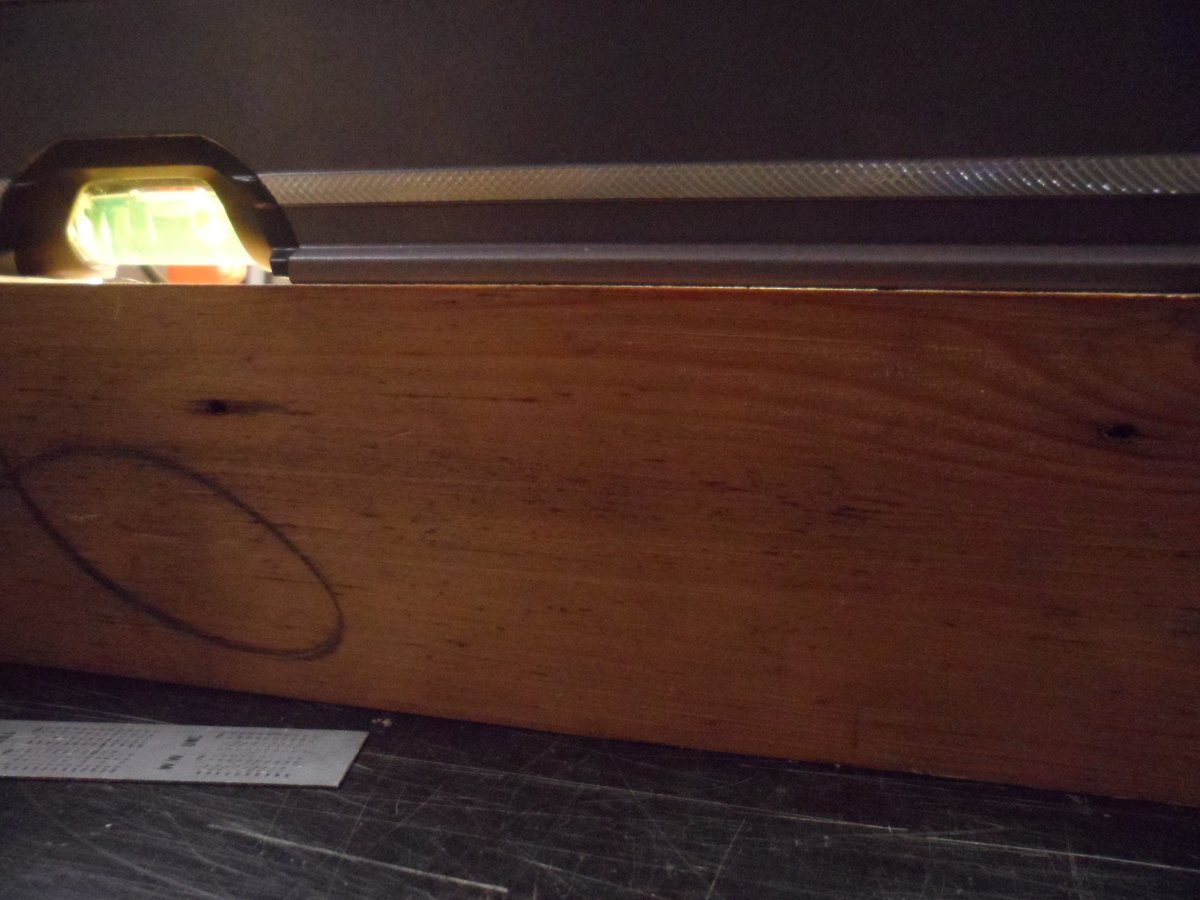 It'll be a long time before I'll be revisiting this, so you take your own chances.
Something could be outta whack yet that has fooled me, as this was only a brief lookover.
Found some grit already from only doing a few pivoting/hinge checks, and you can tell
already!
Wanting to put this to use soon enough, and put the thing away for until I need it.

Should be able to use this to make an even more accurate tool, as one can double the error with a match, assuming adequate support is provided.

That's it for now, going to tape up that delicate milled surface, only need something light enough, rigid, and twist free for the job, and not super accuracy needed yet,
so quite pleased so far with it.

Just making note that this is a "day one review" and will be incomplete for some time.
Cheers.