I have two Stanley Bailey # 5 planes that have differing heel plates, one has ribbing, the other none.

Both are "Made in England" planes.

Can anyone give me an indication as to their respective ages, or do I need to provide more information? 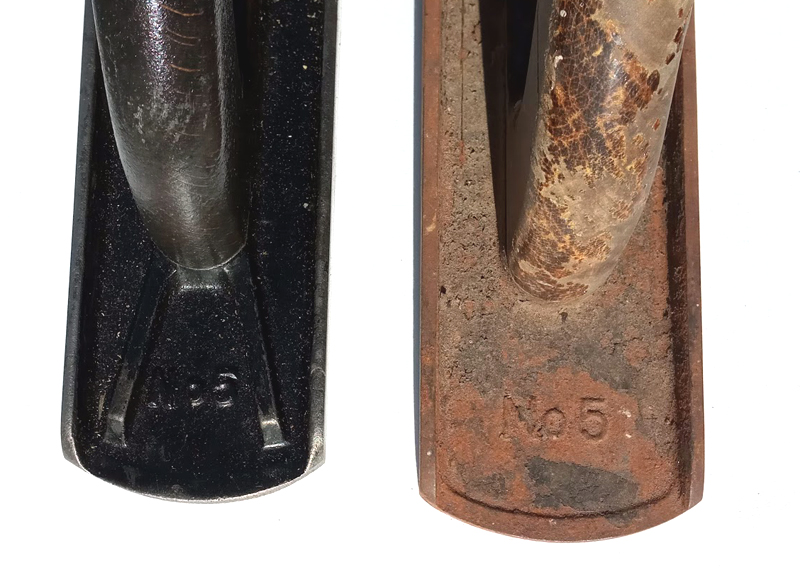 As far as I'm aware its difficult to precisely date UK made Stanleys, but this might helpt if they are from the US

I think "Made in England" may be a clue that they're not.
O

I had to read it again, blimey. I missed made in uk part :shock:

This question comes up fairly frequently. The consensus is that there is no complete "type study" of the relatively brief period (about 50 years) that Stanley planes were made here. We don't have enough collectors who care or access to company records.
Remember that Stanley outsorced casting to other companies such as Qualcast and Crane (stanley-planes-made-in-wolverhampton-t109749.html).

A better clue might be the wood used for the handles. If one is rosewood and the other stained beech, the beech is probably later.

and if one is beech and one plastic the plastic one will be later.
Z

What can you tell me about the splines, or the lack of?

The splines/ridges/webs/reinforcement usually came later. If the irons are original the tops of the newer ones are more rounded.
E

I can't remember where I read it (quite possibly here!) but it was stated that the web reinforcements definitely mark the plane as later. From what I've seen myself it is quite clear from other features of the planes that this is correct, although of course parts can be swapped in and out of planes to cloud the picture other details on the body castings themselves support the assertion.
O

I'm not saying that the statement about the ribs being a later feature is wrong, but am just wondering if anyone has any evidence for it?
Comparable planes bought new at known dates? Magazine reviews?

Bearing in mind that there must have been many sets of castings for these planes.
O

Another interesting factor I noticed when browsing carboot sales is difference in casting thickness. The ones that are more rusty and therefore presumably older are much thicker. imho and also I think the older ones have bare cast iron edges while newer ones are painted

AndyT":mueeejqq said:
I'm not saying that the statement about the ribs being a later feature is wrong, but am just wondering if anyone has any evidence for it?
Click to expand...

I would base my supposition on the fact none of my rosewood handled ones (Stanley and Marples) have ribs, nor does my beech handled 1970s Record. This of course doesn't count as proof.

But it's a start!

Don't the ones with the webbing, have a different more angular profile on the iron,
with heavily rounded corners, compared to earlier ones with the tops rounded.
One would presume the rounded cornered angular profiled irons on the webbed planes, is a sort of nod to the sharply angular profiled laminated irons of old.
Edit:
Phil.P
Sounds like you have reason to believe that there was planes sold that had the webbing
with irons which had the rounded profile?
Maybe I read this wrong?

I don't have one made this side of the early '70s, but all mine are without ribs and have irons with square tops - this may mean little, as there is no way I can guarantee the irons are original. The newer stuff I see around (by newer I mean made in about the last forty years) has ribs and rounder topped irons. They describe Record Marples on ebay as "vintage" which always makes me laugh - I haven't got anything that new. The most I ever paid for plane (about twenty years ago) was £30 for a Stanley No.8 with a near new Sweetheart iron. That's a BIG casting ........ with no ribs.

You may see the difference in the two irons when you grind them - the squarer topped one are usually laminated, and this will show as two different coloured steels on a newly ground edge. I think the newer Stanleys again have an even more rounded top.
Z

So the rusty plane on the right, is the older of the two?

PS we seem to have similar interests

Are the handles on the one on the left plastic? That's often an indication of age - I seem to remember Stanley going plastic in the '70s and Record a bit later.
http://rexmill.com/planes101/typing/typing.htm
http://recordhandplanes.com/
http://www.wstoolsbirmingham.com/
www.wodentools.com
http://www.supertool.com/StanleyBG/stan1.htm#num5.25
https://www.hyperkitten.com/tools/stanley_bench_plane/
I haven't any sources of info. on Sorby planes, as I've never seen one let alone owned one.
Enjoy.
...................
Don't forget the dating info. is for US made Stanleys, not British and probably not those made elsewhere. It may give an idea, though.