I think there are a few of these scattered among the members, if any owner has had their 73's butt cap apart during a restoration or refurb I'd welcome your input.

First, has anyone managed to get the butt assembly apart without breaking the washer thingy that holds everything on to the shaft? If so any tips in case I have to tackle another one that's really stubborn?

Mine was really jammed on there and I wouldn't normally have continued trying to lever it off but on the brace I acquired yesterday the head was so wobbly (maybe 10° swing each way) I thought the shaft was bent or the head was broken somehow. So I felt I had to get it apart to get a peek inside and see if I could figure out a possible fix.

Now that it is apart the cause is clear, there's masses of play between the top of the shaft and hole in the main part of the butt assembly. Even though it was bone dry inside I don't think this is just from wear, I have a feeling the fit wasn't the tightest to begin with on a mk 4. Are they all a bit loosey goosey or do they vary?

At the other end the ratchet and chuck shaft were seized up (again zero sign of any oil) but that was easy enough to fix thankfully. The jaws were the only thing with any grease on them and they look practically new, another pointer to the butt issues not being from heavy use.
B

Hi Ed, I've got a No 73 Mk 4 and the head on it is nice and firm and spins freely. The wear you've got in yours will be down to lack of lube over time rather than poor construction.
Now that you've thrown the bait out I'm going to have to pull one of mine apart to see how it's constructed before I can offer an opinion. I would assume that the balls are worn or completely missing from the race at the base of the hub? A photo might be helpful too.
Cheers,
Geoff.
B

Straight after breakfast into the shed and got stuck into my No 73 Mk 4. Removing three screws holding the head revealed the spring clip, that Ed referred to. 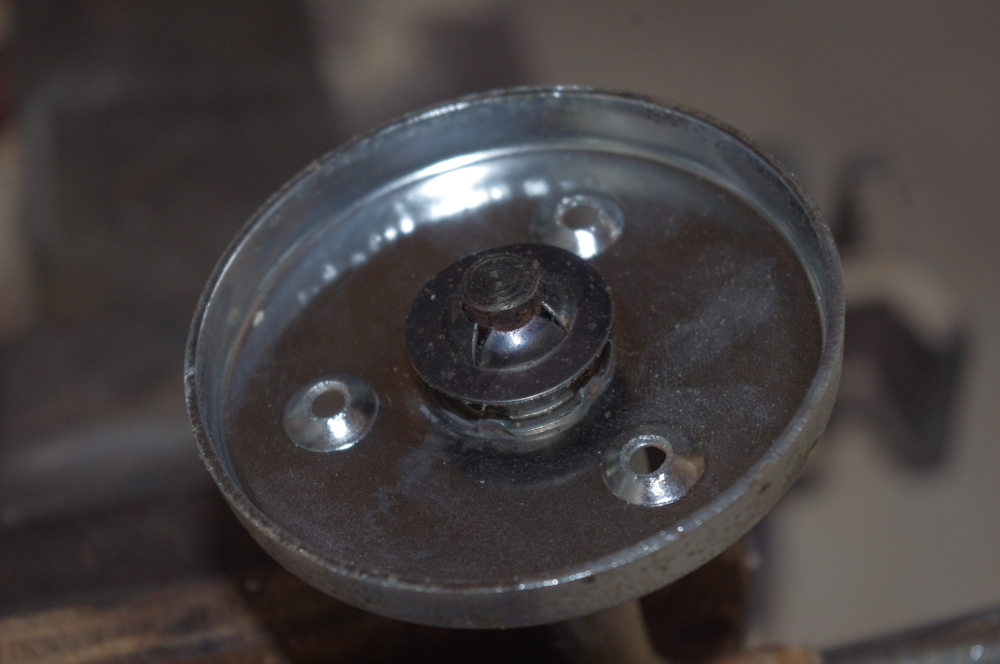 I decided that the only way to get the clip off was to grip it with a pair of multigrips and twist it off gently so as not to break it. After it broke in two it was easy to remove. 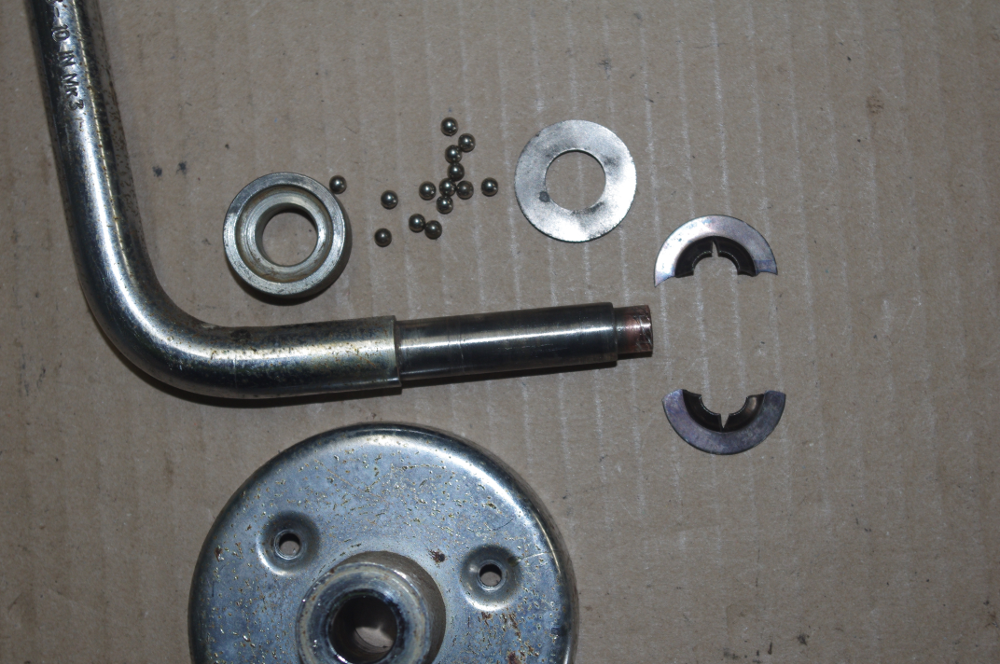 Dissembled shows the ball race of 14 1/8" balls which ride in a cup at the base of the shank with a steel thrust washer between the balls and the hub. Putting a little smear of grease in the cup before replacing the balls avoids losing them on the floor, 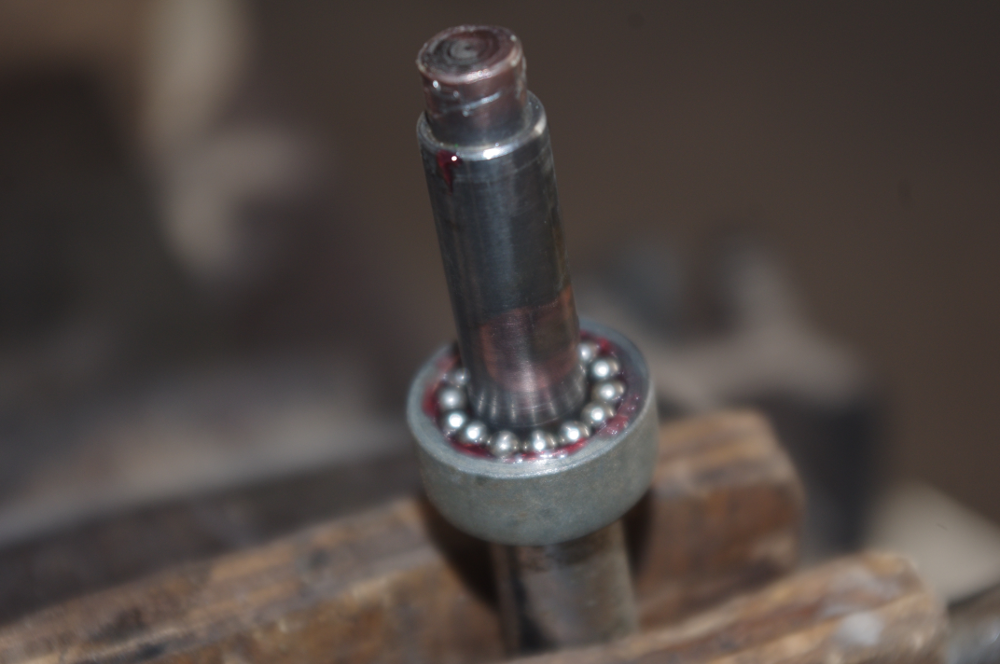 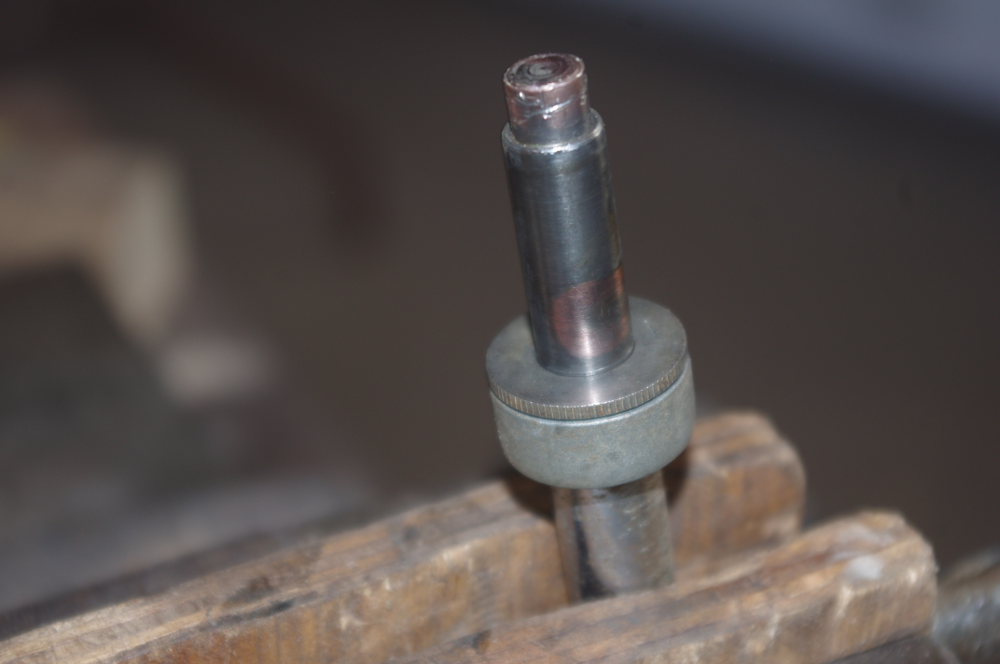 then the thrust washer and the hub. 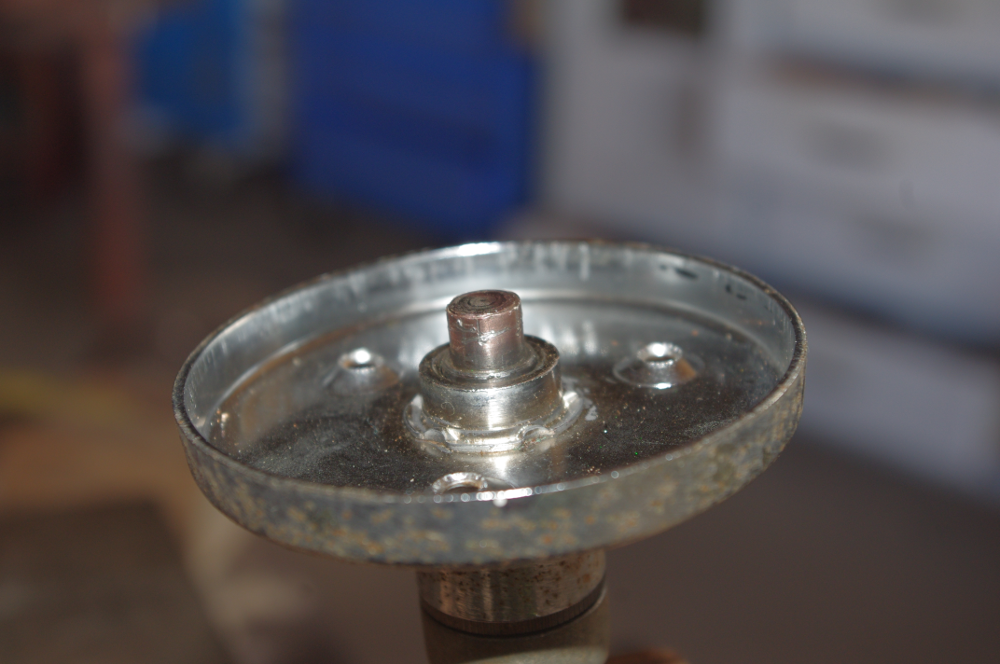 Not having a spare spring clip I decided the best course of action was to slip a washer over the end of the shank and peen it as they did in "them olden days". Two washers actually, previous photo you may be able to see the shoulder of the bearing surface of the shank extends slightly above the hub so there is no danger of making to tight a fit once the peening is completed. 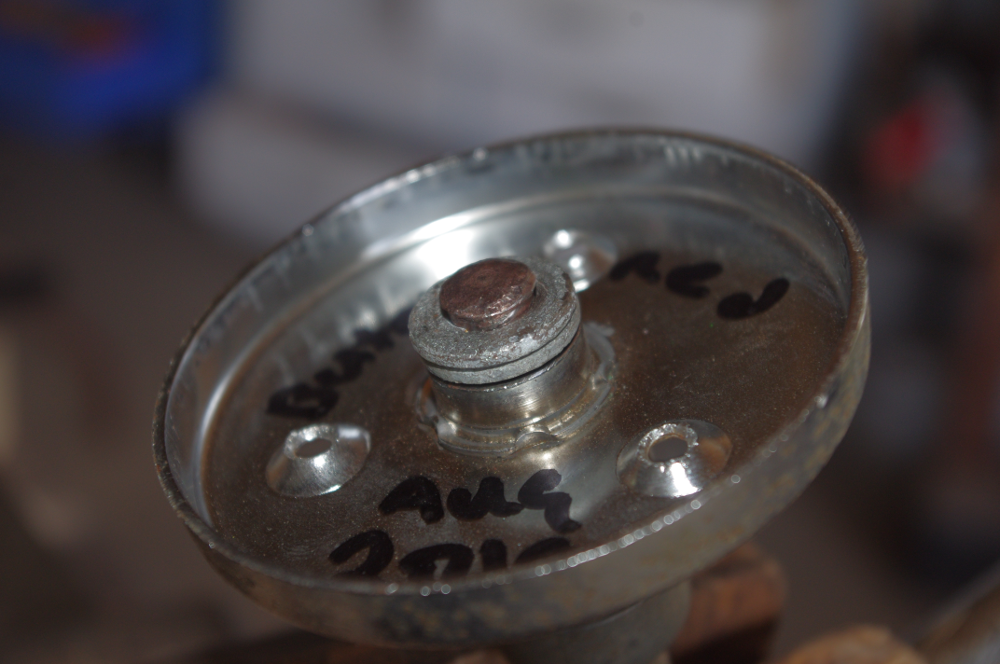 Before reassembly I put a note inside "Butchered Aug 2019" and because there is a big recess in the wooden head (the brace not mine) put in the two halves of the broken clip. This is so that someone having an explore in the future won't get the wrong idea about the construction.
Cheers,
Geoff.

Geoff you absolute gem! I didn't want anyone to break theirs getting it apart just to have a look. Thanks so much for going to that effort, I do appreciate it.

I'd gotten my washer off by levering, persistently but as gently as I could and managed to only snap one of the projections off. It might still be useable, I didn't push it back home to check as it may be reseatable only one more time. If not I was planning on doing some filing work on the shaft so I could fit a circlip or a modified standard washer (for people who aren't Geoff, this is another standard fixing method in braces). Taking inspiration from you I will pen a similar note inside the hub

In case it's of help to future searchers, with Geoff's brilliant post as a starting point I managed to find a number of related thingies in the broad category 'push-on fasteners'. There are various names including simply retaining washer, but starlock or star washers seem to be exactly what was originally fitted.


Boringgeoff":1c9rpkd3 said:
The wear you've got in yours will be down to lack of lube over time rather than poor construction.
Click to expand...

Certainly seems like it now! I couldn't believe it was wear in part because there was no swarf or metal dust inside, but I didn't leave room for a previous owner having been in there and cleaned it out. Although why they'd do that and not add even one drop of oil is beyond me :shock:

There are other signs of heavy use now that I look for them, including a raised burr above the bearing cup which prevents it from being slid off. This level of use makes the condition of the jaws all the more remarkable, they look for all the world like they've never seen a bit.


Boringgeoff":1c9rpkd3 said:
I would assume that the balls are worn or completely missing from the race at the base of the hub?
Click to expand...

All present and accounted for. Just a bit rusty and dry as a bone.

I wouldn't be too upset for the next owner if these were missing or worn down, I have had quite a few braces over the years with no bearing race on the shaft and they work very well despite this, although obviously they benefit greatly from being kept well lubricated since it's just metal rubbing on metal.

Now what to do about the wear? I'm planning on trying to shim or pack out the gap in some way, if I can't get that to work I'll build the shaft back up with steel-reinforced epoxy, using the well-waxed hub as a former.
B

Starlock sounds appropriate I had no idea what they might be called. In the manufacturing process they'd speed things up compared to the earlier methods of attaching the head. My removal method of turning and raising was going quite well and I'd just started to congratulate myself when it snapped in half, which meant reverting to plan "B".
Many hardware outlets manufacturers catalogues listed replacement jaws which might explain the good condition of yours compared to the rest of the brace.
I've previously sleeved worn shafts with shim material but will be interested to see the result if you go down the epoxy path.
Cheers,
Geoff.