Yesterday, when buying a couple of second-hand hand planes, I was given a small plane that was caked in years of dust and grime.

The small plane was missing its iron cap and iron, but that was no big deal, as I just wanted to clean and restore it.

After dismantling and cleaning the plane, I noticed that it had no manufacturers name or model number cast on it. The only identification marks that I could find was "STANLEY" on the Lateral Adjusting Lever and the letter "B" on the back of the Lever cap.

The plane's sole measures 7 3/32" (not counting the tote overlap), the brass bolt nuts are solid and the low knob and tote appear to be Rosewood.

There is no adjusting screw on the Frog.

At this stage, I am unable to place a year or type against this plane.

Can anyone ID this plane from the attached photographs? 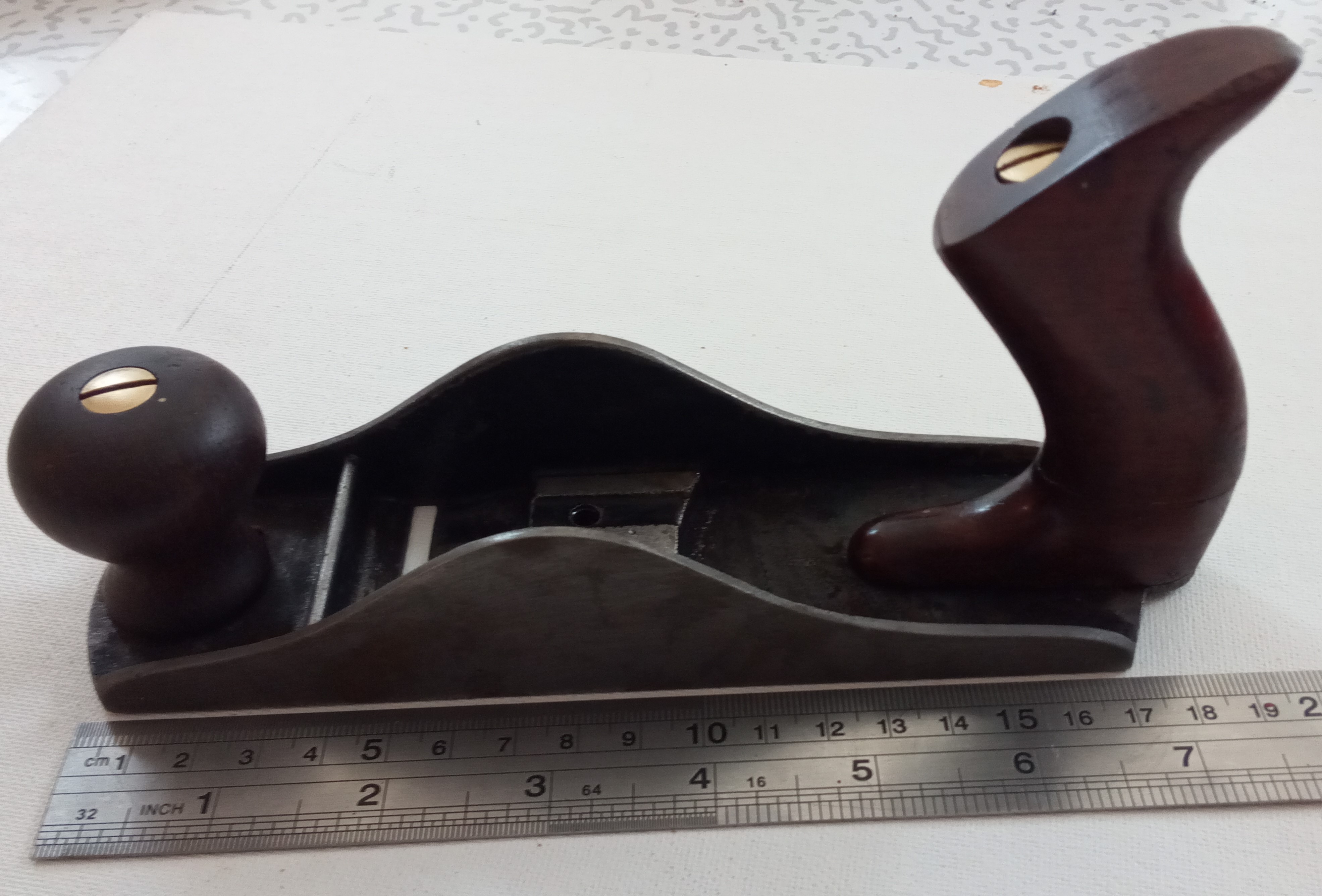 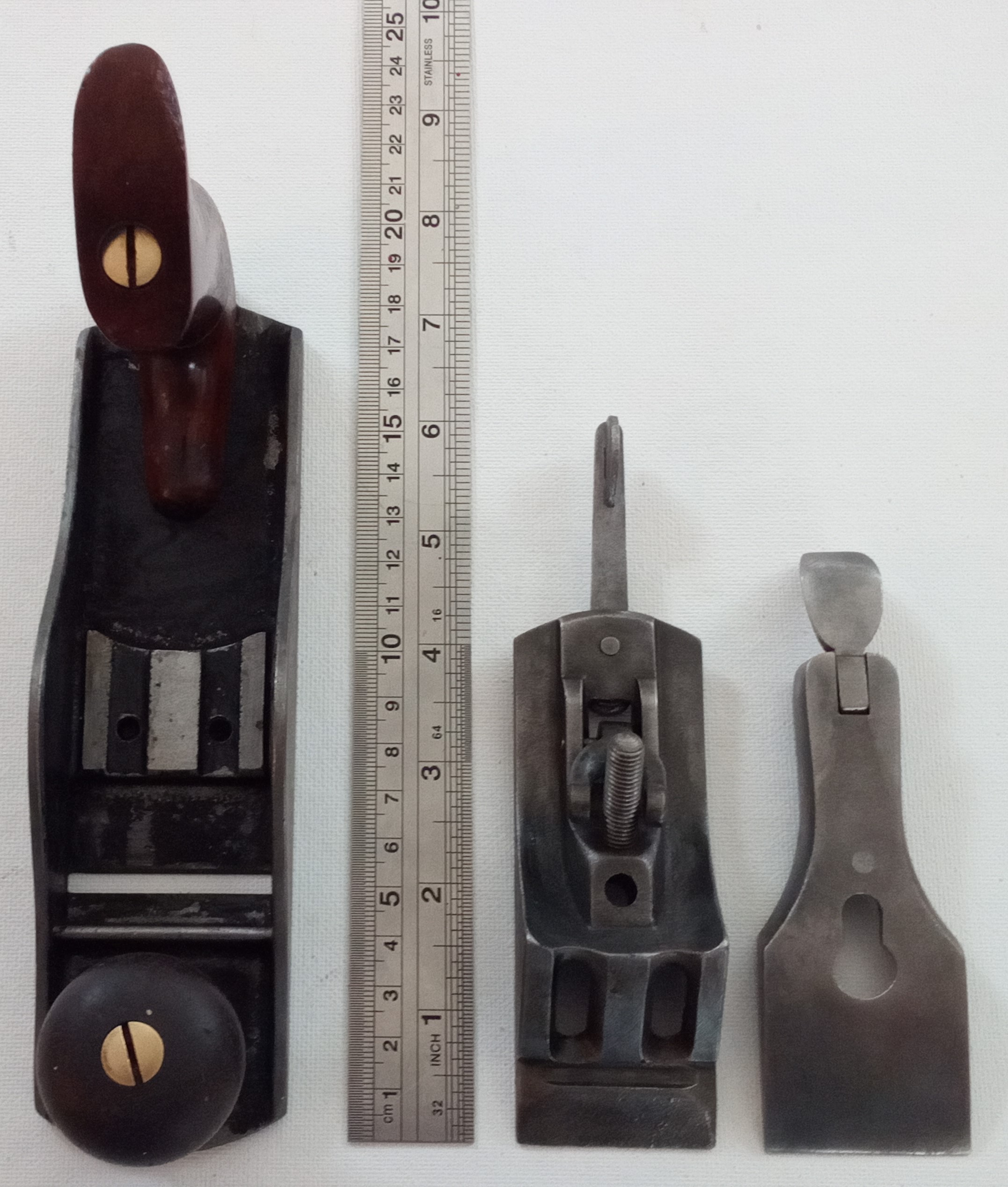 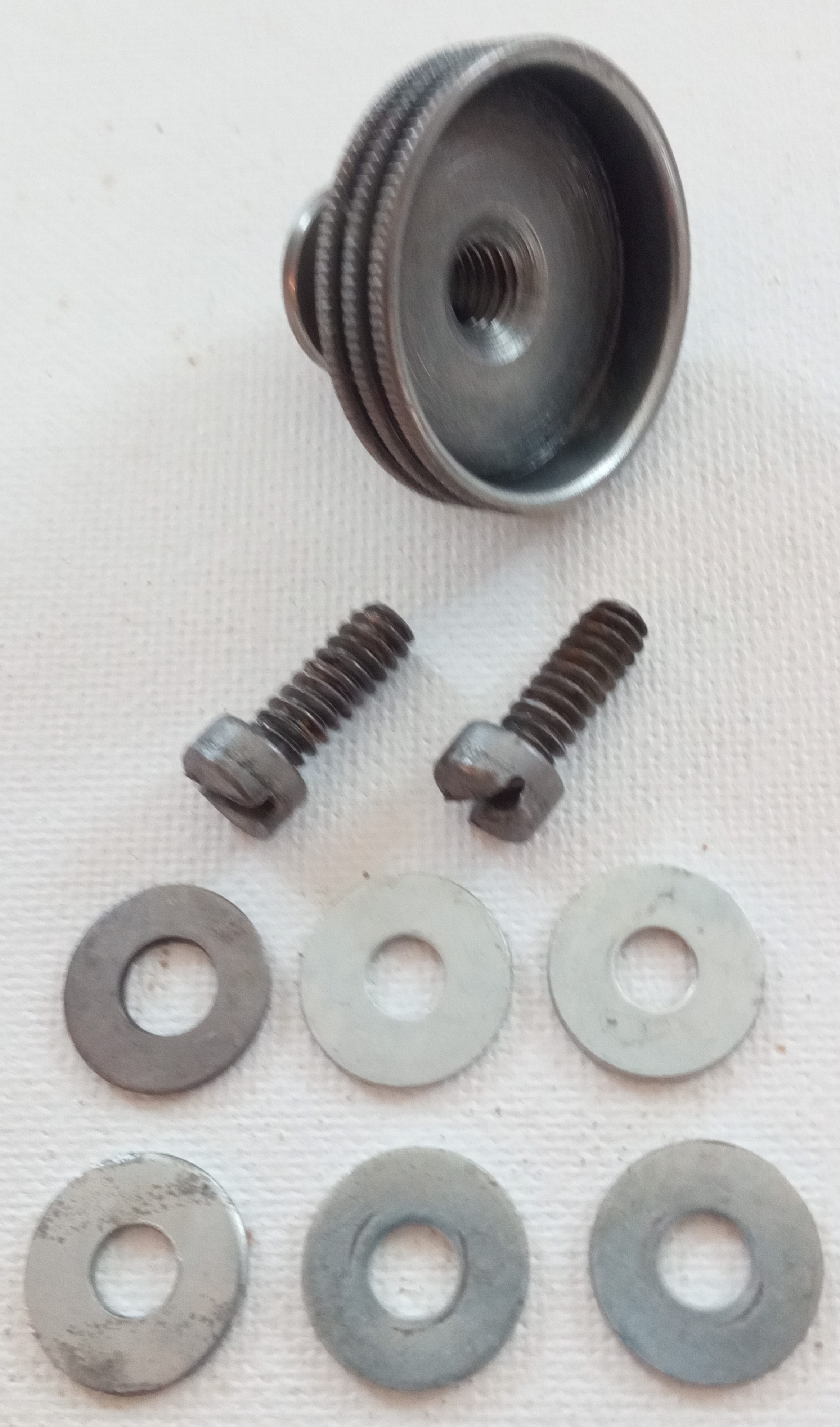 Oh you lucky thing! Few enough get to handle (okay, fondle) a no. 2 much less own one given their scarcity and the prices they tend to go for.

Where are you with your dating? Or to put it another way, why don't you think this is mainly a type 8? 8)


ZippityNZ":3q60d7s4 said:
I do not believe that the Frog Screws and Adjusting Nut are the originals. The Frog Screws appear to be too long as each was sitting/packed on 3 washers...
Click to expand...

Yeah, hacksaw those down to a more suitable length so you only need one washer per.

If you want to make the washers look less new, soak in vinegar for a couple of days to a week, clean well (soap and water, toothbrush), grease them and they'll look like well-preserved examples 60+ years old.


ZippityNZ":3q60d7s4 said:
...and the Adjusting Nut appears to be steel or something else.
Click to expand...

Deffo a replacement, shame about that. Check with a magnet and you'll know if it's steel or not.

Is the handle in two parts or already repaired? If it's glued but not stable it could be worth separating it for a better repair than currently. Truly invisible repairs are possible in rosewood handles but at the very least there should be no visible step (hammer)

Thanks for all the tips

The Frog style has me stumped.

Well, I'm no help as I've never seen one. A very nice gift, even if you need to adapt an iron to fit.
B

http://www.supertool.com/StanleyBG/stan1.htm#num2
Read the entry for the #4 for greater detail.
http://www.hansbrunnertools.com/Stanley ... Planes.htm
May help.
https://www.hyperkitten.com/tools/stanley_bench_plane/
May cause confusion, the #2 didn't follow most of the changes.

The raised ring refers to the outside periphery of the knob base and not the core.
So count this as pre- raised ring.
Blade assemblies are normally available on the dealer tables at David Stanley's Auctions
Cheers Andy
E

I presume you're aware there are undocumented variations the type studies don't cover? Add to that that the smaller planes don't follow all the dating templates exactly (these are based to a great extend on 4s, being by far the most numerous plane) and you're never going to get a totally definitive answer.

Doesn't appear to be one on this one either. Another angle of I think the same plane here.

Although obviously there are some replacement bits assume it's not a parts plane or harlequin, so body, frog, lever cap and handles are contemporary.

Raised ring covered already.
No bead on the knob, type 6 or later.
B casting mark, type 8 only.

No later features, e.g. waisted handle nuts, at least strongly suggest a type 8. There being no patent dates on the lateral is a puzzler, it does seem there's room for it so maybe down to a weak stamp that's been erased by time?
Z

Oh dung!! Have I misunderstood the raised ring thing?

Didn’t Stanley use bare steel thumb wheels at one point? I think maybe during one of the wars?
N

This is the problem with parts being interchangeable many planes end up hybridised.

Zippity NZ ,the raised ring that you refer to is for the outer edge of the knob to be seated on which yours doesn't have. The ring on yours is where the casting is thickened to take the knob holding rod.

Yebbut the No.2 didn't follow the type studies, so saying it might be a type 8 or type 17 is not really relevant.

I think the lucky sod has a mostly genuine Stanley No.2.

The 'Stanley' on the lateral lever makes it a genuine Stanley (or a good forgery).

The steel adjusting wheel is a new one on me - but it looks very Stanley-like (I think the war production theory might hold water). My 1970s English No.4 has a steel adjuster wheel but it's plated (cadmium?). What diameter is that wheel?

The frog screws are probably replacements. The adjuster wheel may well be a replacement. The lever cap may be a ground down No.3 lever-cap (any signs of that?). But the sole and frog look authentic to me. The tote can only be a No.2 tote (not sure if the knob size was unique to the No.2).

Judging from the photo the wheel looks just like the type used on Stanley England planes. Oversize for a no. 2 I'd have thought, but I'm not sure if the typical user can really wrap their fingers about the rear handle anyway.

Given the bedding for the frog I think the wheel must be a replacement. They can't be contemporaneous, because that bed went out so long before that style of wheel came along. Assuming all Stanley parts here naturally.
E

Breaking news: just seen a no. 2 frog that exactly matches this one, including not having any patent dates on the lateral.

The wheel fitted is small, brass, two raised rings, no stampings on the recess (type 7 and later).

Can't link as it's a live eBay auction.
Z

Hey Guys. Thanks for all your input.

I am sooooo excited with this gift

I am now trying to arrange a visit back to the elderly retired cabinet maker who gifted me this plane. I had met him online when I won his auction for a #5 1/2, a #3 and a #78. When I went to collect my "buy", he threw in the small plane and an old Cherry wood Stanley 00 level that I had spied sitting high on a shelf collecting dust and crud

Going by Zippity's later posting, that the steel Adjusting Nut is 1 1/4" in diameter, and is identical to one on a Type 17 #5 he has, we can conclude it's not original to this plane.


ED65":2p5b16nw said:
Given the bedding for the frog I think the wheel must be a replacement. They can't be contemporaneous, because that bed went out so long before that style of wheel came along...
Click to expand...

That bedding style continued on the Stanley No.2 until the end of production in 1961.

I resolved the issue of the misfitting frog screws.

ED65":55tf53ef said:
Given the bedding for the frog I think the wheel must be a replacement. They can't be contemporaneous, because that bed went out so long before that style of wheel came along...
Click to expand...

That bedding style continued on the Stanley No.2 until the end of production in 1961.
Click to expand...

Oops, yes you're dead right.
You must log in or register to reply here.