I love the 60s styling of the Stanley 5803 hand drill. They also did a brace and chisels with the same theme and colour scheme. Seems to be a UK only thing not Stanley USA. 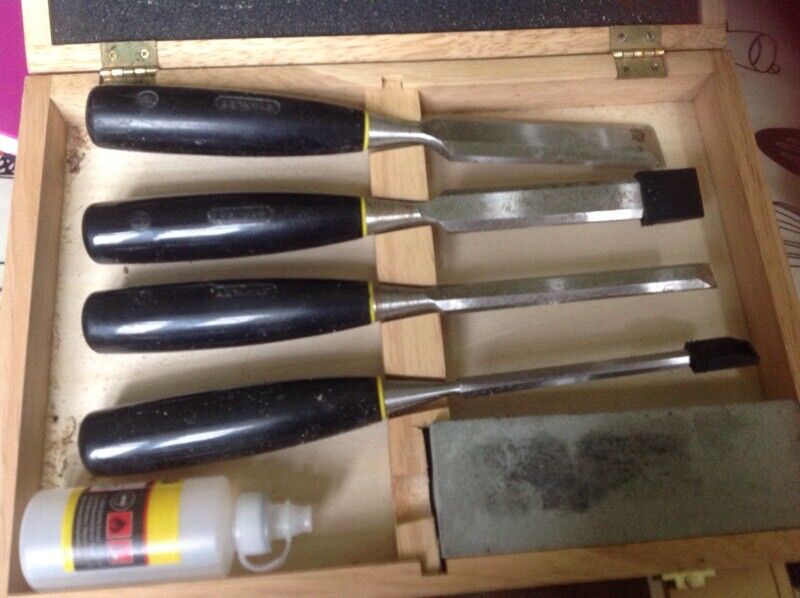 Did they do any other tools with the same styling, I cant remember seeing any screwdrivers for example that would match?

I have a couple of chisels like that with blue washers.
P

I have a 5803 drill on its way via eBay and already have a brace. Dont have any of the chisels though. Both the braces and chisels came with yellow or white highlights (I have a brace with white highlights) and you say you have blue as well. I wonder if they are indicators of different quality or just variations over time ? I'll have to check the model numbers on the braces.
B

Three Stanley (GB) models I have here, in addition to the previously mentioned white and yellow highlights also have one with black. They are: No 66 10in Mk 3 Black, 02-131 No 144 - 10 Yellow and No 73 E Mk 4 White.
When Stanley came to Australia in 1966 they brought their British rather than the American style braces, using the same model numbers as Britain with an A prefix. I haven't seen any A models with black highlights but have seen white and yellow. I have two A78 10in Mk 3 one white the other yellow so my opinion is that there is no significance on the colour used within a model range. I could stand corrected (hope to be, actually) on this though.
Stanley Aus' also brought out appropriate models in the 1970's when we went metric, removing the inch size and replacing with mm ie A78 250, 300 amd 350. All the metric ones I've seen are white highlights only.
Cheers,
Geoff.

I think by the 60tes stanley were already past the best quality wise even if the styling was good. Pity I was not aware of this fact back then.
Regards
John

Have a look at this old thread

It includes some photos from a 1966 Stanley book, which is a real treat for anyone who likes 60s style.

It also shows a yellow handled Stanley electric drill - has anyone ever seen or owned one of those?
D

Having a bit of a tidy up in the shed and came across this and remembered this thread.