Sporky McGuffin said:
I can post some pictures of some of the jigs if that'd be useful.
Click to expand...

Yes please. I understand what you are saying ( i havent used or even been near a cnc , but it makes sense )

Yep, as above, well done for including the warts! We all go through it at times!

When it goes wrong is when you learn. Probably!

It doesn't normally go wrong this many times.

I found a bit more! I wasn't happy with the pickup covers; they didn't quite match anything and I felt the pickups needed to be closer to the strings, so I made some replacement rings. First I made a jig on the CNC. The near bit has four 3mm holes, and I've stuck little bits of 3mm dowel in (actually, I think it was bits of a 3mm bamboo knitting needle). The far bit is less relevant at this stage. Each bit has a reference target. 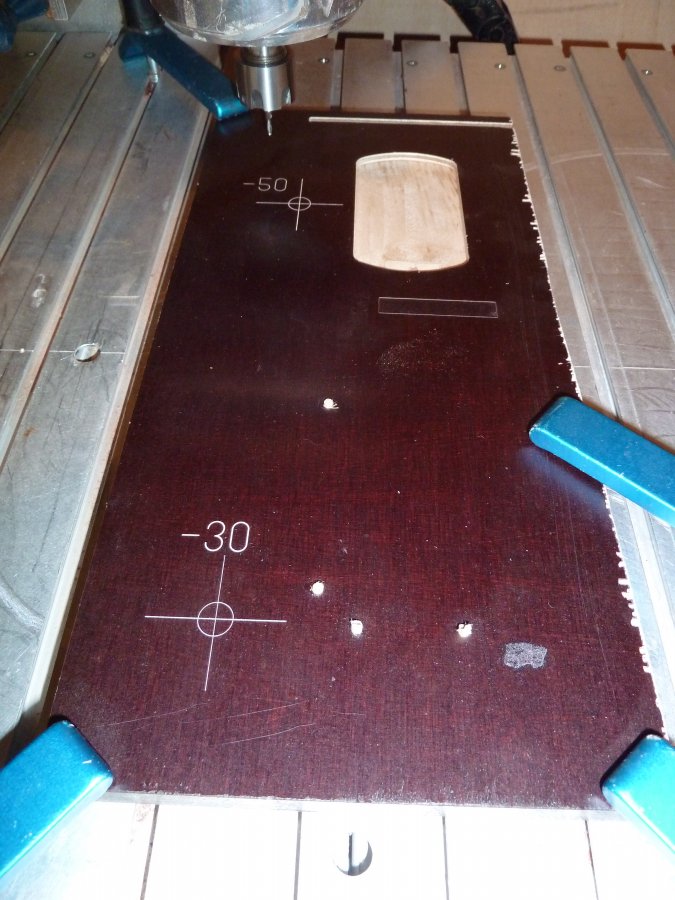 Next I fix a walnut blank to the near bit of the jig. I use golf grip tape for this - it's fiendishly strong, but peels off easily because it's a crepe paper tape. Lovely stuff. 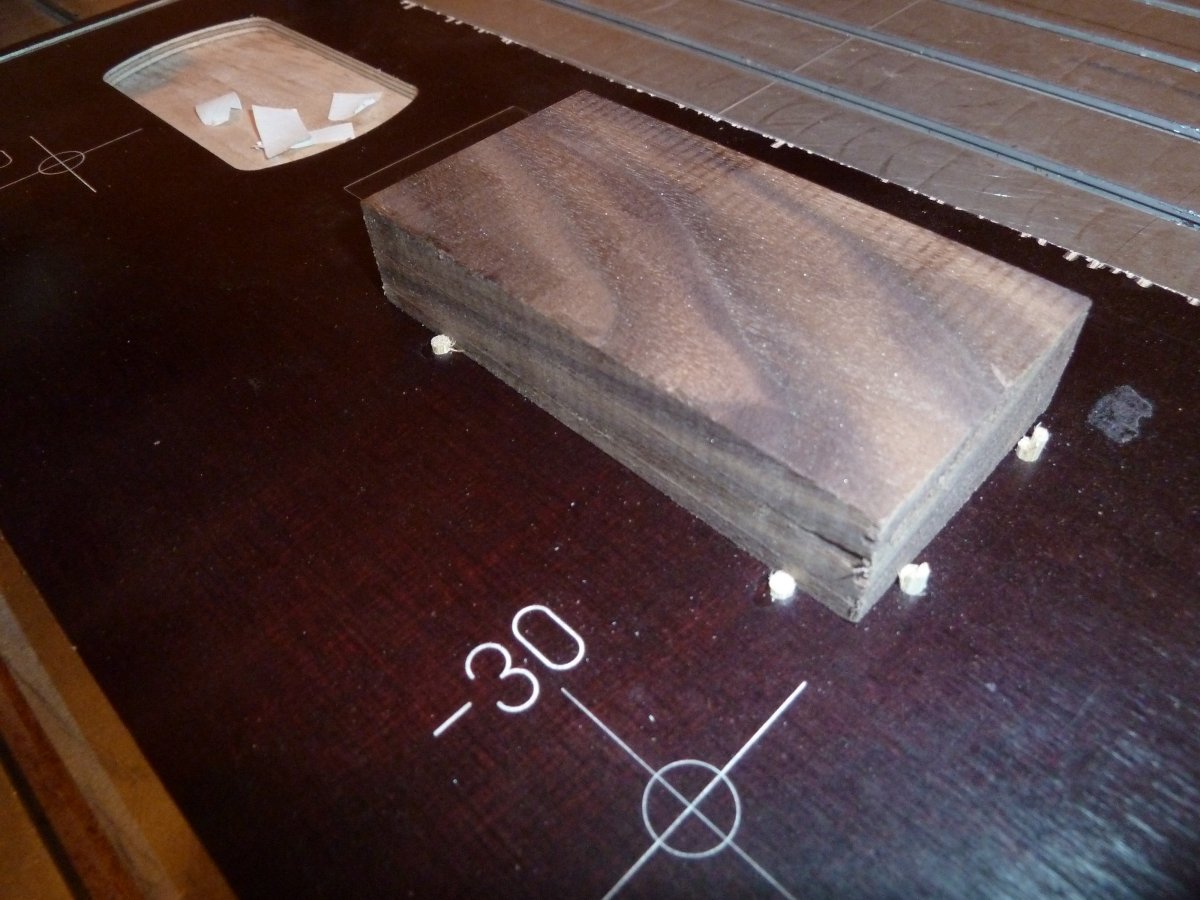 First the inside gets pocketed: 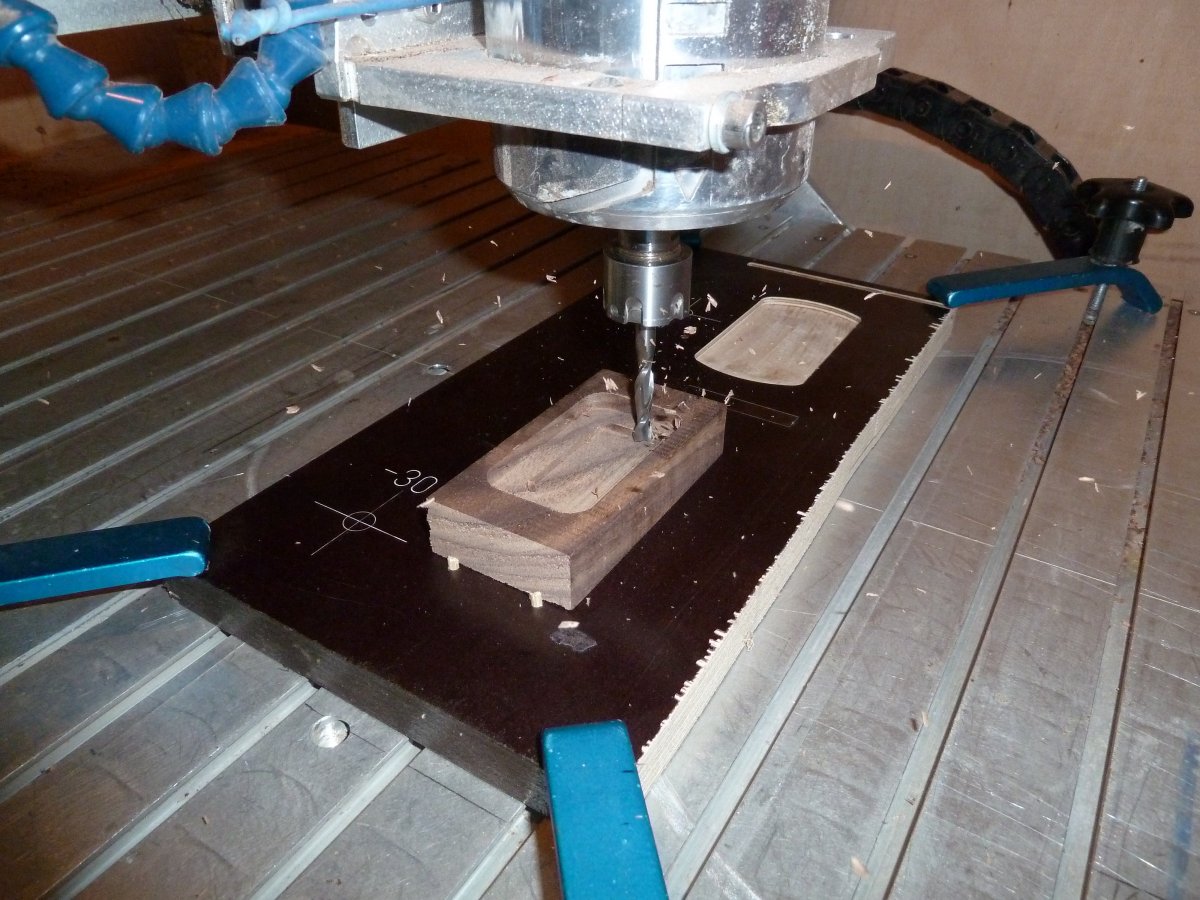 Then the outside is cut in several passes, then a single full-depth pass taking the last 0.1mm off. 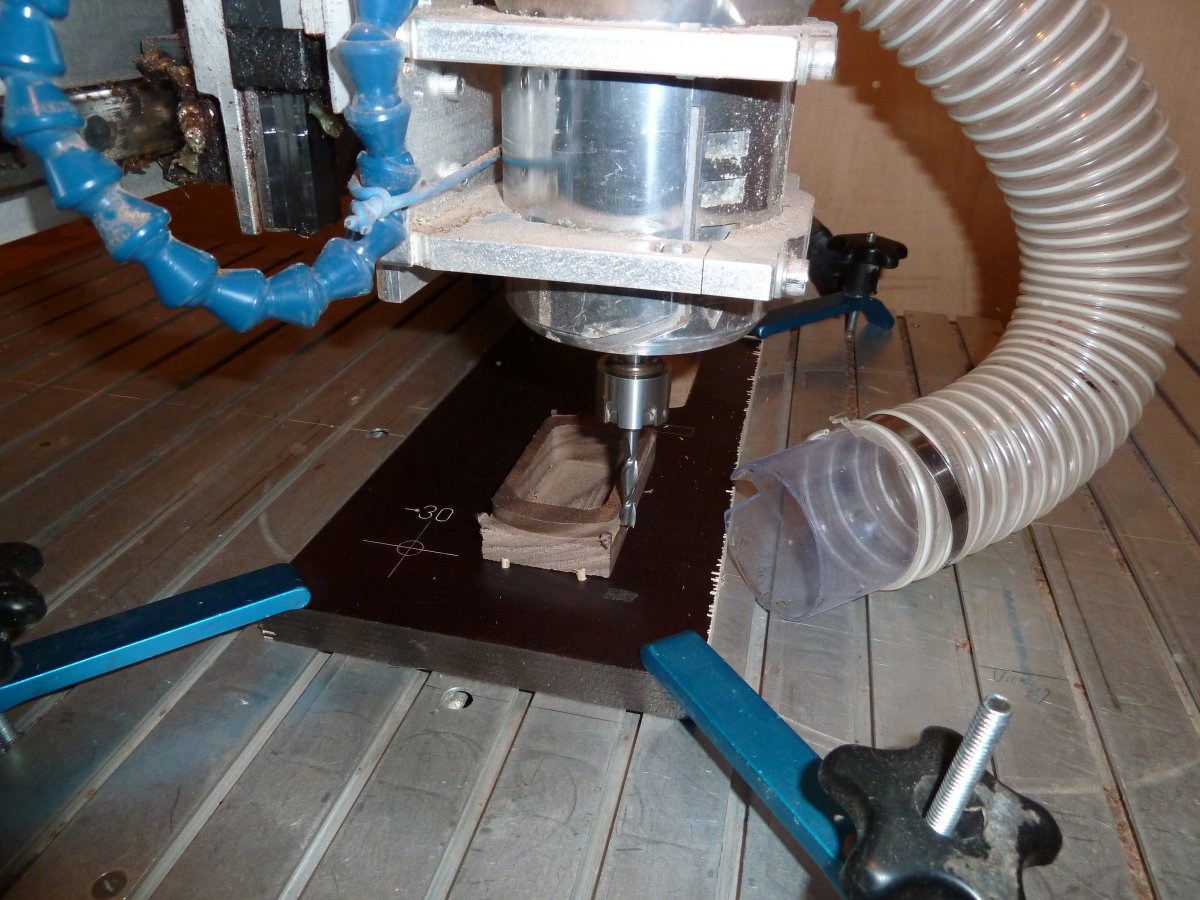 That leaves this, which is cleaned up with the bandsaw and router table, then resawn into two thinner sections. 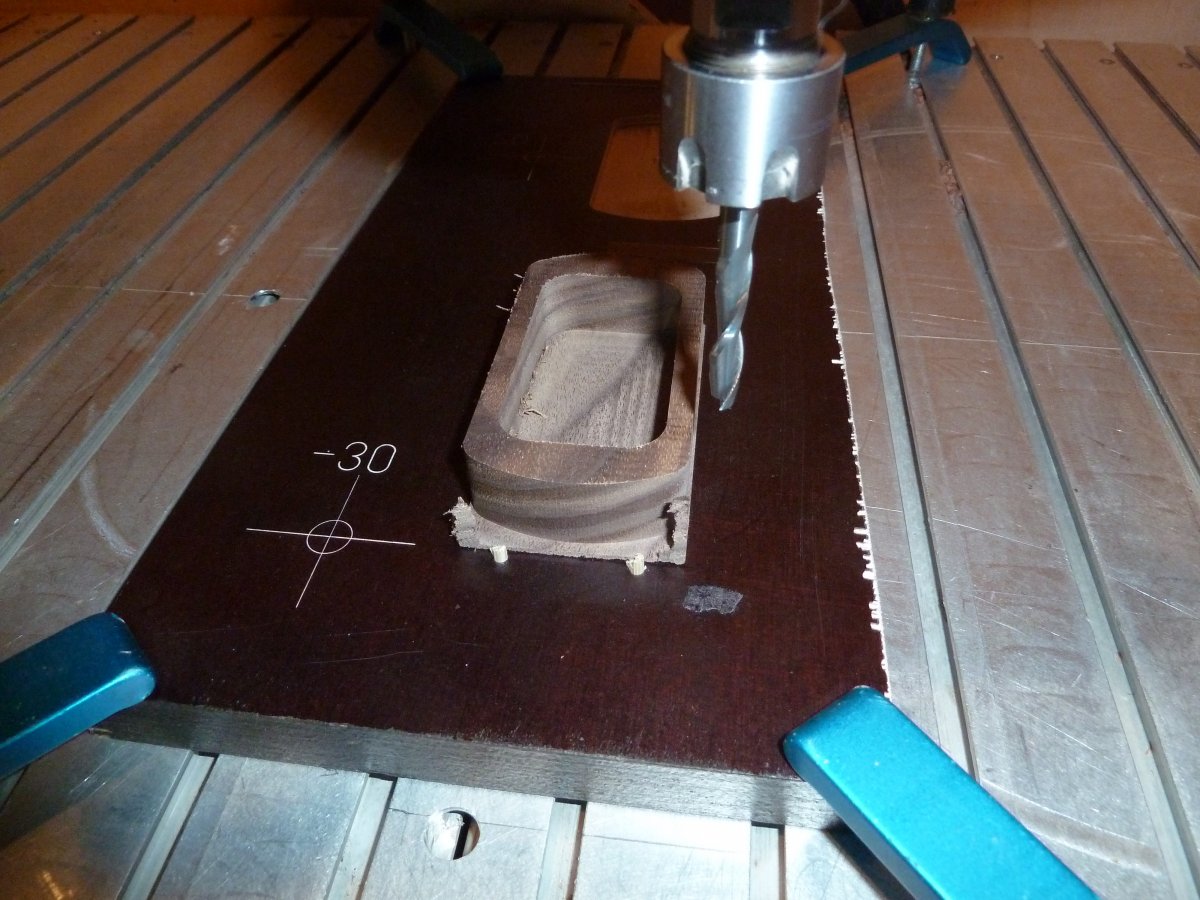 The cleaned sections go into the top bit of the jig: to be cut to exactly the thickness I want (I know how deep the pocket in the jig is): 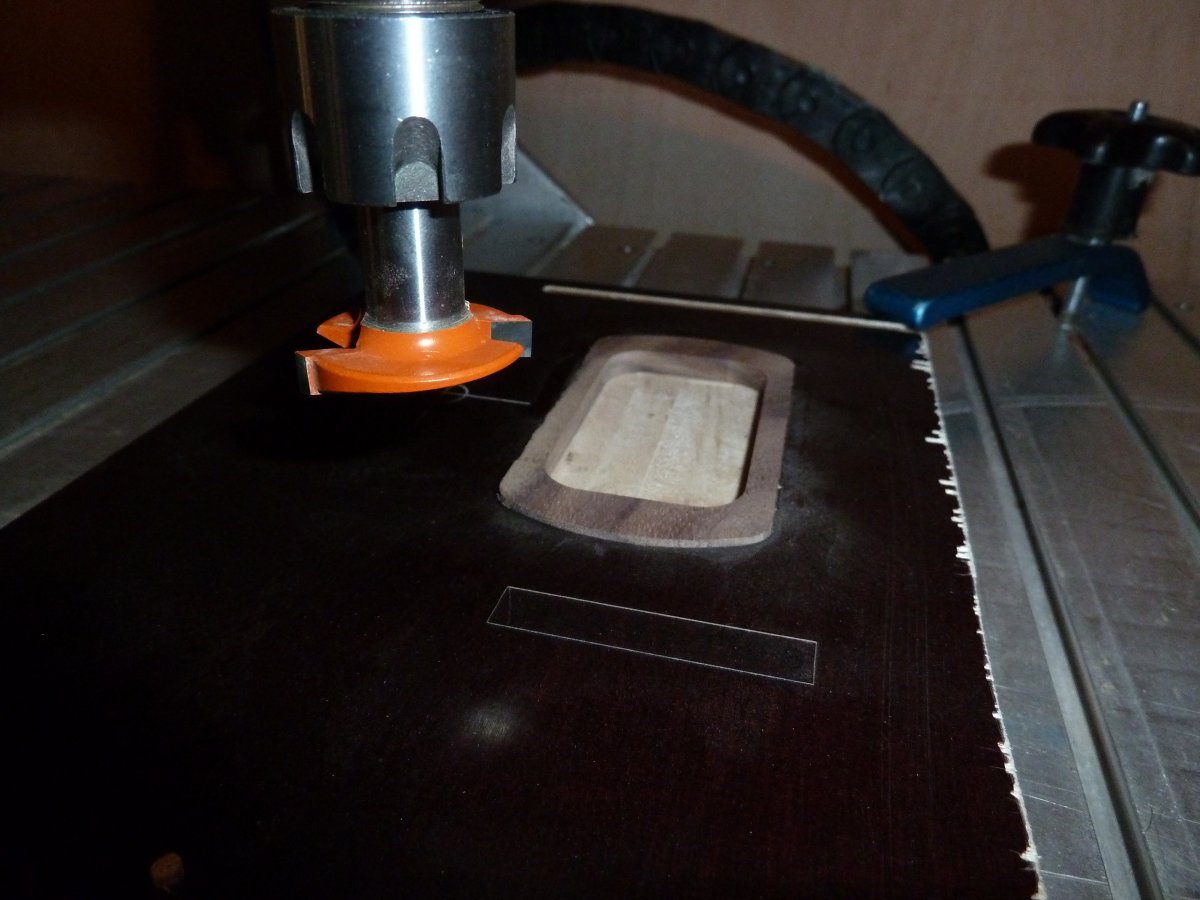 Then - sorry, no photo of this bit - the screw relief holes are drilled with a 3mm bit, and you have two rather nice pickup rings. 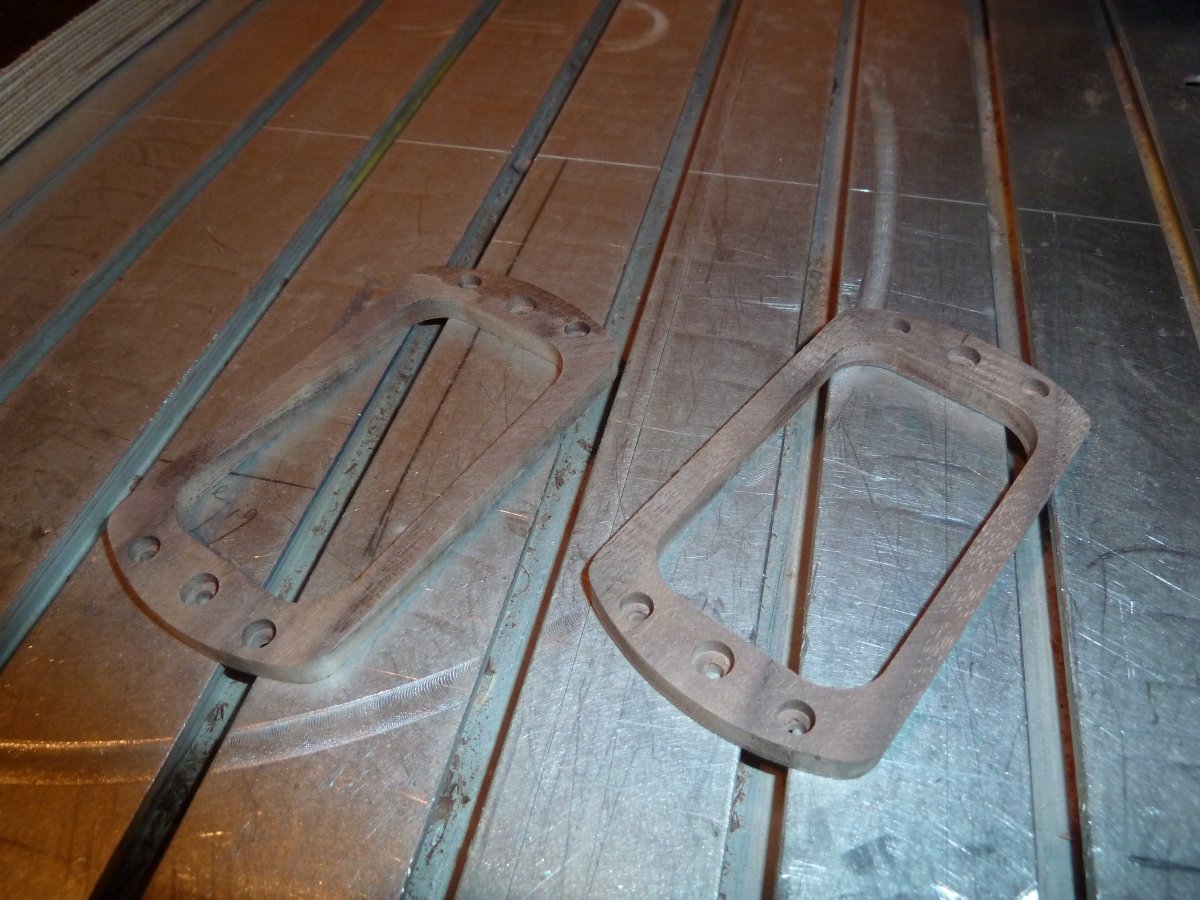 Strangely, nothing went wrong with this bit...
B

Ok, can you break down the cnc aspect a bit? For instance, do you use this for work? And in terms of cost, has it been good?

I havent gone into this stuff yet, but theres a ton of things i would like to do with one. I guess for me i would have to incorporate it into my work so it pays for itself over time.

The other thing is programming. I have no cad experience. I'd probably be rubbish at it

I am strictly a hobbyist - my day-job is designing audio-visual systems (and running a team of other designers).

My machine cost me £3k used about ten years ago, and came with the machine itself, a Bosch router, a handful of hold-down clamps, and a PC to control it. Since then I've spent about £300 on rebuilding the control box (the original caught fire!), about £100 on better hold-down stuff, and £400 on a new fanless PC. Plus fancy collets, some specialised bits, and so on. I have upgrade plans too, but they'll probably never happen.

There are loads of options for software, but generally you'll need CAD to design the thing you want to make, CAM to generate the tool paths from that, and machine control software to actually wiggle the router around.

I use Rhino3D because that's what the chap I bought the machine from used, and I get on well with it. That's a grand per version; I'm still on version 5, version 7 is out now. Upgrades are cheaper, as are education licences (I have a staff card for a university I do day-job stuff for; the Rhino people were perfectly happy to accept it). Then CAM software; I use MADCAM which is £800 per version, again with various discounts. Finally there's MACH3 which controls the machine, that's about £150, or MACH4 is out now for a bit more.

I'd think very carefully before buying one if you need it to pay for itself - it's completely doable, but you go from being a woodworker to being a CAD and CNC person, and it's not the same. I really enjoy it, but it's very different from taking a particularly good shaving with a plane, or turning a bowl. And there are loads of places that'll make you things from paper drawings faster and cheaper than you could do it yourself.
B

Fantastic looking guitar. I really like the choice of wood, there is something about wormy Maple, that for me, is really intriguing.

4 years!!! Hmmmm I must look through my wood shavings, you have reminded me that I'm sure I have a couple of projects that I got the hump with and chucked to one side.

baldkev said:
Lol.... no, that's not in my price range

Don't look at the grown-up stuff then! Free chap I bought mine from moved up to NX software at £24k per year, and a Doosan machine that was about £50k plus maintenance and warranty package. He wasn't using Silverline vices on a bit of ply either... There are cheaper options if course, and Sketchup is perfectly good for the CAD bit.


Alli said:
Fantastic looking guitar. I really like the choice of wood, there is something about wormy Maple, that for me, is really intriguing.

4 years!!! Hmmmm I must look through my wood shavings, you have reminded me that I'm sure I have a couple of projects that I got the hump with and chucked to one side.
Click to expand...

4 years isn't even the longest I've had a guitar nearly done!

The Ambrosia is amazing stuff; I'd popped into Surrey Timbers for a look through the scrap bin and there was a huge pile of it. This lump was just standing there, and Kevin went through the stack to find me another flamey bit. It wasn't even expensive!
A

Amazing! That wood is beautiful - you were right not to stain it.
You must log in or register to reply here.