I want a sit-stand desk for my study. I've used these desks in the past, and found them very therapeutic for my dodgy back. I'm not interested in the Heath-Robinson options of putting my monitor on a stack of books and so on. I'm after a dual-desk solution, as I can't deny my good wife the same options as me! Something like https://uvidesk.com/product/uvi-desk-double-frame/

I quite fancy building it myself, but I can't find a sensible source for the linear actuators needed in the legs. The only ones I found were very expensive, and much more than the cost of buying a completed desk. At the moment, the option above is my closest fit (I want a narrow desk, and this is the only one that goes down to 1m). They're in Slovenia though, so support could be a challenge.....
H

You could try these chaps:

shorten the travel of the expensive actuator and use a pantograph lift (scissor lift).

you could do away with the actuator completely and use a lead screw and driver, at which point you are in to the pennies rather than the pounds so to speak (40 quid a side maybe).

otherwise Ikea. someone in work has just been bought one (not for a disability, he's just short and fat thus has a bad back, but he has a doctors note), thin he's used it twice in a month.

Thanks for the advice all!

@harvestbarn - that's good out-of-the box thinking, but if I tried to bring something like that into our study, I'd be divorced on the spot!

@Jonathan S - I can usually find prices for Hafele stuff somewhere, but in this case I admit defeat.

@Steve_Scott - Yes, the Linak stuff seems to be the go-to solution for linear actuators. Again, I really struggled to find a price anywhere. I found one UK site, and they wanted about £400 *per leg*. So if that's representative, that makes Linak uneconomic. Regarding Ikea, yes, they're good, but I particularly want pillar legs, and that rules out most of the sit-stand desks I see.

@novocaine - I'm not keen on the look of scissor lifts, but I did have a look at them again. I still don't like them! Assuming your friend is actually at his desk for long periods, then he isn't doing it right - you're supposed to vary your position (sitting-standing) every 30 minutes or so. When I had access to one, I'd probably only change the height a few times a day, but I still found it beneficial (I have two non-functioning discs, so I can count the number of pain-free days each year on the fingers of one hand).
N

I agree completely that he isn't using it correctly. It was a massive waste of money spent by the company to keep him happy that he is now not using. give it another couple of weeks and I can see it being taken from him and given to someone else who will actually use the damn thing. having worked in Denmark where they are the law I love the idea and found it to be great.
The issue with linear actuators for desks is they have to withstand a surprising amount of lateral and longitudinal stress, to do that means they have to beef up the shaft and the motor/lock out. this costs money I'm afraid.
R

There are stacks of linear actuators on ebay, all fresh from China, but cheap at least.

Would these fit the bill?

find a couple of thrown out treadmills

I had a look at the actuators on eBay, but they're mostly bare-bones, and I suspect building a desk from these would require a fair bit of engineering. I wasn't convinced that I wouldn't end up paying more than buying a desk off-the-shelf (although of course, the process would be fun). There is one set of four legs on eBay which would be ideal, and I was seriously tempted, but they look a bit industrial, and I'd still need to buy a few bits, and again the price would be up to or more than a new desk.

Anyway, I've just pushed the button on the desk I mentioned in my OP. Let's hope Slovenia comes through! Now I need to get cracking on my oak top....
M

I think you've done your due diligence. Linear actuators are fairly expensive things and if not bundled in a system, need a fair bit of engineering. For example, the cheap Chines actuators probably work fine, but really need three position sensors and feedback to keep them all in sync. It would be messy if one corner of the desk went up faster than the others. The mechanical leadscrew solution (four of them and a chain, as in a lunchbox planer or router lift) also needs a fair bit of engineering, and a hand-driven one would be very heavy to lift.

Very interested to see the solutions that others have suggested. I covet the converted hospital bed!

Do keep us posted with your desk as it progresses, with pictures!

I thought I would update on the results of my activities. Firstly a recap. I wanted a sit-stand desk for my study, plus one for my wife. Most are 1200mm+ wide, and I didn't want the desk to dominate, so needed one 1m wide (in black). I eventually found a manufacturer (in Croatia! with no reviews!!), and having bitten the bullet, I duly ordered it. To my relief, it turned up on schedule, excellently packed. 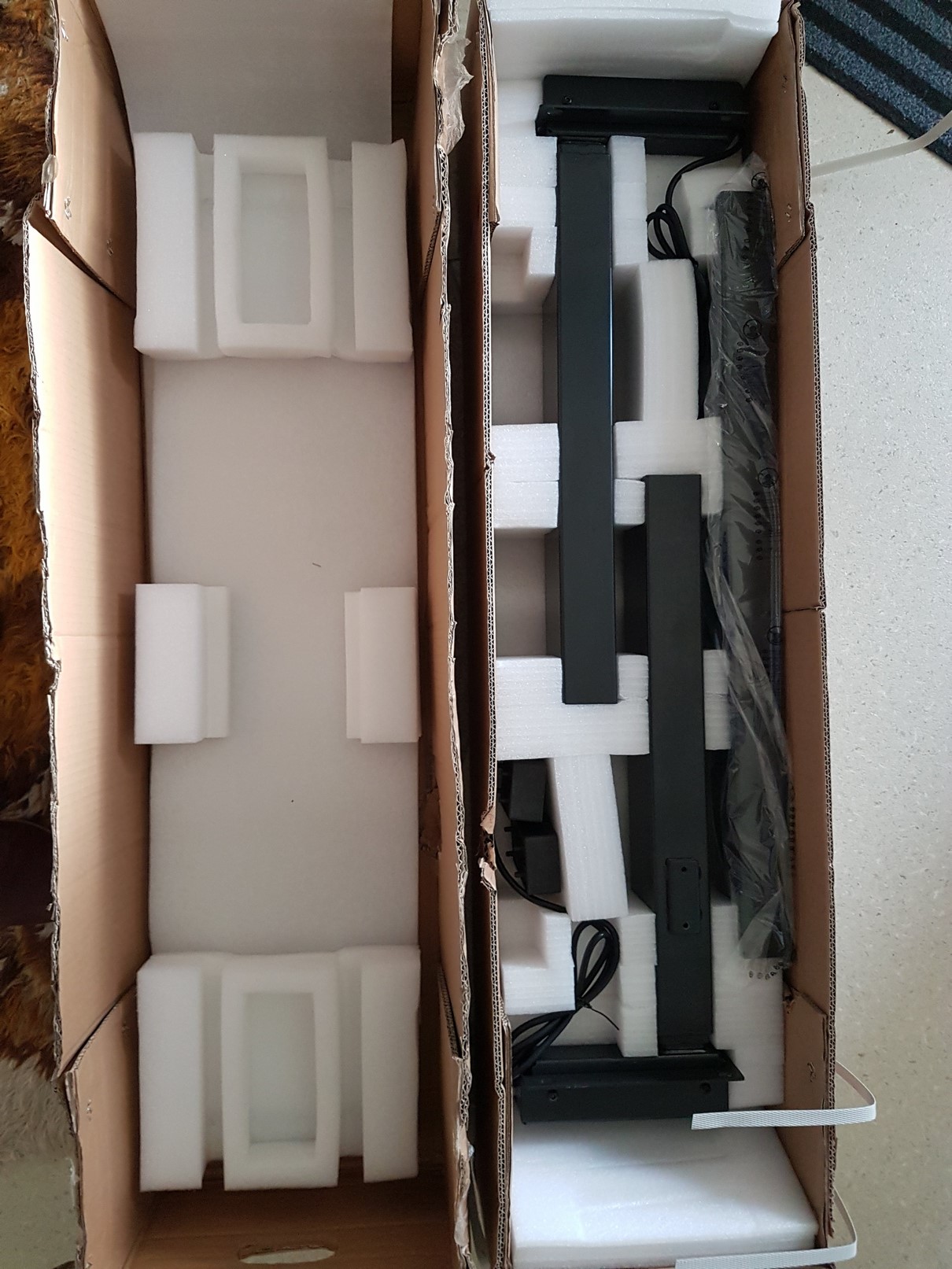 Putting it together was child's play, so I just had to make the top (25mm oak planks, 180mm wide, x4 for each top). I put a 45 degree bevel on three edges (using the tracksaw - I normally edge using the router table, but these tops were just to unwieldy to handle). A couple of holes (one for the monitor arm, one for the cabling). some sanding, and three coats of satin Osmo, and they were finished. Here the test fit. 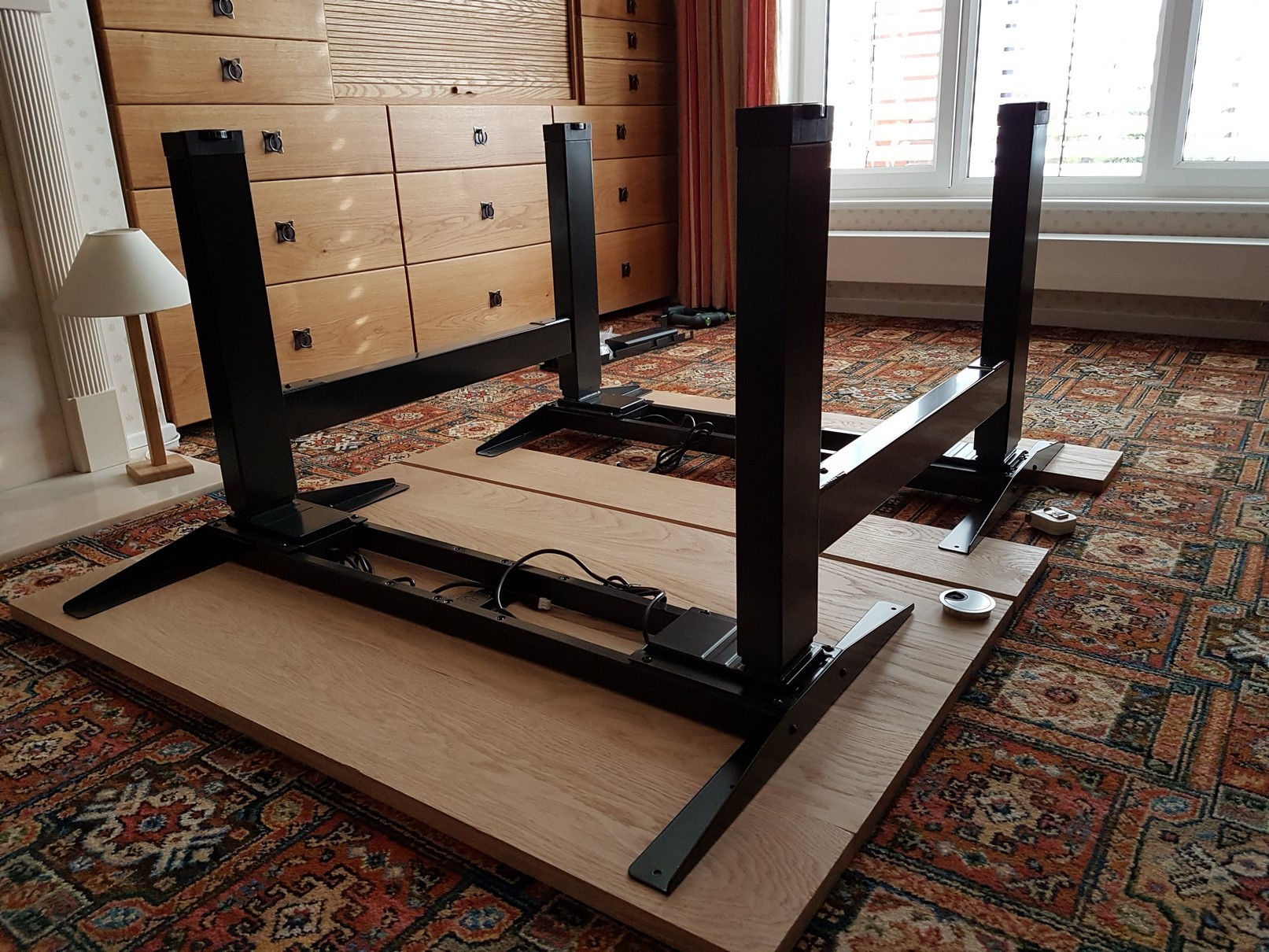 The slowest part of the work was getting the cabling installed neatly. I had to add a panel on the non-rising frame for a mains extension block. 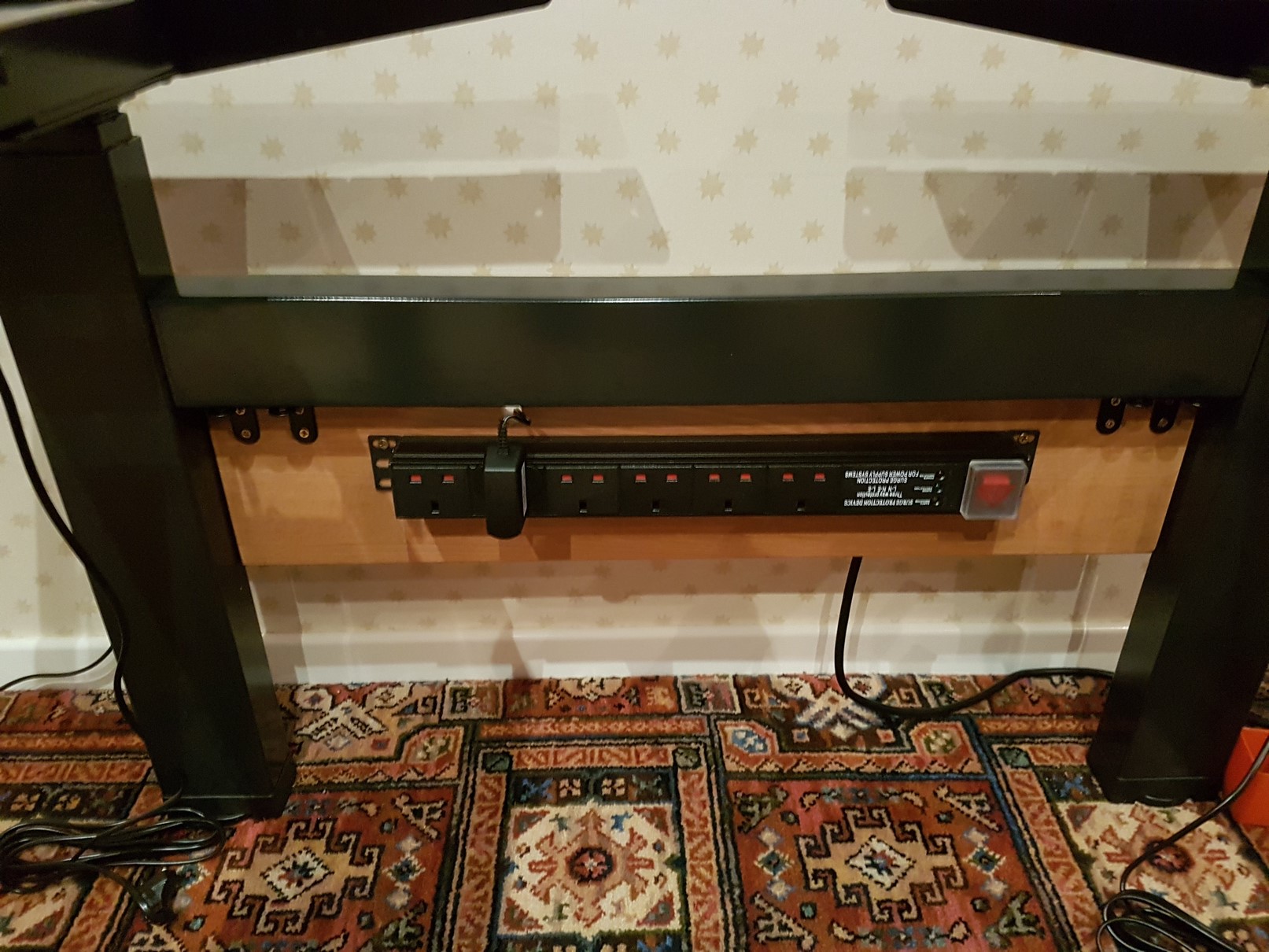 This extension block feeds two extension blocks fixed one under each (rising) top, with coiled cables enabling stretching as the table rises and falls. The panel also carries a small ethernet switch, again with one cable running to each computer. I would have liked this to be coiled, but such things don't exist in the length I wanted, so I settled for short cables which I made myself. One may I might coil the cable, but for now this works fine. 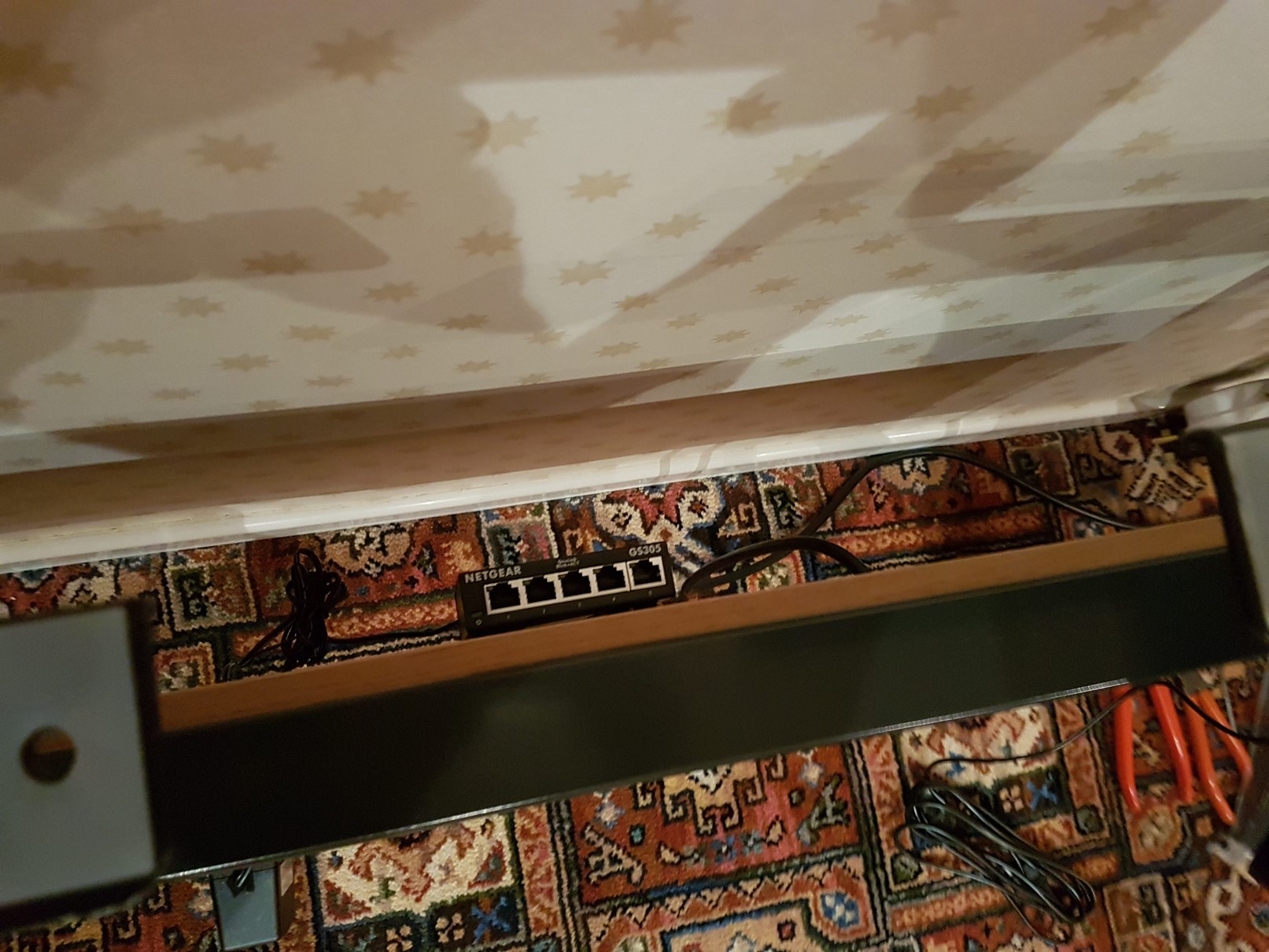 The computer CPUs are mounted vertically to maintain knee space under the desks. I considered making some frames myself, but in the end I thought that metalwork was more compact, neater, and easier to maneuver the CPU around in. Note my cases are very slim, so I needed some neoprene packing between the case and clamping arm. Incidentally, my computers have no moving parts - the case is designed to act as a heatsink, and the disks are SSD. You can also see the small enclosure (x2, everything is x2 on this project) to hold the PSU for the computer, fixed to the underside of the top. 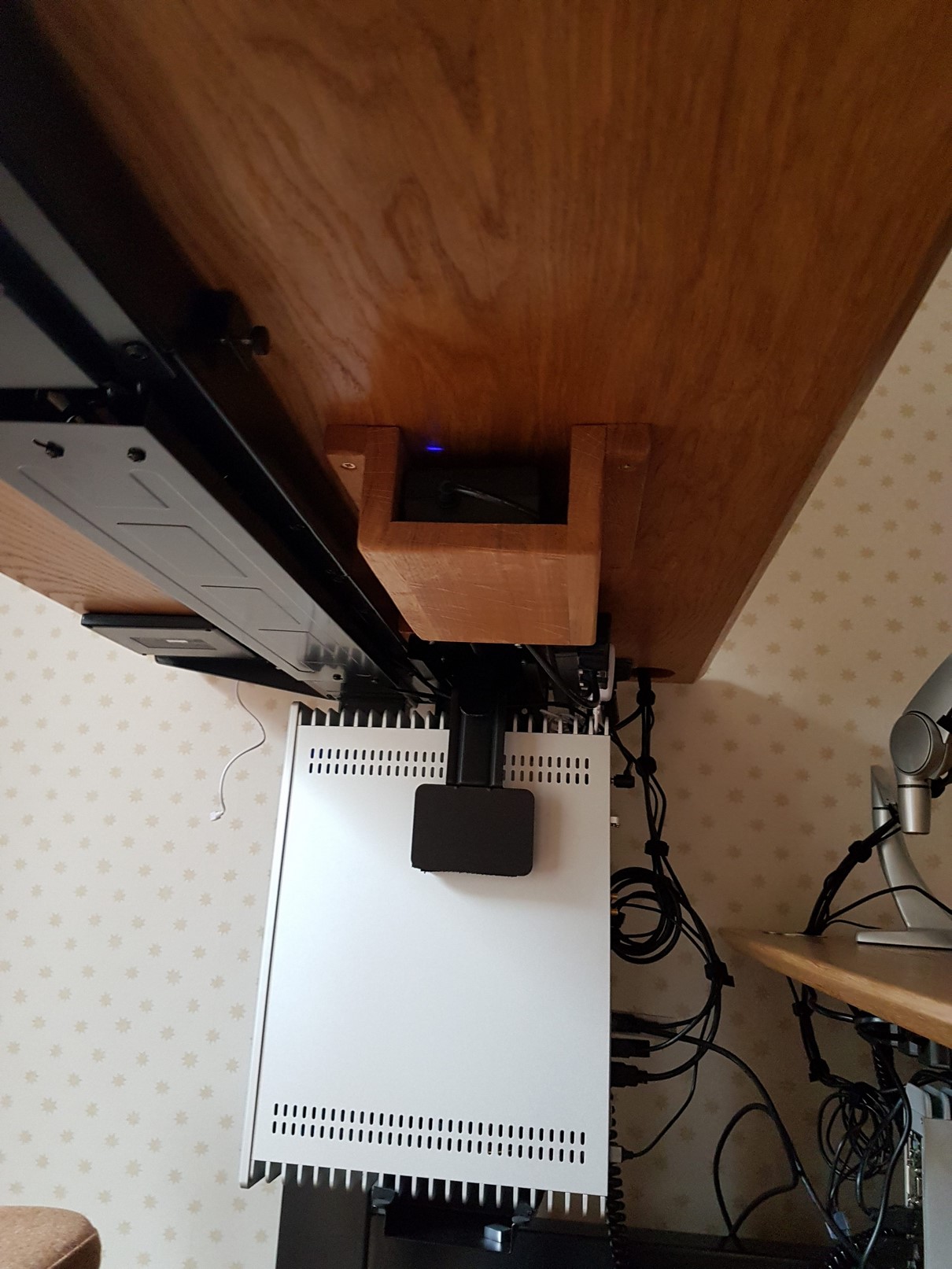 The final installation is tolerably neat (as it ever can be with the nest of cables around a pair of computers), and with the over-monitor LED lights, I'm really happy with the result. It is very pleasant to be able to change one's position while working at the computer, and almost certainly better for my dodgy back to be able to work standing occasionally. With the monitor arms, it's possible to swing the monitors back against the wall very easily, providing a large flat surface for any other purpose. 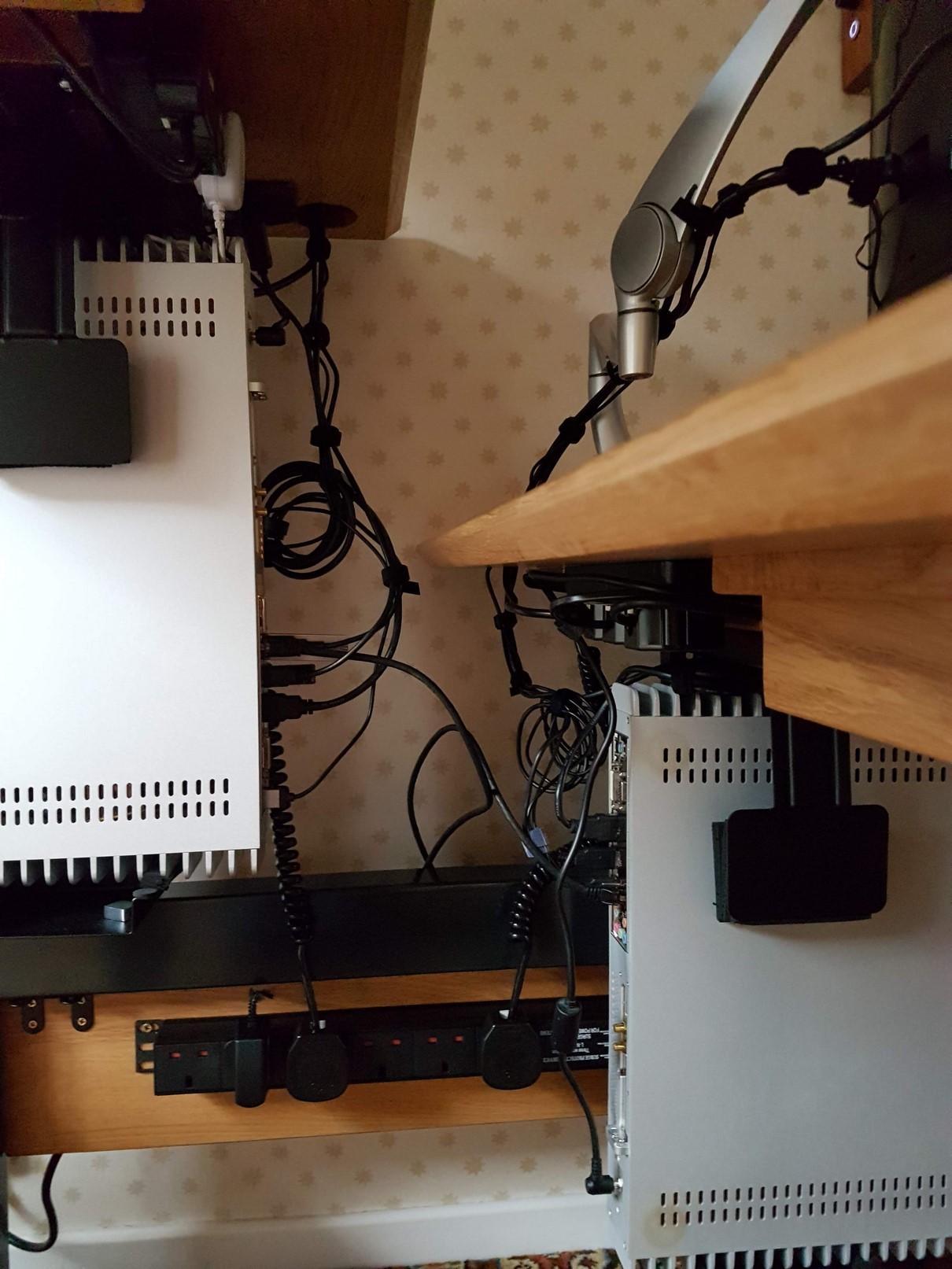 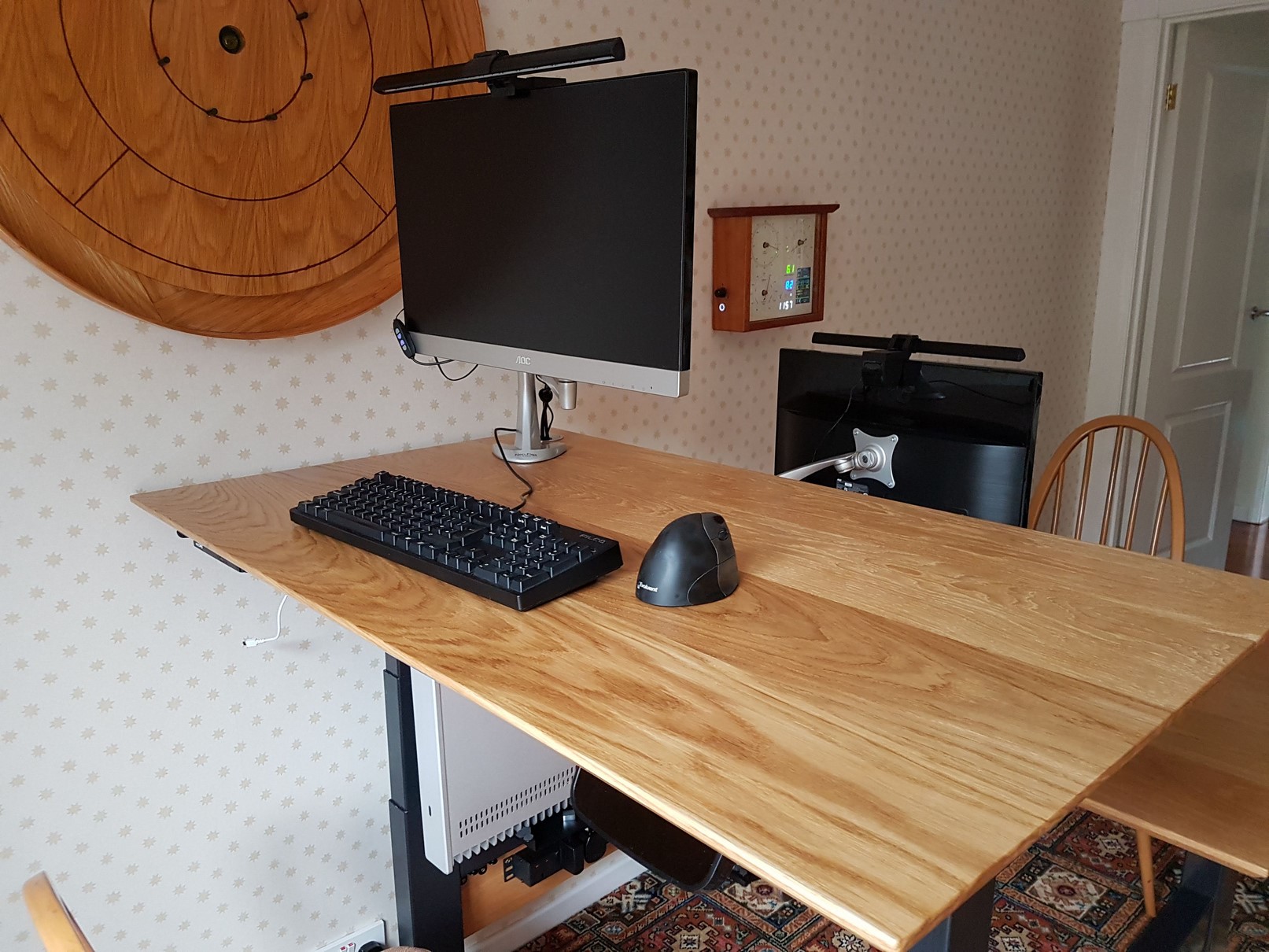 looks fancy! do you have a link to the actuators you used?

I bought my frame from https://uvidesk.com/product/uvi-desk-double-frame/