Hi all, finally got round to having a go at mortice and tenons. I bought a small offcuts oak hobby pack from British Hardwoods, and after having a route through it I reckoned there was enough decent wood to make a small picture frame. I don't have any dimensioning machines (yet ) so it was all done with hand tools. To be honest I don't think I would order the hobby pack online again, but rather go and pick some up myself so I could be a bit more selective, though I know they were offcuts, but I found even on the pieces I used that there were a lot of deep cracks through them, so I had to be careful that they didn't completely split. Or is this just a normal thing for oak?

Anyway, the only teaching I get is from YouTube and this forum, so forgive my beginner ness :lol: So I started by dimensioning the pieces, which Ive done before so this was ok, and took a little less time than last time which was good. When chopping out the mortices though I found it a bit frustrating because I had to keep going back to the waterstones and keep sharpening the chisel, and to be fair they were not the neatest!

Just out of interest how often do people find they have to sharpen their tools, I can't imagine making a big project and spending more time sharpening than anything else, or is this normal so I should just get used to it?? (or splash out on a decent set of chisels )

I did get my self a nice router plane, and so after a few wobbly cut lines on the tenons I used it to trim the first one down and then I was ready to test fit my first ever proper joint I was immediately disappointed when I saw the size of the gaps that were there, even though the joint felt pretty tight. I was determined to make the next one better so I concentrated hard when cutting, and didn't trim the tenon as much. When tapping the tenon in I thought yes, this looks better, and then 'crack' :shock: pipper, more frustration, not enough trimmed this time!

Any way, I carried on and got the other 2 finished, both still a little gappy but it came out ok ish, slightly out of square due to a little more paring on the shoulders needed, but after this it was not far off being bob on. I then used the chisel and router plane again to cut out a rabbet (or is it a rebate?) for the glass and the print to sit in. I ended up cutting this very slightly too big as well so it took a bit of lining up to get the print sat nicely, but I got away it. I gave it all a quick plane over the joints, and then had a go at filling the gaps with a bit of a sawdust and glue mixture. This made a big difference so I gave it 3 levels of sanding, including rounding all the edges slightly, and finished it off with 2 coats of matt osmo.

In the end, after feeling disappointed that I couldn't cut the most perfect joints, I looked at this very simple bit of wood work and thought it looks alright, I'd of paid for that. And I'm loving the fact that I made it from a pile of cracked offcuts! It now hangs in the entrance of the house so it'll be the first thing any one see's when they visit.

Sorry for having a big rant with this, and thanks for reading if you've got this far. If anyone is interested the print is from Pepper Pot Studios, didn't cost a lot and they do all the other counties etc. 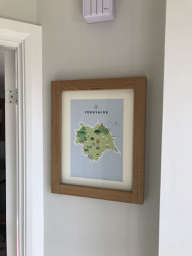 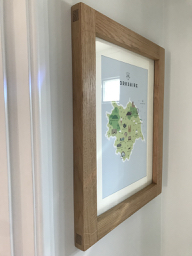 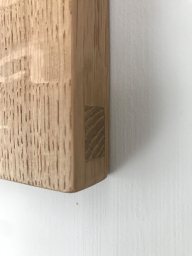 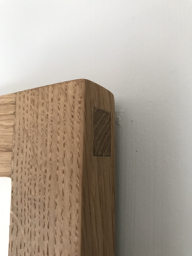 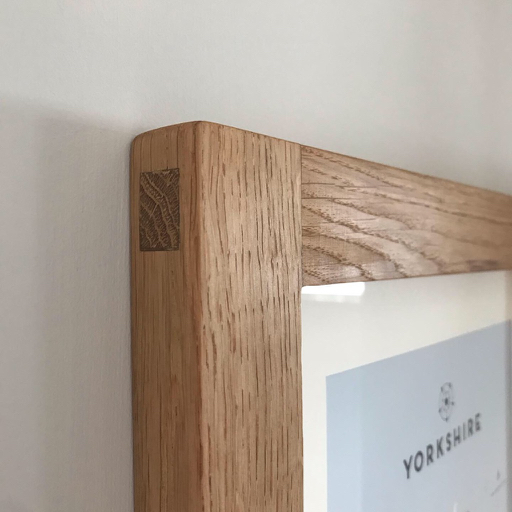 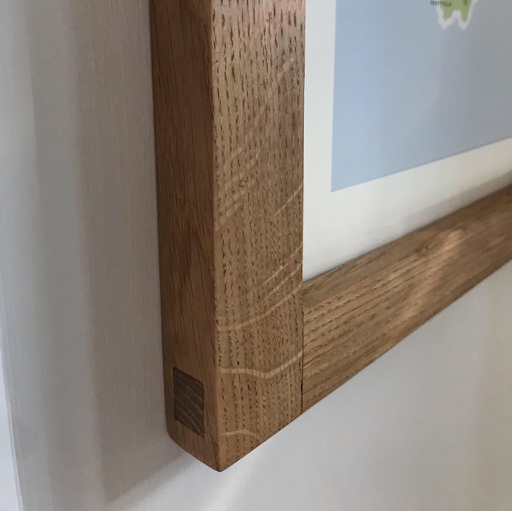 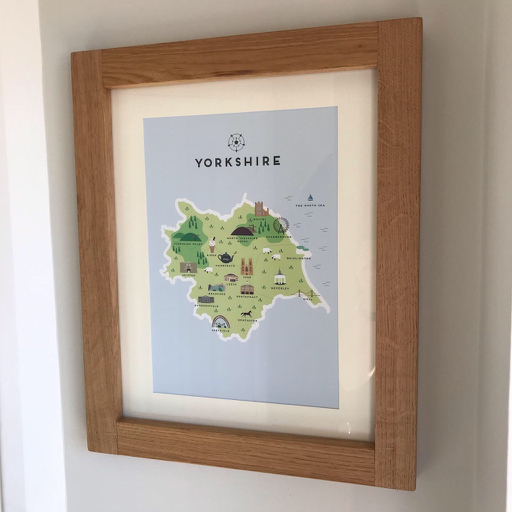 that's a really well made, high quality frame, like it a lot and the quality of oak is high grade, you should be proud of it =D>

Well, I couldn't be more pleased. A newcomer to woodwork actually doing proper joints, which is something many more experienced people don't bother doing any more. They look pretty damn good to me.

You'll have learnt that the setting out is crucial, as is the accuracy of the cut of the shoulder line. What you may not have picked up on yet is that what happens below the shoulder line is much less important, and that top quality craftsmen for hundreds of generations have undercut shoulders where they aren't seen. Also, the entry end of the mortise doesn't have to be perfect.........it's the exit end that counts. Did you leave your tenons over-long, with a rough chamfer on the end, then cut them off flush after gluing?

As for your chisel question.......I assume you only used a couple of chisels, doing most of the chopping out with one, and the paring/ final clean up with a bigger one. If I had started with sharp tools, I doubt I would have had to re-sharpen at all during the cutting of 4 M & Ts, but if I did, it would only have been once for the one that I used for chopping out. I suspect that unless you've got some really dodgy steel your sharpening technique isn't yet spot on. Don't worry, that'll soon be second nature.

Anyway, congratulations again on an excellent first project. Oak isn't easy to work with, so you've done really well to get such a nice result.

Yes I agree, that’s a great job. You’re being too harsh on yourself, I’d be pleased to have that hanging on my wall.

Re sourcing timber, every time you pass a skip, stop and have a look. It’s amazing what you can find. I’ve just made a small table using tulipwood for the frame (painted) and a 30mm pine top, all from a skip.

It's not just wood. My best chisel and my block plane both came from a skip.

That’s right lovely, well done. I look forwards to all your future projects

Looks like you are in Yorkshire, I am based near Selby. PM me if you are not too far away as I generally have offcuts in workshop you could have that would do for small projects.

It really is so satisfying, isn't it?
You've made a good looking frame, just the proportions you want, and learned some real skills that you will use on every future project. Well done.
Also, small things like this are great when you are starting - you've not got hundreds of pounds worth of premium timber inviting you to make a mistake!
W

Nice job on that frame. If I could suggest one slight improvement for your next pic, I'd leave a fraction more at the bottom part of the card mount; no more than 5 or 10mm. This gives the pic some visual 'weight' but for a first attempt at framing a pic, it's nicely done.
If you have something special I'd also recommend 'clarity' non-reflective glass. 'Museum quality' will cost you an arm and both legs but the stuff I use cuts out about 80% of the sun's UV and prevents the image from fading over time. For a pic that size expect to pay around £20+ for a piece of 'clarity' glass; expensive but worth it - Rob
B

Sharp eyes for attention to detail and sharp tools; proper sharp!
Nicely done Callum. You have a reason to feel pleased with yourself.

I would be chuffed with that if I were you. Well done!
A Mortice and Tenon jointed picture frame is not seen vey often, at least not by me. It looks just fine. Well done.
By the way British Hardwoods have a 'scrap' bin to filter through, last time I was there £1/Kg.
xy
C

MikeG.":244jk4eu said:
What you may not have picked up on yet is that what happens below the shoulder line is much less important, and that top quality craftsmen for hundreds of generations have undercut shoulders where they aren't seen. Also, the entry end of the mortise doesn't have to be perfect.........it's the exit end that counts.
Click to expand...

So true Mike. When I was learning how to fit joints from seasoned joiners one of Jeff's favourite sayings was 'never let the back wood stop ya' inexperience would leave me baffled, but a few wiggles from him would quickly show me where I went wrong.

Thanks everyone, some nice comments and tips in there
The mrs has another print in a different frame so I’ll have a go at making another one. It is a good hobby this isn’t it!

Just a tip for the next one, Callum. Make the outside shoulder wider, and the inside shoulder narrower, to move the mortise further away from the end of the stiles (verticals). This will leave you a bit more "meat" to play with. In fact, it's best if you cut the mortise with the wood over-length, so that prising out the waste, and trial fits, don't threaten the short grain on the outside end. Then you can trim to length once everything is finished. Cut your shoulder lines with a sharp knife, and sneak up on those lines as you remove the waste, and you'll not have quite the fight with them you had this time.
B

Callum I'm not sure if anyone mentioned this but the bottom border of a mount board is usually about 4mm wider than the other three sides which are equal. It just gives a little bit of balance to the appearance of a mount in a frame. Just a tip.

Benchwayze":1gsefhbl said:
Callum I'm not sure if anyone mentioned this but the bottom border of a mount board is usually about 4mm wider than the other three sides which are equal. It just gives a little bit of balance to the appearance of a mount in a frame. Just a tip.

Agreed John, I mentioned that earlier, but I tend to leave a bit more than 4mm - Rob

I can't offer any advice sorry.
Being a woodworking novice myself I don't think I could do what you have done.
Like others have said stop being too harsh on yourself you have done a great job.
B

Rob. Totally agree with what you said. The problem is I'm not overly familiar with millimetres and I normally make the difference a quarter inch. Which is the larger I don't know without looking at the rule!
As it happens a member of the Art Group I belong to is an expert framer so the solution to my framing needs is obvious. :mrgreen: