I don't make planes for pay, but once in a while, someone will have something that I wouldn't mind having and propose a trade. In this case, they just wanted me to refit some of their planes, which I did, and I told them that I hadn't made a plane in probably a couple of years now and I wouldn't mind making a few to make sure I don't forget how (not inclined to watch my own videos...that's for sure).

This is a 15" jack plane that I'd normally make in 17" length, the latter proportions in general that I found on my favorite mathieson jack plane. 2 1/2" ward iron and matching cap iron.

American beech, of course. I'm running out of american beech, but there are a lot of beech trees growing here that just age out and fall over. At some point, I hope to get access to cut a section out of one of them just as it falls (it spalts right away)...until then, I have some euro beech, but euro beech just looks cheaper and more common.

Last picture is after oil. 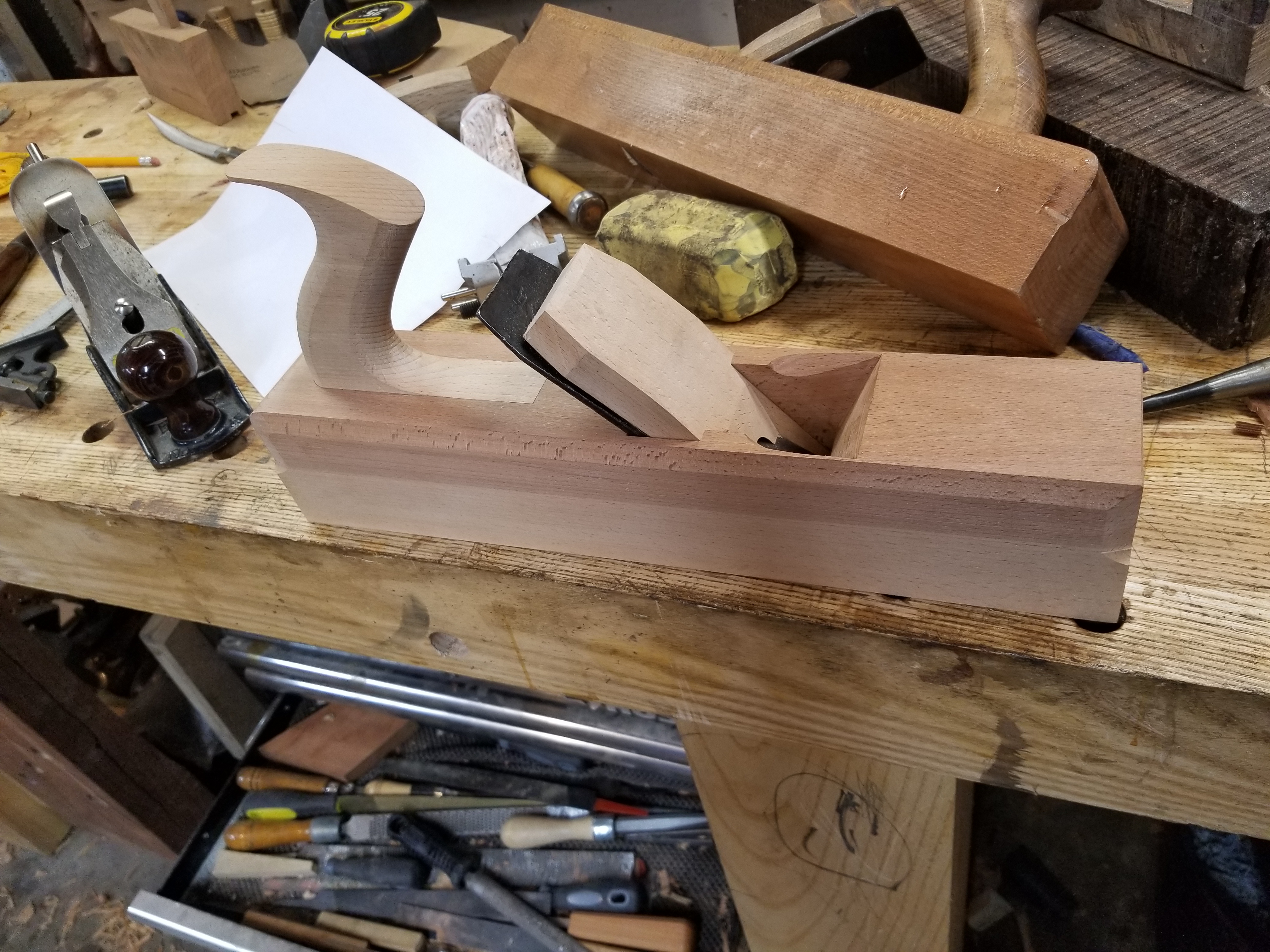 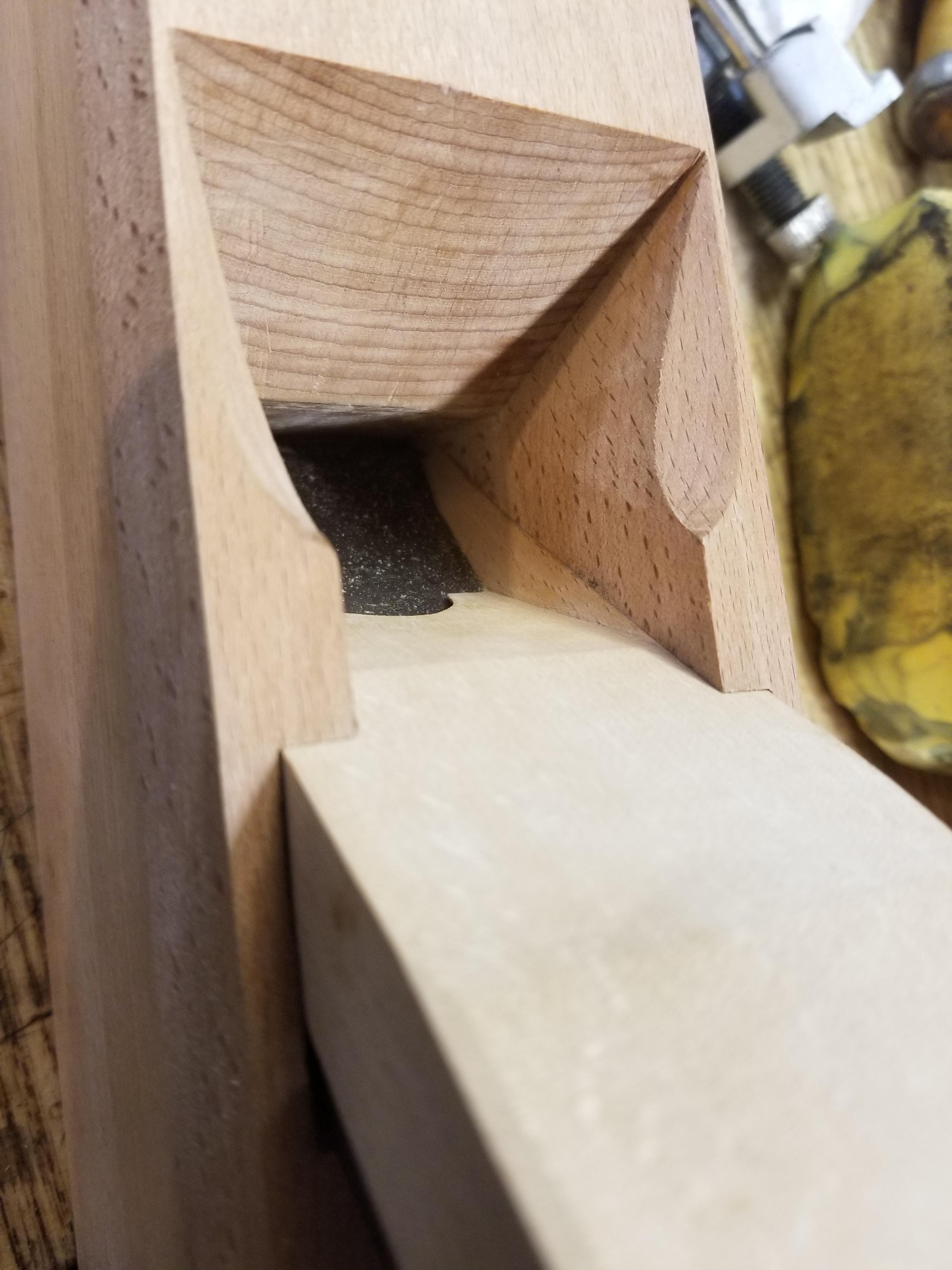 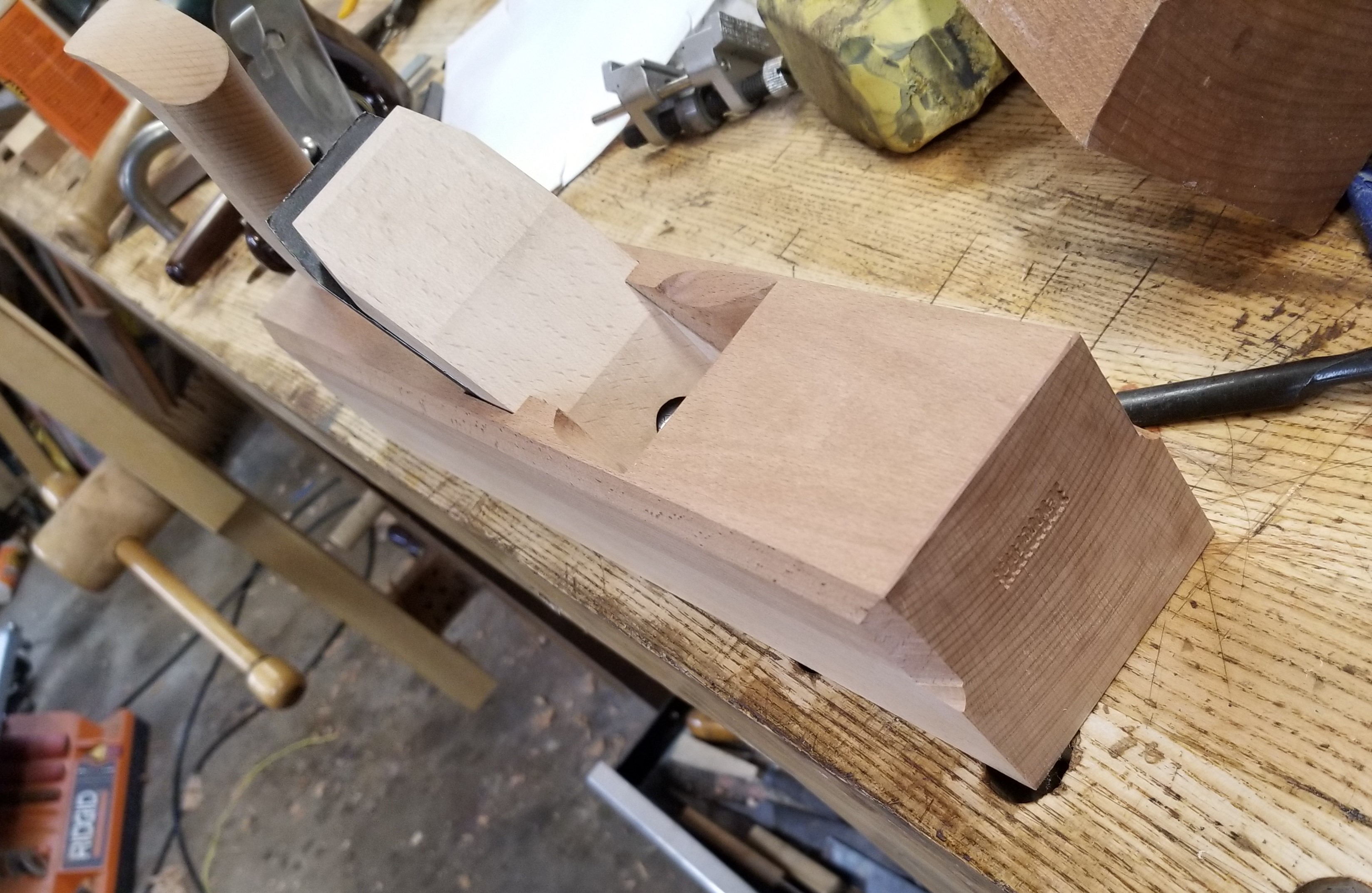 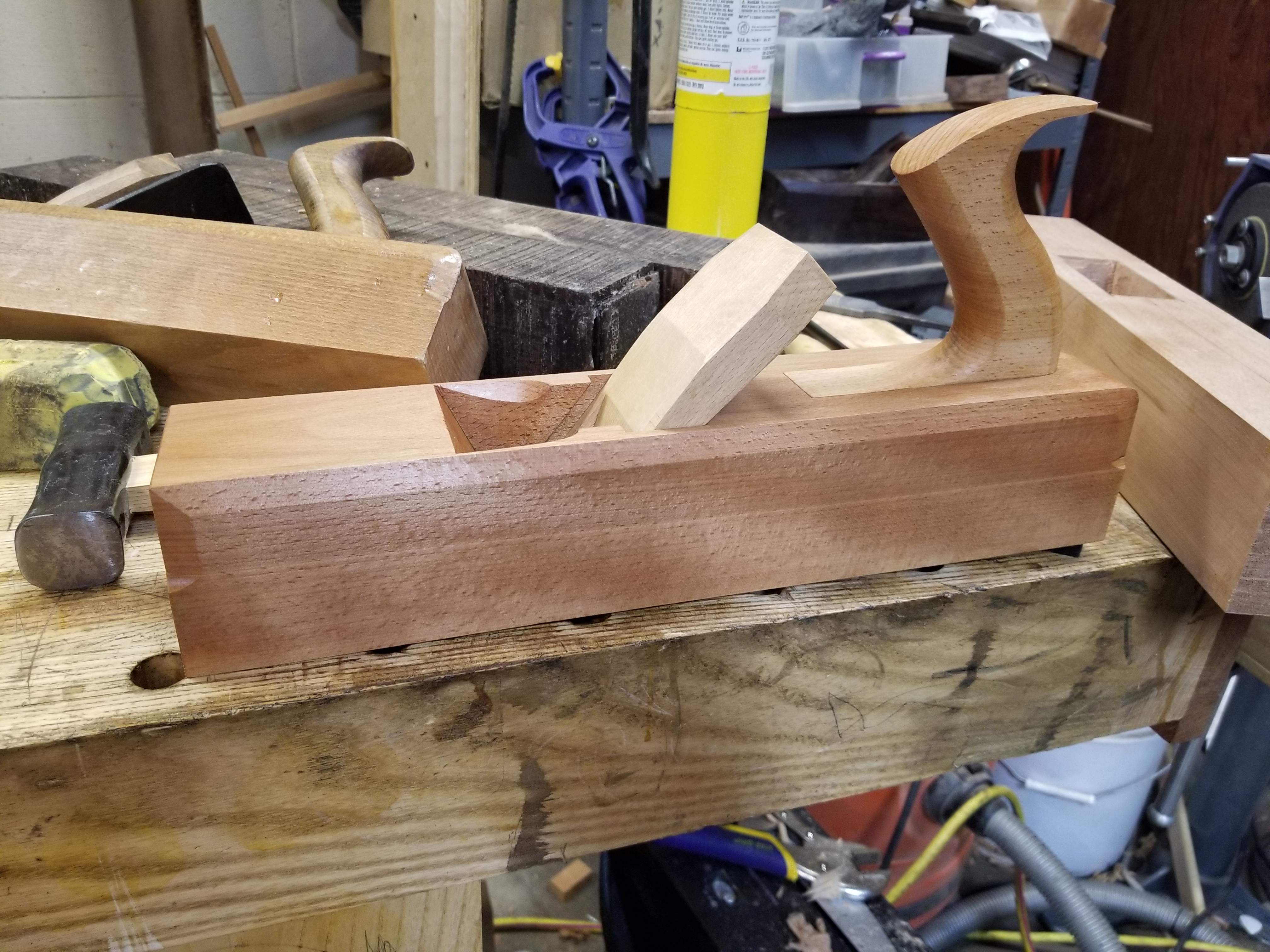 I think you've got the hang of this planemaking lark! Nice neat fitting in the throat, well chiselled mouth, symmetrical eyes, lovely stops to the vertical chamfers on the toe.
T

That does look very smart and well executed.
D

AndyT":2k8p2vmr said:
I think you've got the hang of this planemaking lark! Nice neat fitting in the throat, well chiselled mouth, symmetrical eyes, lovely stops to the vertical chamfers on the toe.
Click to expand...

Thanks, Andy - my objective is to make a plane as an amateur that nobody will spot as being made by one.

The bits and pieces aren't really all together in any other planes, so someone may look at it and say "chamfers - but bigger than traditional english...gouged stops....OK, no roundover. Inside is unmistakably 1800s english....

..the one giveaway is I filed my own maker stamp out of brass and chiseled serifs on the letters. Most of the maker's stamps that I've seen are checkered type files and the sawtooth edge pattern is very even. Mine is mildly irregular.
T

Real nice job, David! I like the "lamb's tongues" particularly! Who made your name stamp?
D

me. It looks OK from a distance, but it doesn't stand up to close scrutiny. I guess the irregularities in it help make it harder to counterfeit....that's a joke, of course, since people don't counterfeit things of no monetary value.

It's brass made with notches filed into it. I tracked down reverse letter stamps (individuals) and ground a cheap allen key to a tiny flat to make the serifs.

At the time, I sort of meant to look to have a nice one made, but I sort of go back and forth on this. Do I really want to take myself that seriously and have a professional maker's stamp? The answer pretty much comes up as no. It's a hobby that I want to do well, but it's still just a hobby and I'm still just a hobbyist.
T

Don't sell yourself short! All craftsmen see faults in their work that others don't, that's what makes them a craftsman!
P

Very nice plane. Is English (Euro) beech so different? I can't see the difference. I like the fact it is perfectly quarter-sawn. Is it more wear resistant with face nearest the bark as the sole?
D

The advice in older books (i'll admit that I read little, George wilson relayed it to me) is that the bark side is to be out on planes.

There is a gigantic difference in durability on the flatsawn face vs. the ray side on the sides of the plane (extremely noticeable even in hand sawing and planing).

The ideal orientation of the grain isn't really for any of that specifically, though (if the orientation is wrong and the sole wears fast, you can just true it more), it's to deal with wood movement. Beech is a terribly behaved wood, it's a little bad even when steamed. I'm hoping any twist in this plane will be limited to tiny amounts, and the issue with twist is that it's seasonal. So if you true a plane in the dry season (winter here) and then summer comes around, it will twist out of true. if you true it again in the summer, it will do it again going back in the winter. That's really annoying.

if you can manage to get ideally sawn wood, that behavior is really greatly reduced (even ideally sawn billets like this can move a bit lifting their toes a bit with seasonal change, and then going back. That's not nearly as bad as twisting).

I've gotten to this point by not paying for ideally sawn wood (this wood is $16 a board foot whereas there are beech trees growing all around here that I could probably beg, borrow or steal if I could catch them falling over before they spalt). I've had dead quartered wood on both ends before that looked great, but when viewing from the top, you can see that it wasn't cut with the pith centered along its length......and it twisted badly.

There are other woods that are worse (apple) and I'd bet the steamed euro beech behaves better.

For a jack plane, this much concern may be nonsense, but the person who asked me to make this plane (or gave me specs after I offered when they gave me something I really treasure and wouldn't have otherwise gotten) said they wanted a shorter jack plane that they intend to use as a smoother.

Great work David. You could quite easily "do it for pay" as you often set out.

That's really excellent work. Lovely elegant rear tote and very well defined crisp cuts.
Forget the pro/amateur labels. It's meaningless when the object is made to such high standards.
D

Thanks for the nice comments, gentlemen!