I have just bought some aged Elliot Lucas pincers from eBay. Should pincers have sharpened jaws?

No. You'll cut the head of the nail off, leaving a sharp remnant too small to get hold of.
Superficially similar end-cutting nippers should. Which have you got? 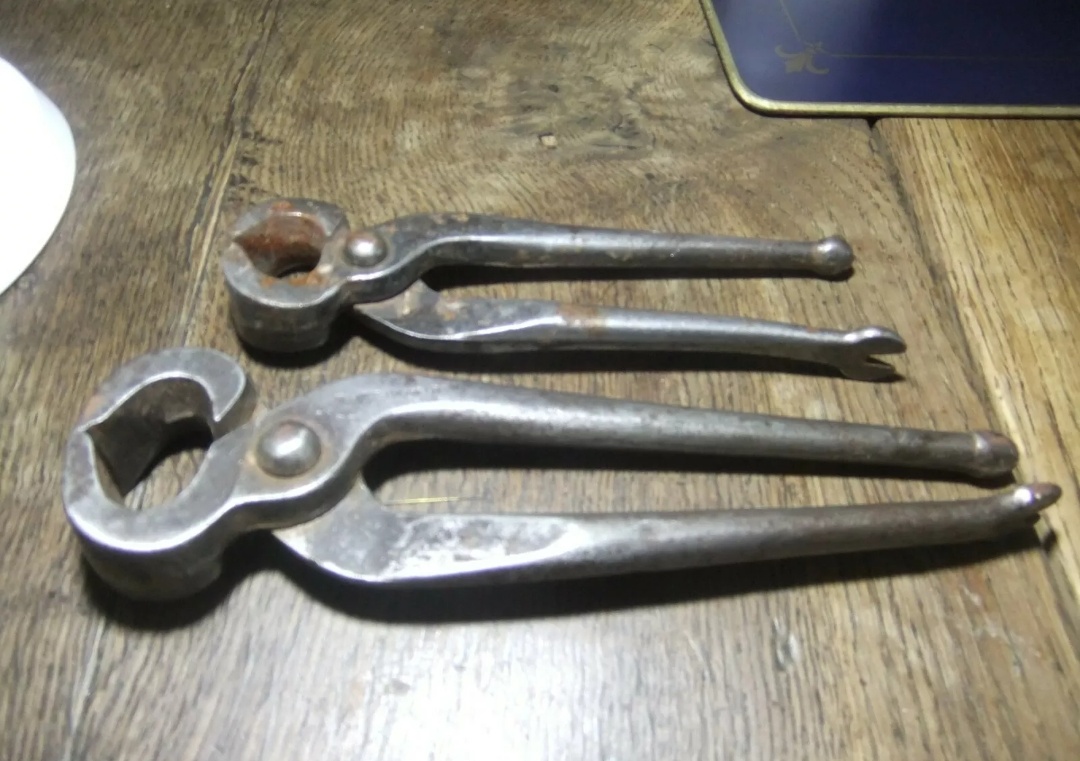 No idea, I thought that they were pincers but didn't know that end nippers existed.

I just want them for hoiking out a few nails from some oak and they were fractionally more expensive than rubbish from Toolstation.

The smaller pair are tighter than the larger paid. May sell one or both pairs of them on when done with, or keep them. It is a tool I haven't needed in 5 years before now.

Those are definitely pincers - they have the distinctive ball and claw. (We could digress onto a discussion about what the ball is for and why some pincers have a cone instead...)

Thanks Andy, so no sharpening needed?

Feel free to digress, I can't add anything but am interested in the topic.

Only if the jaws don't meet properly, or are badly nicked. They have to be "sharp" enough to squeeze under a nail head fairly tight to the wood surface, but not so sharp as to risk cutting the head off. I haven't touched mine with a file etc in 40 years. Keep one, you'll be amazed how often they're useful. I was pulling staples out of oak today with mine, for instance, where the wood yard has stapled on labels.

At the risk of digressing why do some have a ball and others a cone?
J

The claw thing is a nail puller but I've idea about the ball.
P

Having recently started clearing out surplus tools from my workshop I found that I had 7 pairs of pincers and I can't remember the last time I used any of them.

Blackswanwood":iwt0pya3 said:
At the risk of digressing why do some have a ball and others a cone?
Click to expand...

Funny you ask that...

I have my Dad's ones. Given not borrowed! Wouldn't be without them.
The shape allows you to roll out pins/bright nails etc with no damage from leverage.
As above I don't think they are meant as snips or to be sharp. Flat faced and just thick enough to get under a close set head. Inevitably a few get bent being so thin. The wide jaw allows you to roll a pin out so you get mechanical advantage but also pulls the pin out vertically so less damage to any grain.
Clever bit of kit really.

ah, we could have done a deal and left you with only 6!

I have just pulled a few nails out with mine. I would like to use more reclaimed timbers, so like mike suggested they may come in handy for a few upcoming tasks.

powertools":3rsu669n said:
Having recently started clearing out surplus tools from my workshop I found that I had 7 pairs of pincers and I can't remember the last time I used any of them.
Click to expand...

I suppose if you are a modern professional or general power tool user ( :wink: )like a joiner with a nail gun and foaming glue they are no use 99.999 percent of the time.
I recently pinned and glued a few architraves on my house. I can't justify a nail gun or air system so they all get pinned. Then I tap the heads in with a punch, fill and decorate. No doubt a claw hammer would do the job on the wonky pin but using them you can understand why they would be so useful as a dedicated tool a generation or so back to someone pinning a lot of carpentry or furniture makers etc. I still find them really useful but I totally see your point.

My b.i.l. an (English) ex joiner in NZ told me they usually glue their architrave, pinning it temporarily. I've done this and saves a bit of filling and any gaps opening up, but you'd not move it for any reason.
J

powertools":an1q1j4q said:
Having recently started clearing out surplus tools from my workshop I found that I had 7 pairs of pincers and I can't remember the last time I used any of them.
Click to expand...

Probably because you don't use nails. You are missing a useful trick!
Also presumably you don't repair anything - a lot of old stuff uses nails, even high quality.
I don't use hairpins.

I touched my pincers up on the grinder the other day since they'd gotten pretty badly nicked, I think there's a fine balance between too sharp and cutting the pins and too dull and slipping off the pin. Mine get used fairly often, not every day but at least once a week. As Jacob said, you can barely go 5 minutes without picking up a pair when doing restoration work on joinery or furniture.


MikeG.":3baxa3em said:
I was pulling staples out of oak today with mine, for instance, where the wood yard has stapled on labels.
Click to expand...

How many pairs of staples you find on a board often dictates how many times it's been rejected by other joiners. I once had a board which the edge was littered with staples, once I brushed the dust off the surface you could see it was riddled with woodworm, rejected once again!
J

I've always known them as "nail pullers", not pincers.
Pincers are for holding things tight, or snipping them - hence need sharpening - not good for nail pulling.
PS just googled nail puller https://www.google.com/search?q=nail+pu ... 60&bih=511
there's lots of unfamiliar designs! I'm used to parrots beak and one or two others but there are some strange beasts in there.

^^^^ I'd have thought it was more to do with how long the board had been there - the labels are paper and deteriorate, falling off so get replaced. The longer they were there the more likely to have worm. Just a thought.

phil.p":1f1muaad said:
I'd have thought it was more to do with how long the board had been there - the labels are paper and deteriorate, falling off so get replaced. The longer they were there the more likely to have worm. Just a thought.
Click to expand...

Papers that are on the side of the planks we get are notes of who to ship them to, they quite often have the business names on them or some kind of identifying mark. Generally, I don't think the companies we buy off hold onto stock very long in their own depots.