Some people might remember a thread last year about a scribing tool I’d designed and was hoping to sell.

It was a very useful exercise for me and I learnt from the justified criticism.

I have expanded the range and have sold over 160 so far which is a more than I ever anticipated including some overseas. I’ve had some really encouraging reviews and it seems to be a really liked tool by site fitters.

I’ve been working on a new idea which I’ve finally got to the stage of photographing and adding to my website.

I have accumulated about 30 Record 135 sash clamps over the years and there are 2 issues I have found with them. The first is the need to hunt around for something to protect the work piece, the other is that they are forever toppling over onto their sides (normally when I’m gluing up a 2” thick sold top!).

I’ve come up with an idea which gets around both these problems and is robust enough to stay to be a permenant fixture on the clamp.

It’s very simple in design with a c section piece of mild steel which sits over the shoes of the clamp and is fixed with 2 x m5 grub screws. It’s a very strong holding system. A ply pad is then screwed onto the steel.

I’ve sprayed the steel with enamel paint which matches the Record colour, the birch ply is clear lacquered sprayed so any glue can be chipped off (that’s the idea anyway).

Like the scriber it’s an idea that might or might not float (you have to try these things!). I’m sure the price will shock some people but it’s what I need to charge for it to be viable.

I’m interested in people’s thoughts.
Thanks, Phil.
(I'll get my hard hat on!). 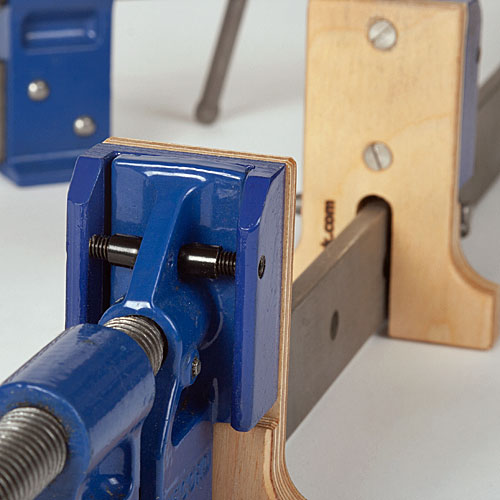 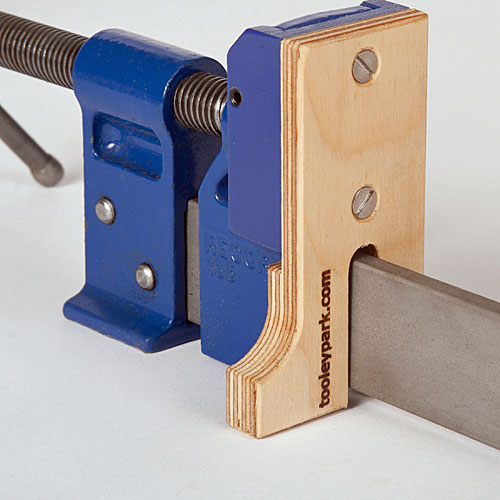 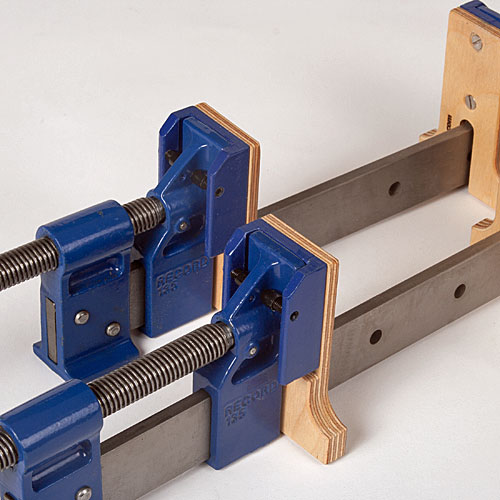 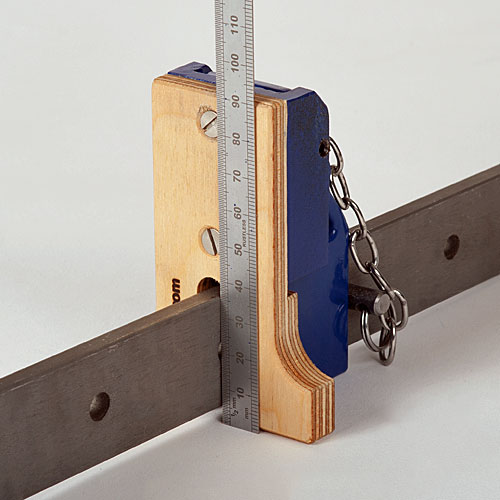 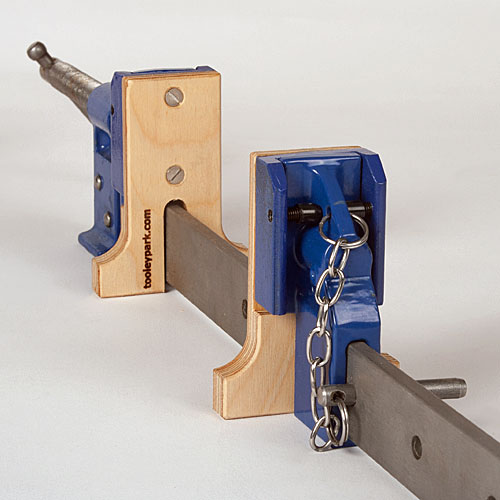 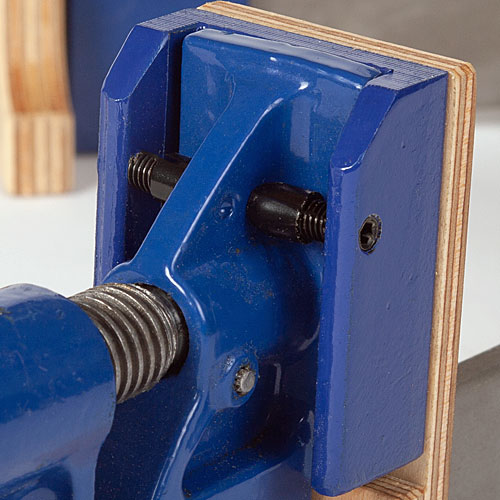 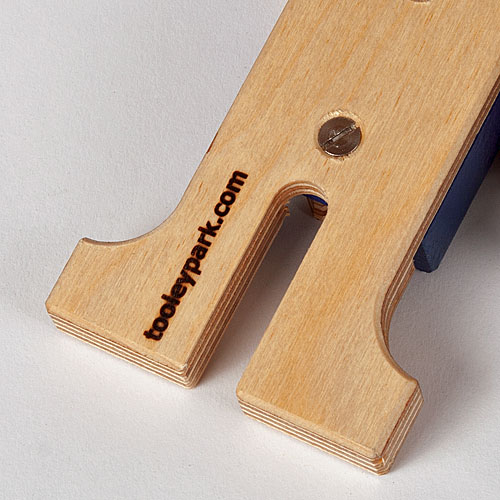 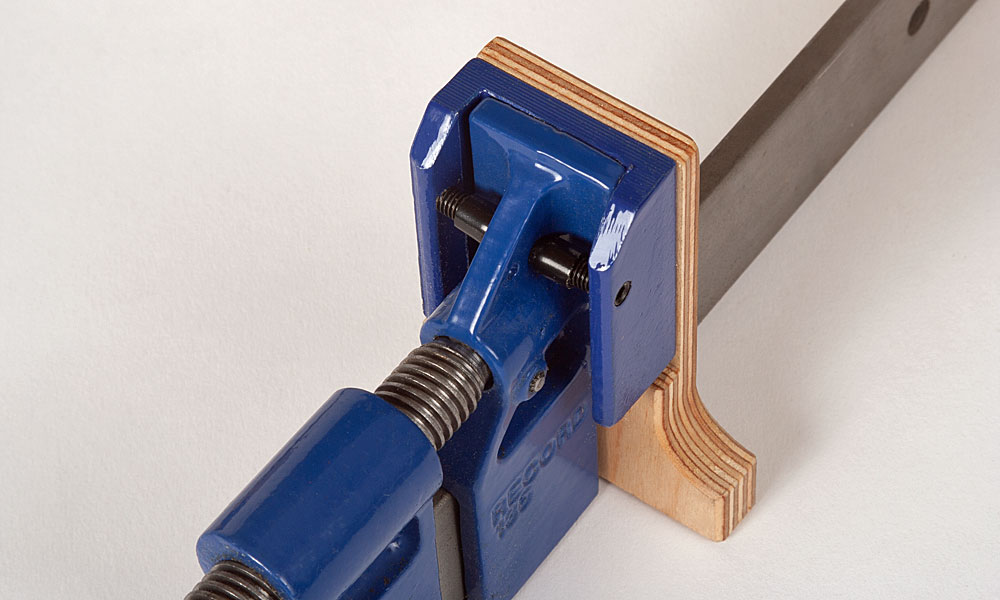 Nice, have you thought about using Nylon or Delron in place of ply, could be an option/alternative for you and just as easy to manufacture.
Good luck.

That is a great idea. The clamps I use already have stability lugs, so I don't have that problem. The problem I do have is finding something to protect the workpiece and to pack out the space sometimes. It always falls out. Could you have a version which has strong magnets to hold on to the clamp but different thickness options which stack. You could have a generic design which would fit most clamps. Easy to swap between clamps and very simple.
B

I like @Sandyn suggestion of magnets.
I have a couple of the thin bar sash clamps. I used offcuts of t and g pine ( groove side up with the clamp bar sat in the groove ) glued together at 90, one on top of the other. These are extremely stable.
Ive seen similar wooden pads used on t bar clamps, with the t section cut out so the pad slots onto the t bar and the pads weren't going to fall off.
F

Good idea, I would agree it could be improved by using Nylon or similar for the pads. I would think that would be cheaper too, and last longer. Also I would think most things that would be likely to get on them will readily peel off Nylon. What is the price out of interest? I am sitting down
P

Thanks for everyone's comments. Good idea with the nylon but it would have to be thick enough not to snap off if the edges of the pad were caught on something. If I were to use 10mm nylon (having just done a quick search) it would be roughly £10 a stand just on the nylon.

I'm selling 2 versions, one with shaped sides (shown here) but another with a rectangular pad as a cheaper option.
The shaped pads are £8.50ea, rectangular £7.50ea plus postage.

Adding nylon would at least double the price.

What do you think of you being able to buy the clamp part separately so you could make your own pad.
I'm thinking more about the customer being a professional set up where time is the main issue but perhaps the amateur would be interested in making their own pads using nylon or whatever they wish.

Birch ply is a pretty durable material and with a bit of wax on top of the spray lacquer that will prevent any glue sticking. It should last for years.

I agree it is a total hassle holding little clamp blocks in place, but I think you are over engineering it. I use ply blocks with a strong double sided tape to hold them onto the clamp foot.
They do look very well made
P

That's what I have done in the past Hornbeam but they eventually fall off (half way through a glue up sometimes!).

I guess you could say they are over engineered but the idea is they are a permanent fitting and will stay with the clamp for it's life span (and these clamps as we know last a long time).

I have always had the philosophy with kit to buy good quality that will initially cost more but will last me out and someone further down the line will be able to use it as well.

Same for when I make stuff, I'm trying to produce a good product that will last!
Phil.
I

The use of one or two small rare earth magnets to hold sash clamp blocks appeared in a FW methods of work some years back. How simple are good ideas (why didn't I think of it first!). The magnets cost only copppers each. It works a treat on my chinese? cheapies, but did need the odd casting mark grinding off the clamp face, to stop the block moving about. On a flat surface, grips like ****. With cheap sash clamps sometimes the clamp face is not at 90 deg to the bar, so they can slip or spring. This can be easily corrected by shaping the block and leaving it attached.