I've recently acquired a collection of woodworking bits and bobs due to a friend of a friend passing away. I hadn't planned on discussing anything as it's all pretty normal stuff.

There was a grim and rusty Stanley 4 1/2 in the collection. I was tempted to throw it away as it was so rusty, the handle was broken and most of the paint had deteriorated. However I gave it a chance. Took about a week of bits of time at lunch breaks.

I favour a limited amount of work, but this was so bad I had to be quite thorough. Metal was soaked in vinegar, the handle glued, iron ground, honed on the India stone (no stropping), handle & knob refinished, coat of paint, sole abraded on 60 grit wet and dry on a piece of MDF, brass polished.

After all that the plane is pretty worthless. The sole is very pitted but is level enough to work, I could also do with bedding the threaded rods that hold the handle and knob on in some araldite as the rust had worked its magic. Works like a dream though! I admit, a piece of Euro Redwood is not going to trouble any half decent plane, but the cap iron did not clog, it fed well and left a very bright finish.

Should of done a "before", but as I mentioned, it was a bit of a whim. 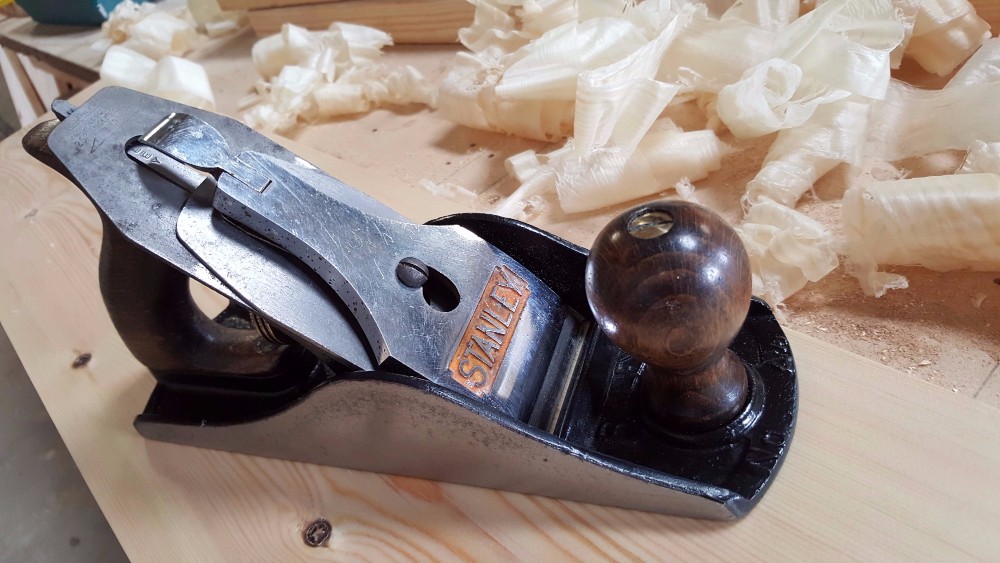 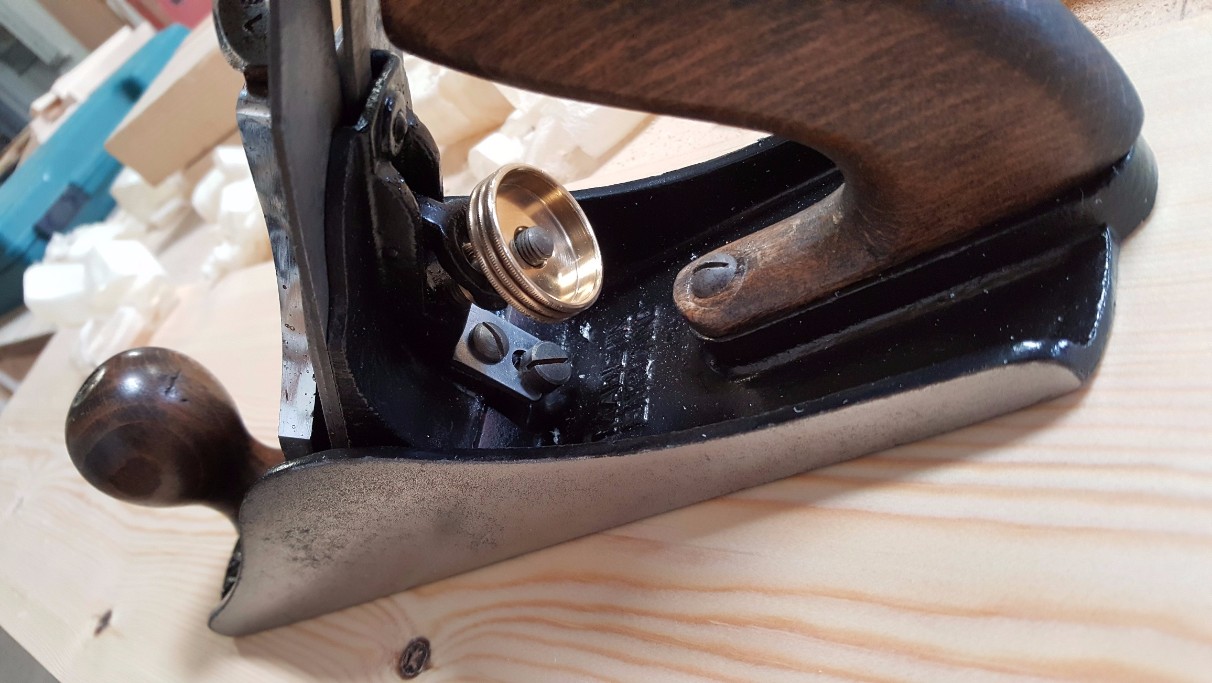 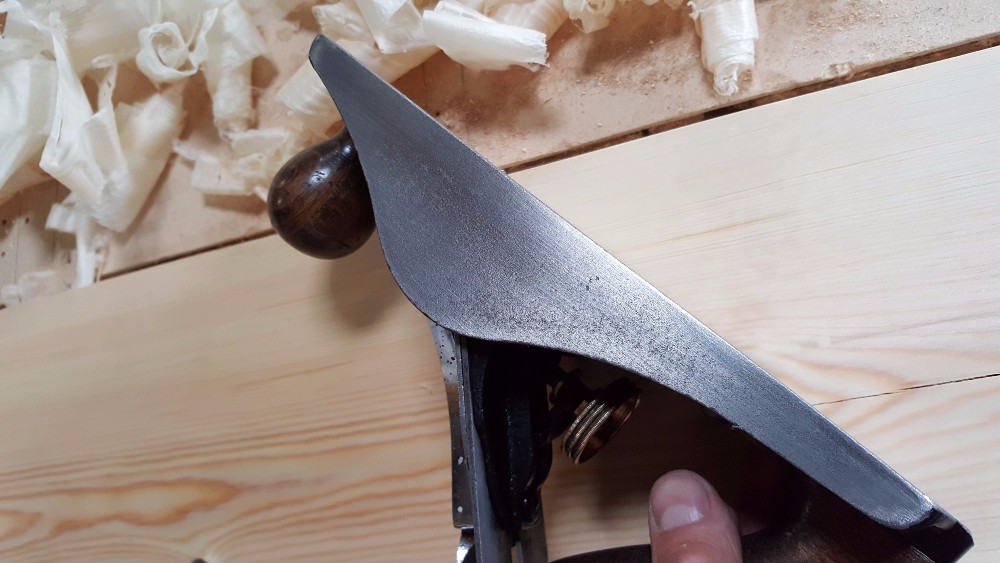 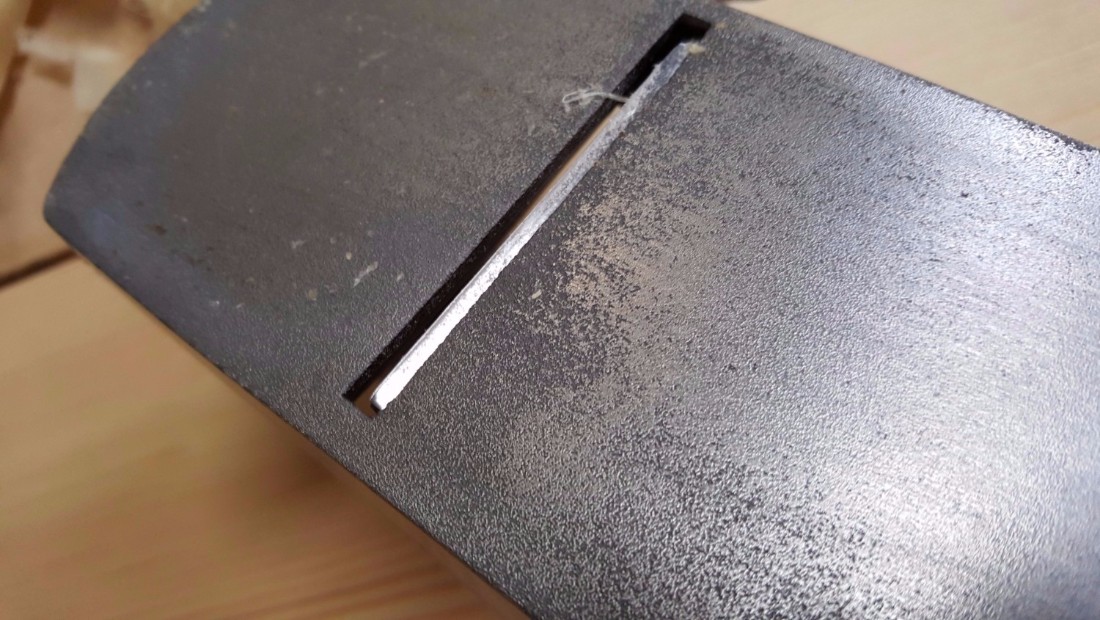 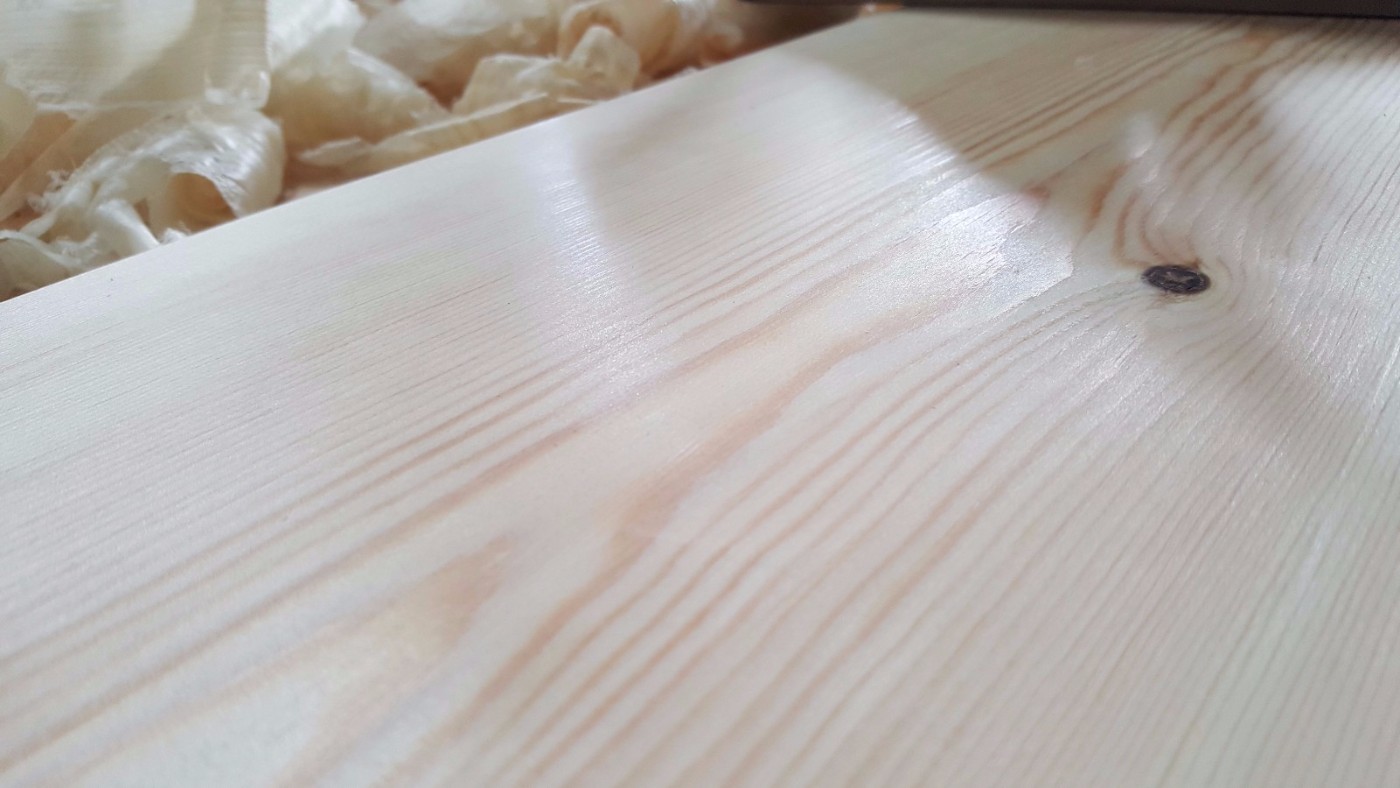 I am also a big fan of that. My favorite smoother is a type 20 Stanley, supposedly junk.

Your results look excellent, both the restore and the quality of its work.
O

Great job there. I like to see old tools rescued. How it works is the important bit, not how it looks.
BTW I have a No7 with some very ugly pitting on the sole. It is still a great worker so I hang on to it.
Regards
John

I've not seen a plane with a sole as pitted as corrugations ...
G

Thanks Gents. There was a #4 in there as well. A canditate for a minimal ammount of work, great patina on it. Will try and post some before photos if I get to it.
N

looks good - particularly the paint, what did you use?
E

Even though so many were made there are a finite number of planes out there so always good to see a plane restored and in use. Let's hope future generations will still be using them.
S

There is an ancient saying, attributed to the Babylonians :-

“The gods do not deduct from man's allotted span the hours spent in fishing.”

So it follows for those who restore the Stanley 4½ bench plane; a peerless plane for all seasons, made in heaven. The rust and goo may be considered balm for the soul. Great job, made me smile, well done that man. =D>

Great work - always worth saving a plane from destruction!

Is this the "before" photo you forgot to take, by any chance? 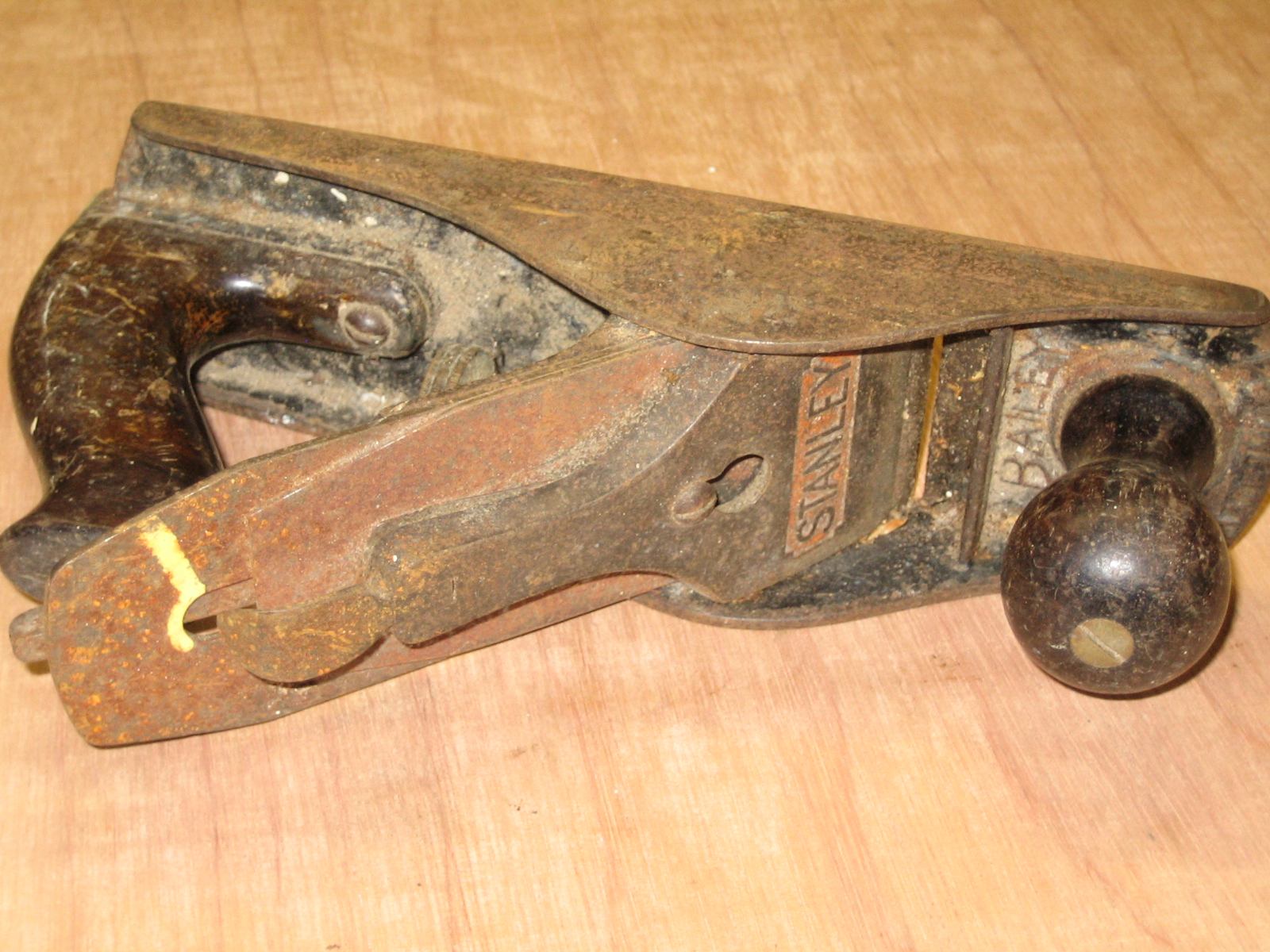 Nabs, after a bit of research I went for Rustoleuem. As the casting was quite bad I used their anti-rust primer followed by their satin black spray paint. Doing so highlighted what a waster of money the process was, however most persuits are a wate of money but fun! I have previously used Hamerite, I feel the Rustoleum is a better product, others may have a different expereince.

Alan, this was very much on the cusp, made me think of this video https://www.youtube.com/watch?v=RgrJElGOMMg

, very good Sam. I am blessed 'tis tru. I would not want to bathe in the vinegar, post rust removal, reminded me of the contents of a ancient bird bath https://youtu.be/tlEPuQ-Oo0Q?t=58s
G

Andy, very close! Thankfully the cutting and cap iron seemed protected from the worst of it. The plane was the colour of the iron in your shot, the woodwork was a touch worse and the break in the handle was between the screw at the front and knob at the back.

I have heard from long time users that QD90 is superior to Hammerite.

G S Haydon":3ay9e101 said:
Andy, very close! Thankfully the cutting and cap iron seemed protected from the worst of it. The plane was the colour of the iron in your shot, the woodwork was a touch worse and the break in the handle was between the screw at the front and knob at the back.
Click to expand...

I guess this isn't your "after" picture then - 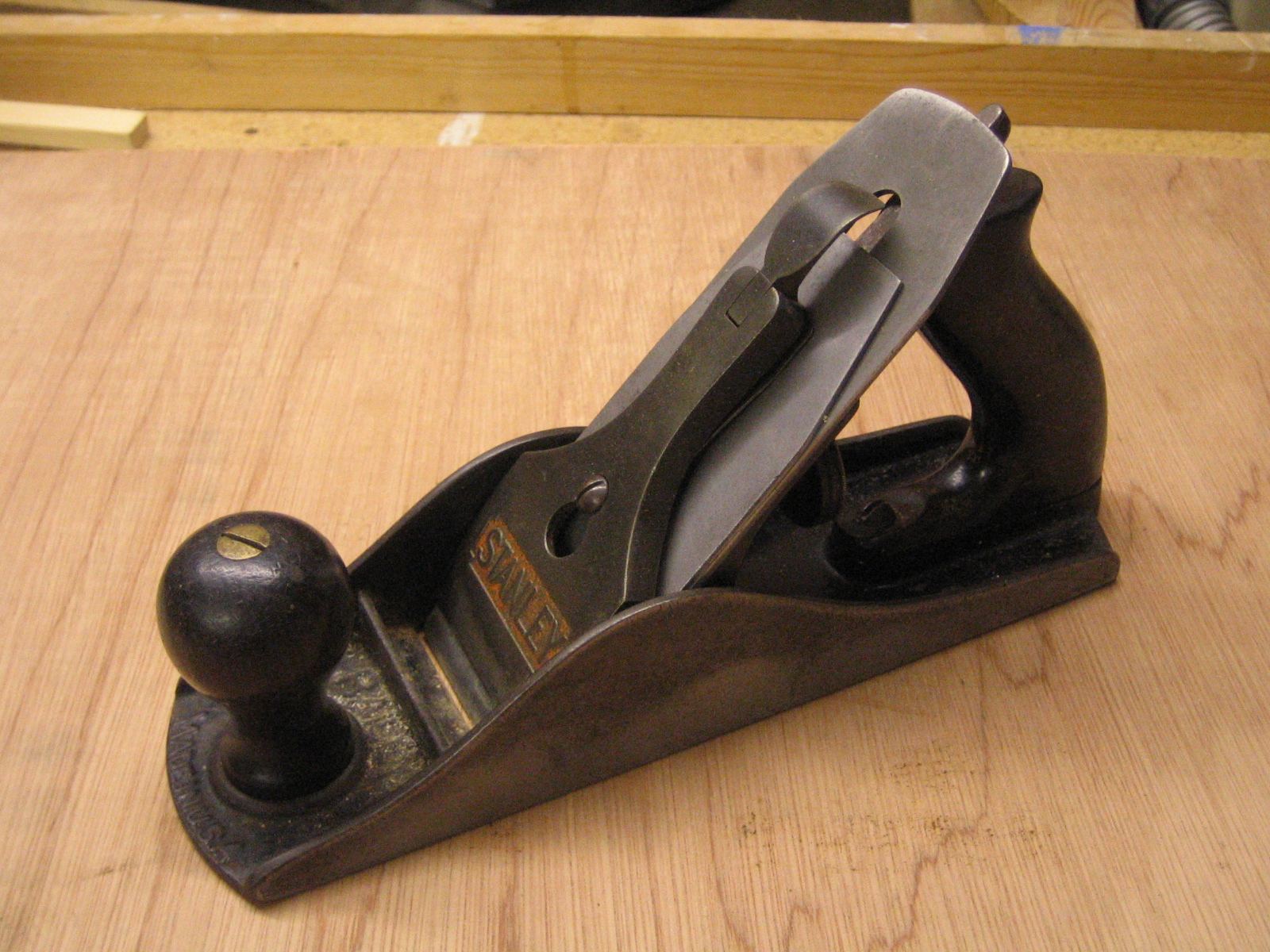 - but it's another example of what can be done!

Super work, great to see the standard Iron retained, after the rust in your photo others would've thrown the towel in. I much prefer the mellow tones of your example. I'm hoping the #4, if I get to it, will look much more like your example.

If you find the pits going rusty put some super glue in them.
I have a Record 4 1/2 stay set with a few deep ones and its the only thing that stopped it for me, the rust pushed epoxy out!

Nothing wrong with that plane now! Good save Graham =D>
R

£5.50 for a slice of heaven – bargain. After the 4½, when ‘real’ work needs to be done, I mean big, awkward, tough pippers which defy both kind words or cussing; you reach for the 5½. I own two, one gifted from my venerable Grand Pa and one older than he. Scrub plane first; then the 5½, from thick to wispy thin as required. Job done; and, all they ever ask is a lick of oil on the bottom, a sharpen every once a while and a drop of oil, here and there, after a clean up. A workhorse, a treasure and a joy to use, in anger with almost any wood you care to name.
D

That's a great idea, I will try it.